Women who use the female libido pill, Addyi, no longer need to avoid alcohol, regulators have declared.

Previously, Addyi came with a warning to stop drinking two hours before taking the pill, or to skip the pill if they’d had a few drinks.

But on Thursday, the US Food and Drug Administration found studies conducted by the drugmaker, Sprout, showed no need for such a warning.

Sexual health professionals hailed the shift as a win for women. 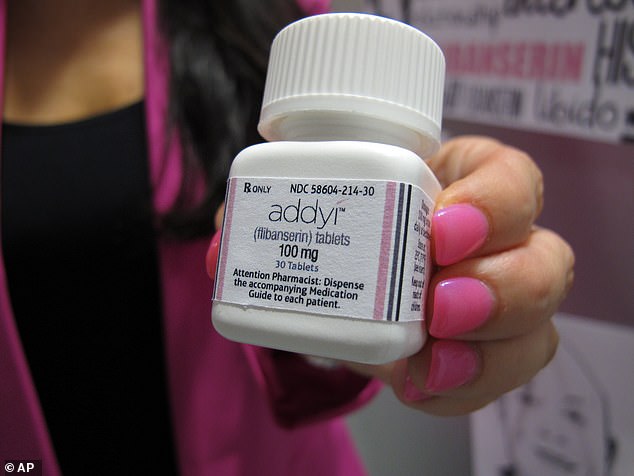 The little pink pill was first approved in 2015, and remains the only FDA-approved treatment for hypoactive sexual desire disorder (HSDD) in pre-menopausal women.

Unlike Viagra, which increases blood flow to a man’s penis, Addyi (the brand name for flibanserin) targets the brain with similar effects to an antidepressant.

It boosts dopamine to gear up motivation and excitement, and dulls serotonin, the neurotransmitter which makes us self-conscious.

The drug has plenty of critics: a significant portion of doctors say we do not know enough about female sexual desire to ‘fix it’ with one pill.

The American Sexual Health Association, a 100-year-old nonprofit source of sexual health information, says HSDD affects a staggering one in 10 women – and ASHA CEO Lynn Barclay told DailyMail.com visits to the HSDD page on their website have been rocketing in recent years and months.

However, many health professionals question whether HSDD is real.

And there is growing concern about antidepressants in general, and how difficult they can be to wean off.

This skepticism has created fertile ground for cannabis entrepreneurs, who thrive in grey areas of medicine, to market marijuana as a ‘natural’, less risky solution for women lacking libido.

But plenty of sexual health practitioners and advocates say they are just happy to be able to provide women some tangible relief without caveats.

‘Women are really looking for information on this,’ Barclay said.

‘I think, unfortunately, women think that what’s happening to them only happens to them, and that there’s nothing to be done about it. But Addyi might be something.’

The reason an alcohol warning was slapped on Addyi in 2015 was because Sprout had not adequately studied the drug’s interaction with alcohol.

As a result, the FDA allowed the drug onto the market but with a warning, and ordered the firm to conduct three post-approval studies, which is fairly common with drug and device approvals.

The first lasted a week, with 24 women taking either Addyi or a placebo, and on two of the days some had a couple of alcoholic drinks with dinner, then took their pill a couple of hours later. Sprout wanted to see if there was a risk of fainting; in this scenario, there wasn’t.

The second involved 96 women, who had three drinks, didn’t eat much, then took Addyi in the morning. Again, there was no risk of fainting and blood pressure was stable, but some felt faint.

The third saw 64 women take Addyi or a placebo for 10 days. On four of those days (days four, six, eight and 10) they had a couple of alcohol drinks varying hours before taking their pill. Again, there were no clear side effects.

‘Some women drink every day or almost every day, but the studies only include women drinking one or two drinks on some days but not others,’ Dr Zuckerman told DailyMail.com.

‘As a result, we don’t know what happens if a woman drinks daily or almost daily, whether or not any of those days are what would be considered excessive drinking.’

But the bigger question that still remains, Dr Zuckerman says, is whether Addyi really works well at all.

Sales have been disappointing, driving Sprout to half the price in summer 2018.

Dr Zuckerman believes this may have something to do with the fact that, even in the clinical trials, the drug did not work much better than the placebo.

‘The original Sprout studies only found a greater benefit than placebo when they changed the way they asked women to report their frequency of “satisfying sexual experiences”, using a less accurate measure,’ Dr Zuckerman said.

‘We think the poor sales of Addyi reflect the fact that it isn’t effective (in addition to the outrageous cost and concerns about alcohol).

‘Women’s loss of libido is an important health issue, but it might or might not be something that can usually be fixed with medication.

‘Taking Addyi every day is inconvenient and expensive.

‘After the placebo effect wears off, why would any woman keep paying for a product that she realizes doesn’t actually work?’