A woman who suffers from a rare condition known as ‘butterfly skin’ takes nothing more than paracetamol to handle the pain.

Myra Ali, 31, from Solihull, West Midlands, was born with dystrophic epidermolysis bullosa (EB), which causes her skin to break and tear as easily as a piece of paper.

She endures pain on a daily basis and is always covered in bandages, taking an hour and a half to put on every morning.

When she was younger, Ms Ali had full use of her hands. But over time, scar tissue between her fingers has fused them together making them ‘mitten-like’.

She has had surgery, lasting five hours, almost every year since she was a child, and several cosmetic procedures, including a non-surgical nose job and fillers. 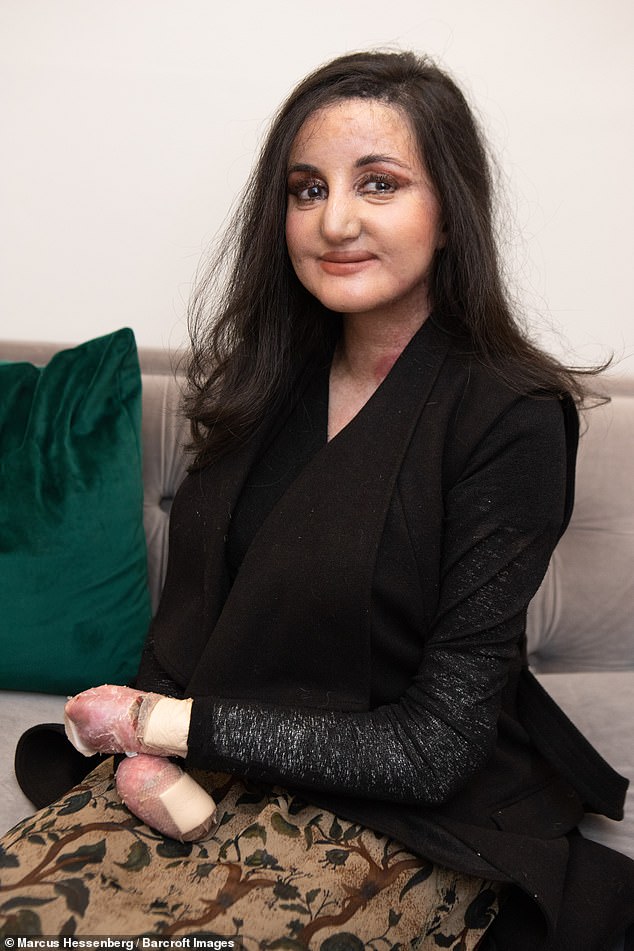 Myra Ali, 31, from Solihull, West Midlands, was born with Dystrophic Epidermolysis Bullosa, which causes her skin to break and tear as easily as a piece of paper. Scar tissue between her fingers has fused them together making them ‘mitten-like’ 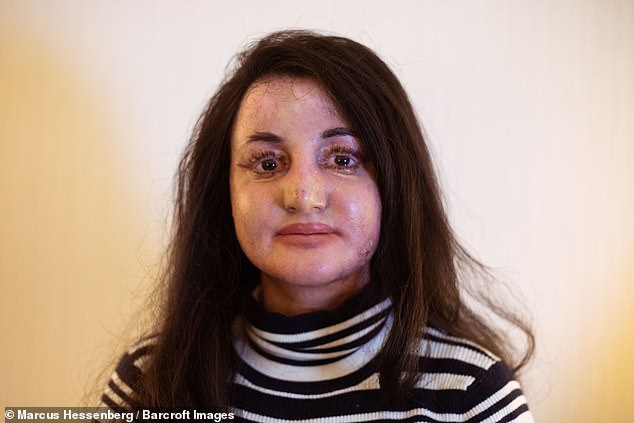 Ms Ali has had surgery, lasting five hours, almost every year since she was a child, and several cosmetic procedures, including a non-surgical nose job and fillers 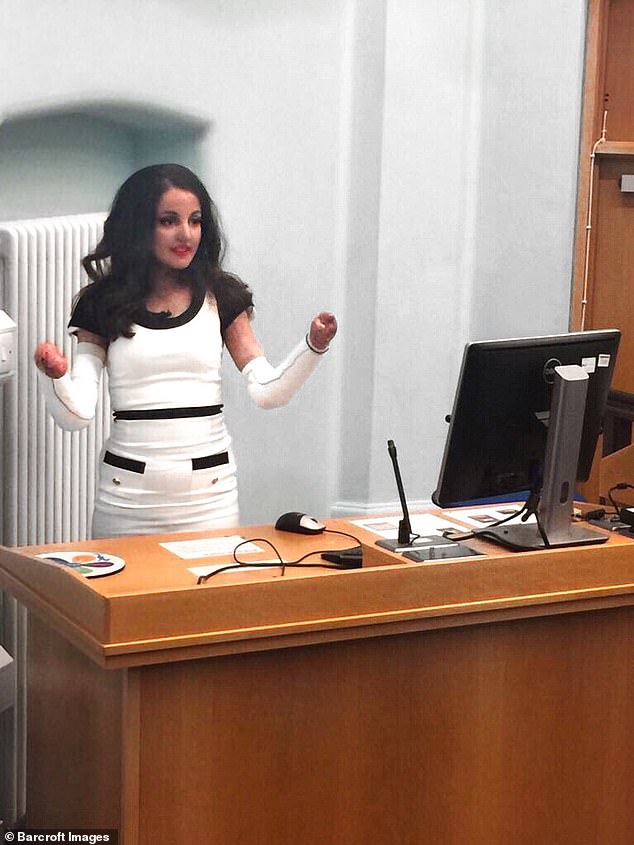 Ms Ali must dress her limbs before starting her day job as a translator for the Birmingham Women’s and Children’s Hospital NHS Trust. She is also a motivational speaker (pictured)

EB, affecting one in 50,000 people worldwide, occurs due to faulty genes, which can be inherited or occur spontaneously, and there is no cure.

Ms Ali said: ‘My skin is really fragile and it can blister and tear quite easily.

‘The bony areas of my body are worse affected – like my shoulders, my arms, my hands, knees and feet, and they’re always bandaged.’

‘I would say I am in pain most of the day. Whenever I take pain killers it helps ease it, but the pain doesn’t really ever go just because of the nature of the condition.

Ms Ali was diagnosed with the condition, which affects one in every 50,000, when she was a child

‘There are many people who take higher strength pain killers and it does help them, but for me personally I would rather not have the side effects that are associated with higher pain killers.’

Ms Ali must dress her limbs before starting her day job as a translator for the Birmingham Women’s and Children’s Hospital NHS Trust.

Relying on a roster of nurses that come to her home, as soon as some wounds start to heal, new blisters and breakages appear.

Ms Ali said: ‘I wake up, I have pain killers, I have a shower and I have a dressing change and I will always be slightly rushed because the dressing change takes about an hour and half and then I get to work.

‘I have a few different nurses who come on different days but they all know about my condition and what is involved with a dressing change.

‘I get to know the nurses and they become like friends.’

Ms Ali’s first surgery on her hand was eight hours where the surgeon opened the whole hand. 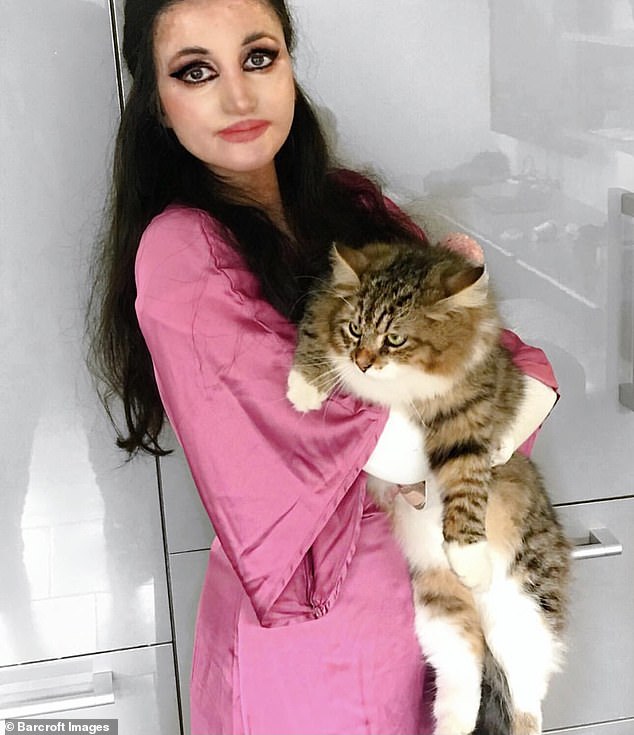 Ms Ali has surgery every year or two, including on her eyelids which become scarred. There is no cure for the condition, which is occurs due to faulty genes 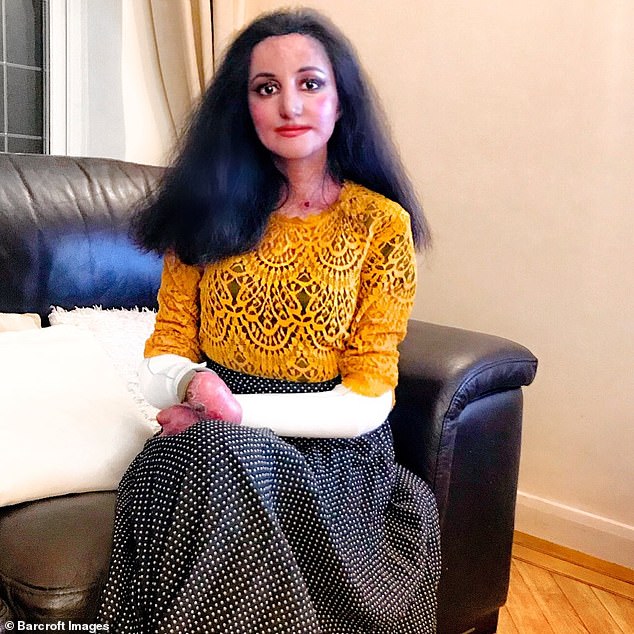 Ms Ali said the bony areas of her body are worse affected – the shoulders, arms, hands, knees and feet

‘But now my surgeon releases the thumb or a few fingers and that helps me get some dexterity back,’ Ms Ali said.

‘I have eyelid surgery every couple of years so my eyes close better because the eyelids are scarred and at night the surface of the eye is exposed so I have skin grafting on the eyelids.’

In spite of the many medical surgeries she has had, Ms ALi has also had several cosmetic procedures, including a non-surgical nose job and fillers.

She said: ‘There is no extra risk with having EB and cosmetic surgery. The only risk there is, if you are in the wrong hands, your skin could blister.

‘My skin has never reacted to any products or procedures luckily so I have been fine so far.’ 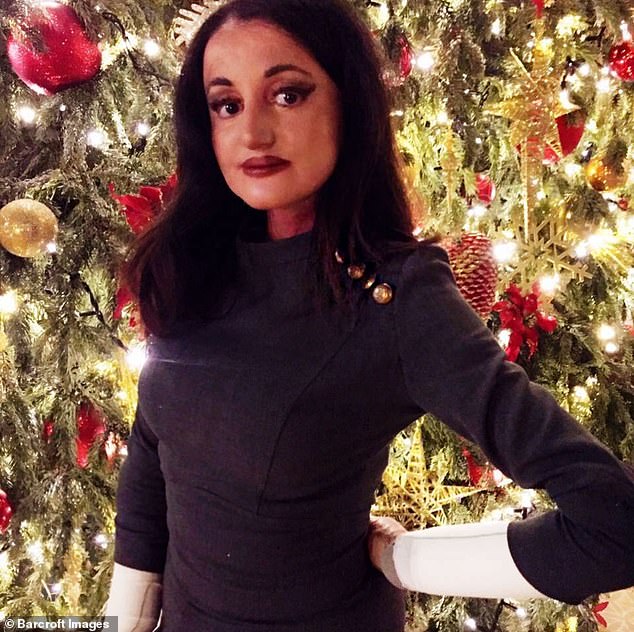 Ms Ali celebrates her beauty and uses her Instagram account to inspire others, saying her condition does not define her 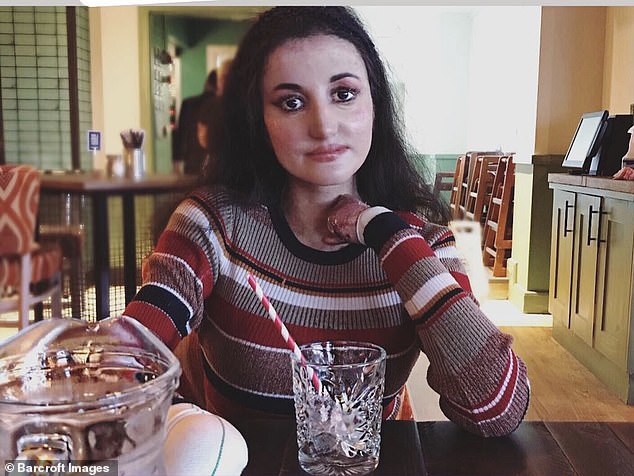 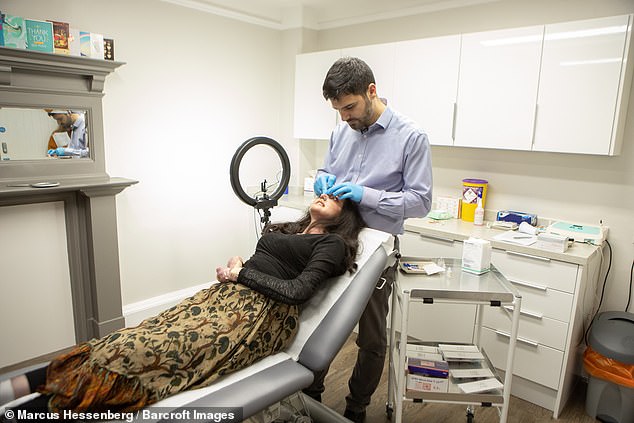 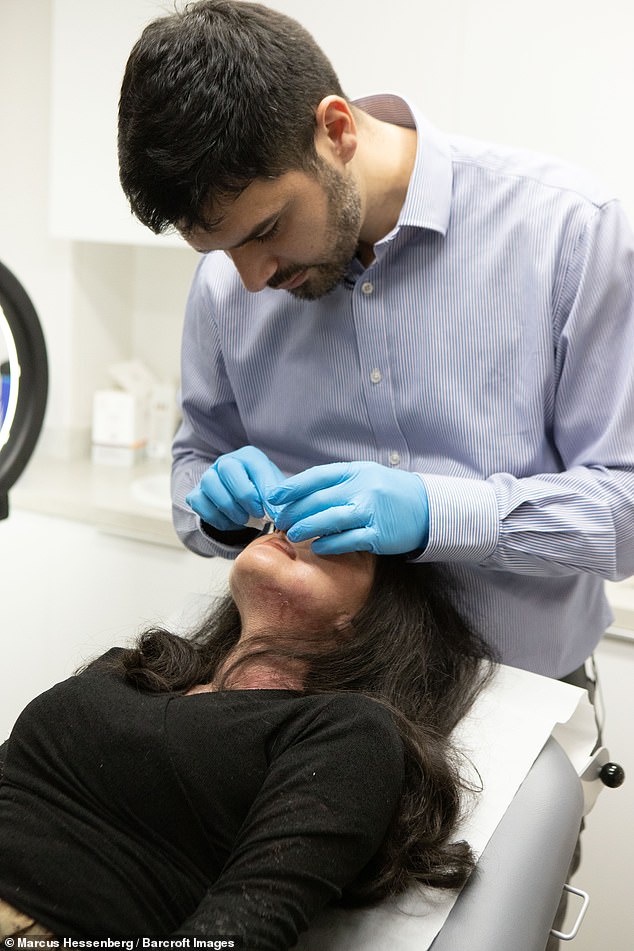 Cosmetic procedures, including a non-surgical nose job and fillers, have boosted Ms Ali’s confidence in a way that medical procedures have not

WHAT IS EPIDERMOLYSIS BULLOSA?

Epidermolysis bullosa (EB) is a general term used to describe a group of rare, inherited disorders that cause the skin to become very fragile.

Any trauma or friction causes patients’ skin to blister.

It affects around one in every 50,000 people worldwide.

Around 40 per cent of sufferers do not survive the first year and most do not live beyond five years old.

The three main types of the disorder include:

Most cases are obvious from birth.

EB occurs due to faulty genes, which can be inherited or occur spontaneously.

There is no cure.

Treatment focuses on relieving pain and treating complications, such as infections or skin cancer.

Source: NHS Choices and the National Organization for Rare Disorders

Ms Ali said the cosmetic procedures, which she has under the supervision of Dr Ayad Harb, a plastic surgeon who has worked with burn victims, have been a big boost for her self-esteem.

She said: ‘It’s definitely enhanced my confidence and also it has made me feel like my EB doesn’t stop me.

‘Normally I have procedures done which are like hand surgery or eye surgery, which are done in an NHS hospital but when I come here, I am not coming here for my EB, I am coming for myself.

‘I do want people to see that someone with a difficult condition is perfectly capable of living a normal life and they are not defined by their illness.’

Ms Ali enjoys motivational speaking and has spoken for EB charity DEBRA at gala dinners and hospitals and about her condition.

She also uses her Instagram account to inspire others and prove that having a skin condition doesn’t prevent her from celebrating her beauty.

Ms Ali said: ‘There are many people all around the world who contact me on Instagram, either they have health conditions or they’re going through a bad time.

‘They tell me that they have gained a lot of strength from seeing what I do.

‘I have a very difficult condition but so do others, and some people have even worse conditions than me and I just want to get on with life.’

‘I have had this condition for 31 years and I went to a really good university and I graduated. I am showing that in difficult position you can have a good life.’