The Viscountess of Weymouth has shared a glimpse at her lavish life as the wife to the heir to Longleat House in Wiltshire.

The philanthropist and chef splits her time between London and the sprawling Elizabethan stately pile in Wiltshire’s famous safari park Longleat with her husband, the son of the 7th Marquess of Bath, and their two sons, John, 4, and Henry, 1.

And the mother-of-two’s Instagram account, to which she shares regular updates with her 30,000 followers, boasts a life of opulent dresses and glamorous dinner parties in the mansion’s stunning rooms, contrasted with wholesome days exploring the wildlife park, and helping to feed the 500 animals spread over 9,000 acres.

Emma, who will become a marchioness when her husband assumes the title held by his 86-year-old father, Alexander, gave birth to her first child, the Honourable John Alexander Ladi Thynn, in October 2014.

In December 2016 she welcomed his little brother, the Honourable Henry Richard Isaac Thynn, via surrogate at a private clinic in West Hollywood.

The couple revealed at the time that their choice of surrogacy was the result of a terrifying brain illness suffered by Emma during her first pregnancy in 2014, which prompted doctors to warn that having a second child could kill her.

‘It was one of the most incredible gifts I could ever receive,’ she previously told the MailOnline.

‘I’m so grateful. It is a miracle to have Henry, my second beautiful boy, here in the middle of Wiltshire via California. I have been asked by so many people about it, and I cannot recommend it more as it gave me my second son.

But she revealed she is keen to keep her sons grounded, and previously said: ‘It’s important for them to be exposed to a variety of friends and experiences.

‘They go to school in London [the family divides its time 50/50 between Longleat and the capital] where they meet folk from all walks of life. I think that’s the key.’

Emma’s pictures show that she regularly enjoys nights out with the likes of Lady Kitty Spencer, who is godmother to one of her children, Vogue British editor-in-chief Edward Enninful, and Made In Chelsea’s Mark-Francis Vandelli.

Emma grew up Emma McQuiston in Kensington, daughter of English socialite Suzanna McQuiston and Chief Oladipo Jadesimi, a Nigerian oil magnate who gave her away at her wedding. 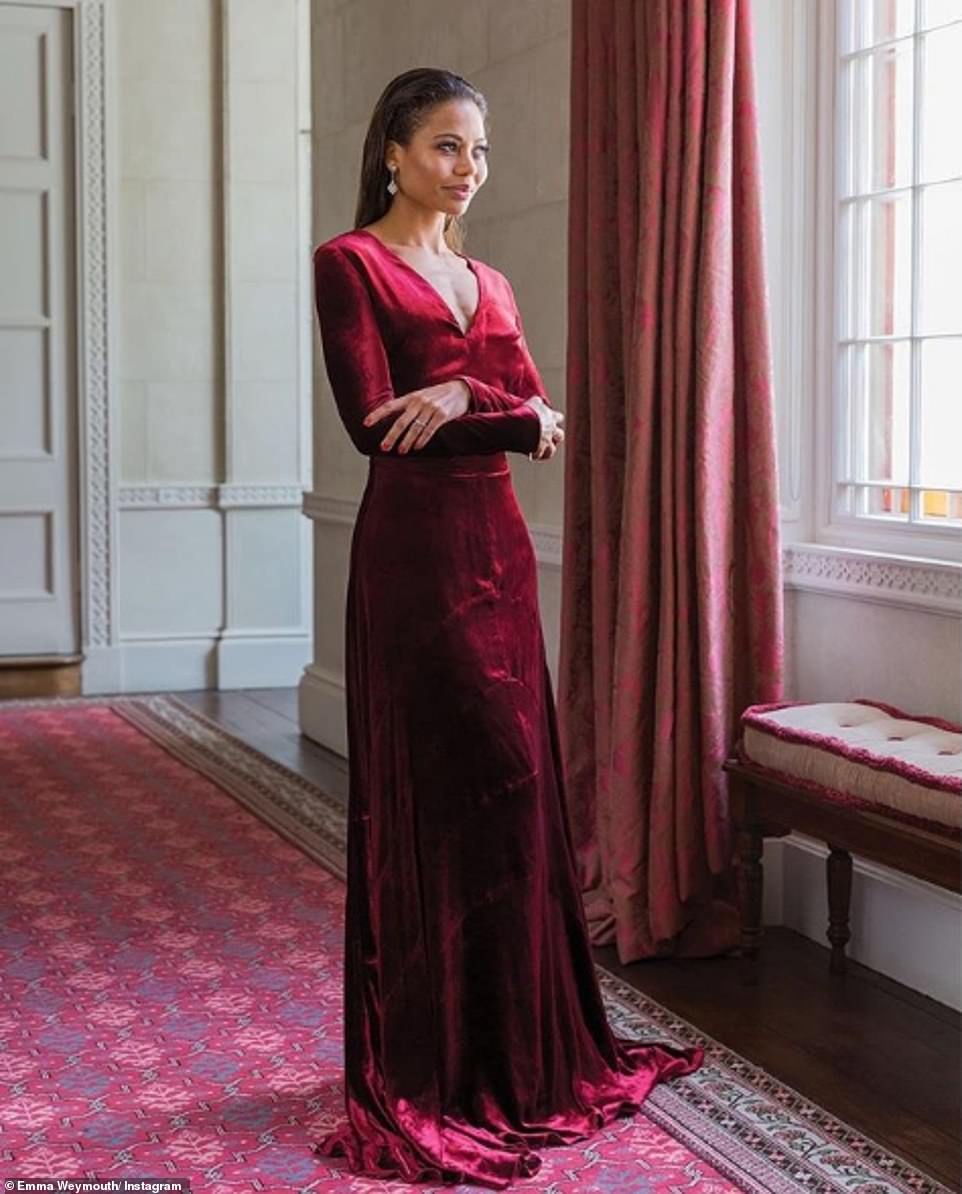 The Viscountess of Weymouth shares regular glimpses at her lavish life as the wife to the heir to Longleat House in Wiltshire on her Instagram account. The model, who has walked for D&G, is seen dressed in a red velvet gown as she poses in her grand hallway overlooking the park, which is decorated with velvet curtains, a coordinated window seat and a Persian-style rug 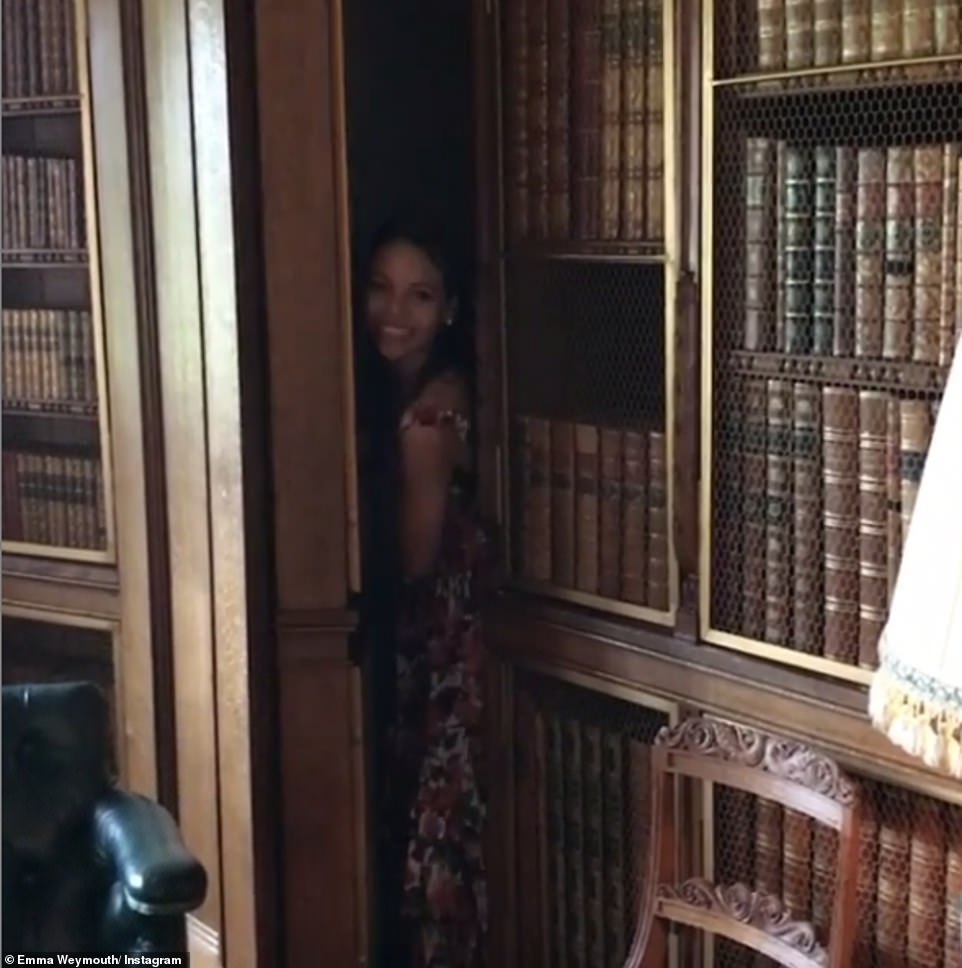 The huge house even boasts a secret bookcase door which leads to a secluded room, boasting floor to ceiling rows of novels and a library style decor. Emma shared a playful boomerang shot as she revealed the surprise room to her followers online 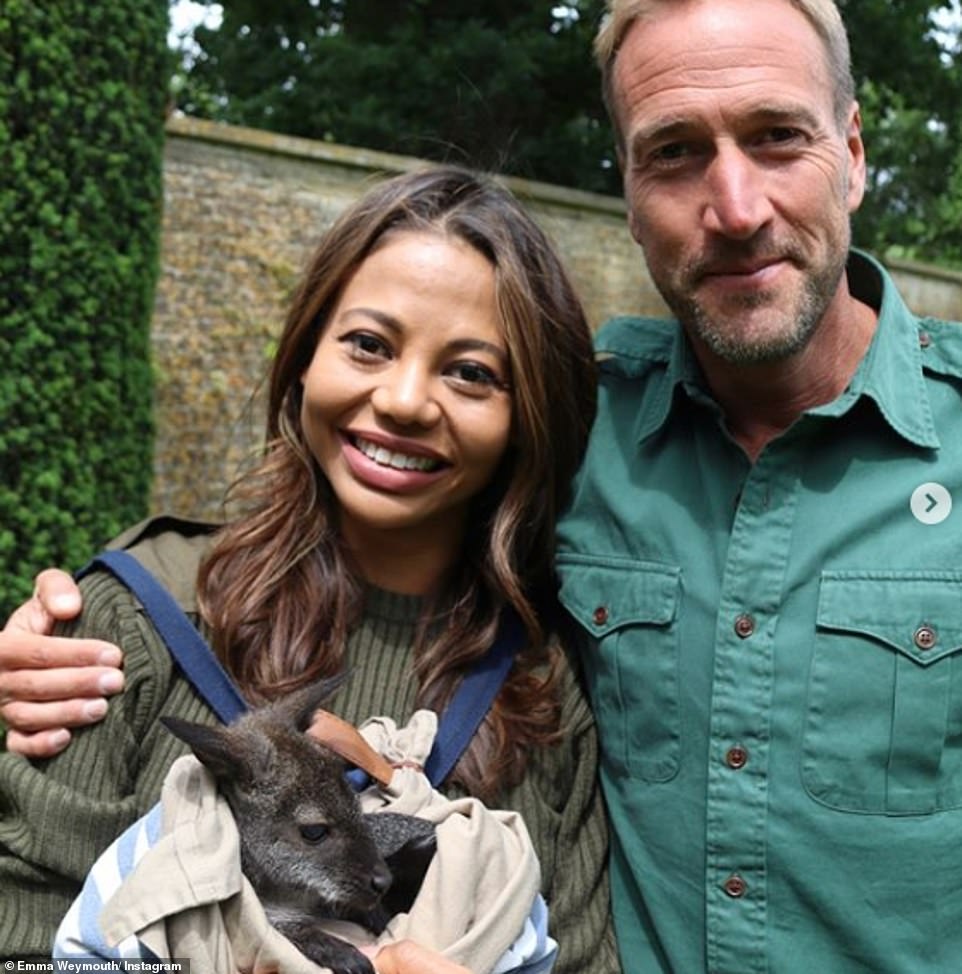 An avid animal lover, Emma shares regular updates on the safari park’s inhabitants, and revealed recently that zookeepers had saved an abandoned baby kangaroo. She posted a picture alongside the little fellow, who she introduced to wildlife presenter Ben Fogle 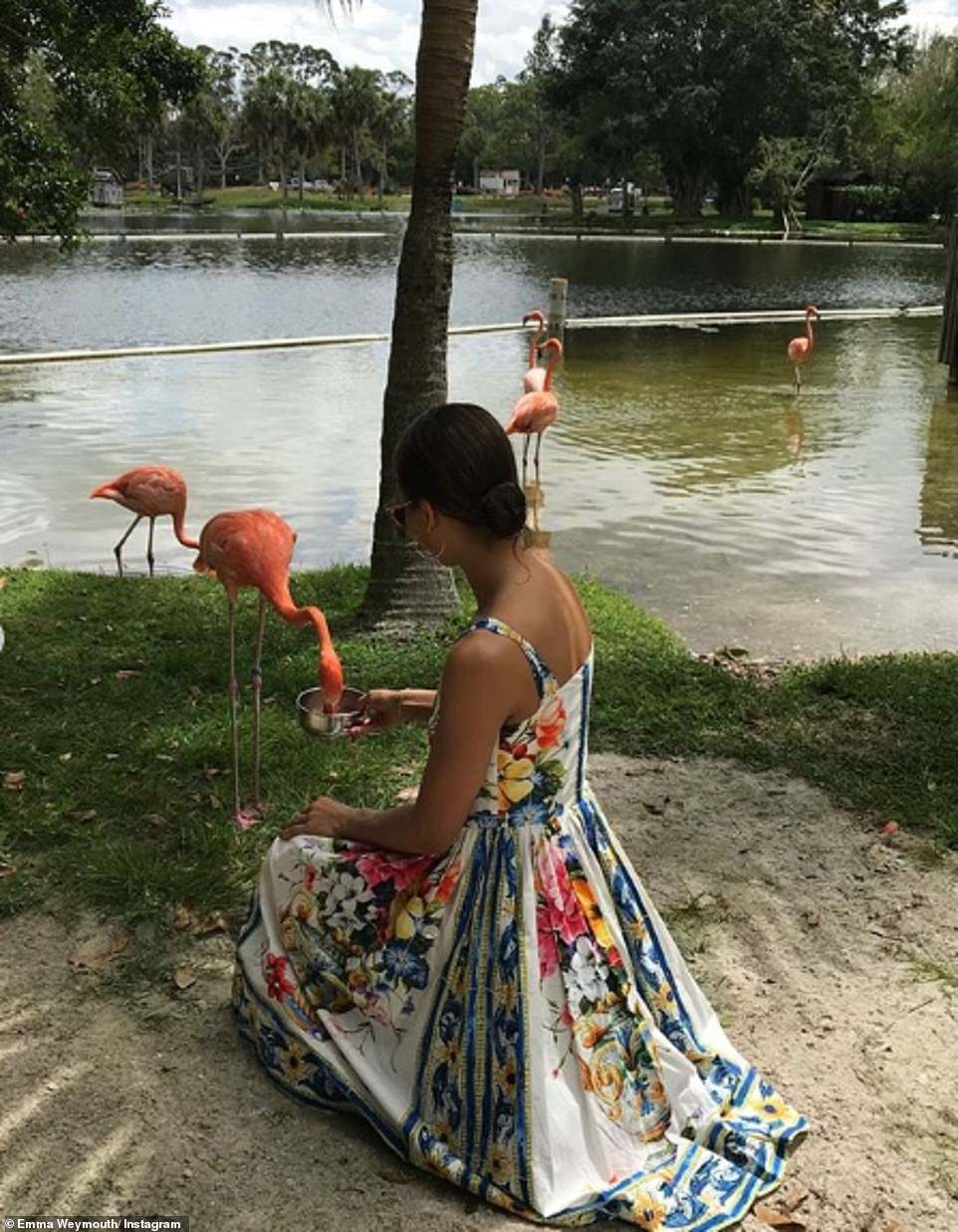 The park boasts an array of tropical wildlife and during the summer months Emma even shared a snap as she brought glamour to the park, feeding the flamingos while dressed in a D&G frock against the stunning backdrop of the park 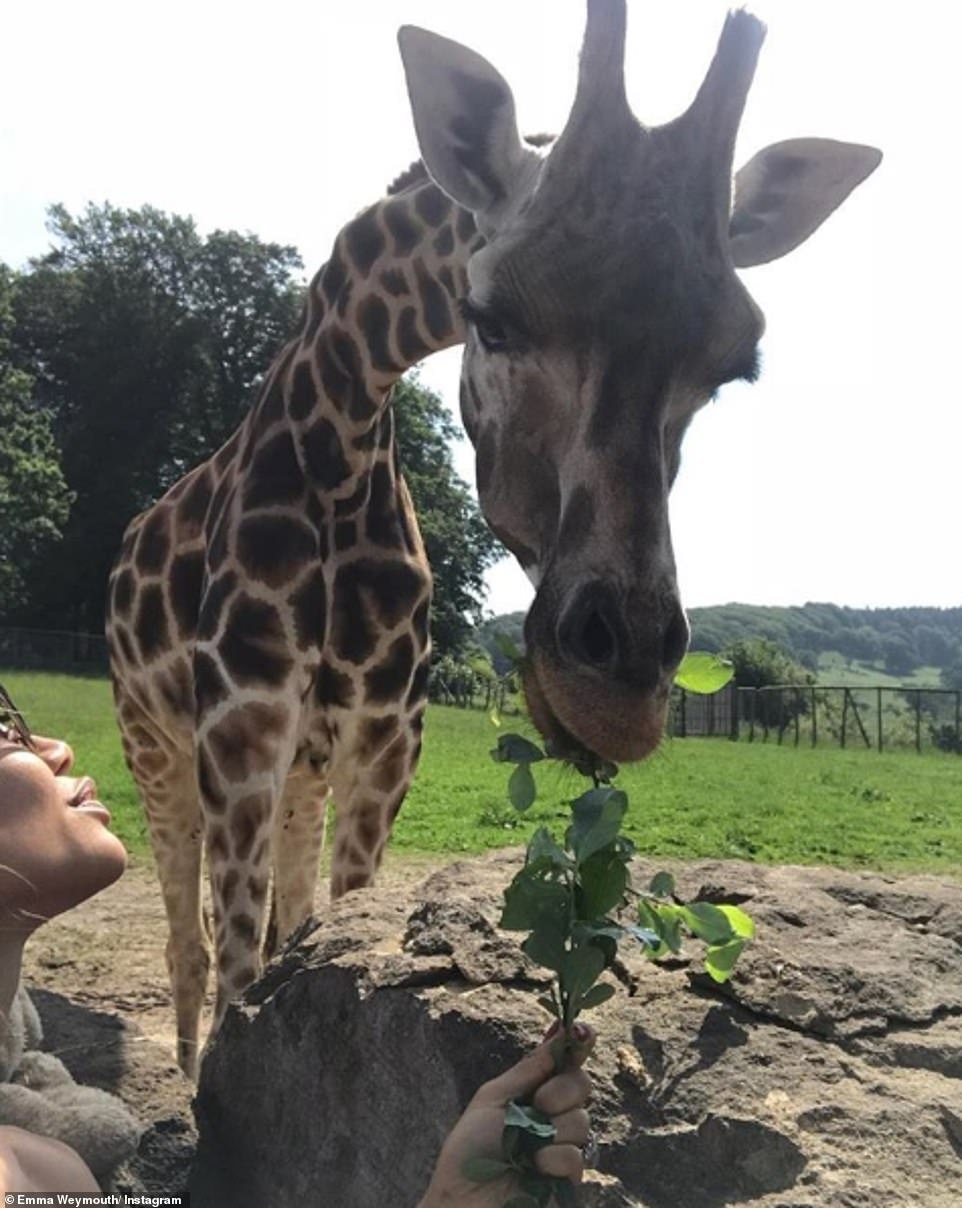 While most of us are lucky to even have a back garden, Emma has some rather unusual creatures living in hers. Proving her love for nature, the mother-of-two posted a snap as she fed one of the reserve’s taller residents- a giraffe 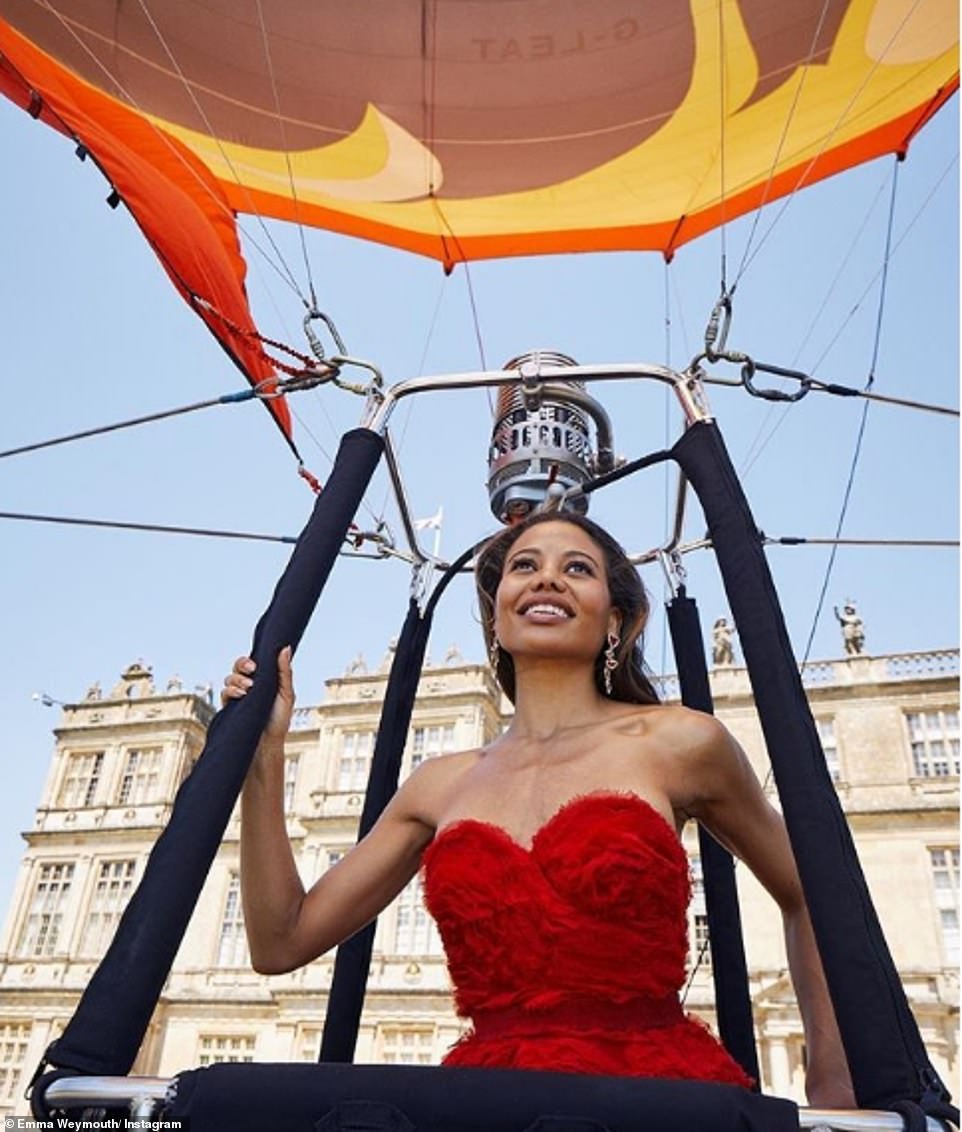 And Emma makes sure she throws herself into the events taking place at Longleat, dressing the part of a Viscountess in a strapless red dress as she took to the skies in a hot air balloon during a festival in the grounds just months ago 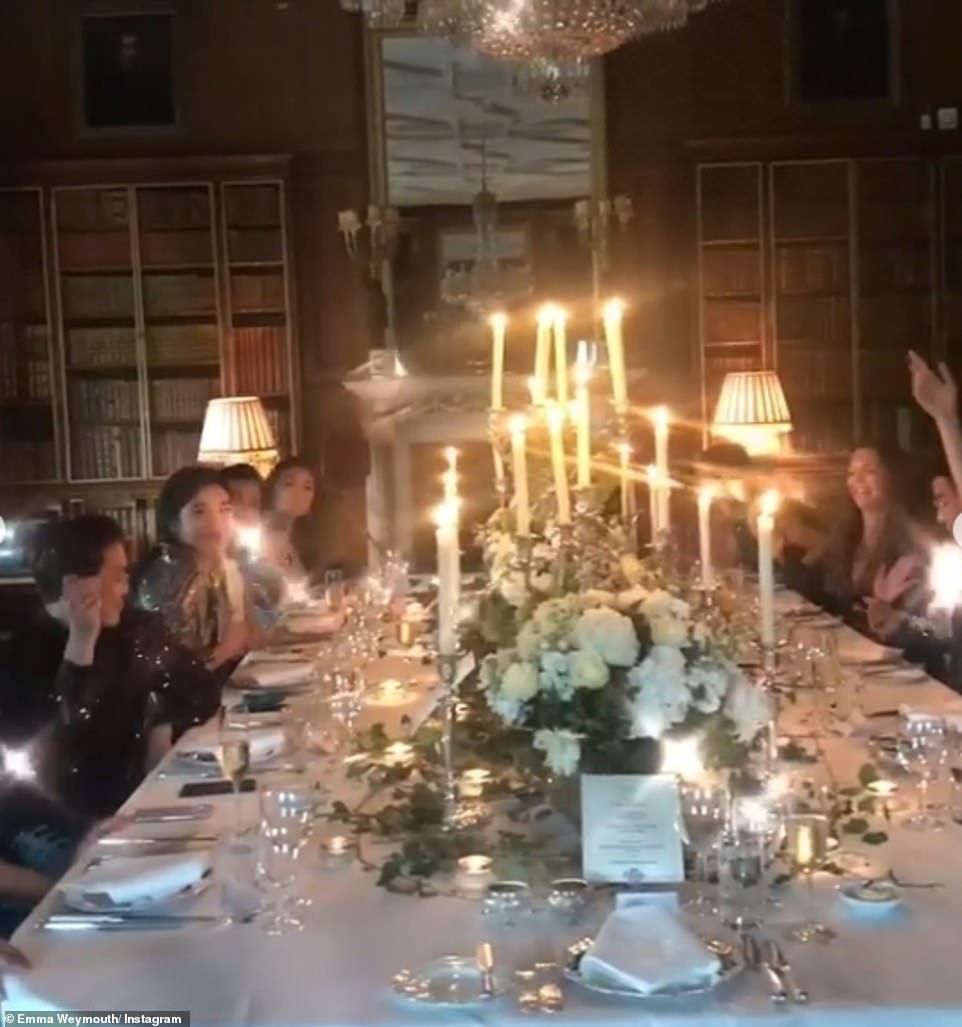 And despite her busy role, Emma ensures she makes time for her friends, throwing lavish dinner parties complete with stunning table displays for her closest friends. This party, thrown next to the secret library room, followed a black tie theme 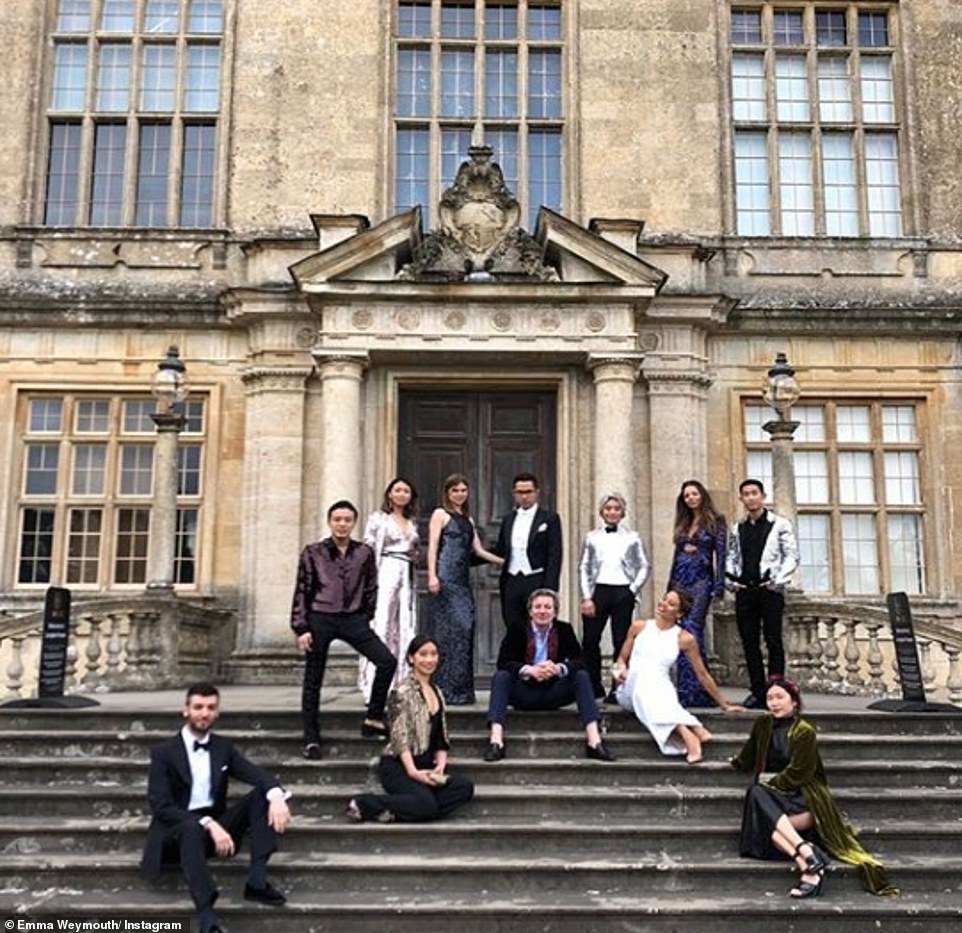 The front of the stately home makes the perfect backdrop for pictures, and Emma can be seen posing (middle right) alongside her husband, centre, and a large group of friends as they prepare to throw another lavish dinner party 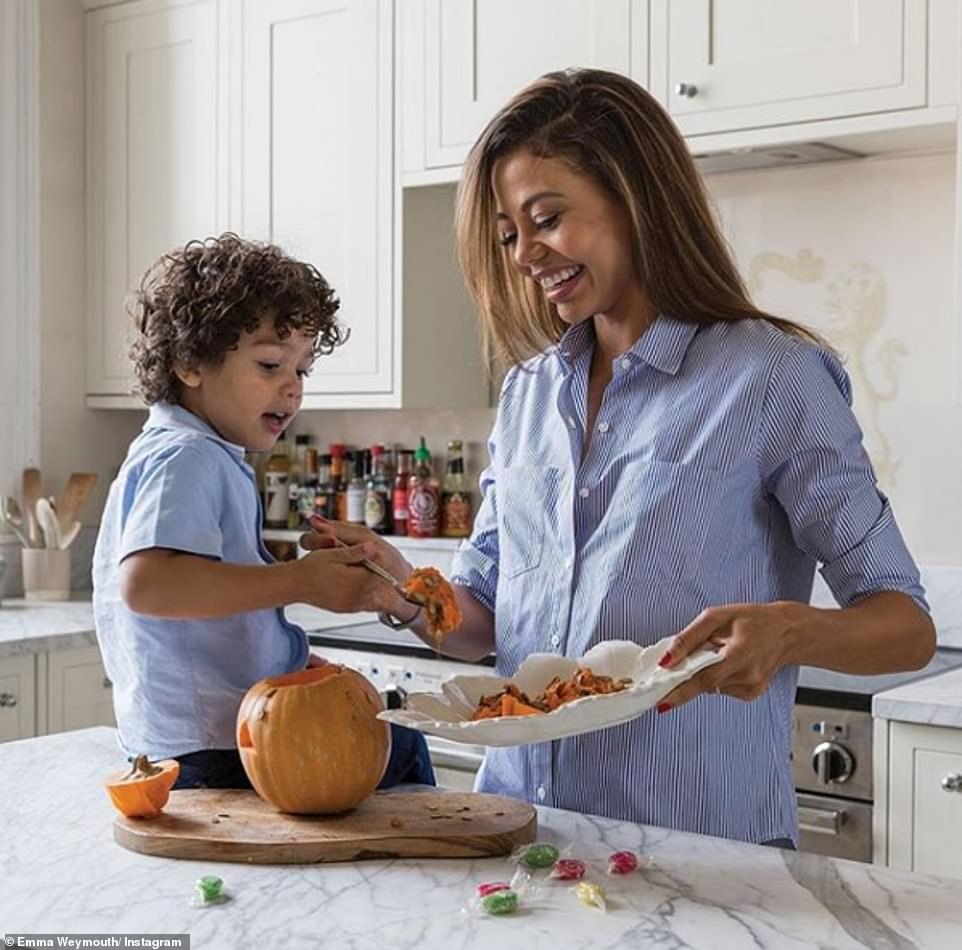 Emma enjoys cooking and getting involved in local fetes, and was seen in the contemporary kitchen packed full of condiments as she prepared pumpkins with her firstborn son John, 4, ahead of Longleat’s Halloween festival last year 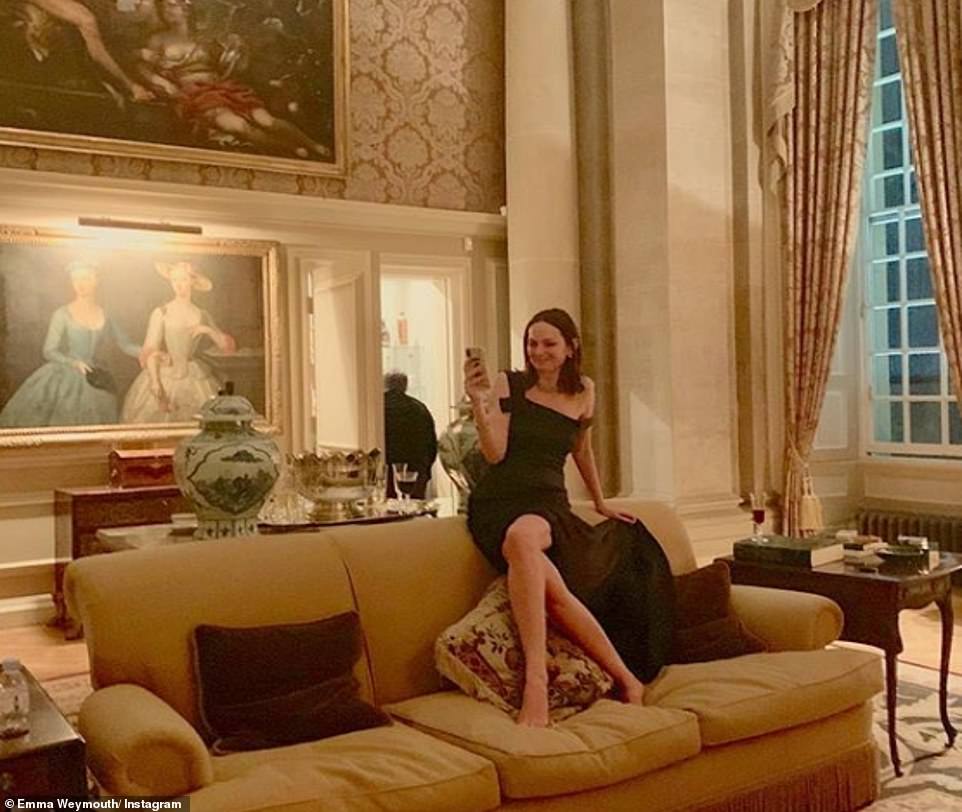 Viscountess Weymouth shared a glimpse at her jaw-dropping living room, complete with stunning artwork, huge windows with grand curtains, classic sofas adorned with velvet cushions and antique ceramics. Her friend is seen posing on the sofa, above 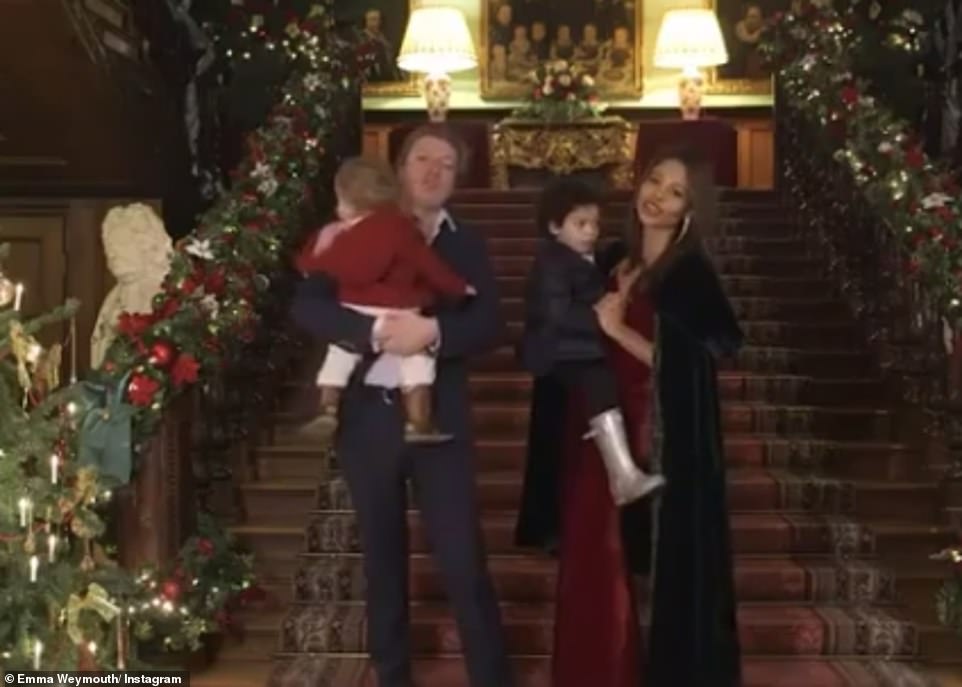 At Christmas Emma shared a short video as she posed at the foot of her grand staircase alongside her husband and their two sons, John, 4, and Henry, 1. The banister was decorated with lavish festive garland, complete with baubles, pine needles and lights 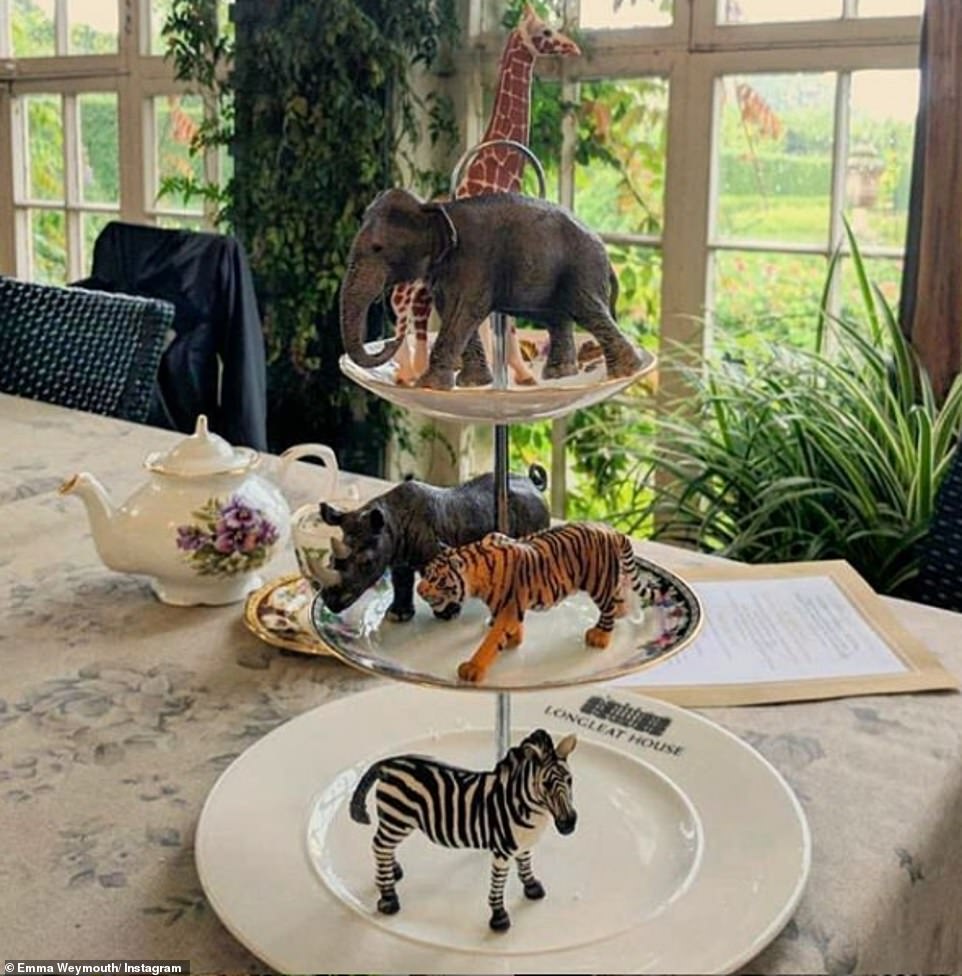 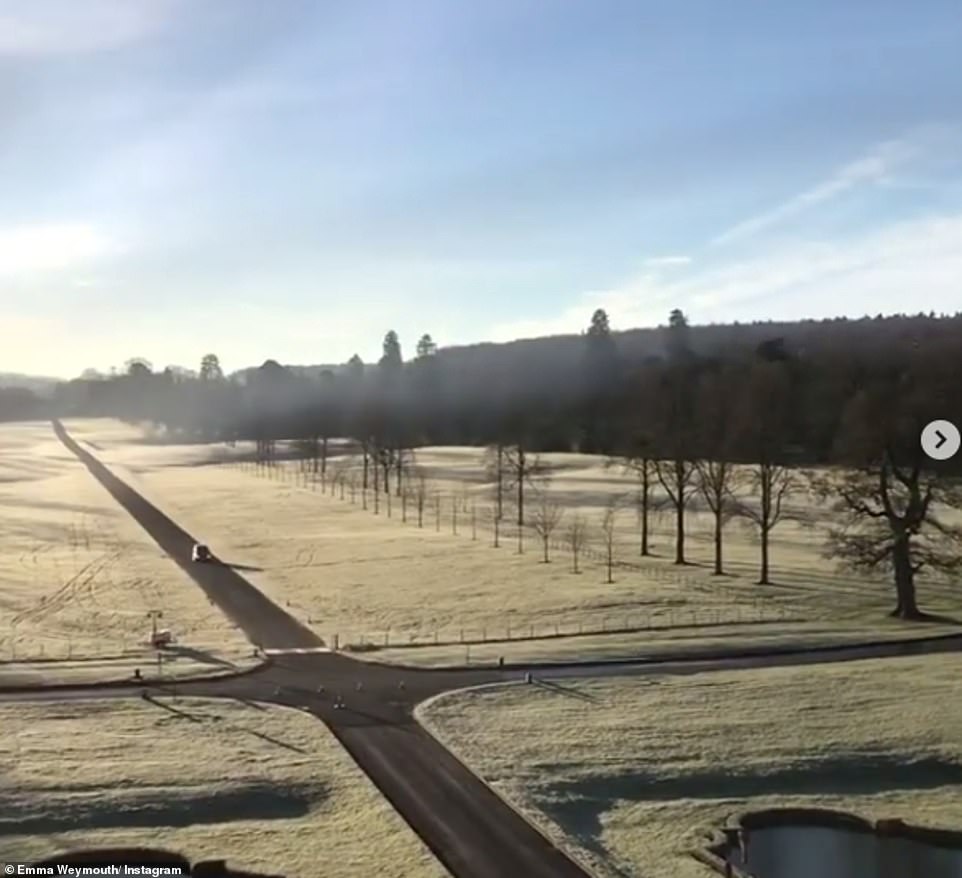 And becoming a Viscountess hasn’t stilled her playful side, with Emma recently revealing that she climbed onto the roof in order to get a stunning shot of the frosty park during the winter months 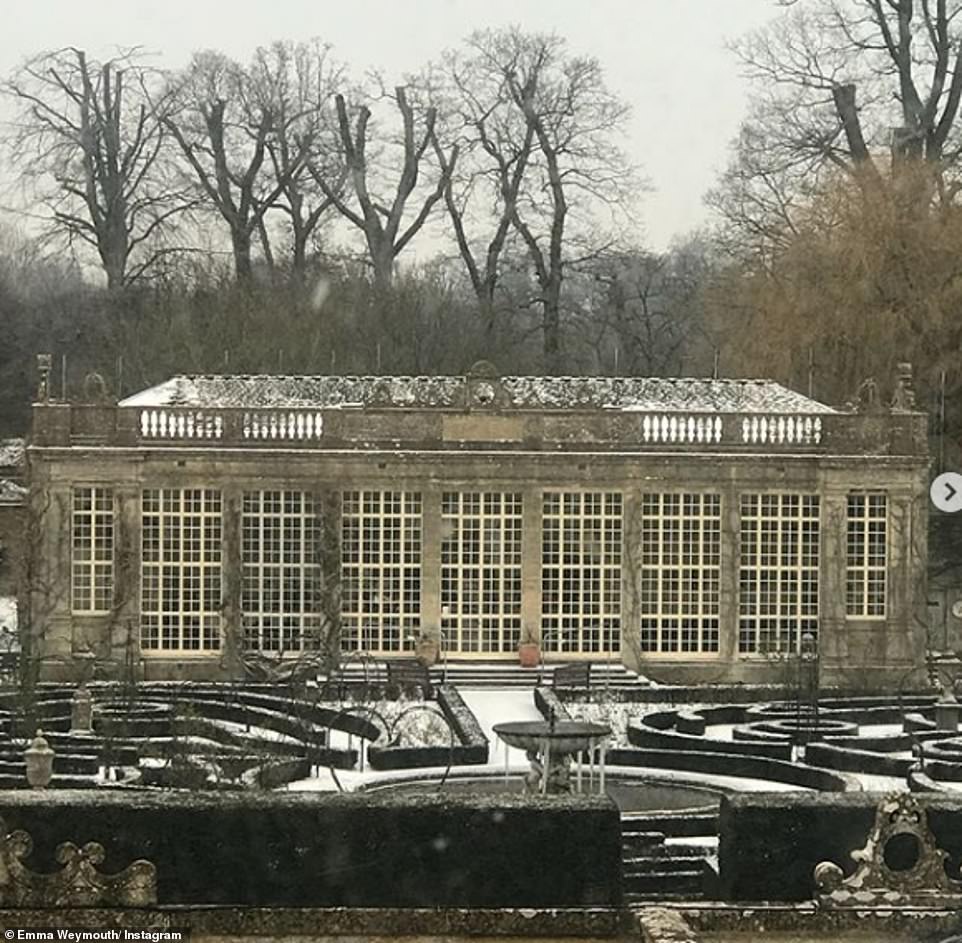 Another stunning shot shared by Viscountess Weymouth showed a snow-covered view of Longleat, the manicured gardens sprinkled with the white stuff and some of the 150 rooms – many of which aren’t used- visible from outside 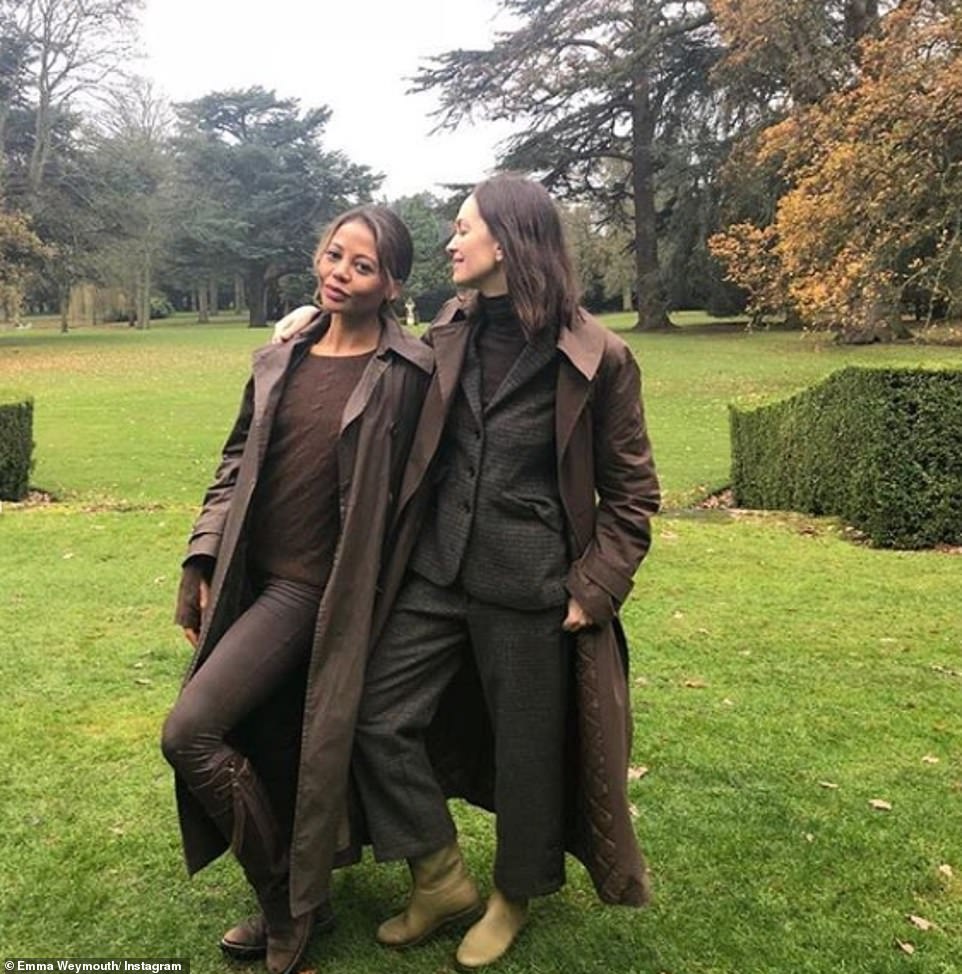 As well as a wardrobe of glamorous dresses, Emma also boasts a stylish ensemble of countryside clothing approriate for walks around the acres of land surrounding Longleat House. She is seen enjoying the outdoors with a pal