Melania Trump has left Twitter users scratching their heads after she was seen wearing only one black leather glove at the State of the Union address on Tuesday.

The 48-year-old first lady donned a $2,390 military-style coat with silver buttons by Burberry and a pair of black leather gloves to join her husband, President Donald Trump, at the U.S. Capitol, but the demure outfit ended up causing quite a stir.

Melania removed one glove to shake hands with guests in her box, but her decision to not take off the other left some viewers baffled. 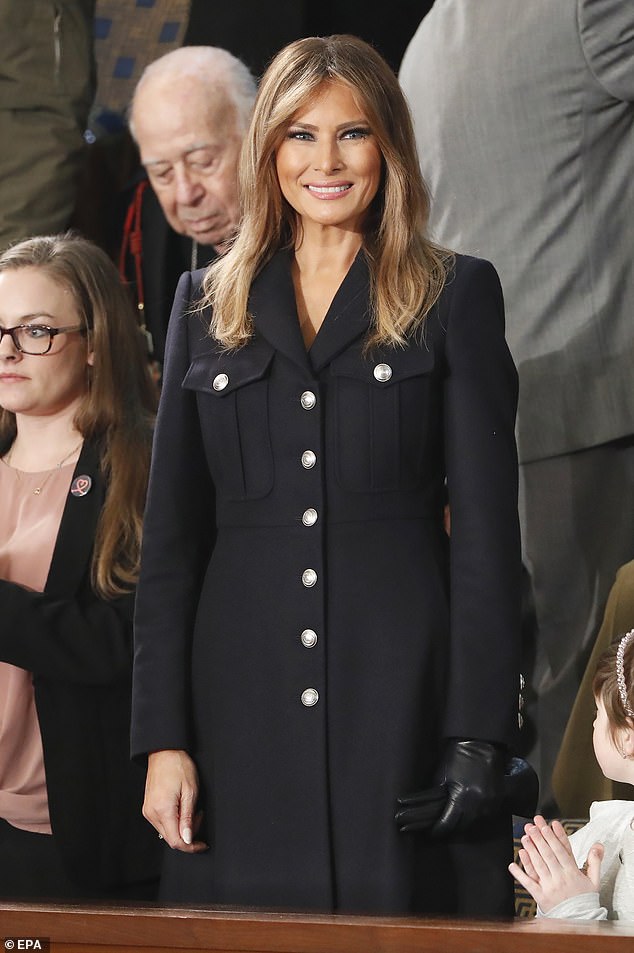 Outfit of the day: Melania Trump, 48, donned a $2,390 military-style coat by Burberry and a pair of black leather gloves to attend the State of the Union on Tuesday 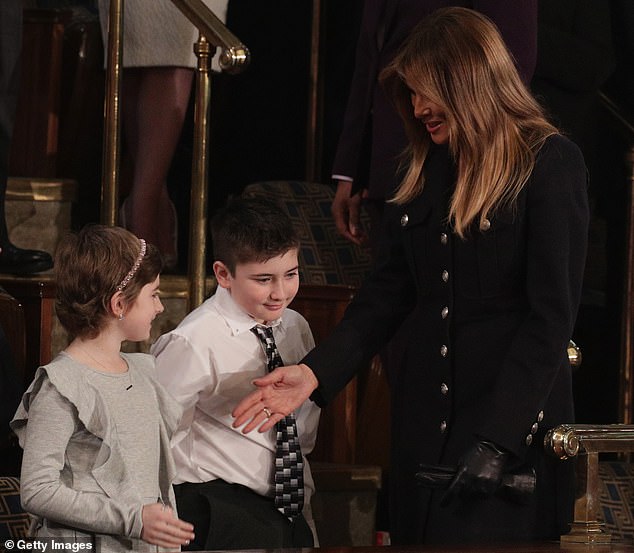 Confusing choice: Melania removed one glove to shake hands with guests in her box, but her decision not to take off the other left some viewers baffled

People took to Twitter to ask why she was wearing only one leather glove, with some joking that she must be impersonating Michael Jackson.

‘Why is Melania wearing one black glove? Is it a symbol? Maybe a tribute to Michael Jackson? Warren Genaro asked, while someone else added: ‘Melania sporting one glove, MJ tribute incoming?’

Will Munny claimed there was symbolism to the look, tweeting: Melania’s single glove was a statement…”Just Beat It.”‘

Another person used Melania’s unusual styling to take a jab at Virginia Governor Ralph Northam, who recently admitted to wearing blackface while dressing up like Michael Jackson at a dance contest in 1984.

‘Melania with a respectful tribute to Michael Jackson, only wearing one glove, not blackface. That’s how it’s done @GovernorVA #SOTU,’ the Twitter user wrote.

Questions: People took to Twitter to ask why she was wearing only one leather glove 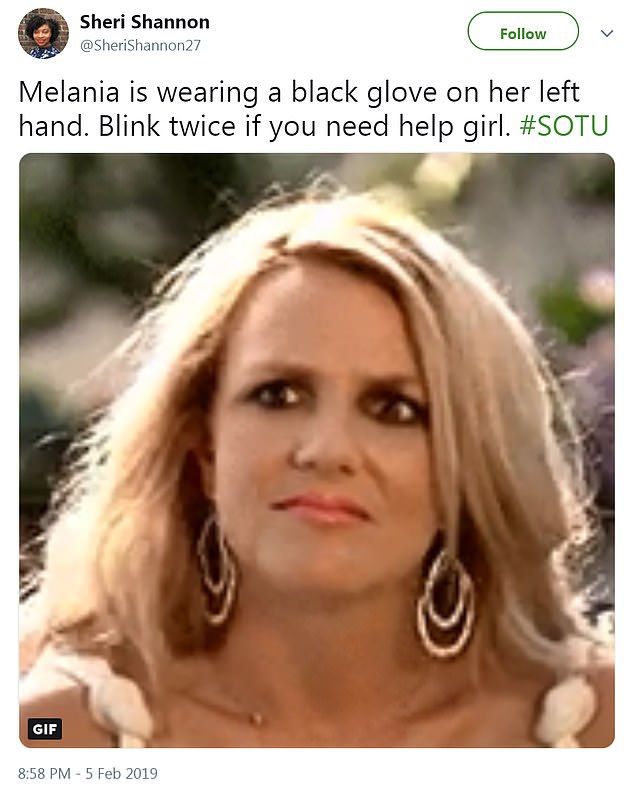 Although the first lady was only wearing a single glove for a portion of the time, people couldn’t help but question her motivation behind it.

‘Melania, what are you hiding under your one glove?’ one person asked, while Perri Konecky added: ‘So, Melania’s wearing one glove tonight? #SOTU19.’

Plenty of people questioned why she only had one glove on, with Beverly Hallberg pondering the reason why the first lady didn’t take both gloves at once.

‘Melania is wearing one glove and holding one glove. No time to take the other off? she asked. 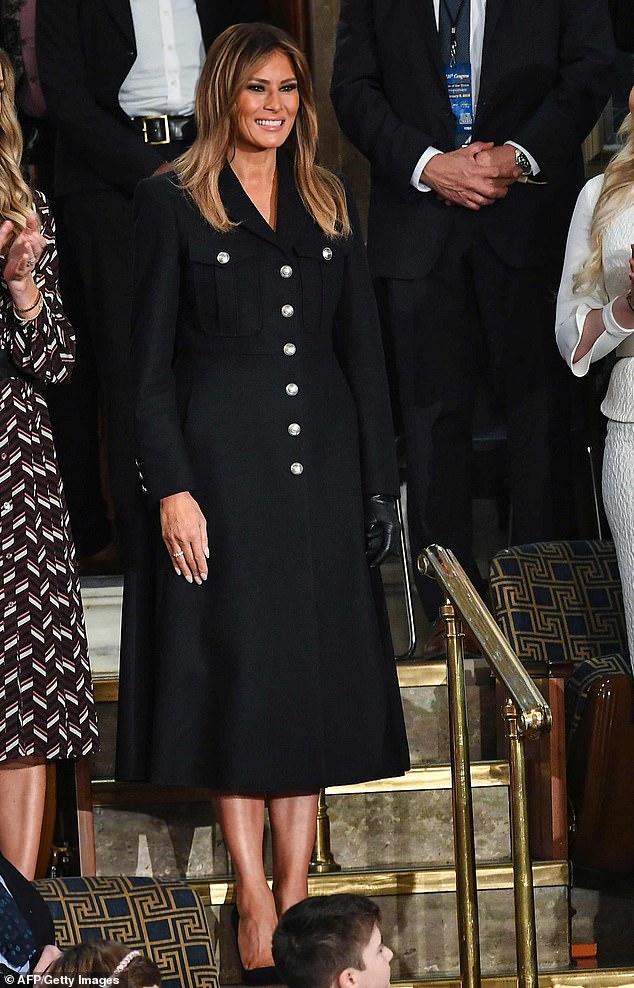 Poking fun: While sporting just one glove, Melania was compared to everyone from Luke Skywalker to Michael Jackson 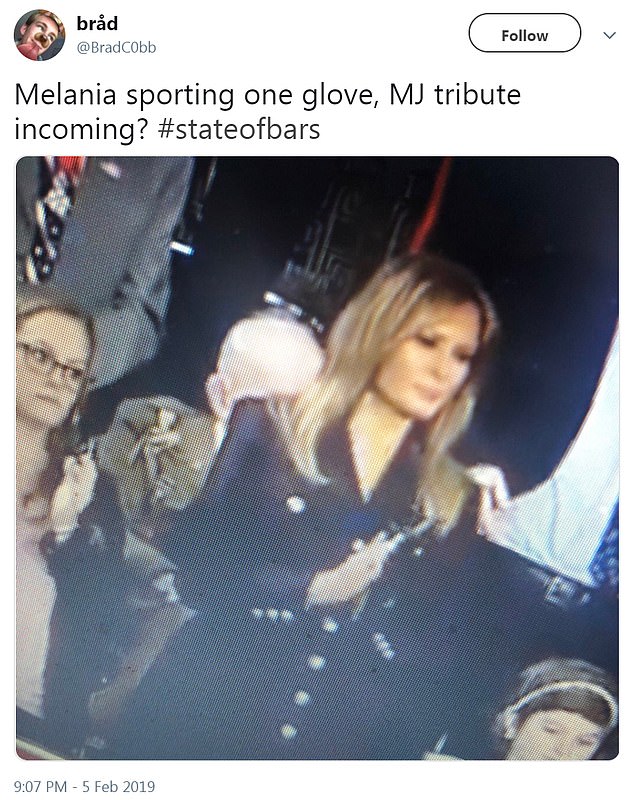 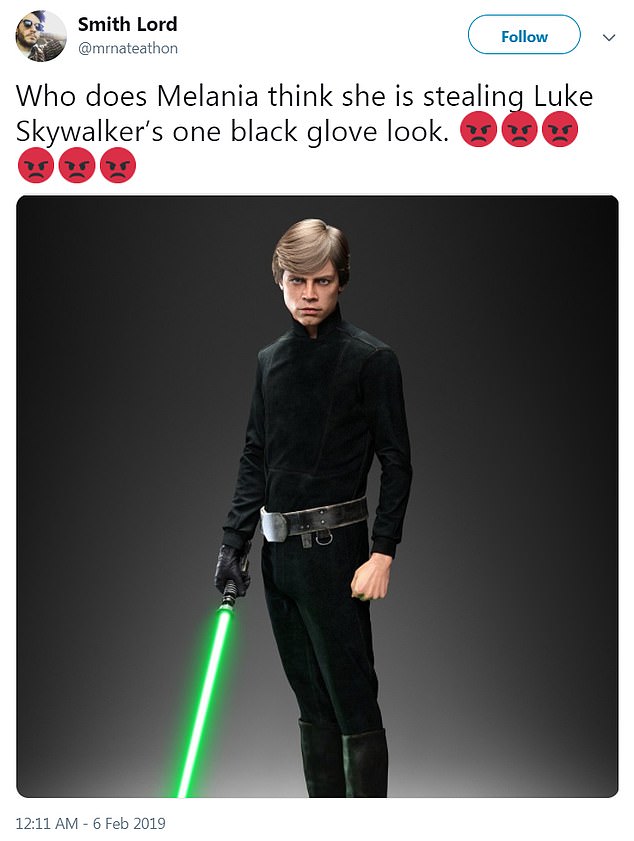 ‘Melania is wearing a black glove on her left hand. Blink twice if you need help girl. #SOTU,’ she tweeted.

Some people got creative with their comparisons while poking fun at Melania, with Amanda Burt saying she reminded her of the character Ronny who had a wooden prosthetic hand in the 1987 film Moonstruck.

‘Melania’s one-black-glove-look is *very* Nicolas Cage in Moonstruck,’ she wrote.

‘Who does Melania think she is stealing Luke Skywalker’s one black glove look,’ Smith Lord tweeted, while someone else noted: ‘Melania’s single glove look has only solidified her super villain image.’

A few eagle-eyed viewers were quick to announce the moment that Melania removed her second glove.

‘Critical breaking update: Melania appears to have ditched the single glove,’ Judy Kurtz wrote, and she wasn’t the only Twitter user happy to see the change. 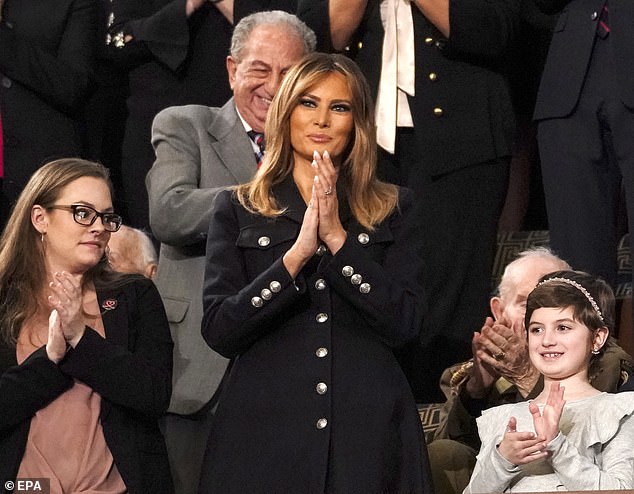 Back to normal: The first lady later removed her other glove and was only seen wearing one for a small portion of time 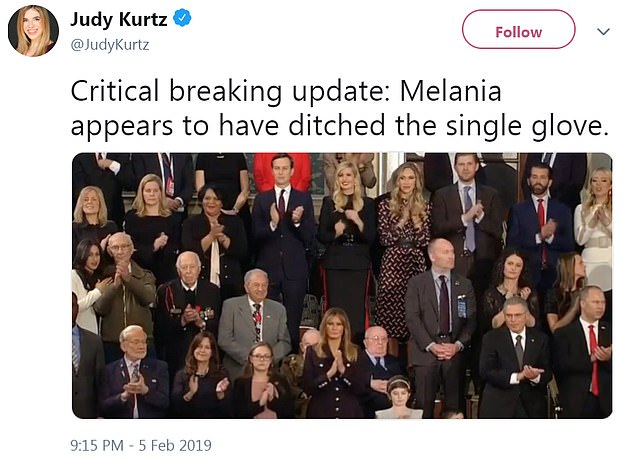 Breaking news: Judy Kurtz was quick to announce that Melania had ‘ditched the single glove’

Finally! One Twitter user was relieved to see that the first lady had taken off her other glove 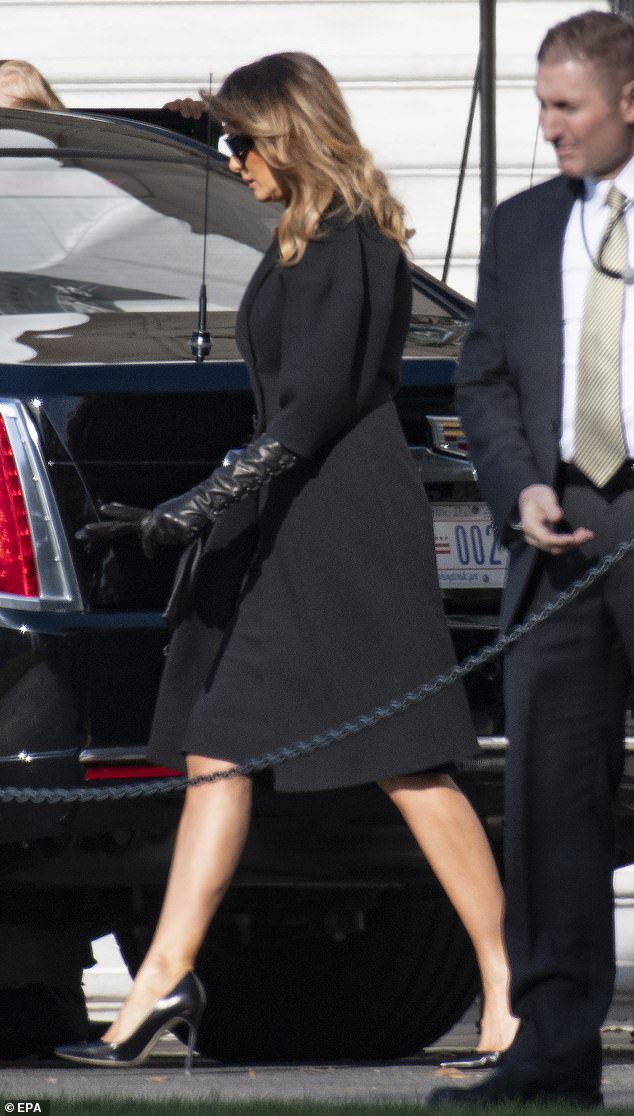 Style? Melania was also seen wearing just one leather glove while on her way to watch Brett Kavanaugh formally take his seat as the 114th justice on the Supreme Court in November 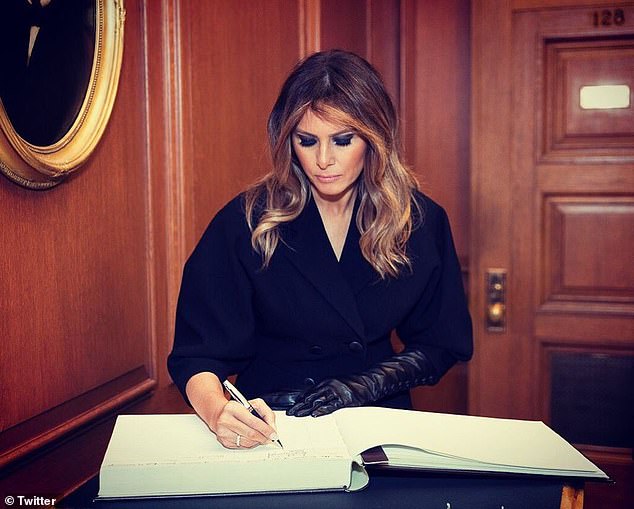 Just what she does: Melania also took off one of her gloves at the investiture ceremony to sign a guest book in the Supreme Court building

‘Melania FINALLY took that second glove off. It was killing me,’ one person tweeted with relief.

Interestingly enough, this isn’t the first time Melania has been photographed wearing only one black leather glove.

The first lady donned a similar look to watch Brett Kavanaugh formally take his seat as the 114th justice on the Supreme Court in November.

Melania joined her husband at the traditional investiture ceremony, wearing the same Dolce & Gabbana coat dress that she wore to Barbara Bush’s funeral service in April.

She accessorized the look with a pair of $625 black Manolo Blahnik pumps and elbow-length leather gloves, which she left on while posing for photos with the Supreme Court justices.

However, the first lady was seen wearing only one glove and holding the other while on her way to the traditional investiture ceremony.

Melania later took off one of her gloves for a second time, perhaps to give herself some added dexterity, to sign a guest book in the Supreme Court building.