Starting this week, I’ll be doing a monthly column featuring real couple’s sex and relationship problems and my advice on how to fix them.

I have counselled dozens of couples during my 30-year career as a sex writer, researcher, broadcaster and commentator. I have an academic background in psychology and have written 16 books, all published world-wide.

Some couples were counselled via the media on various reality TV programmes (like The Sex Inspectors on Channel 4), others were face-to-face personal consultations.

The names will always be changed to protect each person’s identity, but the couples and their struggles with sex are real.

This week’s couple are having regular sex but it’s not satisfying for either of them because Emma can only climax a certain way. 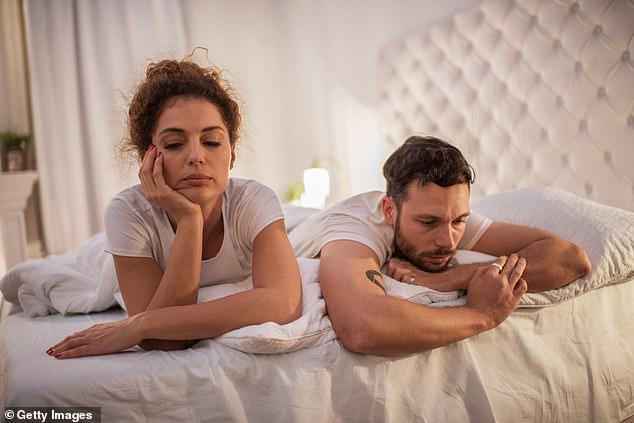 Every month Tracey Cox will be helping two real life couples with their bedroom issues. This week she advises Emma and Paul who are struggling to enjoy sex together as she is only able to climax alone

Emma’s technique is even less partner-friendly – and harder to change because it’s emotionally linked to a traumatic teenage experience.

Emma, 32, and Paul, 30, have been together three years. They’re an attractive couple who clearly love each other but unsatisfying sex is causing arguments both in and out of bed.

She said: ‘I love Paul and am very attracted to him. But sex for me has always been a private thing: I feel self-conscious looking him in the eye when we’re having any kind of sex. It feels embarrassing. I like the physical feeling of having him inside me but something stops me climaxing that way.

The only way I can orgasm is lying on my front, on a bed, grinding against a hard pillow and pressing my face into the covers. We’ve tried making it happen other ways lots of times – oral sex, using fingers etc – but it never works.

After Paul’s had his orgasm, usually through intercourse, I then get into position and look after myself. I know he hates not being able to give me an orgasm himself.

‘She called out to me ‘What are you doing Emma?’ because she noticed movement under the covers. I was so shocked to be caught, I wasn’t quick enough to make something up to cover myself. I froze and didn’t answer her.

‘She was totally grossed out by it. She told the whole group of girls what happened in the morning and they were equally disgusted. Worse, the whole school heard the story. I was humiliated and it had a massive effect on me. I went to a girl’s school and young girls are cruel. The teasing continued for years. 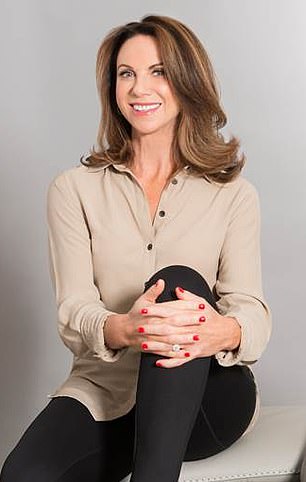 ‘I desperately want to be normal and to be able to have sex and orgasms like other couples do. I feel like a freak. I know Paul thinks I’m weird and I worry he will eventually tire of all this and leave.’

He said: ‘Emma is the sexiest looking woman I’ve ever been out with. I really fancy her and want her to want sex as much as I do. I feel like she is going through the motions, rather than geniunely enjoying it. She won’t look at me at all and is passive: she’ll let me do things to her but she never asks for anything. It’s like she has sex to please me, not her.

‘In the beginning, she faked orgasms. I had no idea. But about one year in, she told me she could only climax, on her own, face down. She told me what happened at school and I get how embarrassing that would have been. It’s different for guys. If I’d been caught, we’d have all laughed it off and thought it was really funny. Girls have all sorts of hang-ups about sex.

‘It’s really knocked my confidence. I used to think I was OK in bed but no matter what I try and how hard I try, I still can’t make Emma come. I feel left out when she does it herself at the end. More importantly, I feel useless. What’s the point of me even being there?’

What’s going on: When sex and shame are linked at such a formative time – early teens – it can be incredibly damaging. Sex stops being associated with pleasure and instead becomes something you need to hide and be ashamed of.

Her behaviour – avoiding eye contact with Paul during sex, feeling embarrassed – show sex still feels humiliating for her on some levels. She might be more rational about what happened to her but her body is stuck. She’s 32 but, at heart, a traumatised 13-year-old. 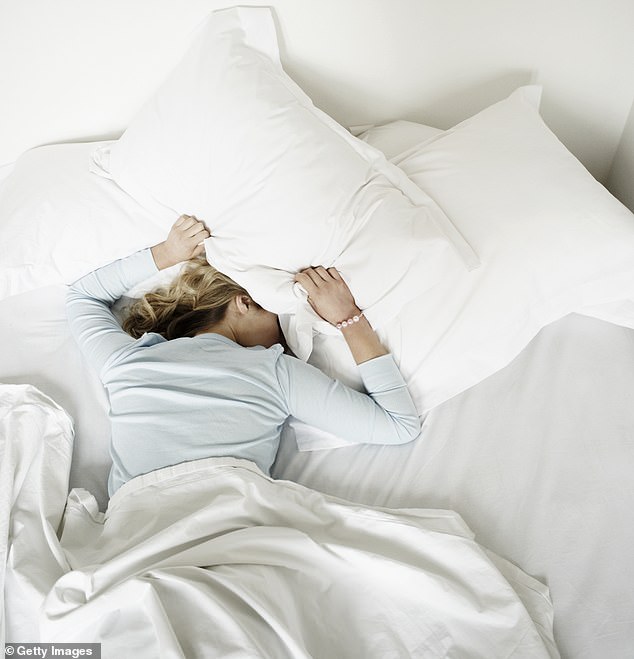 It’s obvious why Emma has chosen the method she has to bring herself to orgasm: her face is buried in the covers, so she doesn’t have to face anyone. Instead of touching herself directly, like she used to, she’s putting an object – a pillow – between her and her genitals.

She’s perfected a technique to orgasm that cuts out all intimacy – both with herself and a partner.

It’s not partner-friendly at all, so Paul can’t replicate it, and it’s a shameful position. Nothing about it says ‘Isn’t my body great! Isn’t sex great!’.

Be sensual as well as sexual. Have a bath together. Have or give a no-sexpectation massage: one you can lie back and enjoy without having to have sex at the end.

Give feedback and compliments. Paul’s confidence needs rebuilding and the best way to do this is for Emma to stop being passive and to start being more vocal during sex.

Give feedback, give compliments. Talk. Get involved with what’s happening, rather than taking without enthusiasm. Turn sex into a team activity rather than something she does privately.

Keep moving forwards. It’s good, standard advice for all couples to come up with one new thing they’d like to try, once a month. (Once a week becomes a chore because it’s too much effort.)

That’s two ‘novelty’ sessions each month. Don’t worry if you don’t like doing a lot of the stuff you try. For every five new things a couple try, only about one or two make it onto their ‘favourites’ list.

Having this one, very specific orgasm trigger – lying face down and grinding – also strips all the connection, affection and intimacy from sex. It reduces it to mere mechanics. I’m not surprised Paul feels left out and both of them feel emotionally unsatisfied, even if do both of them do climax.

Women aren’t the only ones who want intimate sex. It’s a mistake to think that men don’t like or need sex with emotional connection. For lots of men who aren’t good at communicating, being vulnerable or asking for affection or support, sex is the only time they feel loved. Looking at your partner, during sex and especially during orgasm, makes sex far more rewarding.

HOW TO FIX IT

This program aims to change the technique Emma uses to orgasm though a series of baby steps. It’s useful for anyone who can only orgasm a certain way. Asking her to change technique radically overnight would accomplish nothing. By changing one small thing, each time she masturbates, it allows her to get used to change over a period of time.

It’s not a quick fix: it can’t be. She needs time to reeducate her brain and her body and gently ease herself away from a method that’s distancing her from her partner and sex.

Change position, bit by bit Instead of lying face down, head pressed into the covers, I got Emma to turn her head to the side, facing the wall, during solo sex sessions. She kept her eyes shut to begin with and opened them when she felt more comfortable.

I guessed she’d feel exposed doing this and she did, finding it hard to orgasm. After four or five sessions, though, she got used to it.

There was another reason why this was difficult. It’s dark and quiet with your head buried in a pillow. It’s much easier to focus on orgasming because there are no distractions. Sex with a partner is distracting. She needed to get used to being distracted, so her orgasm could include Paul.

Change the object. Once she was able to bring herself to orgasm, lying sideways with eyes open, it was time to change what she ground against. Replace the pillow with a live human being!

I encouraged her to straddle Paul’s leg, whichever way felt comfortable, and grind against him. The aim wasn’t to climax, but to simply enjoy the sensation and to turn grinding – her preferred way of climaxing – into something she did with Paul, rather than solo.

Telling someone not to climax is an old sex therapy trick: banning something makes it far more appealing. It removes the pressure and allows you to relax and enjoy how something feels, without having to perform.