At the end of a long day, removing a constricting bra in the comfort of one’s own bedroom is a relief many women look forward to.

However, who knew there are plenty of women out there who never go bra-less? In fact, they choose to keep their breasts firmly encased in lingerie not only throughout the day, but all night, too.

When Good Morning Britain presenter Lorraine Kelly, 59, revealed on her show on Wednesday that she sleeps in her bra — and that she believes this practice has helped her maintain a ‘perky’ bust — opinion was firmly divided.

Some questioned how she could bear the discomfort while others insisted it was the best way to get a good night’s rest, while avoiding a dreaded ‘crepey’ decolletage.

Lorraine appeared shocked by the reaction to her revelations. ‘I didn’t realise that was weird,’ she said on yesterday’s show. ‘I don’t feel right when I take my bra off. I I feel weird. I take my make-up off and scrape my hair up, but my bra remains.’

And she’s not alone. Even lingerie firms, especially those catering for the more well-endowed woman, have cottoned on to this trend for nocturnal support with Bravissimo, Figleaves and Evans, among others, introducing a range of ‘sleep bras’.

But are there really any benefits — or indeed risks — to keeping breasts firmly in situ overnight? 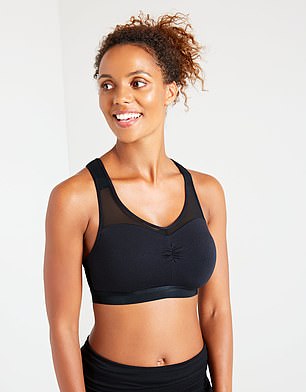 There are some women out there who never go bra-less

Marc Pacifico, a plastic surgeon who performs ‘hundreds’ of breast reductions and augmentations every year, believes it could help in the eternal fight against gravity. Perhaps surprisingly, two-thirds of the patients he sees at Purity Bridge clinic in Tunbridge Wells, Kent, seek his advice on whether or not they should wear a bra at night to keep their breasts at their best.

‘While there is no scientific evidence for it, logically I believe it could help prevent droopiness,’ says Mr Pacifico.

‘In bed, you don’t have the issue of breasts being pulled down, the way you do when standing, however ladies with fuller cup sizes often complain about them drooping to the sides when they lay down.’

HE ADDS: ‘Some have to lift their breasts before they can roll over and containing them in a bra can really help — both with comfort and preventing the natural heaviness of the breast from stretching it downwards.

‘Patients who have had breast-lifting surgery want to do all they can to maintain their new look so I tell them that wearing a crop-top or soft bra in bed might help — it would take a controlled experiment with 100 women wearing a bra cup on one breast and nothing on the other every night for at least ten years to know for sure.’

Yet for many women the sensation of allowing their breasts to ‘breathe’, i.e. be exposed to circulating air and free movement, feels natural and restorative.

Are women whose breasts are never ‘set free’ risking any damage to the skin? Apparently not, says Mr Pacifico, although, for comfort he recommends changing into a soft, cotton bra, without underwiring or metal hooks and eyes, before sleep.

‘A sports bra that’s not too fitted and doesn’t dig into the back or shoulders, in breathable cotton, rather than synthetic material, would be ideal as it’s less likely to irritate the skin,’ he says.

‘However, if it’s comfortable and they are happy, it can’t do any harm.’

Jenna Barnes, a designer who owns the Raine & Bea lingerie company, says that while she is happy to take her bra off the moment she gets home, some of her clients keep them on in bed because they are, sadly, too self-conscious about the size and sagginess of their breasts to let their husbands see them naked.

SHE SAYS: ‘I’m only an E cup and mine get trapped under my arms when I’m lying down so for those with bigger breasts it must be harder to feel comfortable.

‘Others wear bed bras to maintain the good posture they have benefited from during the day — even when lying down it can help to have your back straight and shoulders back. The breast tissue is pushed back into your own body while you sleep, rather than falling to the sides and up towards your chin, and you avoid getting them trapped under your arms, which probably improves blood flow.

‘Bed bras are made out of soft breathable fabric — the majority are non-wired. The seamlines will be adapted and designed to prevent side- spillage into the armpit or up near the chin.

‘The risk of an underwire overnight is irritation to the skin, plus you don’t need it when you’re sleeping because you’re not upright.

‘Manufacturers know women are wearing them in bed, which is why so many of them have started making bed bras.’

Like my purse, I want to know where my breasts are at night 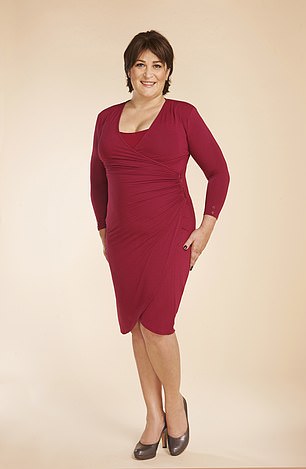 While the politicians bicker over Brexit, in the real world an equally heated debate has polarised the nation: the vexed question of sleeping in one’s bra.

Lorraine Kelly’s ‘confession’ seemed to cause consternation, and viewers ‘took to Twitter’ to express their shock and dismay. Some disapproved on feminist principles; others thought it rather odd; others still objected on health grounds.

Kelly pointed out simply that her bra made her feel safe. ‘I like to be held,’ she added. Cue much eye-rolling and pop-psychiatry.

The thing is, I completely get what she means. Because I too feel really weird if I don’t wear a bra. I, too, can’t possibly relax if my breasts aren’t neatly tucked away inside a Lycra mix. And I too have been known to wear a bra in bed, especially if I’m in shirt pyjamas. I’ve even worn one under my bathing costume.

It’s not that I hate my body (I do, in parts, just not those parts), it’s that I don’t possess the sort of breasts that can be trusted in the wild. No Kate Moss-style bee-stings, no pert rosebuds. Mine are rather unruly. And they can’t be trusted at night either, disappearing into my armpits or into loose folds of fabric with wanton abandon. Like my keys, phone and handbag, at night I like to know where they are.

By day, if I didn’t wear a bra they would probably trip me up. And without proper support, they give me backache.

Without a bra at night, I wouldn’t get a good night’s sleep. That’s why I’ve never quite understood the feminist bra-burning thing. My bra doesn’t oppress me: it’s my salvation, my liberation.

Once you find a bra that works for you — currently I am rotating a couple from M&S’s Rosie collection, and another from Panache in a 36F — you are able to relax in confidence that your breasts are in the right place, and will stay there.

At the end of the day, my trusty bra is replaced by another, by which I don’t mean full-blown underwiring; just something soft and stretchy that nevertheless holds everything in place.

It’s more for comfort than anything else: there’s nothing worse than waking up in the night to find one of your breasts wrapped around the headboard. I’m joking, of course. Well, mostly.

It wasn’t always this way, of course. There was a brief moment — it couldn’t have lasted more than about half an hour — when, aged about 17, I had rather magnificent gravity-defying breasts. Sadly, like magnolia, they did not last. And, it being pre-Instagram, I forgot to take any photographs.

While other girls could get away with pretty little triangle bras with sweet ribbon straps, by the time I was in my 20s it was a full-blown over-the-shoulder boulder holder for me. Back then you couldn’t get larger sizes in pretty colours and nice fabrics: it was porridge beige or nasty shiny black Nylon.

But still that was preferable to going without. Bra-less I not only felt exposed, I also struggled to find clothes that fitted. A good bra kept everything in its place, so that buttons could do up and tops wouldn’t shift around.

After I had children and breastfeeding, the problem only got worse. Any woman who had laughed like a drain at Miranda Hart’s infamous ‘breast clap’ joke will know what I mean.

So it was that I took to wearing a bra in bed — now I couldn’t imagine going without one.

Tearing off these instruments of torture is such a joy 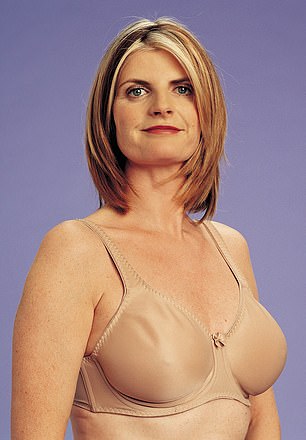 One of the greatest pleasures in my life comes at the end of the day when I go upstairs, undress and take off my bra.

To slip a pyjama top over my head and for my breasts to swing, bounce or simply be as I take that first full, unconstricted lung-full of air free from the horrible pinch around the ribcage — oh the feeling of relief and release is indescribable.

Who on earth would deny themselves that pleasure?

I am guessing this delight is something only we big-breasted women experience.

All day I have no choice but to encase my 34G breasts in a bra that doesn’t cup, but rather clamps them to my sternum leaving me feeling uncomfortable at best, breathless and trussed up at worst.

I have spent more than 30 years on a personal Odyssey to find the perfect bra — shopping all over the world, consulting all manner of expert bra fitters in my years working with Trinny Woodall as a fashion adviser, and I’m afraid it still eludes me.

The trouble is, bras have not changed in their design since their inception a century ago. They don’t support from the straps but rather force breasts up from the sternum like an instrument of torture.

And it doesn’t matter how much I spend on them — the most is about £100 — I still end up with sore, itchy strap marks scored across my body at the end of the evening. Is it any wonder that taking off my bra is something I look forward to all day?

Like most women, my relationship with my breasts, and the bras necessary to render them presentable and decent in clothing, has deteriorated with age.

I was a late developer and entered my 20s with a perfectly perky pair of C-cup breasts that I didn’t really think about all that much. I certainly don’t remember shopping with my mother for my first bra, or any momentous ‘coming of age’ event in a department store. A bra was something that a girl put on at the start of the day, took off at the end and didn’t warrant any further attention.

The menopause scored the final blow and today I resentfully strap my breasts into a G-cup. Each breast is easily the size of my head and weighs 6lb — I’ve weighed them! They stay the same size, regardless of my weight. Last year I lost a stone-and-a-half — going from a size 16 to a 10/12, but my breasts stubbornly remained the same size.

It is impossible to look fashionable or cool with big breasts. The only look that you can carry off is sexy or matronly, and at 56, I am gravitating towards the latter.

I’ve whittled my bra collection down to around four bras by the likes of Triumph and Simone Perele — plus a Shock Absorber sports bra for running.

Every night, as I unhook my bra and sigh with pleasure, I think, should I go for a breast reduction? But I always manage to talk myself out of it. Plus, my husband really likes my boobs, so that’s the main thing. They’re here to stay.