A woman with severe cystic acne has left the house without makeup for the first time after learning to embrace her skin.

Grace Nesbitt, 23, from Philadelphia, has suffered with the skin condition since she was in high school.

But after years of struggling with her self-image, she has shared her story on social media and gone out bare-faced for the first time, in the hopes of inspiring others to find inner confidence.

Grace, who works as a stylist, says that her acne is so severe that she struggles to leave the house, as well as being unable to eat or smile without being in pain. 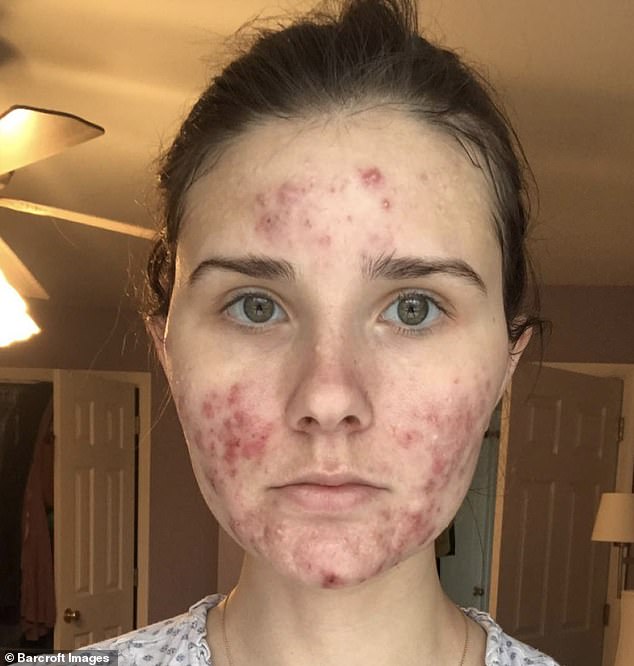 Grace Nesbitt, 23, has suffered with cystic acne since high school and after years of covering it up she has finally learned to embrace her skin 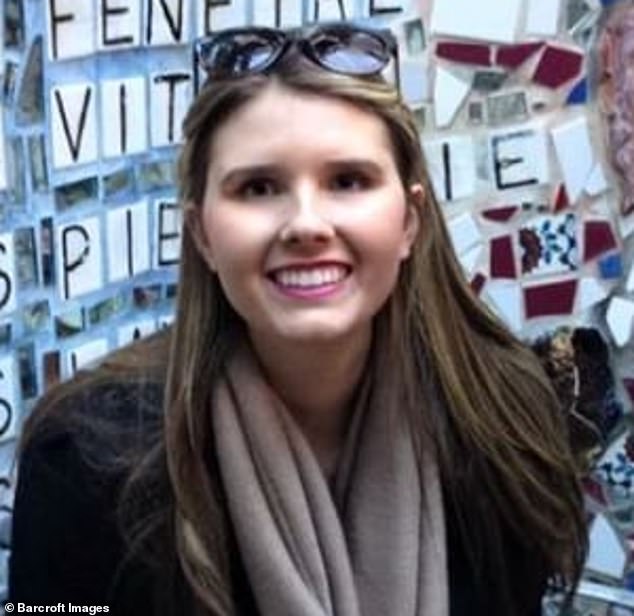 Previously Grace would never have dreamed of leaving the house bare face, covering her acne with makeup every day

Grace said: ‘I realized I needed to embrace my acne and start falling in love with myself again.

‘I just didn’t like who I was and I knew there was good parts about me, but I couldn’t find them anymore.  It’s definitely taken a lot to just pull myself up.’

Cystic acne is often thought of as the most severe form of acne; it causes red, tender bumps under the skin and can be extremely painful. It is also the most difficult type of acne to treat.

While Grace was in her senior year, she was prescribed an eight-month course of Accutane, a last-resort treatment which is controversial because of its harsh physical and mental side effects, like peeling skin and depression. 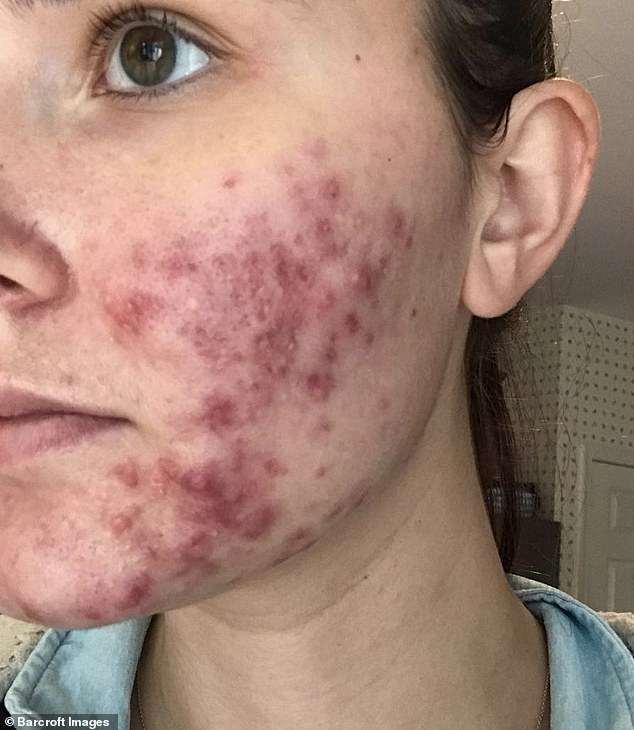 Grace’s acne is often so severe that she struggles to leave the house, as well as being unable to eat or smile without being in pain 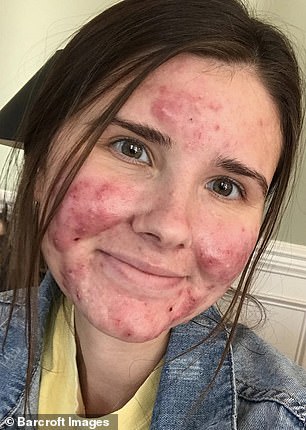 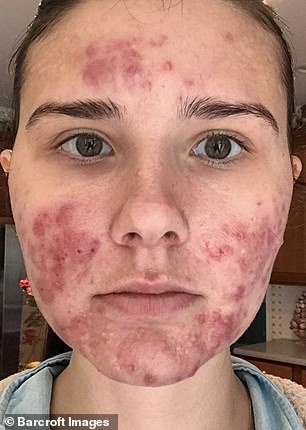 Her acne cleared after taking the tablets, but only temporarily. In the past six months, Grace says her break-outs have become ‘progressively worse’.

She insists that she has tried different diets in attempt to clear her skin; gluten-free, dairy-free and general healthy eating.

She has also tried exercising more, as well as undergoing tests to check for any hormone imbalances or allergies which could be causing her flare-ups. So far, she says, nothing has helped.

Grace said: ‘A lot of people like to give their input or their opinions, or tell me what I should be doing. They think I’m not cleaning my face or taking care of my body correctly.

‘I changed my whole lifestyle because of the things people would say to me and that definitely impacted how I saw the world. I didn’t want to go out in public. 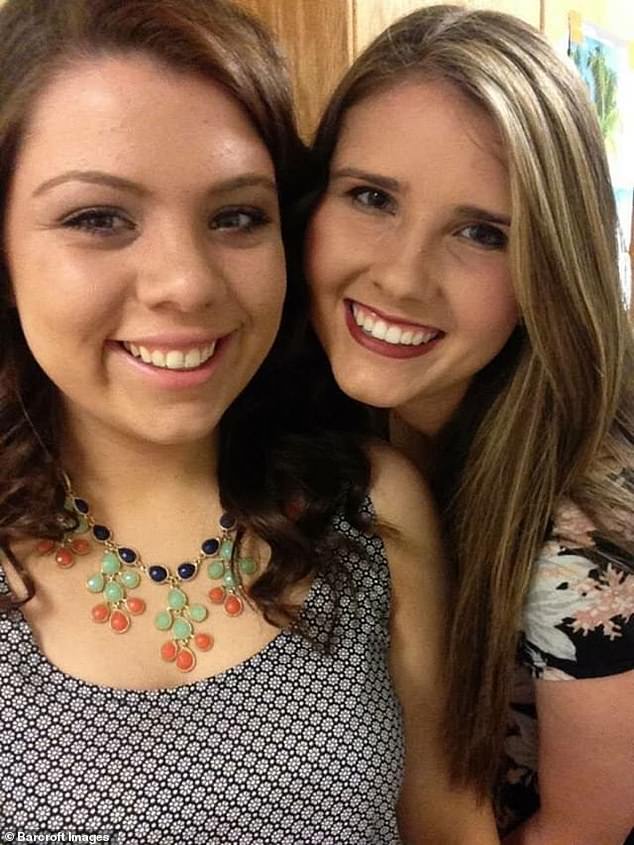 Previously Grace, pictured right wearing makeup, has tried different diets to try and clear her skin, including gluten-free, dairy-free and general healthy eating, but nothing has helped 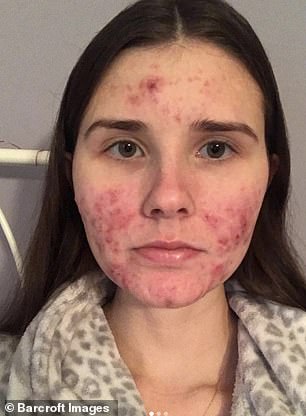 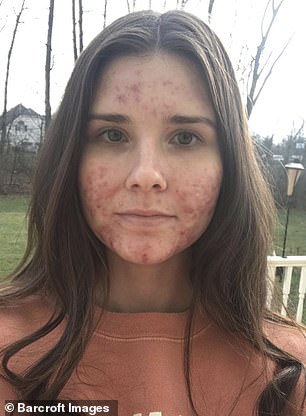 ‘I would say the most difficult part about dealing with cystic acne is probably going out in public.’

Determined not to let her acne rule her life, she started up an Instagram page where she posted photos of herself bare-faced and shared her journey.

She said: ‘I definitely think that I am trying to change the narrative of acne not making you ugly.

‘People say I inspire them, I help them go out without makeup on and I think I am doing good and sending some positivity to the world and it’s wonderful.

‘It inspires me every day because I see other people doing it.’

Now only two months into her online journey, she has gained almost 800 followers and has made friends with a community of people who are going through similar experiences.

Grace said that her acne and low confidence stopped her from enjoying life with her friends and forming relationships, especially in her 20s when everybody around her was going out. 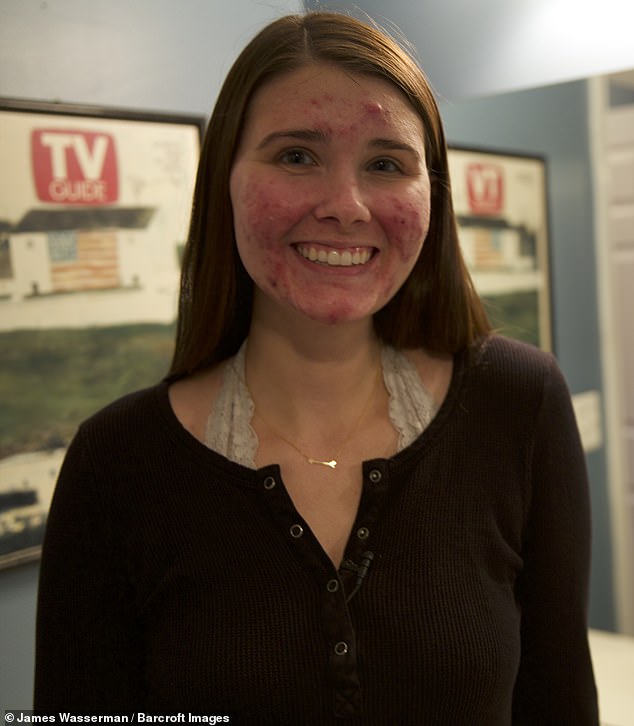 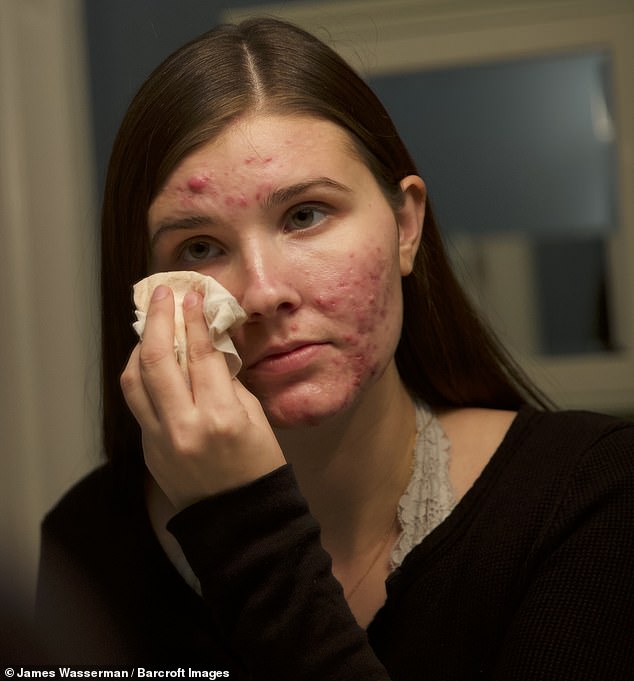 So as her next step towards embracing her skin, she agreed to going on a night out with her friends without makeup – something she hadn’t ever done before.

She said: ‘It wasn’t until about a year ago where I just stopped going out at all. I lost all confidence.

‘It’s a very small town and going out anywhere you are bound to see people and I think that was my biggest fear.’

But Grace eventually overcame her fear by going out a local bar, bare-faced, and is not looking back.

She added: ‘I am surprised I didn’t have a little bit of an anxiety attack.

‘I think I hid in my room for too long with my makeup on and now I am not as afraid to go out in public without makeup because that wasn’t even bad.

‘I am just hoping that this experience helps others as much as it is helping me.’