A mother-of-two has spoken out about how she decided to get her breast implants removed after discovering they were ‘poisoning’ her body.

Shay McDowall, from Brisbane, went from a C-cup to an E-cup after undergoing a breast augmentation when she was 18 years old to ‘boost her self-confidence’.

She started to fall seriously ill following the birth of her first baby daughter Skylah at the age of 21 – three years after the procedure – but she had just assumed the symptoms were down to being a new mother.

Speaking to Daily Mail Australia, the now-25-year-old woman said she was able to recover once the silicone was taken out of her chest after a four-hour surgery in early February this year. 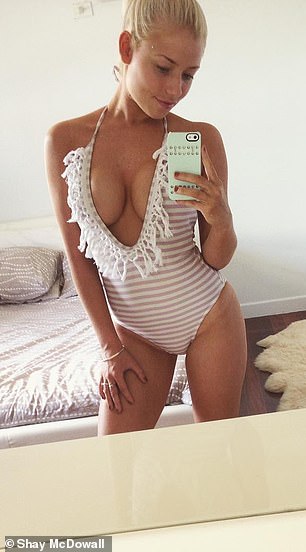 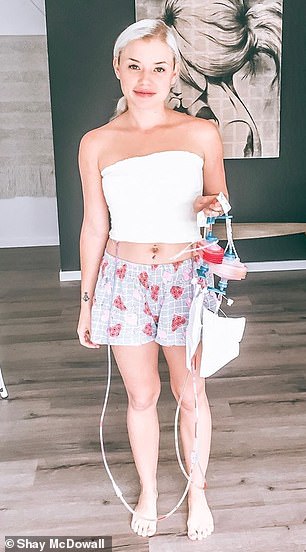 Shay McDowall (left with her breast implants and right after getting them removed this month), from Brisbane, went from a C-cup to an E-cup at 18 years old when she underwent a breast augmentation to boost her self-confidence in 2011 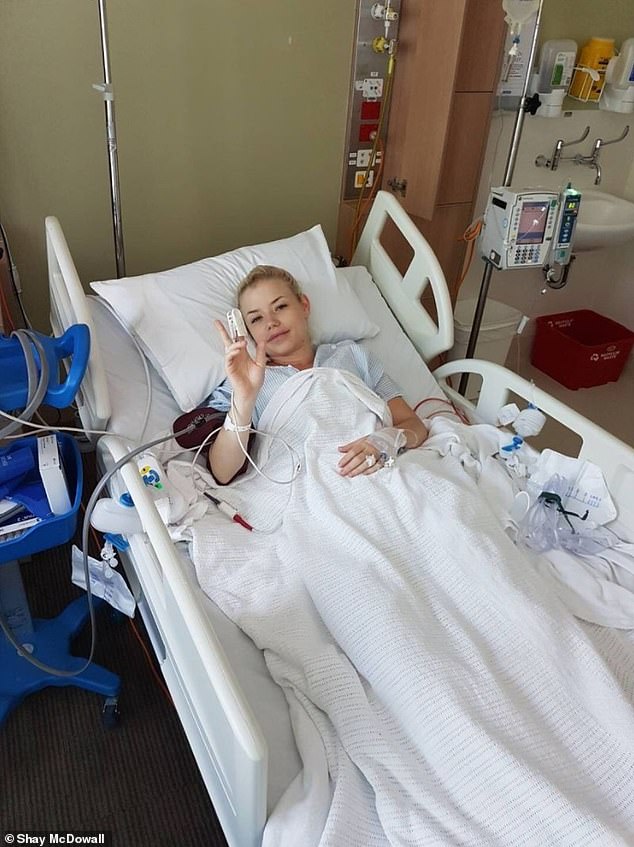 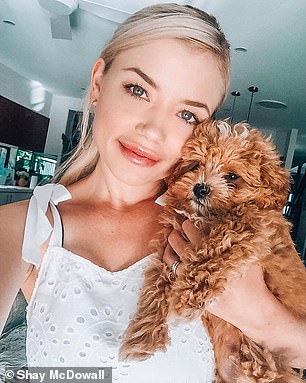 When she started experiencing health problems, the vet nurse had just assumed the symptoms were down to being a new mother

‘I knew I had to get them removed after our second child. My body suffered from placenta poisoning five months post-partum and I, again, ignored the warning signs,’ she told Daily Mail Australia.

‘It was time to listen to my body and put my health first. I knew I had to stop making excuses for the way I was feeling and take immediate action before my children had to suffer also.

‘I noticed many of my symptoms subsided and disappeared completely. It’s these instantaneous results that have truly blown me away.

‘I know I have a long journey ahead of me due to the years my body has struggled but every day without my implants is something I truly cherish. I feel like me again.’

‘It started out as fatigue. Everyday felt like a struggle,’ she said.

‘Breastfeeding was very difficult for me as it was hard to tell when my boobs were empty which resulted in various episodes of mastitis.

‘I noticed a decline in my health soon after I had to cease breastfeeding. One implant had dislodged, causing discomfort and pain.

‘The symptoms came on hard and fast after this. But for a very long time, I blamed my symptoms on being a mother instead of listening to my body.’ 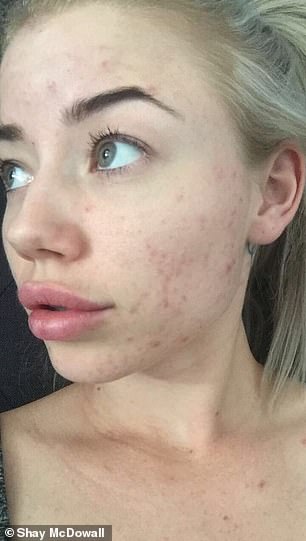 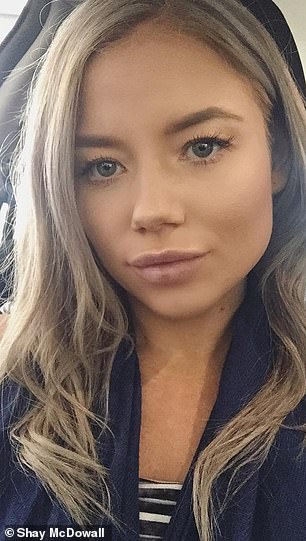 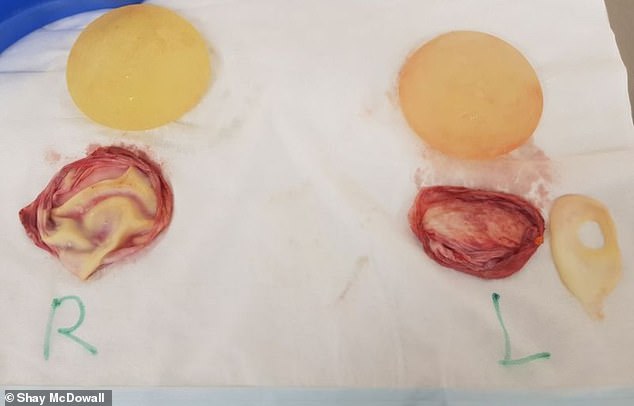 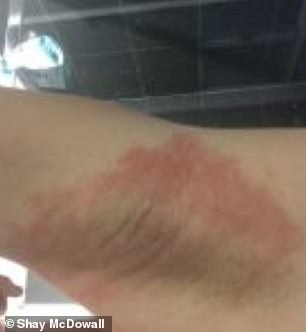 Before undergoing surgery to have the silicone removed, Shay suffered chronic eczema and unexplained rashes

‘These came on like a tsunami. My body was screaming for help. I was naive,’ she said.

‘I had friends do my makeup and they were shocked about the yellow tone of my skin and how terrible my acne was. I had beautiful skin, there were simply no explanations for this.

‘My immunity was slowly crashing and there was nothing I could do about it. The way I looked on the outside was nothing in comparison to how I felt on the inside.’

Shay – who blogs under Embrace Bliss and Grace – said she was just 18 when she decided to undergo breast implants in 2011.

‘I had done absolutely no research about breast implants, and there were most certainly no life-threatening warnings to deter my decision,’ she said.

‘I requested a D-cup and ended up being an E-cup.’

Her breast implants soon caused years of significant neck and back pain as she felt they were too big for her tiny frame. 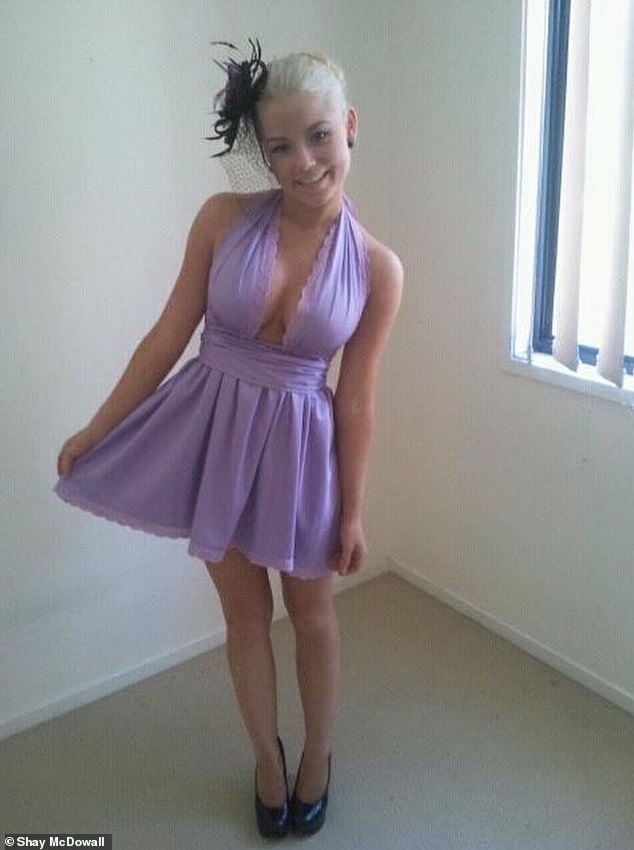 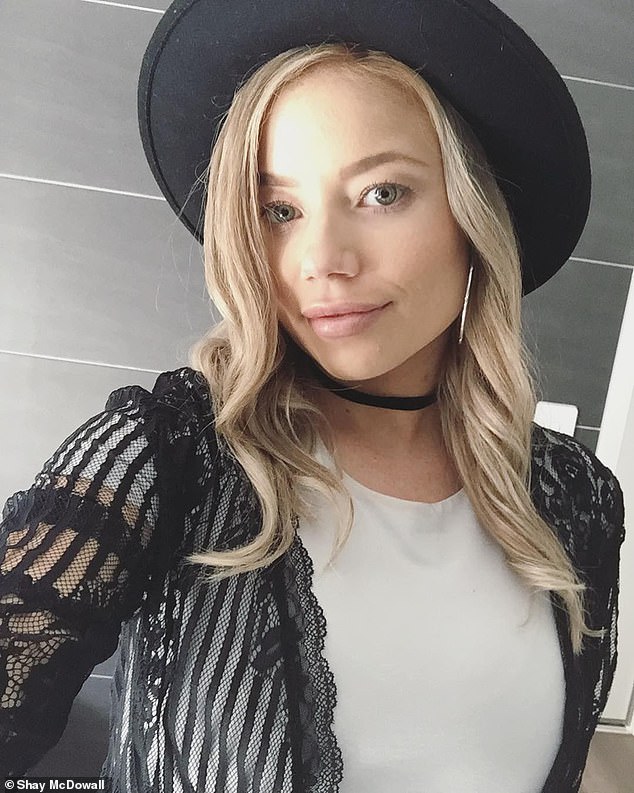 She started having fertility problems when she and her husband Sam, 26, struggled to conceive naturally for 18 months.

‘After experiencing an effortless conception with Skylah, I sensed something was wrong when we couldn’t conceive our second child,’ she said.

‘I could feel my body struggling to keep up. It was desperately fighting a long and silent fight within me.’

Following the birth of her second baby – now-eight-month-old daughter Wynter in June 2018, Shay said she made the tough decision to remove her implants.

I could feel my body struggling to keep up. It was desperately fighting a long and silent fight within me

‘After four months of breastfeeding, Wynter was refusing my breasts and I knew in my heart that something was not right,’ she said.

‘Ultrasounds confirmed placenta poisoning. After almost five months being naive and not listening to my body, I had had enough. I promised myself that I would prioritise my health.’

After doing some research, she believed her symptoms were the result of a ‘breast implant illness’, defined as toxic poisoning from implants.

She also discovered thousands of other women around the world facing the reality of serious health problems after getting breast implants.

Despite her horrific experiences, the illness is not a medically recognised condition. 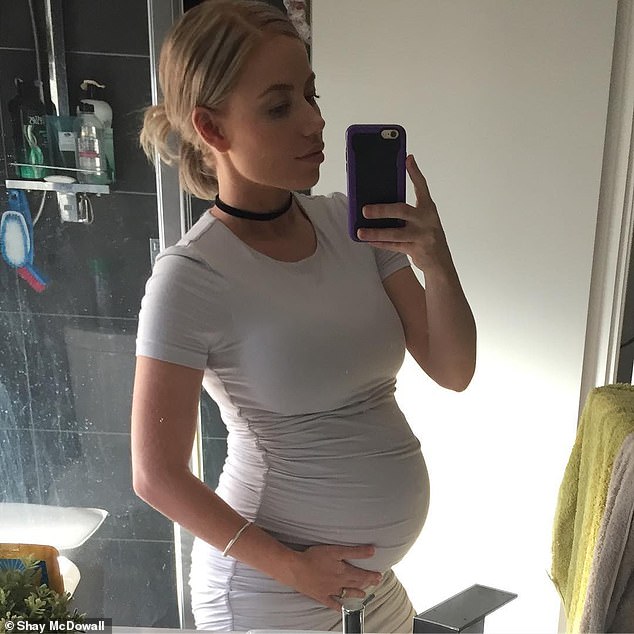 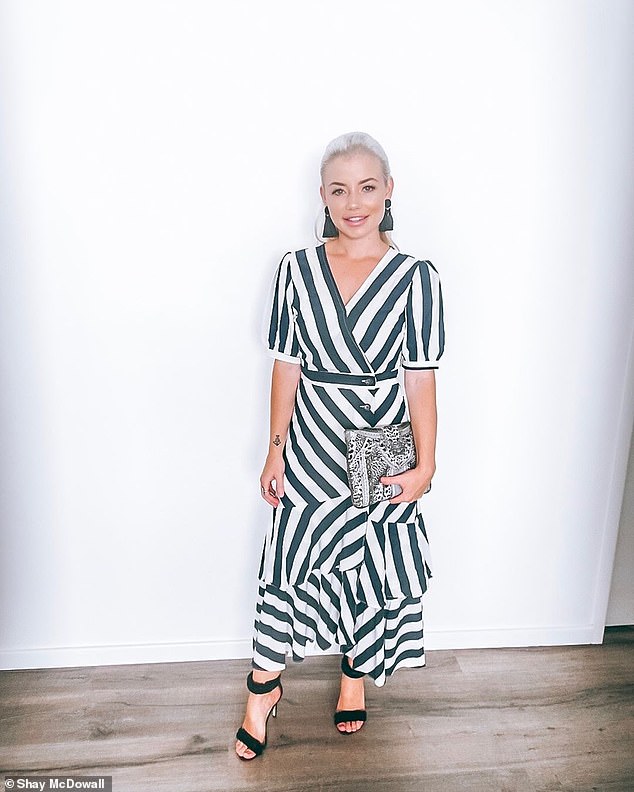 Shay – who’s now on the road to recovery – said she was shocked to see her silicone covered in ‘oozing pus’ after she had them removed this month.

By sharing her story, she wanted to warn other women about the dangers of breast implants.

‘I want to raise awareness so other women do not end up in my shoes. There needs to be more research about the effects of breast implants,’ she explained.

It does not matter what surgeon you go to, what country you get the procedure, and which type of implant you get. It is based on how your body reacts to a foreign body living inside of you

‘Your body’s immediate response to a foreign object is to fight it. All implants are “foreign bodies”. A woman’s body reacts to the introduction of this foreign object by forming a capsule of scar tissue around the implants. Breast implants cause toxicity in the body in several different ways.

‘We all get implants out of vanity and the desire to be beautiful. Then we get sick and live in denial while we endure a poor quality of life. I am on the other side, I am healing and implant free.

‘It does not matter what surgeon you go to, what country you get the procedure, and which type of implant you get. It is based on how your body reacts to a foreign body living inside of you.’