She’s the daughter of fashion icon Christie Brinkley, who relocated to Australia earlier this year.

And on Saturday, Sailor Brinkley-Cook enjoyed a day at Sydney’s Coogee Beach with boyfriend Ben Sosne.

The 20-year-old American model could not wipe the smile off her face as she packed on the PDA with her beau. 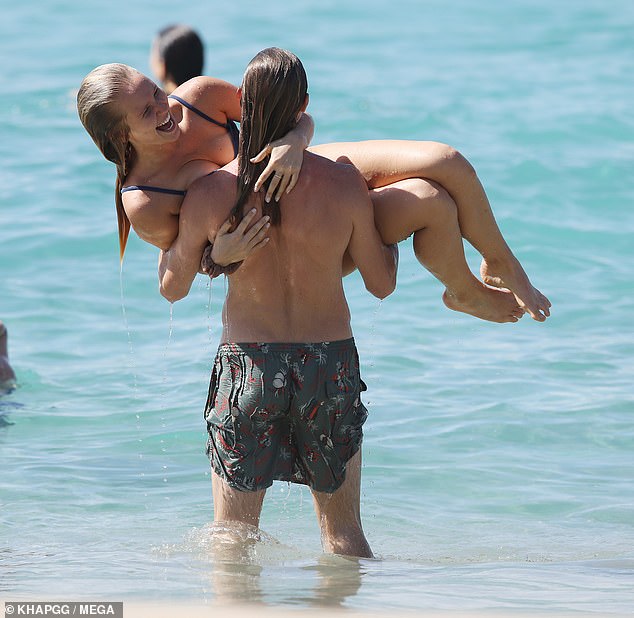 Sailor looked sensational in a skimpy navy bikini that showed off her slim figure.

Her wet locks were slicked back off her face and she appeared to go makeup-free.

The Sports Illustrated model enjoyed a dip in the ocean with Ben, who she has been linked to since December.

Svelte: The American model looked sensational in a skimpy navy bikini that showed off her slim figure 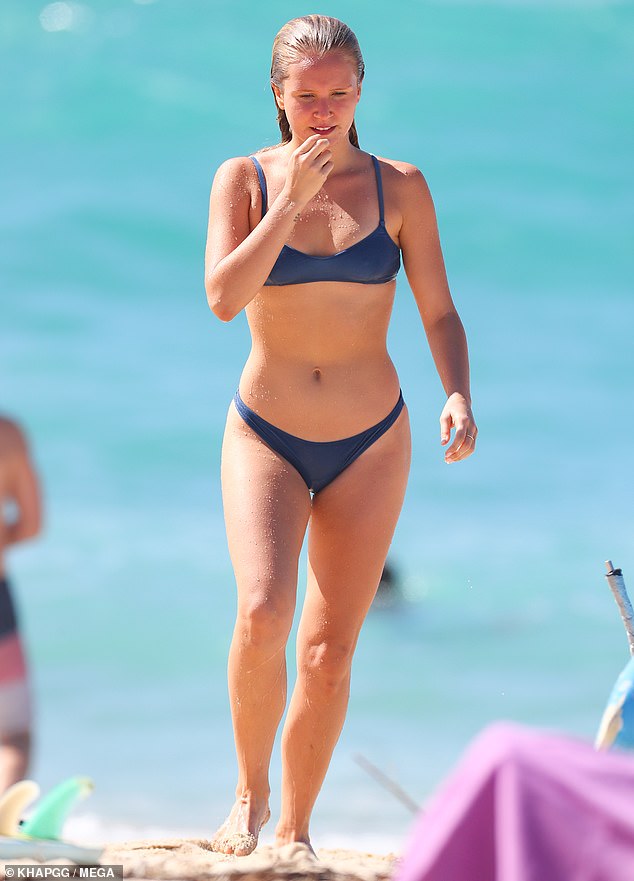 Natural: Sailor’s wet locks were slicked back off her face and she appeared to go makeup-free 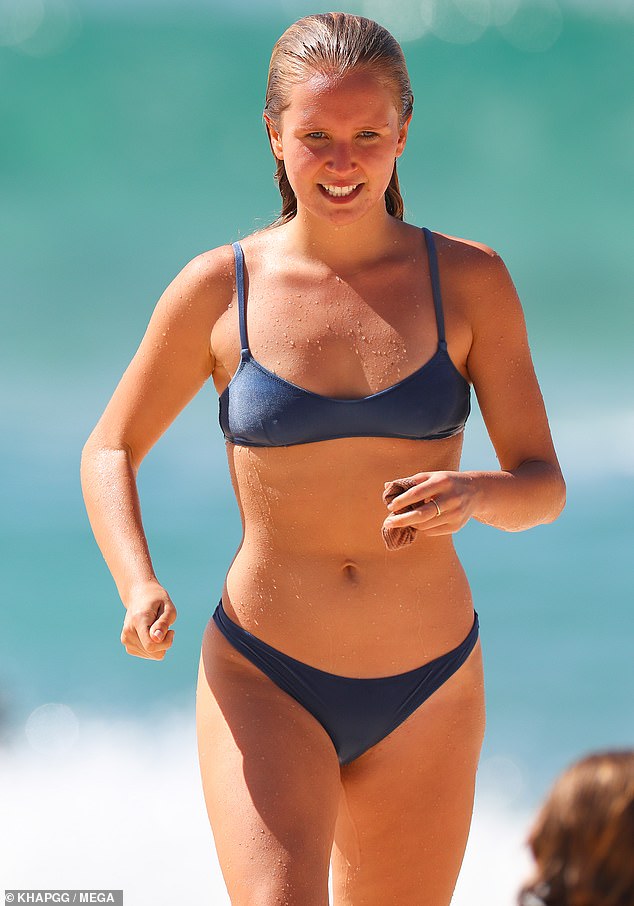 Long-haul flight: The beauty appeared fresh-faced, despite having only arrived from Los Angeles on Friday 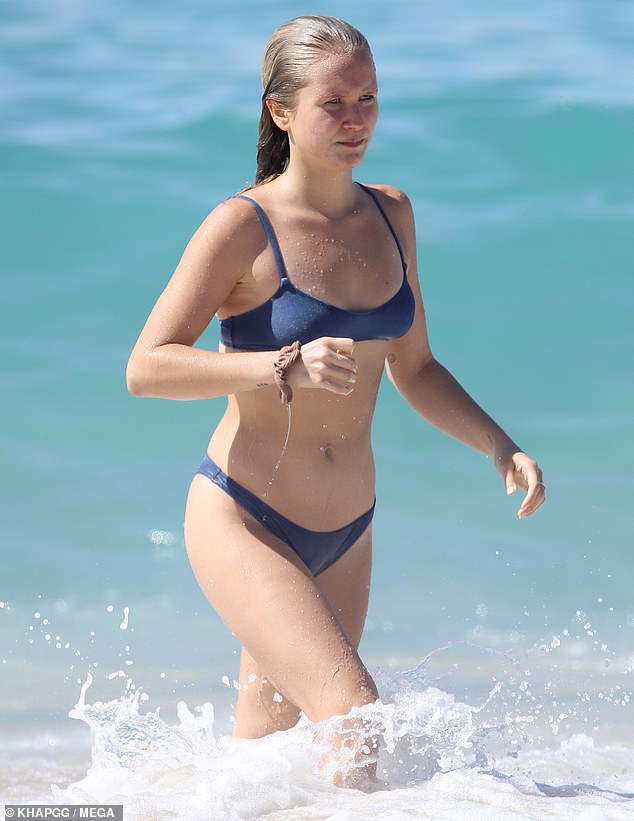 Beach babe: Sailor showed off her enviably slim figure as she frolicked in the surf

Clearly smitten, Ben carried the Sports Illustrated model in his arms and later leaned in to lock lips.

That same day, the couple were pictured breaking out into a sweat as they ran along the boardwalk from Sydney’s Bondi to Bronte.

Reputation: Sailor looked every inch the Sports Illustrated model as she emerged from the surf 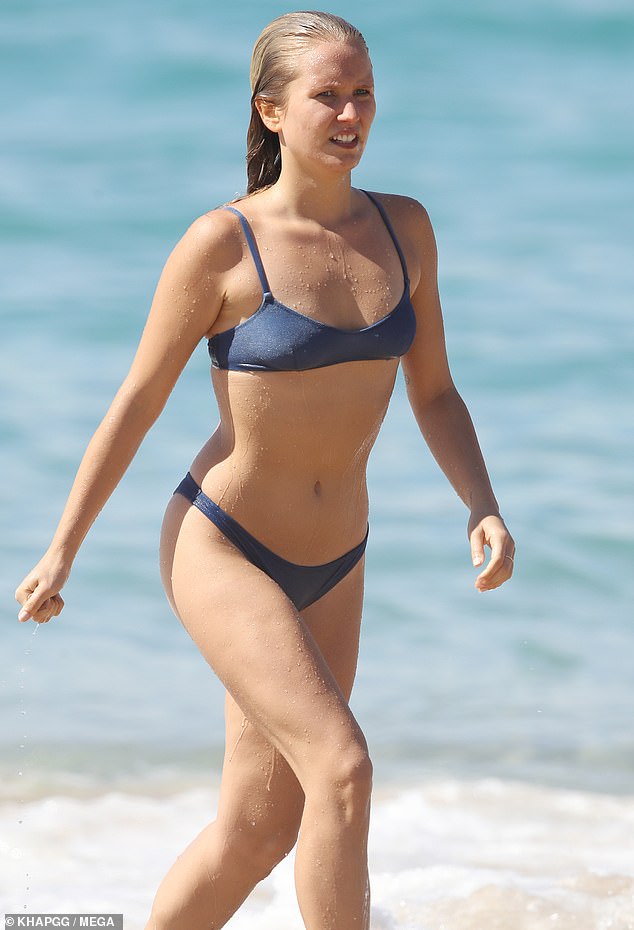 Change of scene: Sailor, who is signed to international modelling agency IMG, relocated to Sydney earlier this year

In demand: Since relocating, Sailor has already been booked on several photoshoots 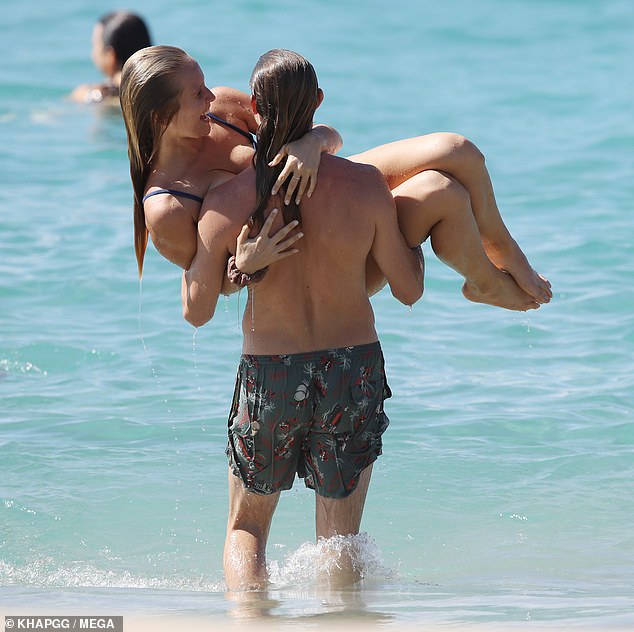 Affectionate: On the beach outing, Sailor and Ben packed on the PDA for all to see

She kept light on her feet with black Nike trainers and swept her blonde tresses into a topknot. 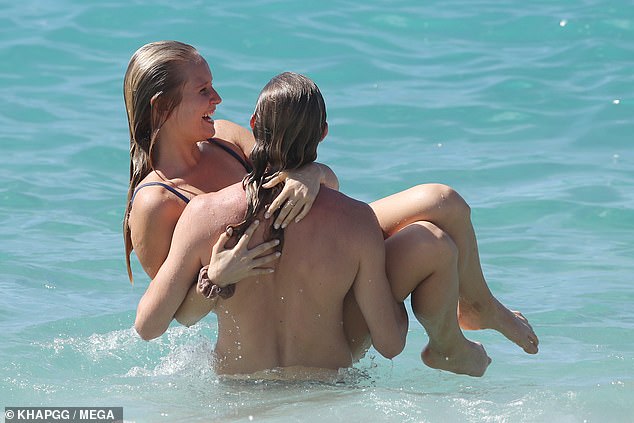 All smiles: Sailor appeared carefree as Ben carried her in his arms 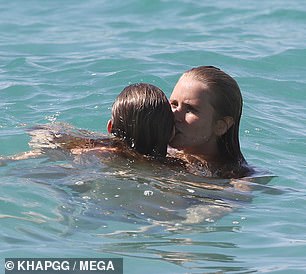 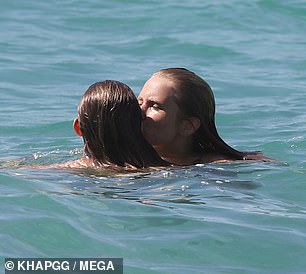 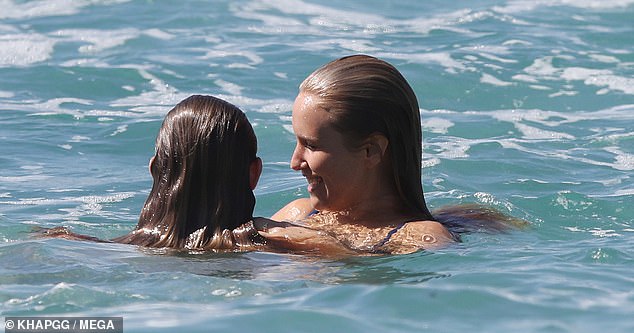 Love’s young dream: The couple could not take their hands off one another 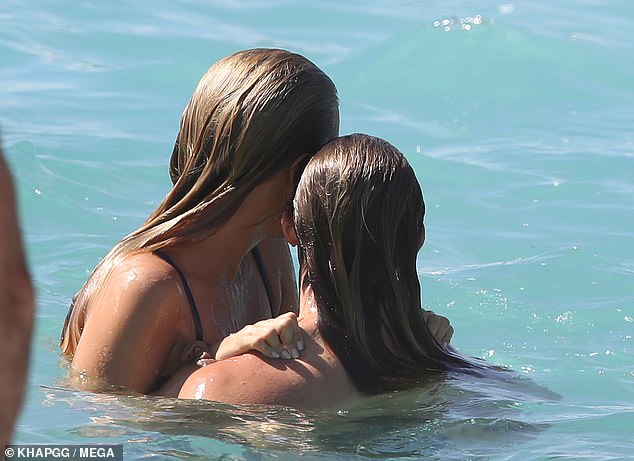 Hands-on: Ben held onto his stunning girlfriend in the surf 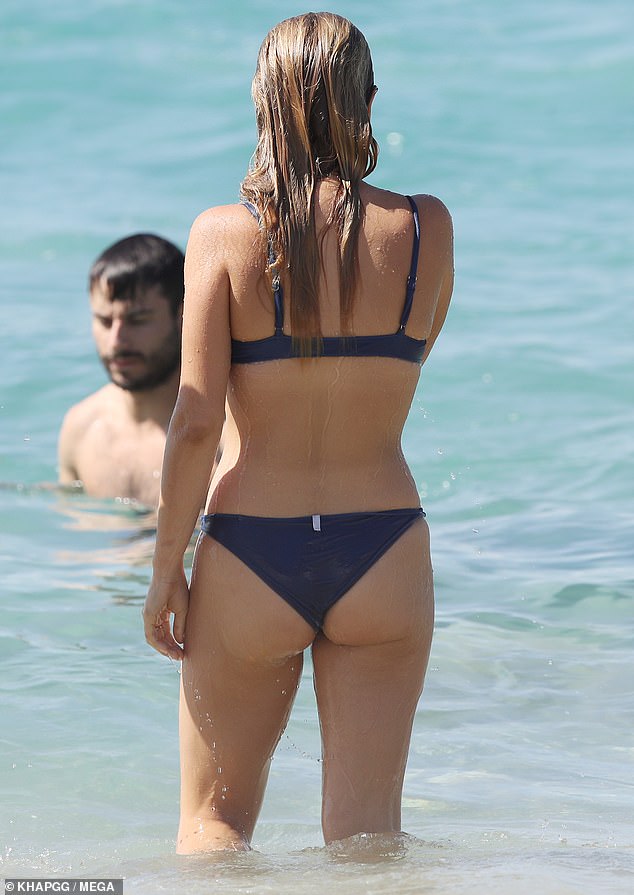 Perhaps having worked up an appetite, the pair were seen that afternoon strolling hand in hand in the trendy locale.

Ben, who is a friend of Sailor’s brother Jack Brinkley-Cook, has been linked to the blonde beauty since December.

The couple have been seen together on multiple times in recent months, including on a trip to Miami in February, and the Caribbean in December. 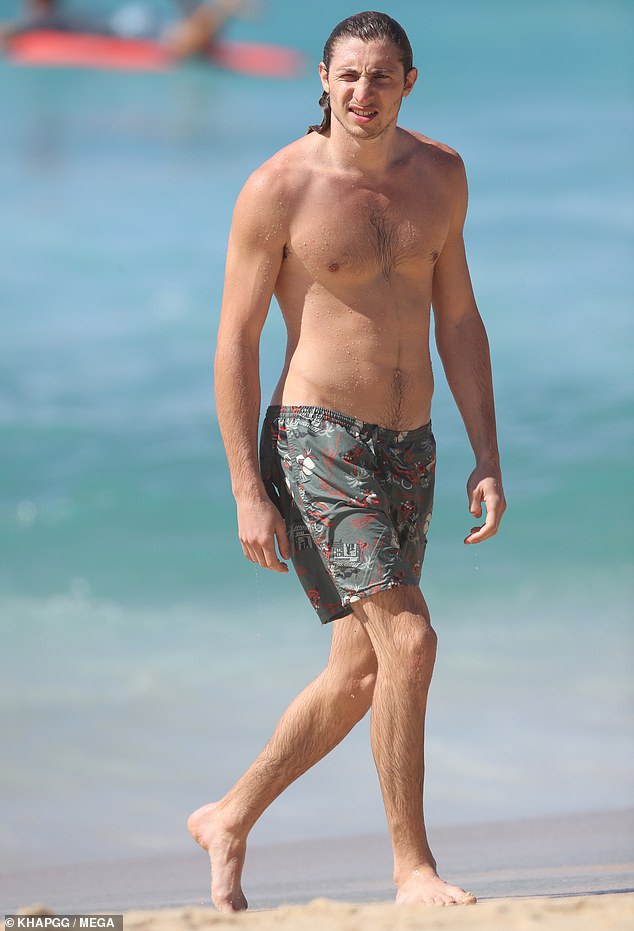 Attire: Ben, who is a friend of Sailor’s brother Jack Brinkley-Cook, wore green patterned boardshorts on the beach outing 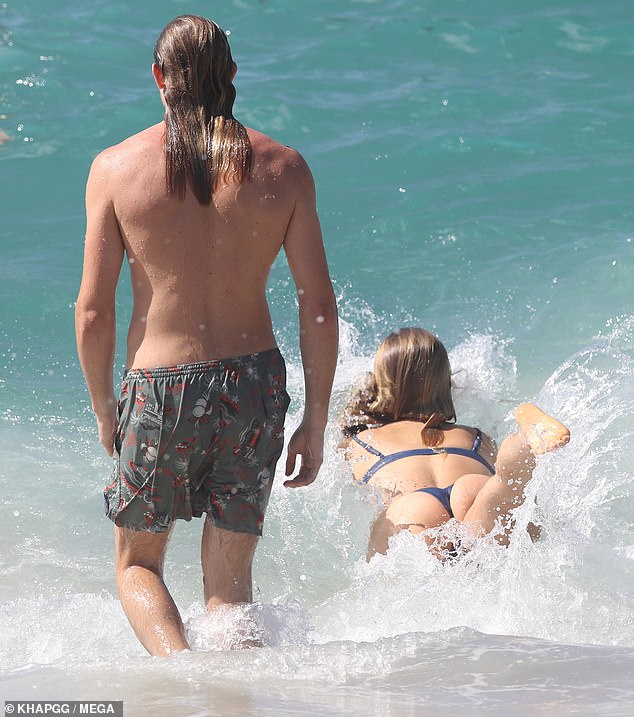 Sightings: Ben and Sailor have been linked together since December 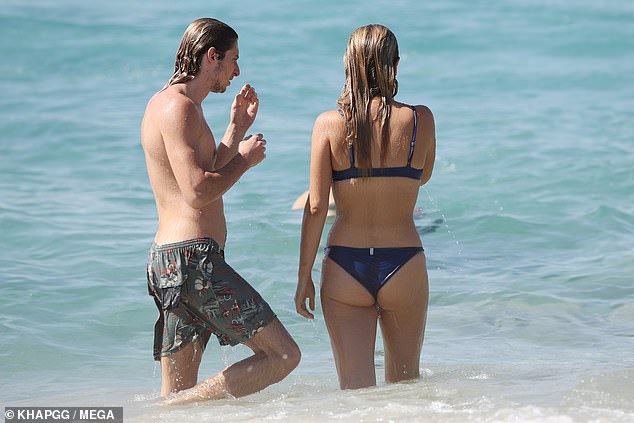 Jet-setters: The couple have been seen together on multiple times in recent months, including on a trip to Miami in February, and the Caribbean in December

Sailor, who is signed with international modelling agency IMG, relocated to Sydney earlier this year.

After Sailor’s home was invaded by intruders in January, she has since moved to a safer place. 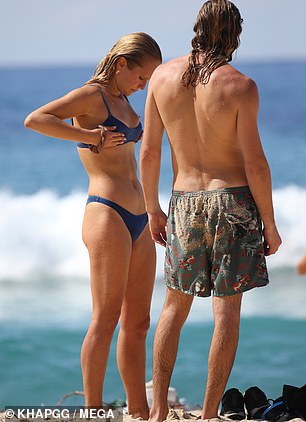 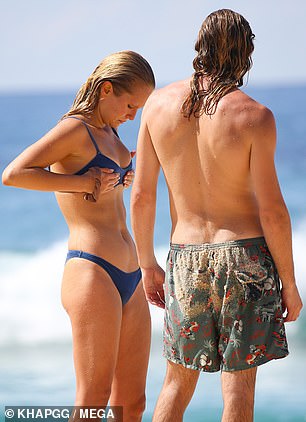 All okay: At one stage, Sailor was seen readjusting her bikini top 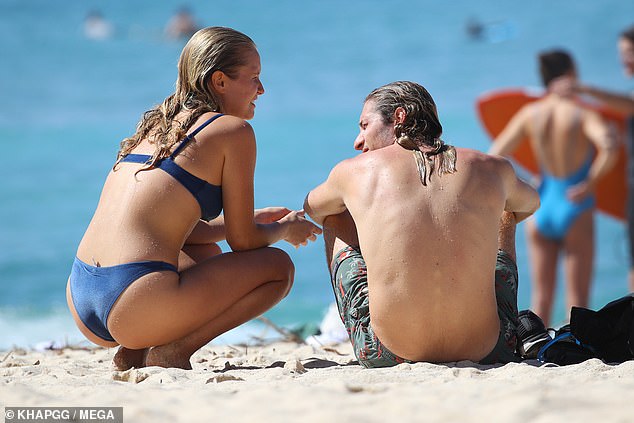 In each other’s company: The couple soaked up the sun and engaged in conversation 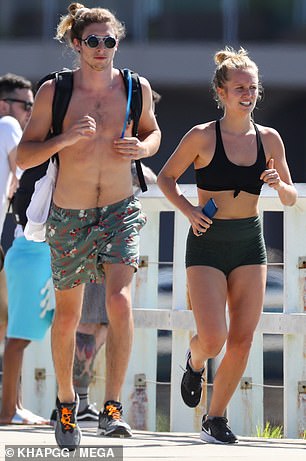 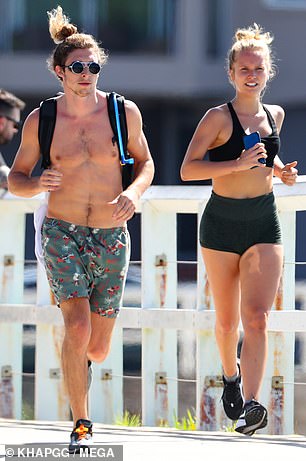 Breaking a sweat: That same day, the pair were seen pounding the pavement from Sydney’s Bondi to Bronte

Sailor’s supermodel mother Christie told Extra TV: ‘The first call I get from her: ”Mom, Mom, there’s two guys in my door, one is shirtless with a ski mask over his head and they’re hanging on the neighbour’s door”.’

Christie, 65, told Sailor ‘not to move’ and to ‘keep your doors locked.’

‘Now she’s in a good place… It was really scary,’ Christie added. 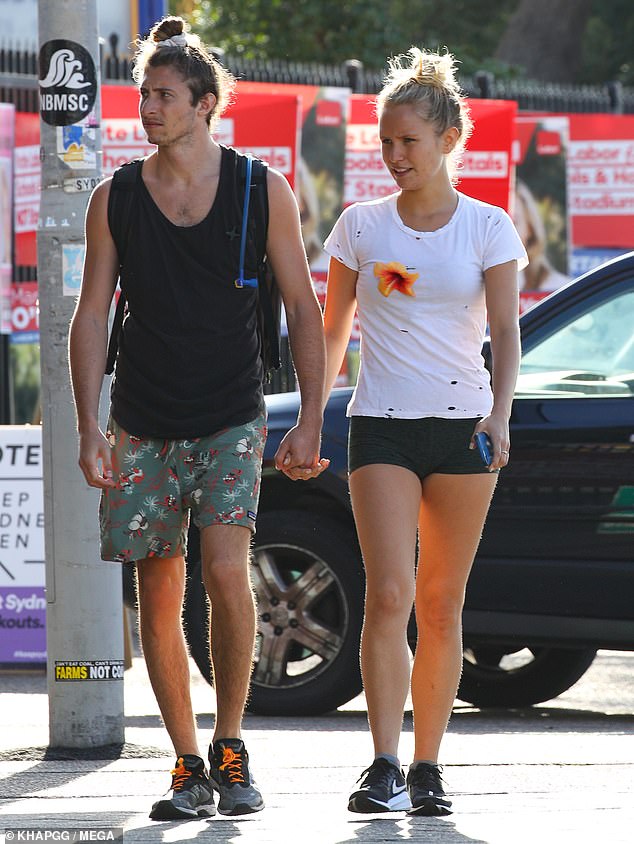 Stroll: Sailor and Ben also were pictured strolling hand in hand on the same day