Americans increasingly think that e-cigarettes are just as bad for people – if not worse – as combustible cigarettes, a new study reveals.

The numbers of people who think vaping is as bad as and worse than smoking have both tripled since 2012.

In reality, vaping is certainly not ‘healthy’ – it forces the heart and lungs to work harder – and there is still a great deal we don’t know about its effects,  but it is considerably less dangerous than smoking.

Researchers at Georgia State University (GSU) say that the public has received mixed messaging about the safety of e-cigs, leading to confusion and wariness.

Essentially, the way we talk about risk when we talk about e-cigarettes is making media reports of lung and heart risks misleading to to a public that believes that if the devices are dangerous at all, they must be as bad as cigarettes. 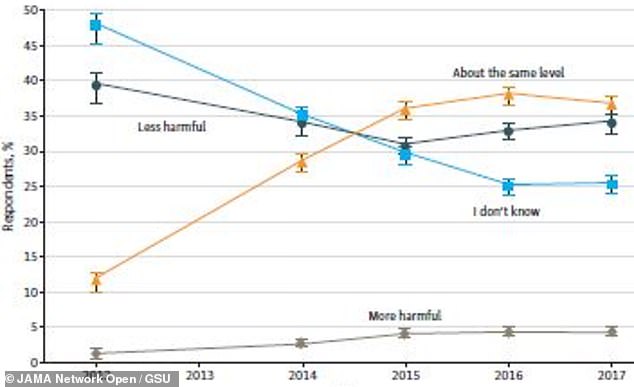 Since 2012, the number of people who believe e-cigarettes are as bad as cigarettes has tripled (orange). The number of those who think vaping is worse has also tripled (gray)

Or at least to encourage them to cut out the lung cancer-causing smoke and chemicals in cigarettes.

But it didn’t take long for the devices to become the latest greatest teen vice – especially the sleek, USB-like Juul, which teens bought in droves.

That launched a Food and Drug Administration (FDA) war on e-cigs and call for research on what vaping might actually be doing to American youth.

Since then, Juul has been slapped with demands to discontinue its sweet flavors and abruptly halt its trendy marketing campaign and a slew of studies on the short term health effects of e-cigarettes have come out.

These studies have found that vaping has very similarly detrimental effects on the heart and lungs to those of combustible cigarettes.

And the heating of certain flavors of e-liquid – especially the sweet ones – used in the devices may turn compounds called terpenes carcinogenic.

Plus, horror stories of exploding e-cigs and the toxicity of ingested e-liquids have cast a shadow of doubt over the vaping industry.

But, all that said, experts still believe that e-cigarettes do far less health damage than their combustible cousins.

Combustion – or the burning of tobacco plant matter and other substances in cigarettes – is what produces the most toxic compounds in cigarette smoke, and inhaling it exposes the body to these carcinogenic compounds.

Cutting that process out of the nicotine equation significantly reduces harms, compared to smoking.

So the risks of vaping are lower than those of smoking, but higher than doing neither.

This is where the confusion comes in. Scientifically speaking, this is the difference between ‘absolute risk’ and ‘relative risk.’

Research suggests that choosing vaping over smoking will lower a person’s individual, absolute risk of diseases like lung cancer.

But using e-cigs in general increases relative risks of heart and lung problems, the GSU study authors point out.

And despite cutting combustion out of the nicotine-delivery process, we’re learning more and more about how nicotine itself may stress the heart and cardiovascular system.

The stimulant makes blood vessels narrow, which in turn forces the heart to work harder.

Plus, the technology and processes involved in heating up e-liquid may release tiny particles of metal and other substances that have no business in human lungs.

The bottom line is that vaping means inhaling substances besides the air in our atmosphere that we are meant to breathe. So vaping is not safe.

And e-cigarettes are really too new for us to know what their long-term effects will be.

But we know a great deal for certain about the host of horrible diseases the smoking not only raises risks for, but causes.

So the Georgia State University team is urging for clearer communication about the risks and benefits of vaping, in the hopes that fear-mongering won’t dissuade smokers from making the switch, but marketing won’t pull in non-tobacco users and teenagers.