A new vaginal ring birth control that lasts for a whole year can prevent 97 percent of unintended pregnancies, a new study shows.

Every month, women have to pick up a new NuvaRing from the pharmacy, then place it themselves at home.

It might be a good option for women who would like to be able to use a single contraceptive system for longer, but would like more control over it than they would get with long-acting IUDs.

Yale University OBGYN Dr Mary Jane Minkin explains why, if nothing else, the Annovera may be a particularly convenient option for women, once it comes to market. 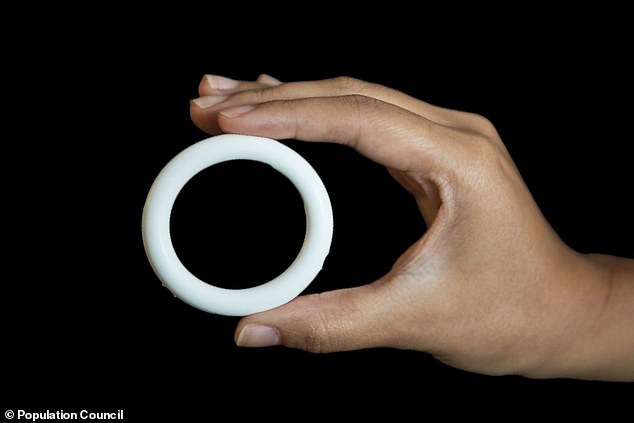 The Annovera (pictured) is a flexible, one-size-fits-all ring that effectively blocks 97 percent of pregnancies and can be reused every month for a year

There are fourteen ways to prevent a pregnancy:

Depending on the form, birth control is anywhere from about 70 to 90 percent effective at preventing pregnancy.

More women than ever are using some form of birth control in the US, but  that accounts for just 65 percent of reproductive age women.

With so many options, choosing one that’s right for comfort, protection, price and side effect profile is crucial to be sure that contraception gets used properly and to maximum effect.

More and more women are opting for longer-acting contraception, like the IUD as many worry about future access to contraception and hope for more guaranteed protection than single-use condoms or pills that have to be taken daily can provide – and it’s 99 percent effective.

But for others, the idea of having a foreign object inside them for years, or the possibility of painful insertion and removal are disconcerting.

The popular pill is 91 percent effective, but only if you take it daily.

So a ring is sort of a middle ground between long- and short-acting birth control.

Annovera is a flexible white ring that a woman pinches and inserts into her vagina.

It starts working immediately, and should be left in for 21 days of the menstrual cycle – including during sex – and removed during seven days of menstruation.

One of the system’s main draws – but potentially a drawback, too – is that it is reusable for up to a year (or 13 menstrual cycles).

That’s good news in that women don’t have to get and fill a new prescription each time, but it does mean manually removing Annovera, washing it properly and storing it in its case until her period ends.

It may be a good option for women who don’t want the hassle of going to the doctor or pharmacy, but not so much if you are not comfortable enough with your body to do the monthly insertion and removal yourself.

Like most hormonal birth control (including NuvaRing, the pill, the patch and IUDs besides the copper one), Annovera uses a progestin and estrogen to prevent an egg from being fertilized.

But it uses a different progestin from its cousin, the NuvaRing.

The progestin in NuvaRing (and other forms of hormonal birth control) interacts with estrogen and androgen receptors.

Androgens are male hormones, like testosterone, and progestins that interact with these receptors may increase the likelihood of unwanted hair growth, acne and may contribute to weight gain.

Progestins that have significant estrogenic effects may help offset those unwanted side effects triggered by the androgen receptor activity.

The new progestin is called segesterone acetate and binds only with receptors for progesterone – not estrogen or androgen ones – and Annovera also contains estrogen.

This could mean that segesterone has fewer side effects, but it’s too soon to tell.

‘Progestins are a very interesting class of compounds. The world is all good with estrogen, the world is not so good with progesterones,’ and their synthetic forms, progestins.

But they are key to preventing pregnancy.

Some kinds of progestins may cause weight gain, but help keep women’s skin clear, others may help women shed pounds, but send their skin or moods haywire.

‘That’s when I start singing “you can’t always get what you want,”‘ says Dr Minkin.

It won’t be until Annovera comes to market that she and other clinicians will know just what its new synthetic hormones do in terms of side effects.

But Dr Minkin is looking forward to that day (which hasn’t been announced).

‘Just the fact of having something in the house is a good thing.

‘The major problem in the US is unintended pregnancy, and if I have something to make my patients easier because they don’t have to run to the pharmacy on Sunday,’ then Dr Minkin is for it.