A woman whose mother was told to put her in a care home after a car crash left her quadriplegic at just 18 has set up her own rehab centre.

Amanda Perla, now 29, of Orlando, Florida, broke her neck and almost completely severed her spinal cord when her friend fell asleep at the wheel in 2007.

The crash left Ms Perla a C6 incomplete quadriplegic – injured at the spinal cord near her neck and paralysed from the chest down.

Ms Perla – who was meant to be starting university in the next few weeks – spent the next six months learning how to use a wheelchair in a rehabilitation hospital.

After her mother was told by doctors there was nothing more they could do and Ms Perla – who is engaged – should be put in a home, the pair launched the rehab centre NextStep Orlando. 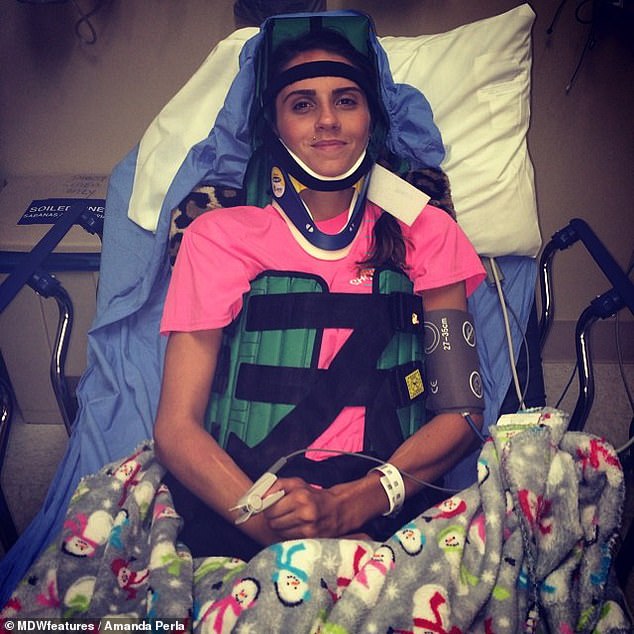 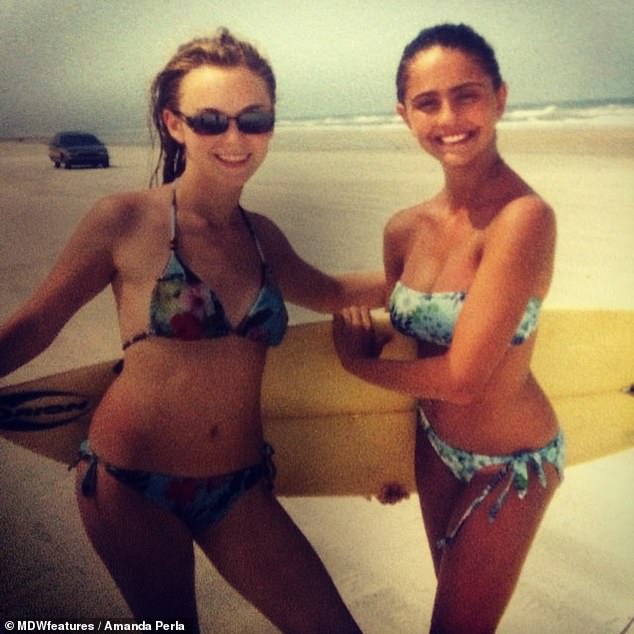 Pictured right before the crash with a friend, Ms Perla was sleeping in the passenger seat when the driver fell asleep on April 21 2007. ‘In a split second my life changed forever,’ she said 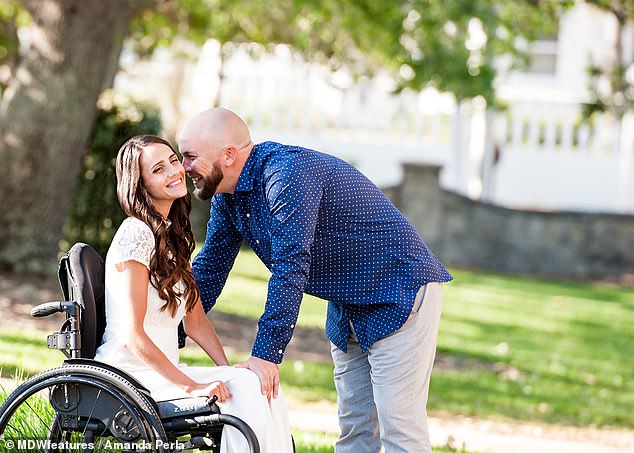 After her mother was told to put her in a care home, Ms Perla has defied expectations and is speaking out to inspire others. She is pictured with her fiancé Matt, who she will marry in May

Speaking of the accident, Ms Perla said: ‘I had just turned 18 and was a month away from graduating high school when in a split second my life changed forever.’

The driver was uninjured and walked away from the scene of the crash.

‘I planned to study at a state university but instead of attending graduation and spending the summer with my friends, excited about the future, I spent the next six months at a rehabilitation hospital learning to live life in a wheelchair,’ Ms Perla said.

Ms Perla, who has always been sporty, was told she would never walk or live independently again.

‘There were so many things I couldn’t do, like sit up, brush my teeth, eat, go to the bathroom, cough, sneeze, scratch an itch,’ she said.

‘I was so focused on those things that I didn’t really think about walking straight away.’

Despite her prognosis, Ms Perla does not accept she will be wheelchair-bound for the rest of her life.

‘It took a while to sink in that I couldn’t walk anymore but I still refuse to believe I will never walk again and at the very least, I’ll die trying,’ she said.

Although the rehab hospital helped Ms Perla learn how to be active while in a wheelchair, she wanted to try and move her legs.

‘Because I had no voluntary movement below my level of injury, they refused to do things like put me on a treadmill, something I think is still a huge problem in the rehabilitation of spinal cord injuries in hospitals today,’ she said. 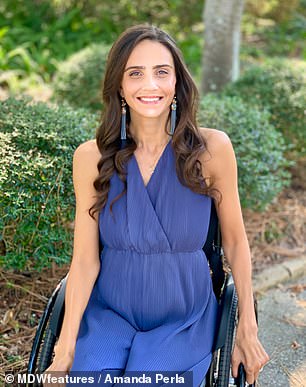 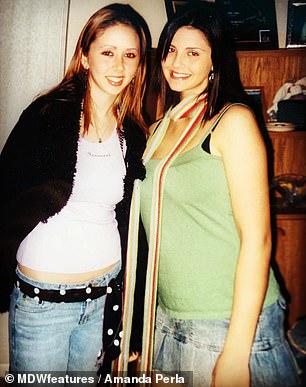 Ms Perla (pictured left in her wheelchair) refuses to accept she will never walk again and said she will ‘die trying’. Pictured right aged 15, Ms Perla was looking forward to graduating from secondary school and starting uni, but the accident meant she spent six months in rehab 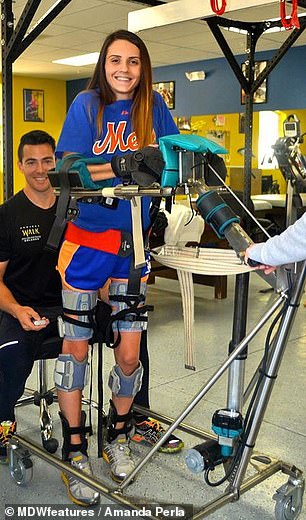 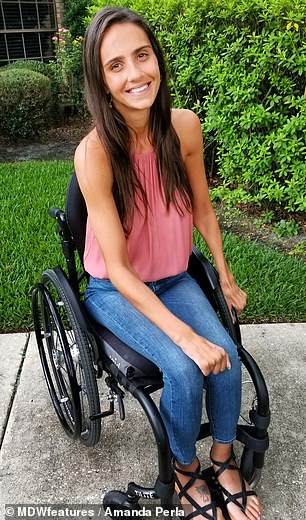 Ms Perla is pictured left in rehab trying to improve her leg function. Although it showed her she could be active while in a wheelchair, she wanted to try running on a treadmill. Six months on from the ordeal, Ms Perla (pictured right recently) felt ready to go home but still needed help 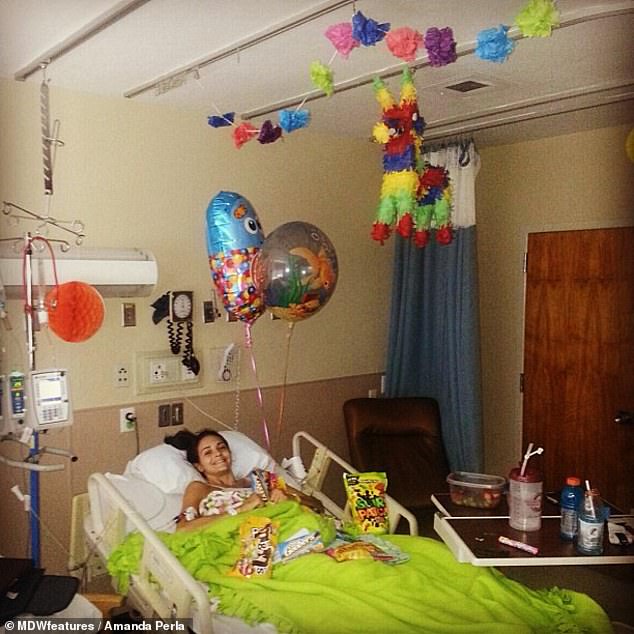 WHAT IS A C6 INCOMPLETE QUADRIPLEGIC?

The cervical spinal cord is the uppermost region of the vertebrae and is in the neck.

The higher the injury to the spine, the more severe the damage and the more likely it will be life threatening.

A C6 spinal cord injury affects the lower end of the backbone near the base of the neck.

‘Incomplete’ means the ability of the spinal cord to convey messages to or from the brain is not completely lost.

Although a quadriplegic cannot move their limbs, ‘incomplete’ often means they still have some sensation in their arms and legs, even if it is faint.

Some quadriplegics have been able to regain some function once swelling goes down or if they have surgery to remove something pressing on their spinal cord.

Although it is unclear how many people are C6 incomplete quadriplegic, around 1,200 people are paralysed each year in the UK, BBC reported.

In the US – around 5.4million people are living with paralysis, according to the Christopher & Dana Reeve Foundation.

Six months on from the ordeal, Ms Perla felt ready to go home.

‘But at the same time, I was scared and ill-equipped as we didn’t have the necessary care, like skilled nurses, arranged,’ she said.

‘We didn’t have transportation for my electric wheelchair nor ramps to enter my home, or roll-in showers to wash.’

‘So, the staff told my mum she could just put me in a nursing home.’

Refusing to give up on her daughter, Ms Perla’s mother quit her job to look after her.

‘My mum says all the time that she was just a frustrated mother wanting to do the best she could for her daughter,’ she said.

Together, they found the exercise-based recovery centre NextStep in California and decided to launch a branch in Florida.

‘We knew right away this was a programme I needed to be a part of permanently and it needed to be accessible to others with paralysis in the South East as well,’ Ms Perla said.

‘So, I decided to do something about it and start NextStep Orlando, a not-for-profit paralysis recovery centre, in 2009.

‘NextStep Orlando has healed me physically, mentally, emotionally, socially, in every way it could. It gave me a whole new family, a place to belong, to thrive and to help show others that there is hope for their recovery and their future.

‘Everything we have, from the state-of-the-art equipment to our lunch table, has been donated, bought with grants or through fundraising events.’ 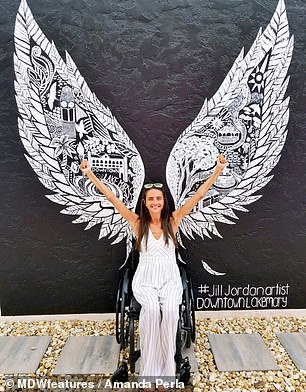 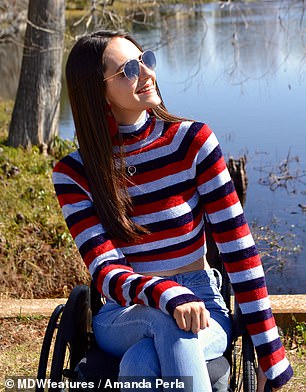 Ms Perla (pictured left and right) set up a exercise-based recovery centre in their native Florida. She has always been sporty and was motivated by a similar clinic in California 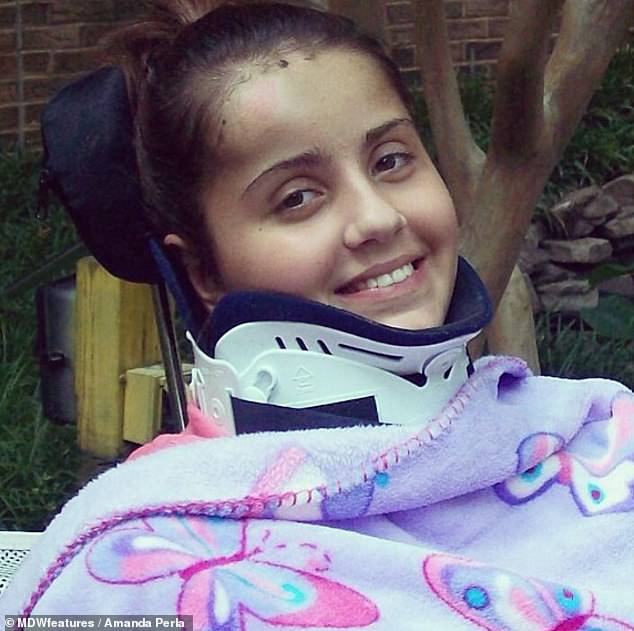 Pictured shortly, after the accident, Ms Perla was forced to wear a neck brace

Ms Perla will celebrate a decade of NextStep Orlando later this year shortly before she marries her fiancé Matt in May.

She is speaking out to inspire others who have been told there is no hope.

‘It’s hard because you have such amazing breakthroughs and reach short term goals, but then there are plateaus,’ Ms Perla said.

‘But no matter how long it’s been I just continue to tell myself to never give up. To me it’s worth the fight.

‘My sense of adventure has not changed one bit since my accident. I struggle the most with being told I can’t do something and sometimes ultimately accepting I in fact cannot.’

Since her accident, Ms Perla has been surfing, completed a 10K, gone whale watching and is set to do indoor skydiving.

‘Being able to restore hope in other people for their recovery and their future after they’ve been told there is none makes it all worth it to me,’ she said.

‘Don’t take even the smallest things, like being able to put on your own shoes, for granted because life can change in an instant.

‘Spinal cord injuries do not discriminate against age, race or gender, so be grateful for everything you have.’ 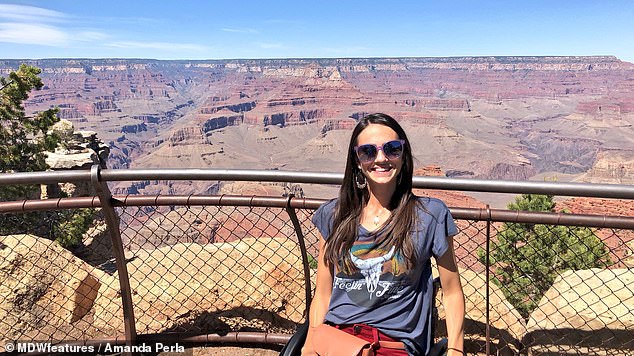 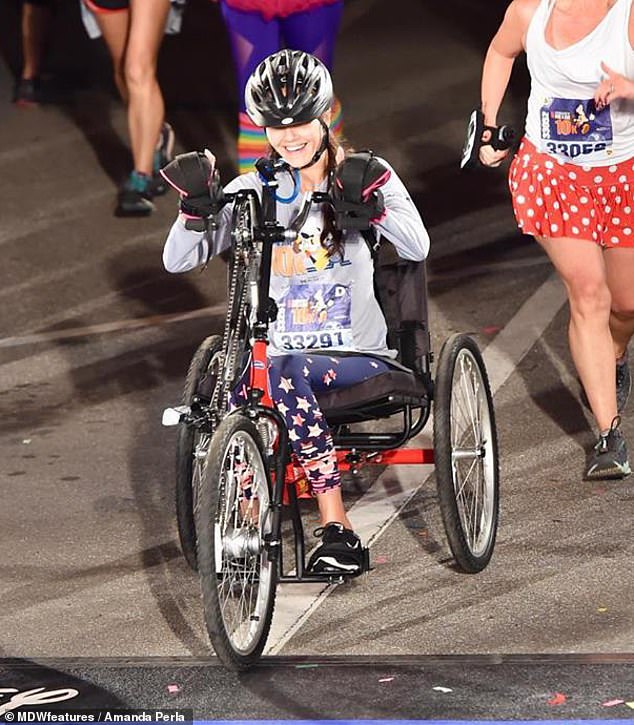 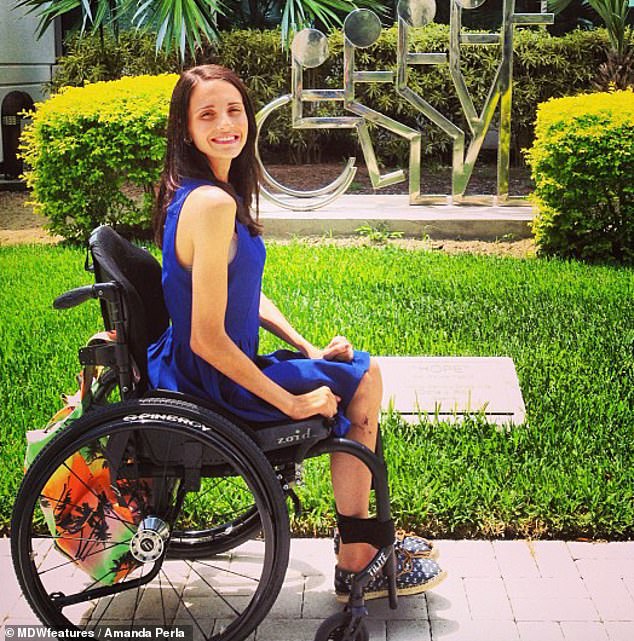