Twins with a rare condition that meant only one was developing in the womb are now thriving.

Renee Baker, 36, of Adelaide, was devastated to discover her babies were not growing as they should during her seven-week scan.

Ms Baker and her partner Gareth Norman, 31, were referred to Brisbane to meet with a specialist, who diagnosed twin-twin transfusion syndrome. This stopped one of the babies receiving enough nutrients in the womb.

Doctors recommended Ms Baker terminate the baby who was falling behind on his growth for the sake of his healthier twin, which the couple immediately ruled out.

Deprived of nutrients, Sonny had a hole in his heart and was fitted with a pacemaker on June 27. 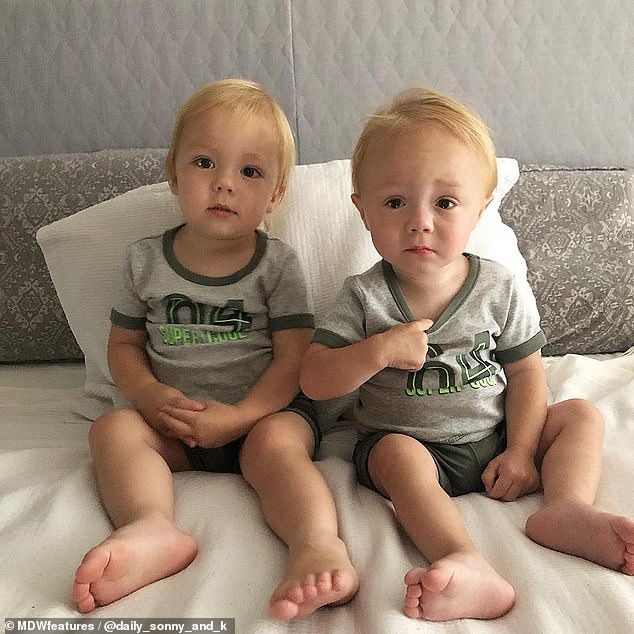 Twin boys Sonny (left) and Kash (right) are thriving, despite doctors telling their parents to abort one to save the other. The youngsters had twin-twin transfusion syndrome in the womb, which caused Sonny to be deprived of nutrients. They recently started daycare nursery 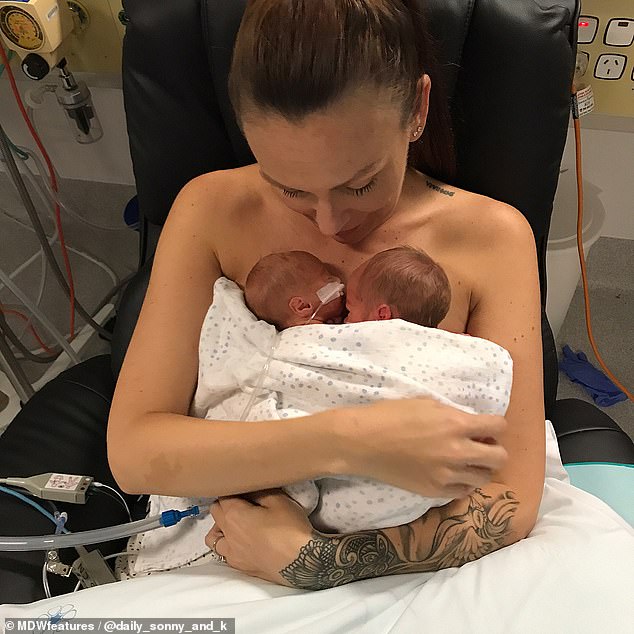 Renee Baker (pictured with her sons after they were born) refused to give up on her babies and continued with the pregnancy until she had an emergency C-section at 34 weeks on June 2 2017. The ordeal was far from over, with Sonny having a hole in his heart and needing surgery 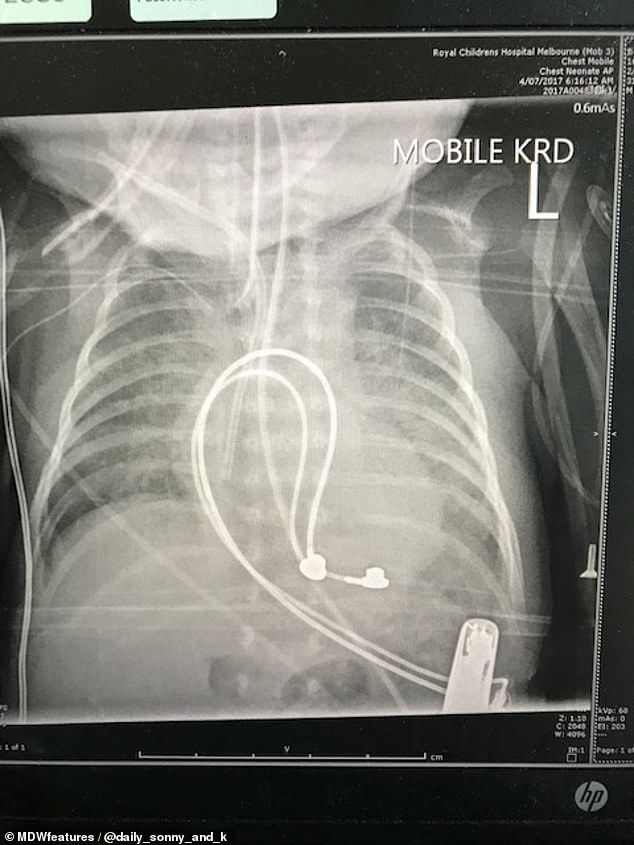 Doctors warned Sonny, who was born weighing just 2lbs 3oz, could not have open-heart surgery until he was 6lbs. But the medics decided to give him a  pacemaker anyway (pictured). The device fitted was the smallest one available, measuring the same as a ’50p coin’

Speaking of his partner’s scan, Mr Norman – who is originally from Cardiff – said: ‘At seven weeks there was already a large size difference between embryos.

‘We were referred to a hospital in Brisbane because Sonny was falling behind on growth.

‘The placenta fed more to Kash than to Sonny so at 20 weeks our obstetrician said we may have to sacrifice the small one to save Kash.

‘We instantly told the doctor no way. We were going for the both and would do anything we needed to have the best chance of Sonny and Kash surviving.’

With the couple refusing to give up on their babies, doctors warned they would not reach full-term.

The pair therefore aimed to make it to 24 weeks.

‘We were told healthy babies have a limited chance of surviving if they’re born before 24 weeks, let alone Sonny,’ Mr Norman said.

‘After making it to 24 weeks, we were then looking to make it over 1lb, then we hoped for one and a half pounds, and so on.

‘The chances of survival grew immensely with every ounce.’ 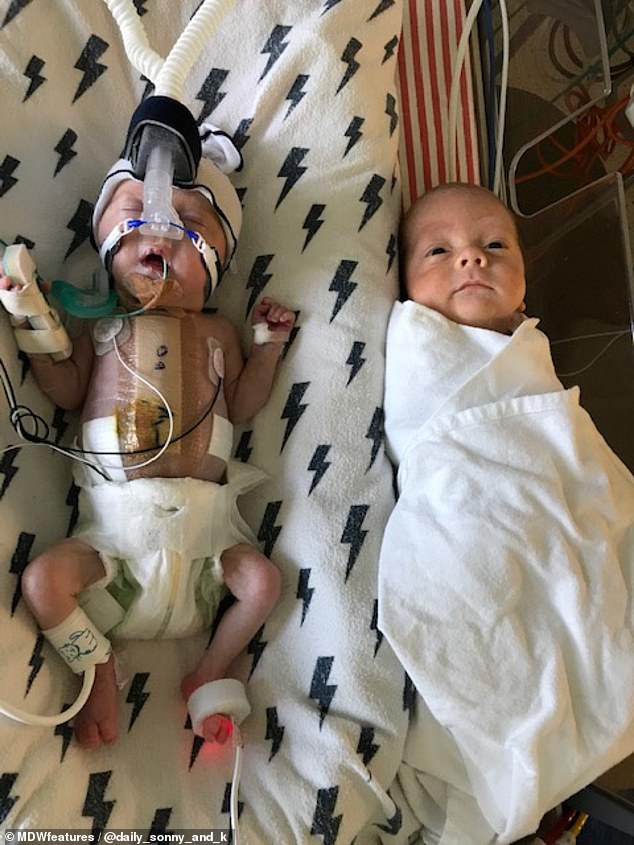 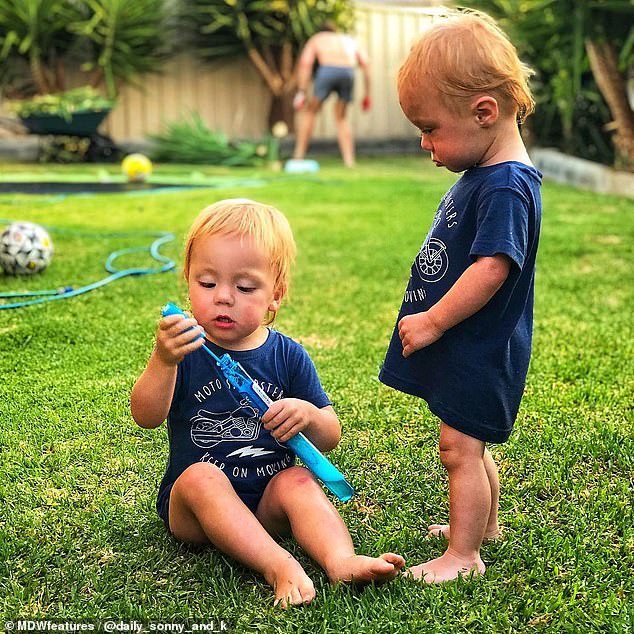 Both boys are now doing well, with Sonny lagging around six weeks behind his brother 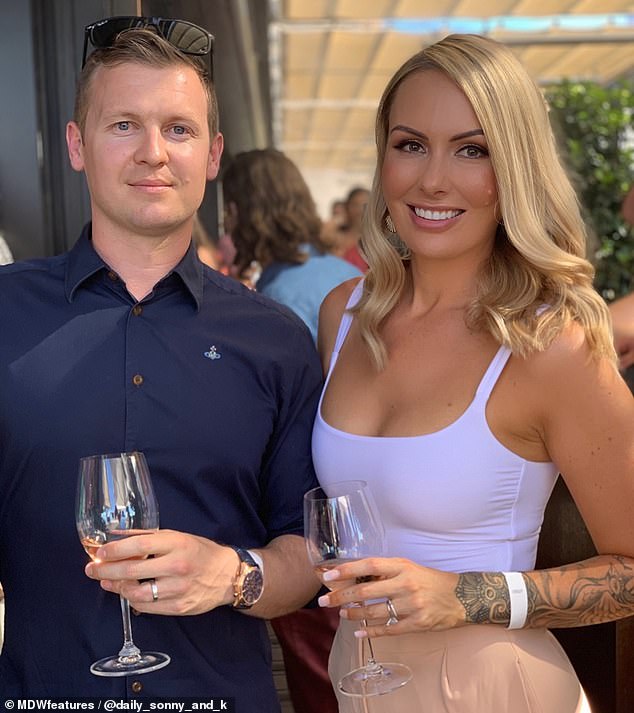 Parents Gareth Norman and Ms Baker (pictured) told doctors ‘no way’ when they suggested Sonny be terminated. They aimed to get to 24 weeks and then the boys’ to weigh more than 1lb

Once born, the ordeal was far from over, with Sonny not breathing.

Doctor managed to stabilise him, before both boys were moved to intensive care.

‘On the ward, Sonny was doing better than Kash,’ Mr Norman said.

‘Kash was happy on the inside [of the pregnancy] so he struggled slightly, whereas Sonny suddenly started receiving all the nutrition he lacked inside, so thrived.

‘It wasn’t until day 21 when they found Sonny’s heart had a hole in it and we were transferred down to Melbourne the following day.

‘Sonny was in the Royal Children’s Hospital but the only space for Kash was in Monash Hospital, on the other side of the city.’

The couple were forced to take 45-minute Ubers between hospitals so Ms Baker could breastfeed both her newborns.

Despite their best efforts, Sonny was struggling to gain weight, with doctors warning he needed to be 6lbs before he could have open-heart surgery.

But the medics decided to go ahead with the operation regardless.

‘He was one of the smallest babies to have heart surgery,’ Mr Norman said.

‘His pacemaker is the smallest on the market, around the size of a 50p piece.’ 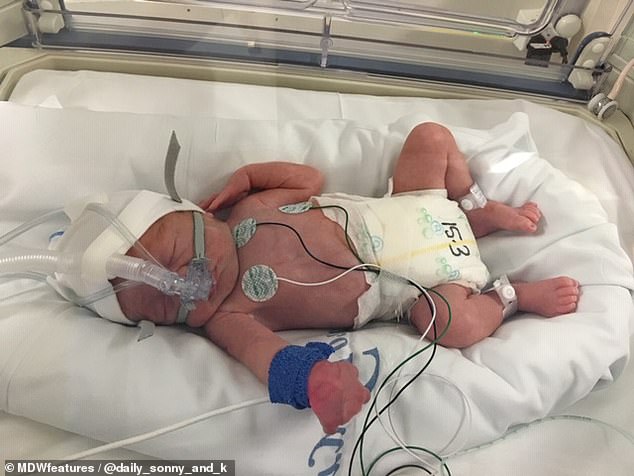 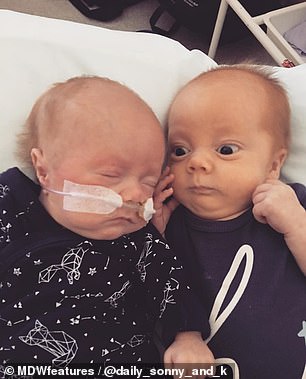 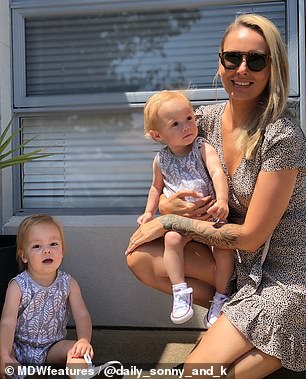 Once home, Sonny was fed via a tube (pictured left), which caused him to vomit and struggle to gain weight. Now (seen right), Sonny no longer requires his pacemaker and will have it removed. He is also ‘gaining weight nicely’, while Kash is more developed than most his age

Unlike Kash, who was released from hospital on June 29, Sonny was transferred back to Royal Darwin Hospital on July 25 and eventually allowed home on August 20, with a feeding tube through his nose.

‘There were almost daily hospital visits when we returned home, with all the focus being on Sonny and him gaining weight,’ Mr Norman said.

‘The first year at home was very tough, there was a lot of pressure on trying to get Sonny to tolerate as much milk as possible through his feeding tube.

‘He vomited most feeds and struggled to gain the weight the doctors wanted.’

The couple – who lived in Darwin – moved to Adelaide that November to give Sonny more access to specialists.

‘The boys are doing great now; Kash is ahead for his age in terms of size and development,’ Mr Norman said.

‘Sonny is lagging about six weeks behind Kash, so every time Kash does something new, Sonny does it roughly six weeks later.

‘Sonny can have his pacemaker removed because he hasn’t ever needed to use it.

‘He is gaining weight nicely too.’

Throughout the ordeal, the couple were amazed at the quality of care their family received.

‘There is a reason we have to pay taxes because the help is there when you need it.

‘The healthcare we received was excellent, but at times we had to follow our instincts and make decisions we knew were best for our situation.’

The couple are speaking out to encourage other parents to follow their intuition.

‘There were so many instances when we had mixed information, so Renee and I went home and discussed things and then did what we felt was right. 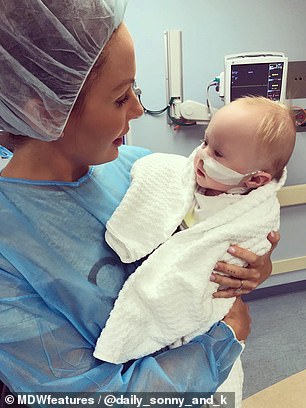 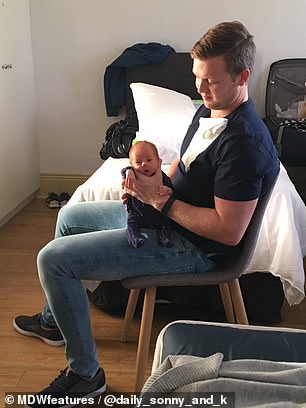 Ms Baker (pictured left holding Sonny) would go back and forth between the different hospitals the boys were staying in so she could breastfeed both, taking 45-minute Ubers. Mr Norman (pictured right holding one of his sons) called the healthcare ‘incredible’ 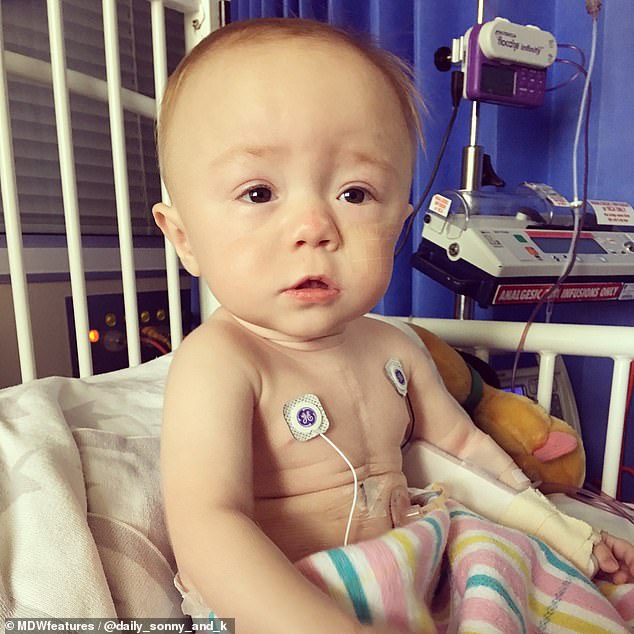 WHAT IS TWIN-TWIN TRANSFUSION SYNDROME?

Twin-twin transfusion syndrome is a rare but serious condition that can occur in identical pregnancies when twins share a placenta.

Abnormal blood vessel connections form in the placenta and prevent blood from flowing evenly between the babies.

One twin then becomes dehydrated, which affects its growth.

The other develops high blood pressure and produces too much urine.

This leads to an enlarged bladder and excessive amounts of amniotic fluid, which can put a strain on the twin’s heart, leading to heart failure.

Without treatment, TTTS can be fatal for both twins.

The condition occurs in about around 15 per cent of identical twins who share a placenta, according to the charity Tamba.

Around 300 twins die from the condition every year in the UK, while 6,000 babies are affected annually in the US.

If this is not enough, laser surgery is used to seal shut abnormal blood vessels and permanently disconnect them.

The surgeon then drains excess fluid.

Even when treated successfully, most TTTS babies are born premature.

However, the majority go on to have long, healthy lives.