There’s nothing more frustrating that forking out for an expensive pair of tights, only for them to rip or snag after a few wears, no matter how durable the manufacturers claim them to be.

But now a start-up in Canada has apparently created the toughest sheer knit on the planet – so strong that even a pair of scissors can’t easily cut through it.

Sheertex tights, which are available to buy in the UK, are made from extra strength polymer, previously only used in bulletproof vests and outdoor clothing, and claim to be ten times stronger than steel.

At the same time, the brand promises they’re comfortable to wear, don’t make you sweat underneath, and can be manipulated back into place with no fear of rips or runs when pulled out of shape.

At $99 (£75) the tights don’t come cheap. But if they do last for at least 50 wears as promised, it makes them much more cost effective than constantly replacing your £5 pairs from the high street.

Here Nilufer Atik from Surrey puts Sheertex tights to the test to find out if they really live up to their indestructible promise. 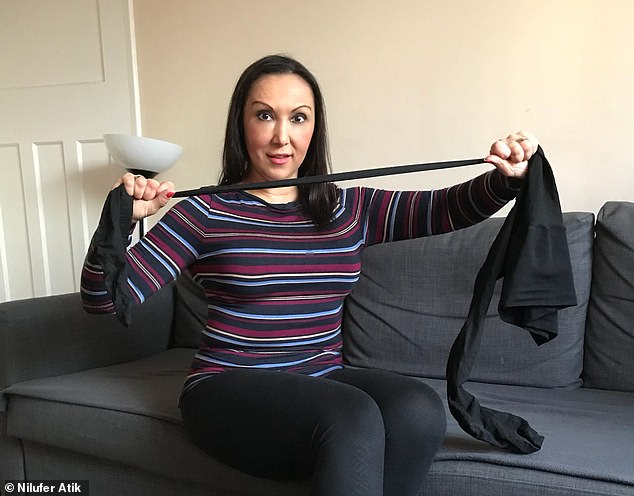 Sheertex Sheers, which have been created in a laboratory in Canada, promise to be non-rippable – and Nilufer Atik, pictured, put them to the test in her day to day life

Nilufer Atik from surrey tested out the £75 pair of ultra durable tights, to see if they could really withstand day-to-day life and was impressed by the results as they didn’t ladder even when she pulled at them with her fingernails

When you live in a country where the weather remains cold for much of the year, tights are a necessary evil.

Plus, there’s nothing better than a pair of shiny, slimming stockings to make you feel and look sexy.

But tights – or pantyhose as they are otherwise known – also come with their fair share of problems, especially for clumsy, accident prone women like me. They snag, they ladder, they stretch, and they tear.

The night I ripped my Wolford cashmere and silk ones on a splintered chair at a friend’s birthday party I actually cried. They’d been a gift from an ex-boyfriend and cost £160. 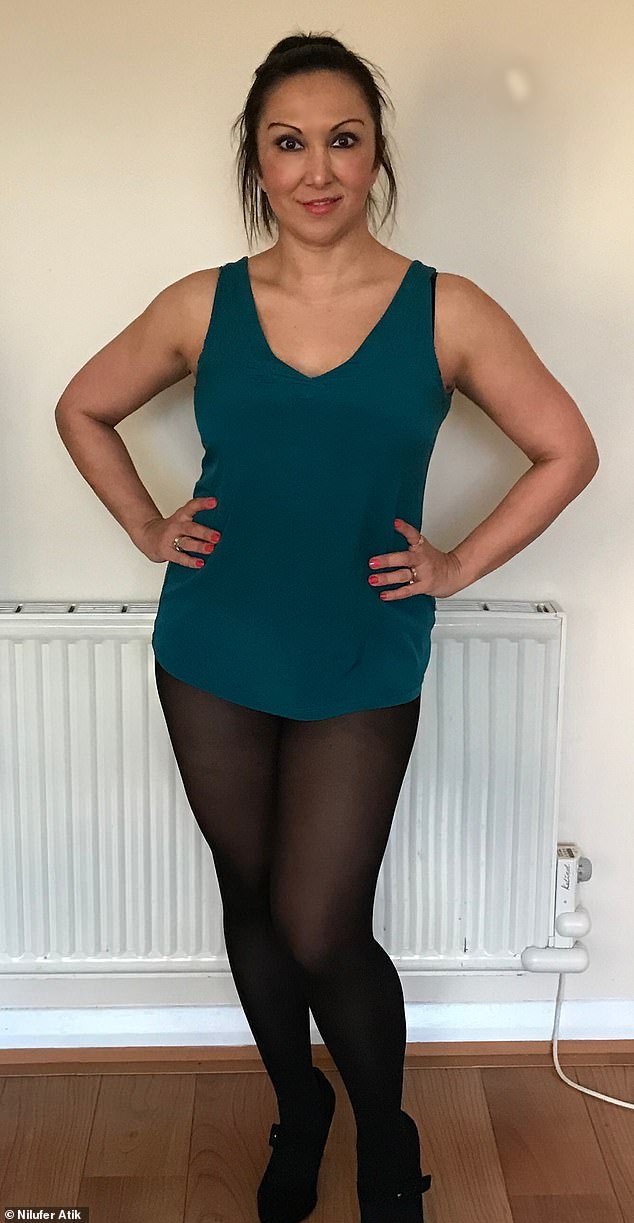 Nilufer found that the tights were a nice sheen, fairly thick and very slimming and, most importantly, looked like any other pair of 20 denier black tights

Eventually, I gave up on tights altogether, resorting to wearing trousers, leggings or long dresses or only exposing my legs if they were tanned in summer. I could have worn thick, woolen ones but they made my legs look chunky and didn’t look nice under skirts.

What are Sheertex tights made from?

Sheertex tights differ from what you can buy on the high street on ‘a molecular level’.

The knit has been developed from scratch and is produced in the brand’s lab in Canada, using a functionalized version of the world’s strongest polymer in the world.

Before Sheertex tights, the polymer was only found in specialty garments products like bulletproof vests and climbing equipment.

The high performance fibers are naturally antibacterial and stay cool to the touch.

But then I heard about a new invention, something that could revolutionise the lives of fashion-conscious women everywhere – the world’s first unrippable sheer tights. A friend in America emailed to tell me she’d tried them and had been very impressed by their durability.

After doing some research, I discovered these genius under garments to which she was referring were the Sheertex Sheers and could also be ordered in the UK online.

The first thing that surprised me about the tights was how soft and light they were. For some reason I’d pictured something akin to suit armour, but these looked like ordinary, 20 denier black tights.

They had a nice sheen and, due to being fairly thick (but not too thick), were very slimming once I got them on.

The tights had a high waistline so pulled my tummy in too – an added bonus as they made my baby belly less noticeable. 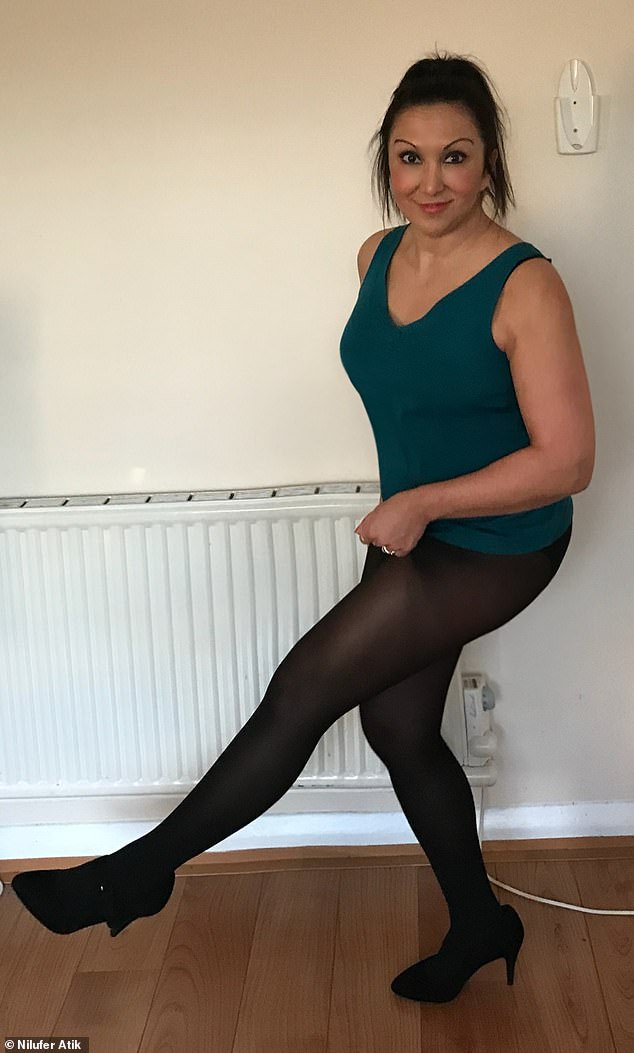 Nilufer deliberately caught the tights in the zipper of a skirt to see if they snagged, and then pulled them as hard as she could – but they still remained intact 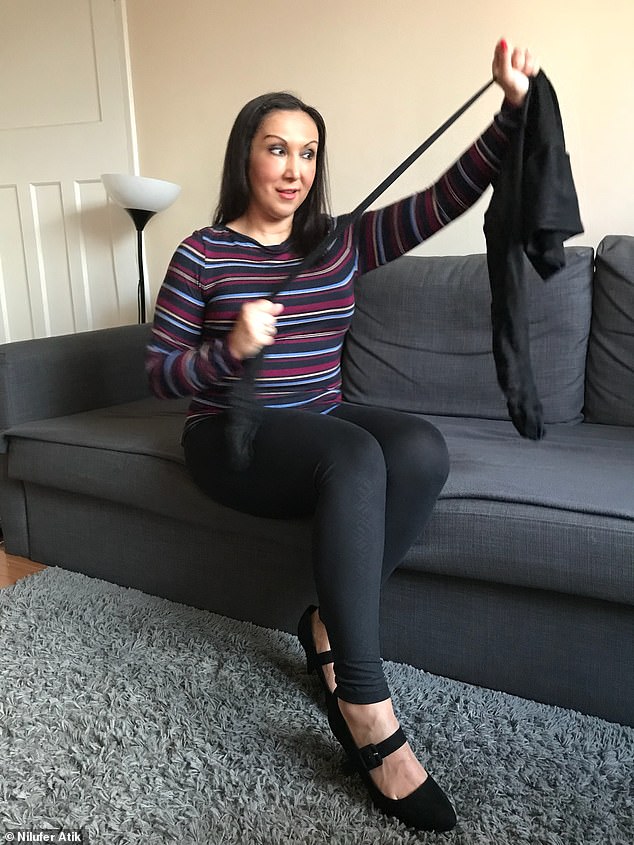 No matter how hard Nilufer pulled on the tights, which are said to be 10 times stronger than steel, they would not rip

The first test I decided to give them was my two-year-old’s toddler music and dance class.

With lots of running around, falling about, playing instruments and dressing-up, not to mention sticky, grabbing fingers everywhere, I’d normally wear cheap leggings or jeans that I didn’t mind getting destroyed.

But the tights not only managed to retain their shape, there wasn’t a single ladder or pull on them.

Next came soft play. Here they were surely bound to get ripped.

My son, Milo, had a habit of pulling me by my sweatpants towards whichever area he wanted to go to next.

Amazed, I decided to carry out the three durability tests the manufacturers use on their website to show the strength of the material – the Zipper Test, which involved deliberately catching the tights in the zipper of a skirt or pair of boots to see if they snagged. They didn’t. 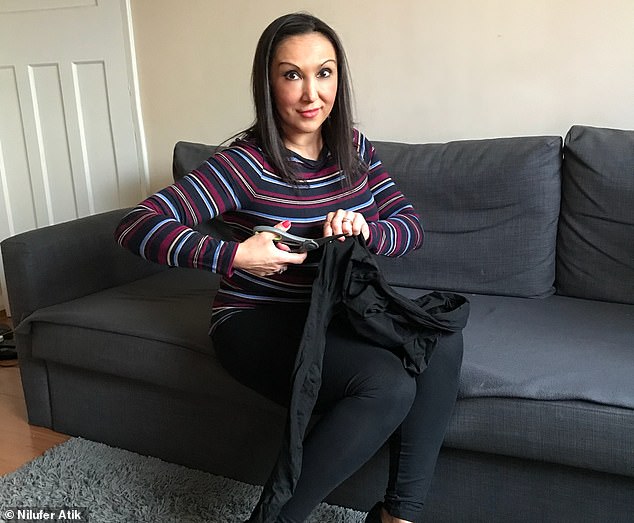 Nilufer even took a pair of scissors to the pair of tights – and even then, she found she could only create a small hole that wouldn’t rip any further on a second wear 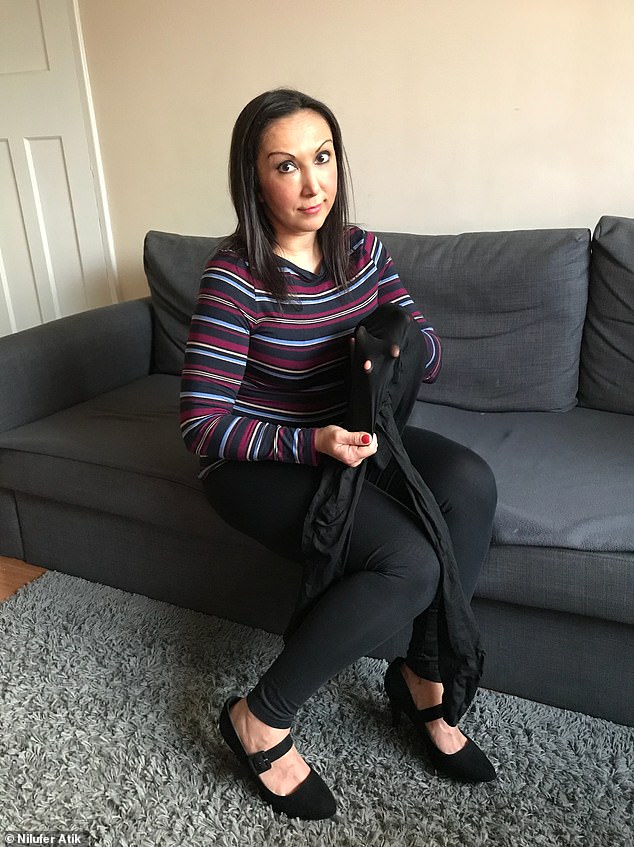 Cutting the fabric left some small holes, but these didn’t develop into ladders when the tights were worn

If I’d tried that with any of the other tights I still had stuffed at the back of my underwear drawer, they’d have instantly become footless. So far so good.

But then I took things a bit too far. Wondering if they could handle a hang nail, I ran mine forcefully along the material. They laddered, instantly. But true to the manufacturer’s claim that they can ‘often be manipulated back into place if they do get a snag,’ I rubbed and massaged the area and the ladder vanished.

It was only scissors that managed to cut through the material, and even then, they created a small hole that didn’t expand when I wore the tights again.

‘The Sheertex knit is not immune to damage, it is still fabric,’ a spokeswoman for Sheertex explained to me. ‘But what makes these such a great product is they can withstand a tremendous amount of daily wear and tear, much more than any other pantyhose on the market.’

Perhaps it is time for me to dust off my best skirts and ditch the trousers after all. 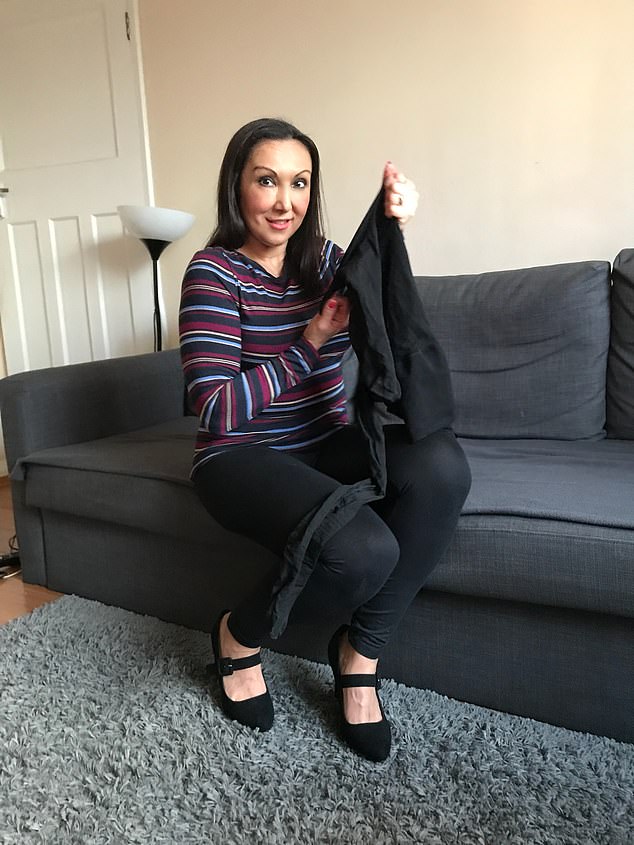 Nilufer ran her fingernails up and down inside the material, but still could not manage to cause a ladder or create a hole