A 21-year-old National Guard recruit has lost his leg as he fights for his life against a flesh-eating bacteria he contracted during basic training.

Dez Del Barba was six weeks into his stint at Fort Benning in Georgia when he began complaining of a sore throat and leg pain at the beginning of February.

An initial test for strep came back negative, but a 24-hour culture revealed he did have a strep infection, reported WRBL.

Several days passed before army staff took him to the hospital, giving him ibuproften throat lozenges instead.

By that time, physicians told Del Barba he had necrotizing fasciitis, a fast-moving infection that destroys tissue under the skin – and that it had spread through both of his legs.

Since then he’s undergone 14 surgeries at three different hospitals – including one to amputate his left leg – and doctors are now working to save the right leg. 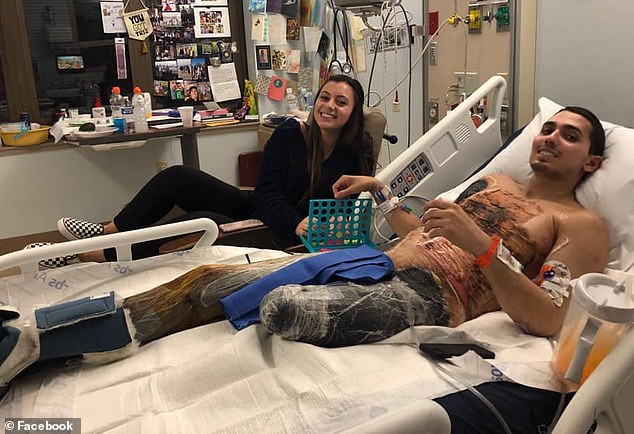 Dez Del Barba, 21, of Stockton, California, was in basic training at Fort Benning in Georgia when he began complaining of leg pain and throat pain on February 7. Pictured: Del Barba, right, after his leg was amputated 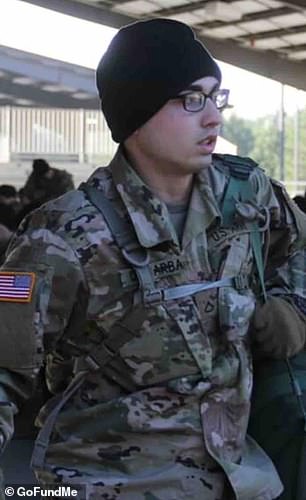 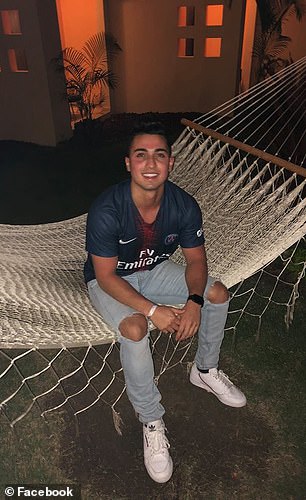 Two immediate strep tests came back negative so Del Barba was just given ibuprofen and throat lozenges. Meanwhile, a 24-hour throat culture was sent to a lab, which later came back positive. Pictured: Del Barba during basic training, left, and in California, right

Del Barba was attending Sonoma State University, when he took a leave of absence during his last semester to attend basic training, according to a GoFundMe page.

He was then planning to complete his degree and attend the Officer Candidate School of the Army.

Del Barba’s parents, Mark and Kamini, told WRBL that when their son left his hometown of Stockton, Californi,a on January 7, he was healthy.

But just one month later, on February 7, Del Barba’s throat felt sore, according to his medical records.

Two immediate strep tests came back negative so he was just given ibuprofen and throat lozenges. Meanwhile, a 24-hour throat culture was sent to a lab.

The next day, when Del Barba began complaining of leg pain, he was seen by a physical therapist.

‘Dez told us the drill sergeant continuously deterred him from asking for medical treatment for his ongoing symptoms,’ Mark told WRBL. ‘He was told he could be recycled and have to repeat the course.’

Later that Friday, the 24-hour throat culture results came back positive for group A streptococcus. A handwritten note was put in Del Barba’s medical records that read: ‘Positive for culture. Call AM Monday.’ 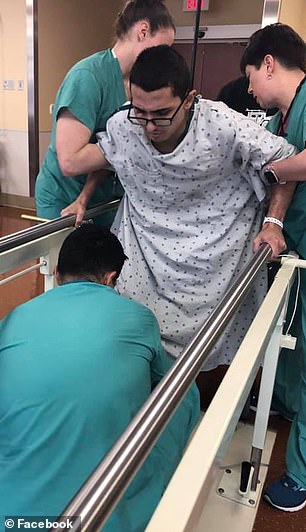 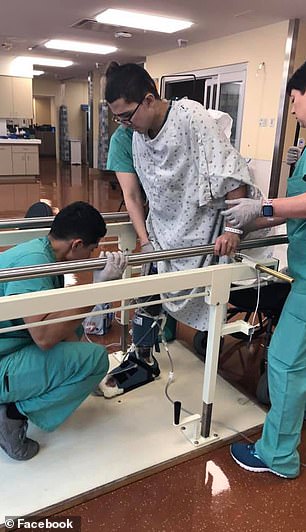 Del Barba wasn’t told about the positive results and, when his condition worsened, he was finally taken to the hospital on February 11, where he was diagnosed with necrotizing fasciitis. Pictured, left and right: Del Barba in physical therapy 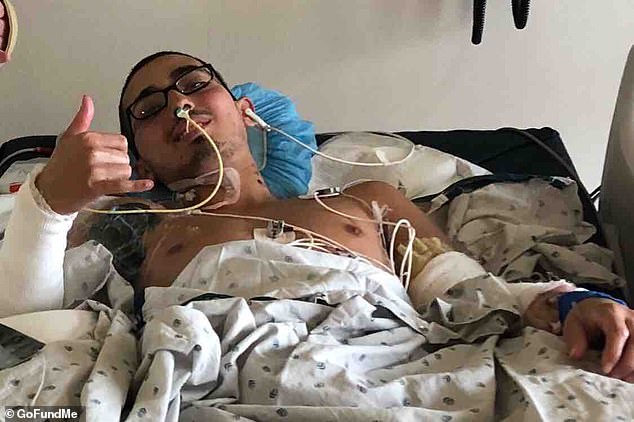 Necrotizing fasciitis is a rare bacterial infection that quickly kills surrounding tissue, and group A strep infections are believed to be the most common cause. Pictured: Del Barba in the hospital

On February 10, Del Barba was taken to the hospital after he complained of more leg pain and throat pain. But he was released the same day and given more ibuprofen and throat lozenges.

‘Nobody looked at the lab results nor notified him of his positive culture results,’ Mark told WRBL. ‘All they had to do was give him a shot of penicillin.’

When Del Barba’s condition worsened the next day, he was taken to Piedmont Columbus Regional, a medical center in Columbus, Georgia, where he was diagnosed with necrotizing fasciitis.

According to the Centers for Disease Control and Prevention (CDC), public health experts believe group A Streptococcus are the most common cause of the infection.

It usually enters the body through the tiniest cut or scrape in the skin. The CDC says between 700 and 1,200 cases occur in the US each year.

Early symptoms include a red or swollen area of the skin and severe pain. Later symptoms can include dizziness, nausea, blisters and change in skin color.

The health agency says that a prompt diagnosis and rapid treatment is key to stopping the infection in its tracks.

This includes antibiotics or surgery when medication is unable to reach the tissue that has already been infected.

The CDC says about 25 to 30 percent of necrotizing fasciitis cases every year result in death. 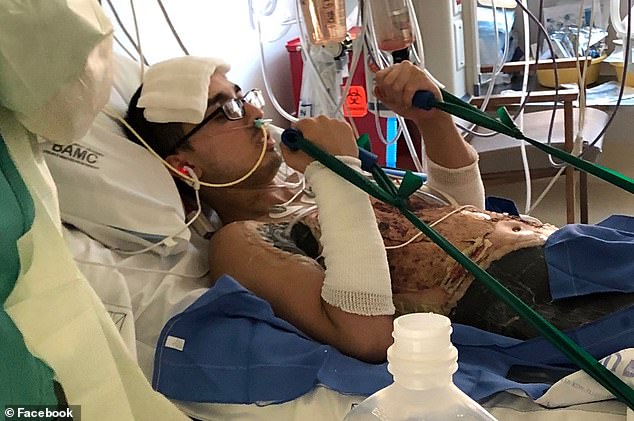 Since then, Del Barba has undergone 14 surgeries, including one to amputate his left leg, and doctors are now working to save his right leg. Pictured; Del Barba in the hospital 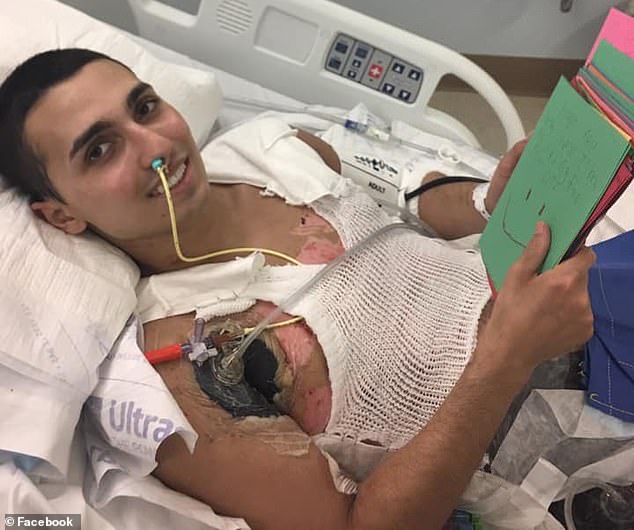 He is now being treated at Brooke Army Medical Center in San Antonio, Texas, where he will undergo skin grafts, reconstruction surgery, physical therapy and wound care. Pictured: Del Barba in the hospital 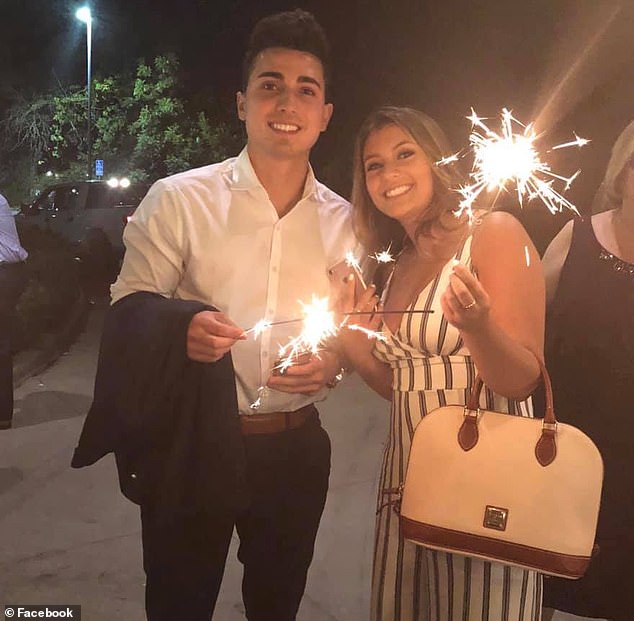 On February 21, Fort Benning said in a statement that four basic trainees had developed strep infections. Pictured: Del Barba, right, before the incident

Del Barba’s first surgery at Piedmont removed muscles and tissues from his left leg in an attempt to save it. He had another surgery the following day and his parents were told he was in grave condition.

On February 13, two days after arriving at Piedmont, he was airlifted to University of Alabama-Birmingham Hospital Burn Center. The next day, Del Barba’s left leg was  amputated right above his knee.

Between the three hospitals, Del Barba has undergone 14 surgeries and tissue has been removed from throughout the body to curb the disease’s spread.

There was fear at one point that Del Barba’s right leg would also be amputated, but it seem that surgeons were able to save it.

Mark says a series of errors during his son’s care at Fort Benning nearly cost him his life and that’s he grateful for the doctors that have since treated his son.

‘We are so grateful for the excellent care my son received from Piedmont ICU,’ he told WBRL. ‘The medical team saved my son’s life. And the continued care he received from UAB was absolutely amazing. The care now at BAMC is nothing but superb.’

His parents have started a GoFundMe page for donations to various charities including Wounded Warrior Project and Fisher House.

However, post spokesman Ben Garrett said the cases should be considered a cluster and not an epidemic.