Several mothers whose children died of the flu have been trolled relentlessly by anti-vaxxers.

Serese Marotta did her due diligence in 2009, as she did every year. She and her husband got their flu shots and vaccinated their two young children too.

But that was the hear of the horrific H1N1 flu pandemic, and the shot the family got didn’t contain that strain.

In October, her son, Jospeh died of the flu at just six months.

Determined to not let his death be in vain, Serese became involved in Families Fighting Flu, a nonprofit dedicated to raising awareness and promoting life-saving vaccination against the flu.

She hoped that sharing her story in a Facebook Live video, she could help to keep other families from going through the devastation that her son’s death had brought her family.

Instead, the post was inundated with appallingly hateful comments from people who were anti-vaccine or vaccine hesitant. 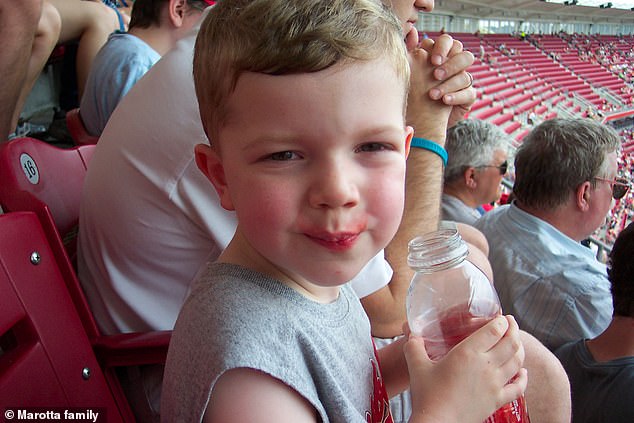 Joseph Marotta died at age five of the flu, in spite of getting a flu shot. His mother, Serese has become a flu shot advocate nevertheless, but her story has been met with hateful comments from anti-vaccine trolls on Facebook

It was shocking then, but Serese soon discovered this was a common – but never painless – experience for families like hers.

Not all, but many of those deaths were preventable.

The 2017-2018 flu shot was an imperfect match for the season’s dominant, aggressive strain, but it was still estimated to be about 38 percent effective – and seemed to work better for kids.

Public health officials and doctors are united and certain that the flu shot is safe, effective and the best shot we have at protecting ourselves and our children against the potentially life-threatening virus.

Even Serese, who lost her little boy in spite of vaccinating him is unwavering. But prior to his death, she had no idea that Americans – and many around the world – are divided on this issue.

‘Before his death, I was just going along and doing what I thought was appropriate to protect myself and my family,’ she says.

‘I was an environmental scientist, taking my children to pediatricians for well-visits, so if my pediatrician said it’s time to do this vaccination, I did it. I know the science, I know that vaccines save lives.’

But as of last year, 29 percent of people in the US did not consider getting their children vaccinated ‘very important,’ according to a Research America survey.

It has always been of the utmost importance to Serese, and still is.

She understands that Joseph’s case is ‘complicated’ because the H1N1 pandemic caught the world off guard, including scientists. 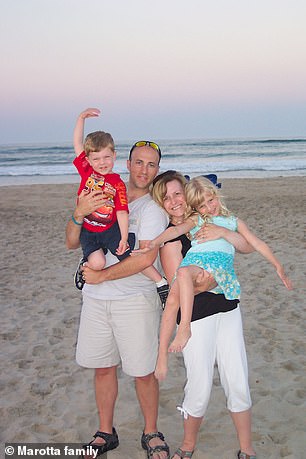 Before Joseph’s death in 2009, the Marotta family was happy, healthy and enjoyed traveling, but always with the proper vaccinations

The Marotta family lives in New York now, but in 2009 they lived in Ohio. The H1N1-protective vaccine that was made emergency as the virus swept the nation and claimed lives hadn’t reached their community when she took her kids for the shot.

Two weeks after Joseph’s death, the vaccine that might have protected him from the flu arrived in their Ohio town. Serese took her daughter to get the shot.

Six months after he died, Serese was ready to do something. She reached out to Families Fighting Flu, and started speaking about the flu shot and Joseph’s death.

In 2010, she decided to mark Joseph’s death with a Facebook Live video for his ‘angelversary’ –  her name for the day he died, October 18.

‘It was a very personal day for me, and I was sharing how important it is to be vaccinated,’ Serese says.

‘But the response was an attack on me. It was shocking.’

Serese soon learned that she was hardly the only one being targeted.

‘Many of the families that are part of this organization and others have, at various times over the years, been confronted with people who oppose vaccines, and a lot of what we’ve directly expreinced has come over social media channels,’ she says.

Jill Promoli, a mother and photographer from the Toronto area in Ontario, Canada was one of them.

Jill’s son, Jude, died when he was just two.

When his autopsy came back, confirming that it had been influenza B that killed the little boy, Jill became an advocate, rallying for vaccination to save other children, CNN reported.

But her open, honest social media posts about her son, her grief and the importance of getting the flu shot was flooded with appalling comments, saying Jude deserved to die and even denying his existence.

But he very much did exist, and Jill and her family ache for the little boy they lost every day.

Jude should have turned four in January.

Instead, while celebrating his twin brother, Thomas’s birthday, Jill had to choke back tears for the other little boy that would have been smiling, blowing out candles, and probably wearing his favorite Superman pajamas.

Almost a year ago, Jill put her two little boys down for a nap in their home in Mississauga, Ontario.

But only one of them woke up.

Jude had had a mild fever, but it didn’t seem like anything more than a bug, yet when Jill went to get the boys up, she found him dead.

She had no idea that he’d had the flu, and it seemed impossible, since Jude had had his flu shot. 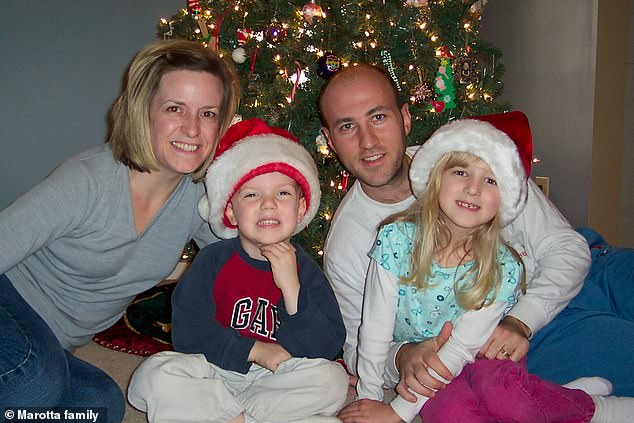 Serese, Joseph, Joe and Emma (left to right) Marotta all got a flu shot every year. The family is only more adamant about doing so since Joseph’s death in 2009

After drifting through the surreal motions of planning and having a funeral for her son, Jill wasted no time in becoming an advocate.

She founded For Jude, For Everyone, a nonprofit dedicated to raising awareness and encouraging anyone and everyone to get flu shots.

Whenever she posted Jude’s story and urged the public to get their shots, she would be bombarded with comments, messages and emails of the most heinous nature.

They said her story was a cover-up for the fact that she had murdered her own son, that she wanted other families to vaccinate their kids so that they, too, would die from the shot, and be in as much pain as Jill was.

‘The first time it made me feel really sick because I couldn’t fathom how anybody could even come up with such a terrible claim,’ Jill told CNN.

‘It caught me off guard in its cruelty. What kind of a person does this?’

Trolls cursed her and cursed her, calling Jill the worst names. But she refuses to give up, saying she’s ‘had to grow some very thick skin.’

Serese says that sometimes that attacks are on her character and ideas, other times commenters simply seem to be questioning the vaccine.

‘It runs the gamut, some people are not malicuious,’ she says.

The ones that are malicious though, are missing the message and misreading the tone that Serese says she and organizations like Families Fighting Flu are trying to strike.

‘I just want to be respectful and share my story. I’m not sharing this to try to scare you,’ she wishes she could tell anti-vaxxers and vaccine hesitant commenters.

‘I want my story to be your lesson.

‘We have nothing to win. Our children are no longer here and we cannot change that. But, hopefully, by bravely continuing to do what we can, maybe we can convince one person to go get vaccinated and therefore save a life.’