He may have been unlucky in love during his stint in last year’s Love Island.

But Dr. Alex George has now hit the jackpot, with his new girlfriend Amelia Bath surprising him with a party to celebrate his 28th birthday on Friday.

Sharing a picture on Instagram of himself giving Amelia a huge hug in front of blue balloons spelling out ‘Happy Birthday’, a loved-up Alex wrote: ‘Had such a good birthday yesterday. Thanks to Amelia for my surprises and especially for my 7 minute video of birthday wishes from friends and family. Have a great weekend everyone.’ 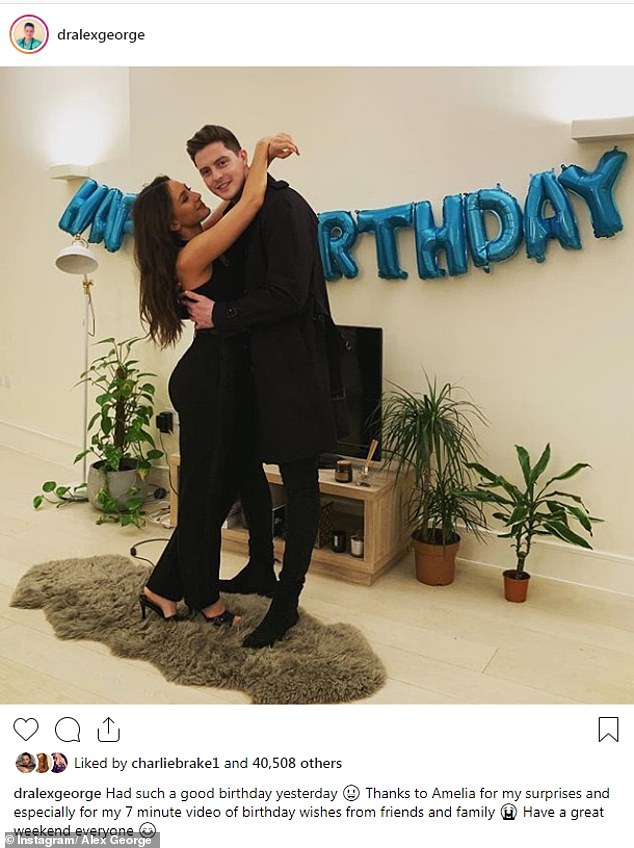 Birthday love: Dr Alex George, 28, shared a sweet snap on Instagram of himself with girlfriend Amelia Bath, 24, after she surprised him with a party to celebrate his 28th birthday on Friday

Alex looked suave in a black trench coat, black jumper and black skinny jeans as he leaned in close to his other half.

Meanwhile, Amelia oozed glamour in a halterneck jumpsuit and black heels as she wrapped her arms around her boyfriend while looking adoringly at him.

The medic also took to Instagram stories to share clips of his surprise bash, with the delighted doctor gushing to the camera: ‘Just come home and it’s my birthday…look!’

The star then panned around to his kitchen where a group of his friends were dancing around, ready to mark his big day. 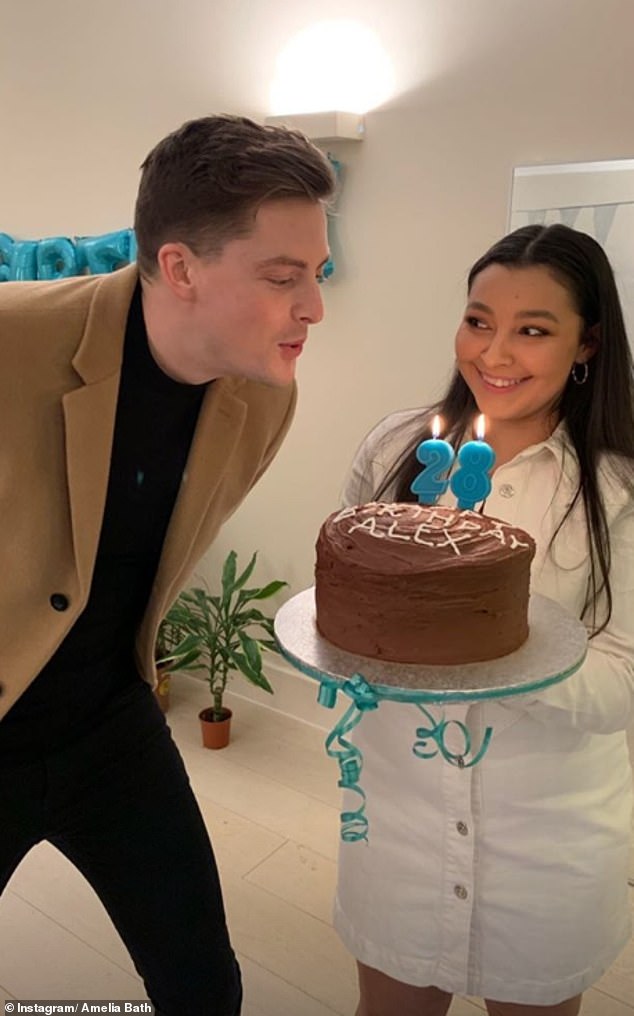 Make a wish: Alex blew out his candles on his cake as he celebrated turning 28 with his friends and new girlfriend Amelia 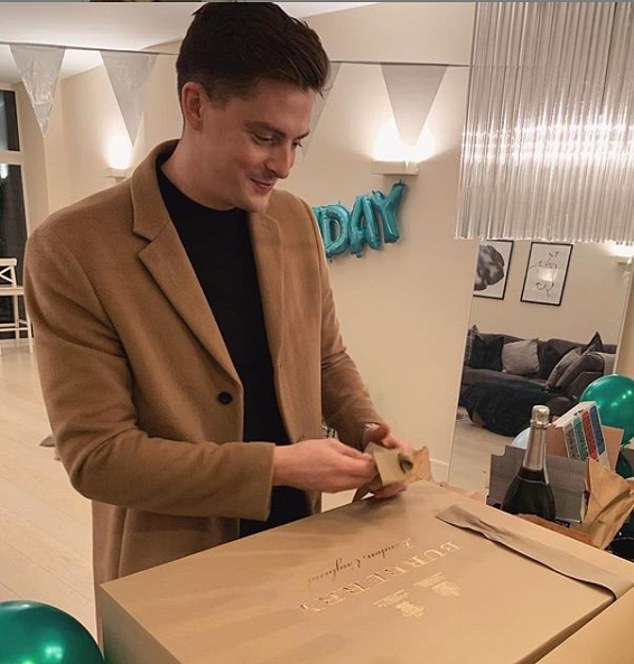 Unwrapped: The delighted medic opened up his special gift from his girlfriend after he arrived home to a sweet surprise party

Amelia and Alex’s pals were clearly keen to make it a memorable night for him, with piles of presents, a chocolate cake and a bottle of prosecco on hand to help them celebrate.

Meanwhile dancer Amelia, who also starred on Ibiza Weekender in 2016, took to her own Instagram to keep her followers up-to-date about the big night.

She shared a snap of Alex opening up his present, and also gave fans a glimpse of where the couple first met, at No.32 The Old Town Bar and Restaurant in Clapham. 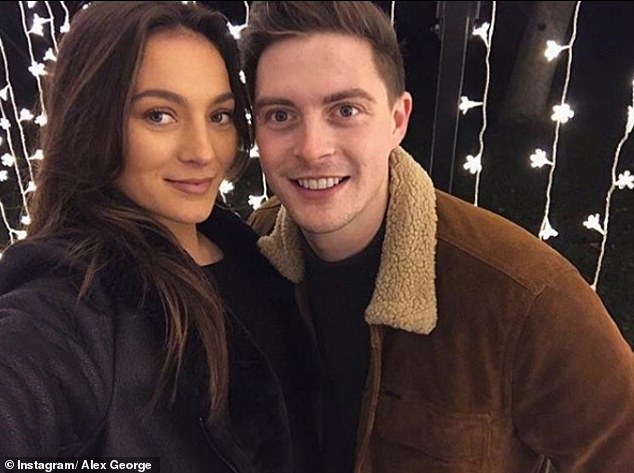 Coupled up: Alex and Amelia first went ublic with their relationship on New Year’s Day this year, after he previously dropped a hint about a new girlfriend during Love Island’s Christmas reunion show

Alex and Amelia first went public with their relationship on New Year’s Day this year,  after he previously dropped a hint about a new girlfriend during Love Island’s Christmas reunion show.

The NHS doctor shared an adorable snap of the pair on Instagram, with his caption fittingly saying: ‘The person I would like to couple up with is…’

Since then, the duo have shared a series of loved-up snaps, with their blossoming relationship going from strength-to-strength.

Their adorable romance comes following unlucky-in-love Alex’s disastrous stint in the villa, where his attempts at finding love went rather pear-shaped.

The star was paired up with numerous ladies in the villa including Samira Mighty, Alexandra Crane and Grace Wardle, but inevitably left as a single man.

He was previously linked to Olympic snowboarder Aimee Fuller earlier this year after they shared snaps of each other on social  media. 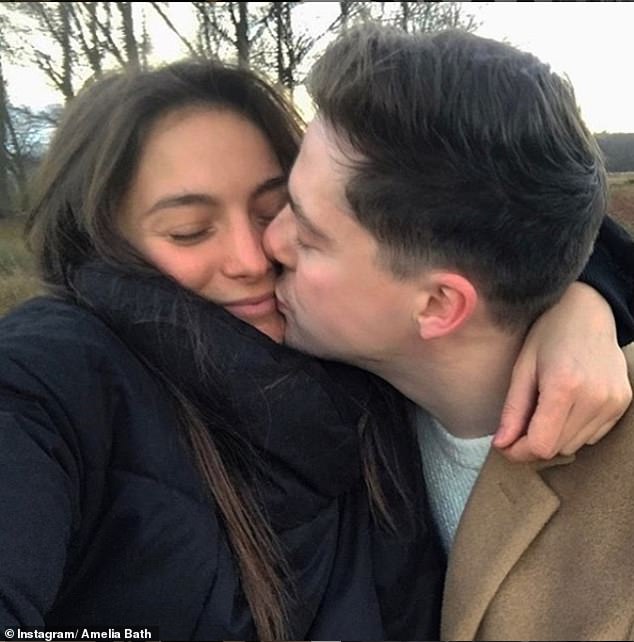 Kiss kiss: Since going public, the duo have shared a series of loved-up snaps, with their blossoming relationship going from strength-to-strength