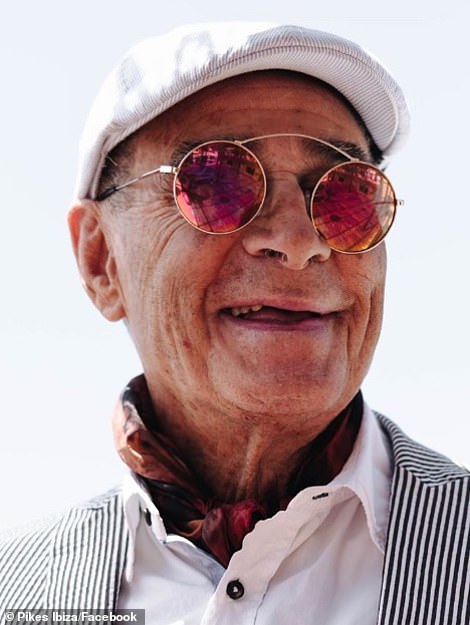 The legendary A-list celebrity hotel boss Tony Pike – dubbed the Hugh Hefner of Ibiza – has died at the age of 84 following a battle with cancer.

The five-times married hotelier shot to fame in the 1980s after launching Pikes Hotel on the party Spanish isle, with his celebrity pals including everyone from the late Freddie Mercury to Kate Moss.

News of his passing was announced via the Pikes Hotel’s Facebook page late last night, with a caption accompanying a photo of him simply reading: ‘Anthony John Pike (Tony). 1934-2019. RIP. Your legend will never die x.’

In July 2018, Pike launched a GoFundMe campaign to raise money for cancer treatment.

He wrote: ‘I am 84 years old, and I have prostate cancer and skin cancer. People think I am a multimillionaire because the hotel is sold. The opposite is true.’

He went on to explain that he needed ‘dendritic cells therapy ASAP,’ a relatively new form of alternative cancer treatment.

British-born Australian Tony originally landed on Ibiza while backpacking. He fell in love with an English girl he met there and they settled down on the island.

He opened the San Antonio hotel, which is housed with a 15th-century stone mansion, in 1978.

After the place was finished, a music industry type visited it while scouting for a video location. He loved Mr Pike’s hotel and decided to film the whole thing there.

His band was an up-and-coming British duo called Wham! and the video was for their hit 1983 single Club Tropicana.

The hotel went on to host a string of wild parties including Freddie Mercury’s notorious 41st birthday in 1987.

It was described at the time as one of the craziest the island has ever seen, with dwarves walking around with trays of cocaine and 350 bottles of Moet and Chandon champagne quaffed by guests.

Speaking of the bash a few years ago, Mr Pike said: ‘Money was no object. Freddie sought sanctuary in the hotel and wanted a party to remember. 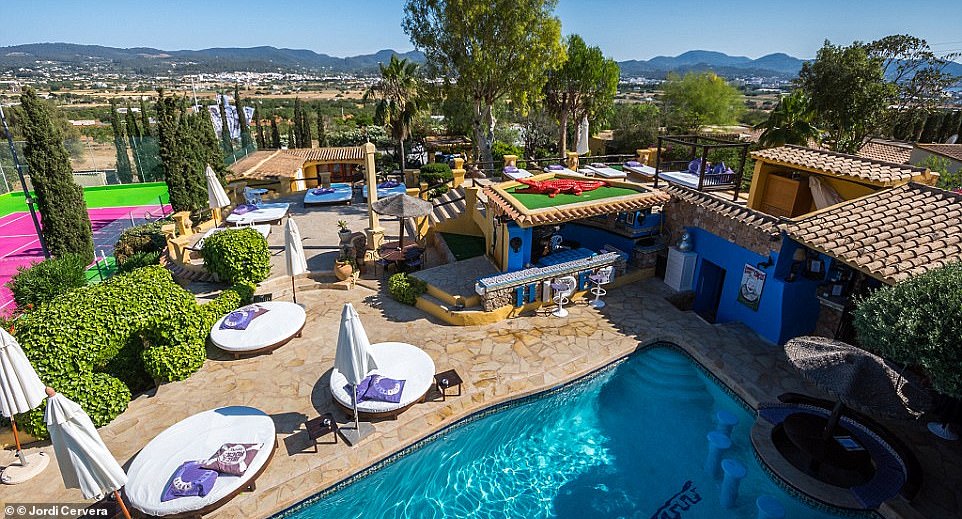 The ramshackle old finca, which dates back to the 15th century, founded by legendary party boy and former hat maker Tony Pike in the hills behind San Antonio has played host to every star imaginable. Freddie Mercury loved it so much he ended up living there 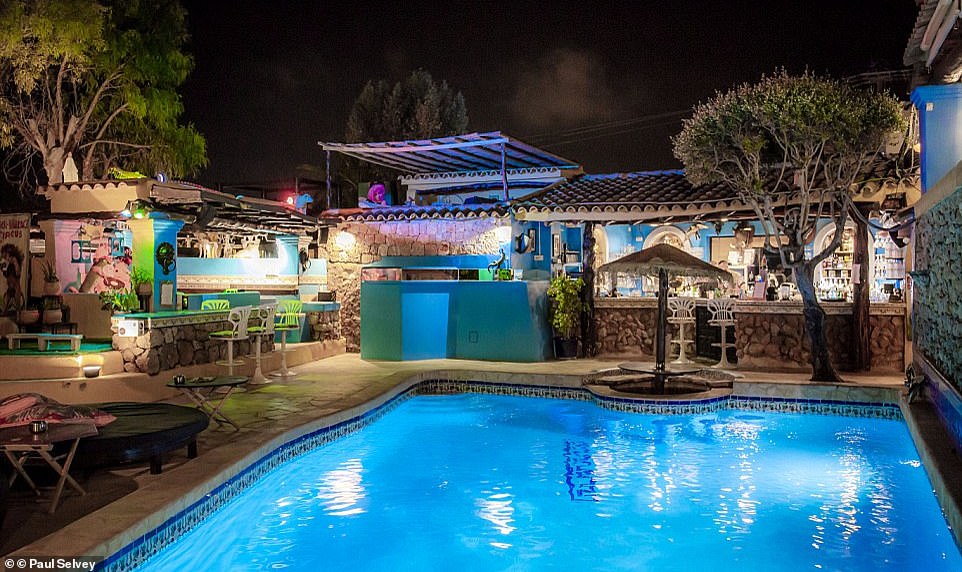 ‘When I asked him about the budget he just laughed and said there was none. We could freeze the swimming pool and have skating elephants if we wanted. He just wanted it to be wild.’

Mercury loved the hotel so much that he lived there for a few years and, after the star died, Mr Pike kept his large bedroom suite intact.

Other Pikes Hotel guests have included Grace Jones – who Tony went on to have a fling with – and Julio Iglesias.

Kylie Minogue, Naomi Campbell, Kate Moss are also believed to have considered Tony as a friend.

In 2008, Tony sold his beloved hotel to Andy McKay and Dawn Hindle, the partnership behind the Ibiza Rocks, Ibiza Rocks Hotel and Mallorca Rocks brands.

After purchasing the property, they gave it a full renovation, but made sure it didn’t affect the character of the place. They even turned Mercury’s suite into an in-house nightclub called ‘Freddie’s’. 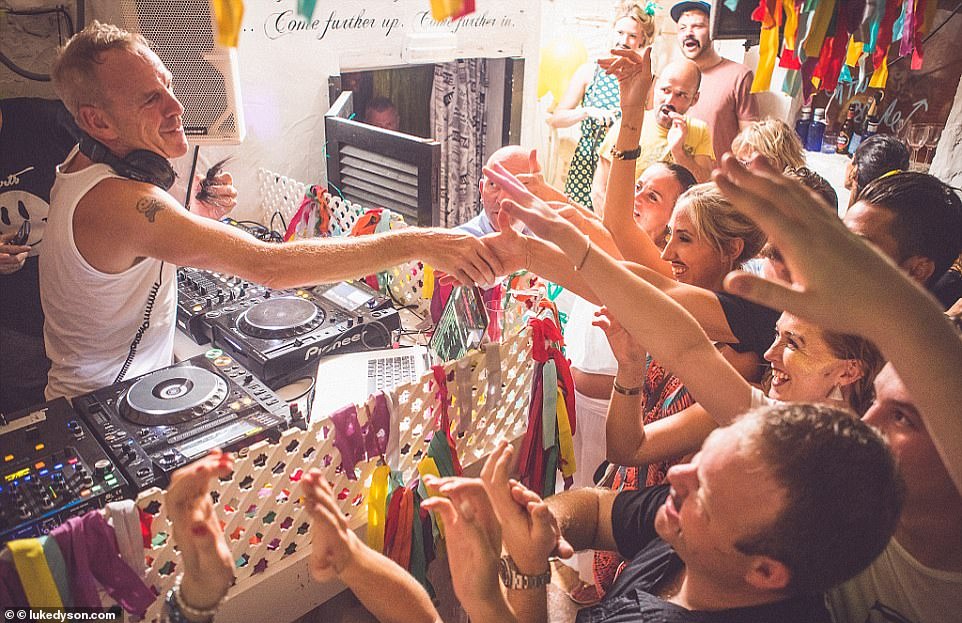 Big-name DJs love Pikes Hotel so much that they happily sign on for a whole summer at the tiny club. Pictured is Fatboy Slim wowing revellers at the hotel

Everything inside the suite has been kept the same – with a space cleared for the dance floor and a DJ booth installed.

News of Tony’s passing quickly garnered thousands of responses on Facebook, with hundreds of fans expressing their condolences.

Jade Power wrote:  ‘I imagine you’ll be partying up there with all the other legends you made friends with over the years. RIP Tony, thank you for the memories.’

While Danny Rampling added: ‘Very sad news to wake up to bless Tony Mr Ibiza, will miss his stories and laughs we had together over many years RIP.’

Recounting the moment he first clapped eyes on his infamous hotel he mused: ‘I spotted a 500-year-old finca near San Antonio for sale in a tiny real estate office. Price on application.

‘The property was set in a couple of acres and for sale at six million pesetas (around £40,000 back then).

‘We drove up to see it and found an abandoned house, with an original olive mill and flour mill, but no water or electricity. I had a feeling about it, though. I felt the house had an irresistible charm to it, but I wanted to improve the look of it. I could see the potential…’