Jameela Jamil has called for a Photoshop ban on all makeup, hair and skincare ads while speaking about her own struggles with eating disorders and body dysmorphia.

The Good Place actress, 33, spoke candidly about this topic with Vogue magazine where she reflected on the influence celebrities have on other people’s perceptions.

‘We have so much privilege as celebrities, it’s ridiculous just to take and never give back,’ she told the publication. 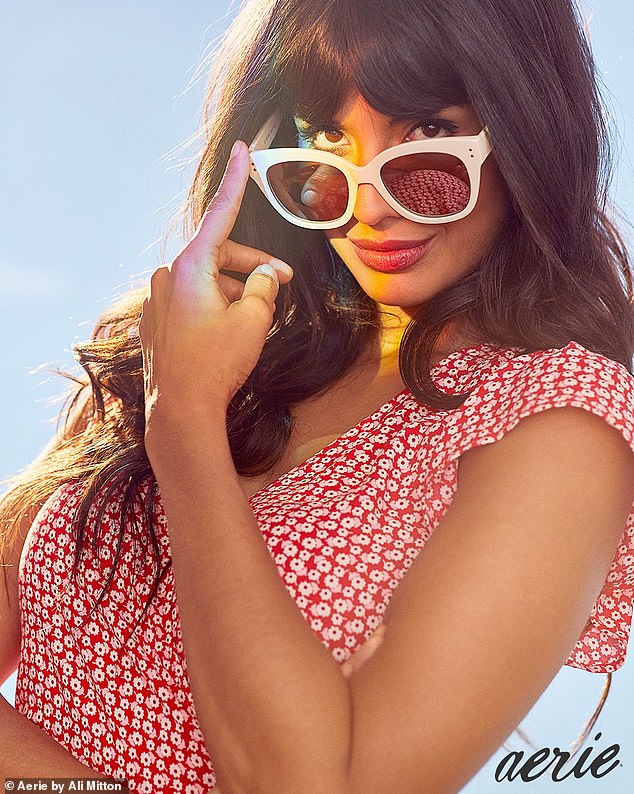 Candid: The Good Place actress Jameela, 33, spoke to Vogue magazine about why there should be a ban on makeup, hair, and skincare ads using retouched images 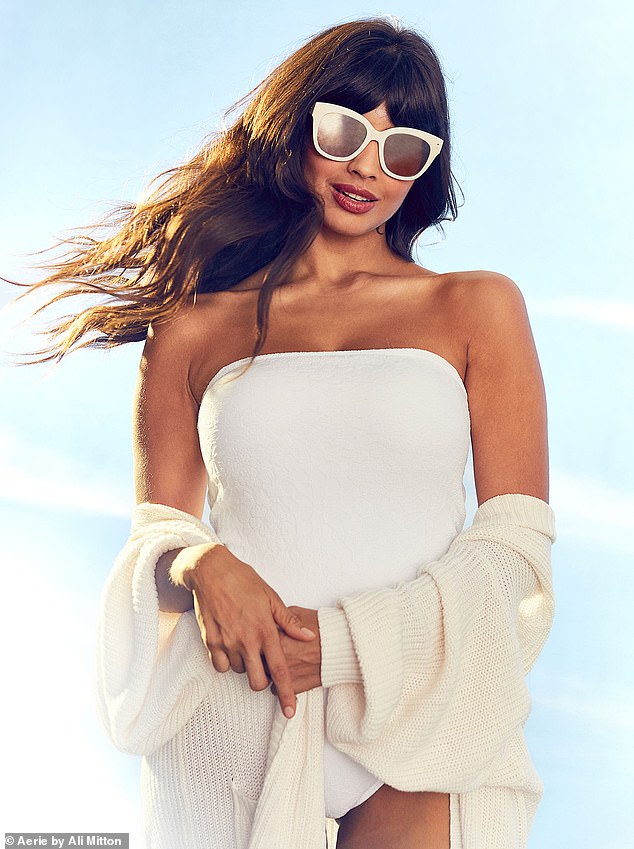 Positive: ‘[Photoshop] shouldn’t be allowed in makeup, anti-aging, or hair adverts,’ she said. Pictured is the actress in an unretouched Aerie campaign

Jameela continued: ‘People hang off of every word of the biggest influencers; those people could shed light on so many important issues rather than just continue to perpetuate narratives that are harmful.’

The interview went on where Jameela expressed how companies should avoid retouching the pictures for makeup, hair and skincare ads — particularly ones targeted at women.

‘[Photoshop] shouldn’t be allowed in makeup, anti-aging, or hair adverts,’ she said. 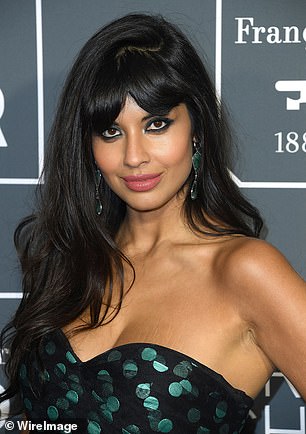 Moving forward: Jameela, pictured in January, also opened up about how she struggled with body dysmorphia

Recently, the star was announced as one of the newest spokespeople for Aerie and was pictured in an unedited campaign for the lingerie brand.

In the campaign, Jameela proudly showed off her body in a pink dress and sunglasses as she praised the brand on her Instagram page for promoting a message she could proudly stand behind.

‘@Aerie is the first company I have seen dedicate so much energy to inclusion and representation on their website and in their stores, and that is something I myself am constantly fighting for,’ Jameela wrote in an Instagram post at the time.

Jameela is known for being quite outspoken about fat-shaming and the unhealthy and unrealistic beauty standards that society imposes on women, making her a natural fit for teaming up with Aerie — a brand that has been a commitment to promote healthy body image.

When speaking with Vogue, Jameela also opened up about what has encouraged her to remain outspoken about body image and the role celebrities should play in promoting acceptance.

‘I was someone who suffered badly from eating disorders and body dysmorphia as a teenager and as someone who was personally affected by what was a tenth of the assault that young women are under now, [that] gives me such a responsibility,’ she said. 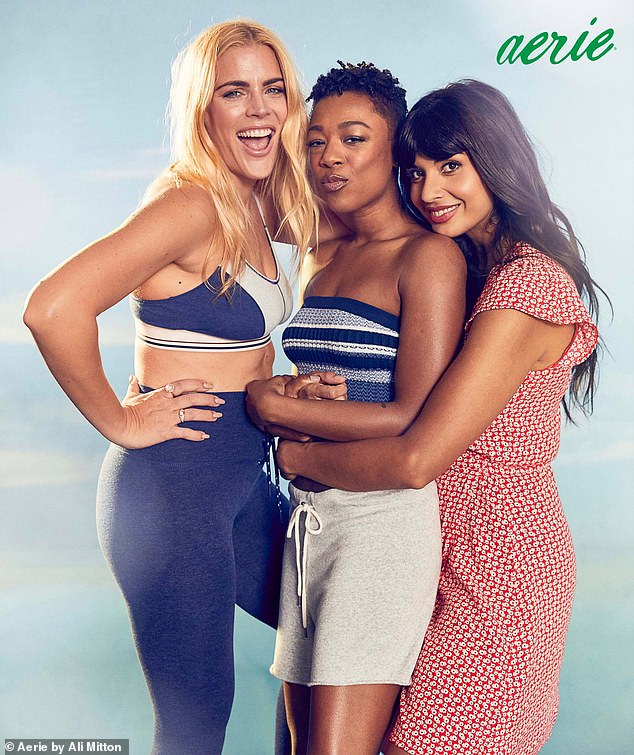 Love: Jameela, pictured with Busy Phillips and Samira Wiley, was announced as one of Aerie’s new spokespeople for its body positive campaign earlier this year 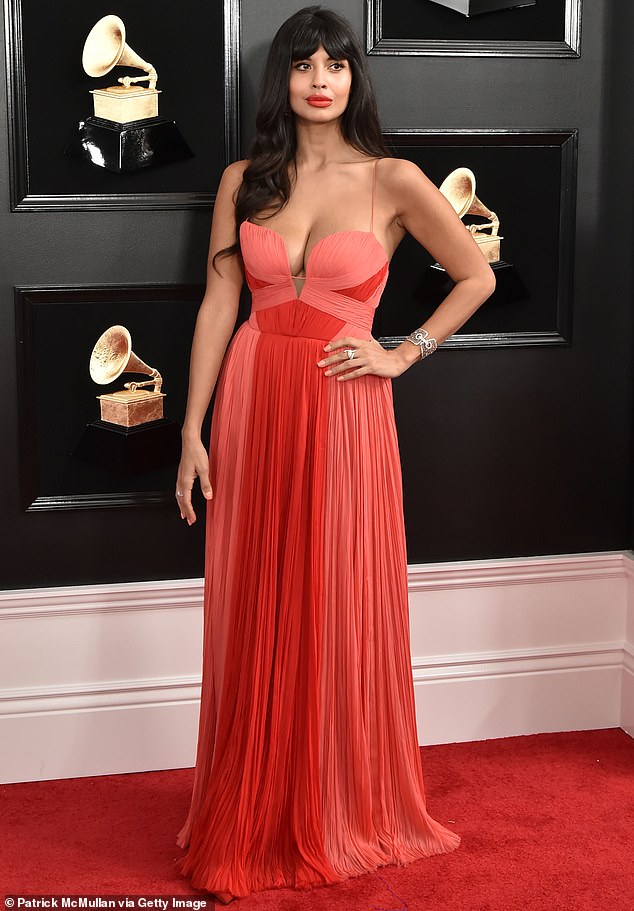 Outspoken: Jameela, pictured at the Grammys earlier this month, has often spoken against celebrities and products that encouraged women to lose weight or alter their appearance

The actress has previously used her platform on social media to criticize products such as detox tea and weight-loss lollipops, taking aim at big-name celebrities like Cardi B and Khloe Kardashian for promoting the products to their fans and followers.

In November, she responded to a paid-for Instagram post that Khloe had posted in which she promoted a weight-loss beverage, writing: ‘Some thoughts I have about @flattummyco being flogged this morning to prey on the RIDICULOUS shame women are made to feel when they indulge on days like Thanksgiving.

‘I hate this company and it’s poisonous rhetoric that is only marketed at young girls and their branding is all pink. They are just the worst.’

At the beginning of last year, Jameela also started a project on Instagram entitled iWeigh where she challenged her followers to share positive aspects of themselves that make up their ‘weight’.

This was first thought up by Jameela after she saw a picture of the Kardashians with their weight written beneath each woman. Infuriated, Jameela decided to take action.

‘I’ve never seen a picture of a famous man with his weight written across his body, but I constantly see it with women even those who have earned hundreds of millions of dollars,’ Jameela said.

‘They’re self-made, talented, and great businesswomen, but they’re reduced to nothing more than a number on a scale.

‘I wasn’t trying to start a movement, but so many thousands of people sent posts back to me that I didn’t want to just disappear into the ether.’

The Instagram account @i_weigh now has more than 385,000 followers, some of whom have sent in pictures to Jameela to show what makes up their weight. Jameela now hopes to expand the project in the future.