By Kristy Johnson and Benge Nsenduluka For Daily Mail Australia

And not wasting any time, Iggy Azalea has already teased her next track, Started.

In an Instagram photo on Friday, the 28-year-old drew attention to her very tiny waist and shapely hips in a ‘Daddy’ crop top and matching lilac leggings. 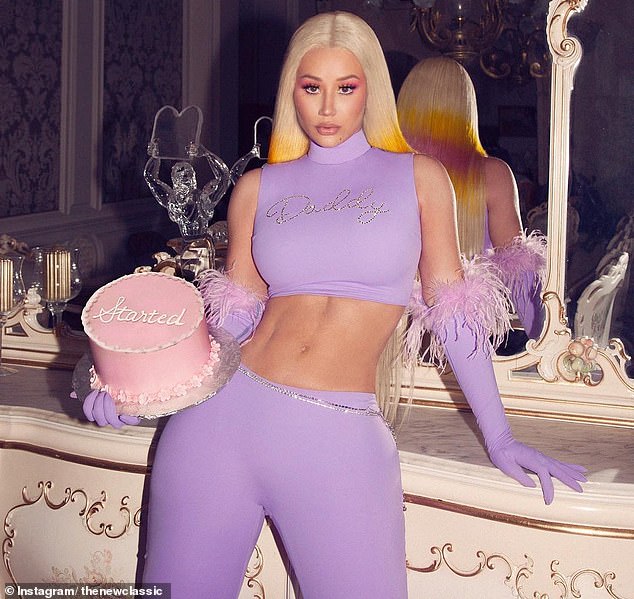 Curves ahead! Iggy Azalea, 28, showed off her famously tiny waist and shapely hips in the cover art for her next single ‘Started’

Iggy rested her famous figure against an antique dresser, and held onto a pink iced cake with the song’s title ‘Started’.

A thin diamonte belt once again accentuated her hourglass curves, while feather-lined gloves added a touch of glam.

The Fancy singer’s blonde extensions, changing in colour from the shoulders down, fell behind her toned back. 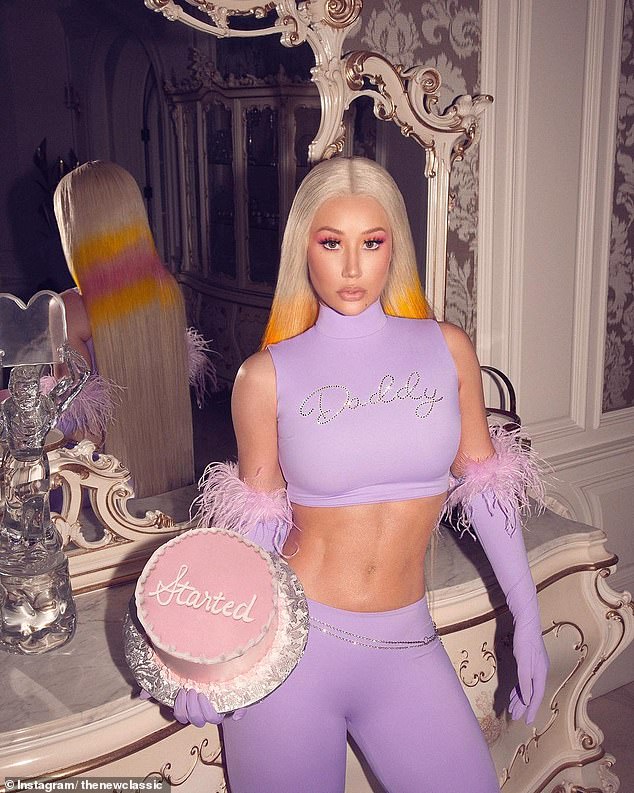 Selling records: A second shot shared to Instagram saw the Australian rapper once again showing off her hourglass figure

The Australian revealed the release date in the caption which read: ‘STARTED MAY 3’.

Iggy has persistently denied having butt implants and insists that the only plastic surgery she has had is breast implants and a nose job.

However, one leading plastic surgeon suspects that the blonde may have undergone a Brazilian butt lift.

Michael Salzhauer (aka Dr. Miami), who has not operated on Iggy, told Daily Mail Australia in February that her ‘shape’ is a dead giveaway. 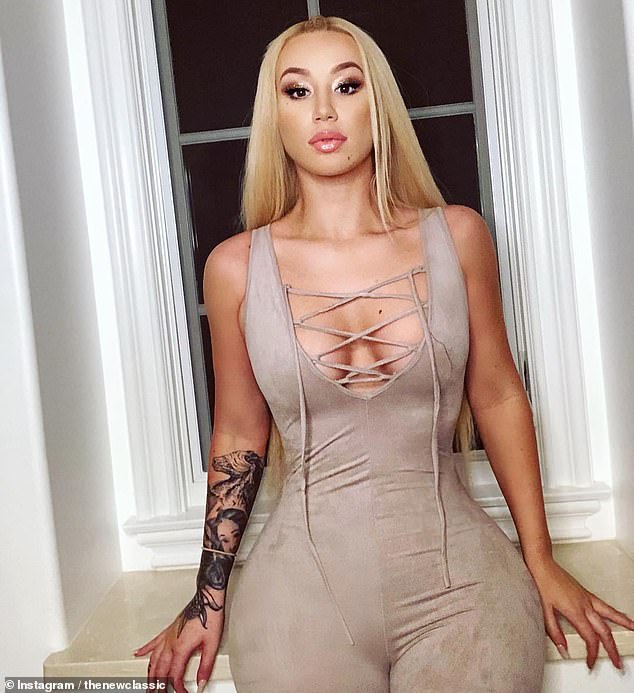 Hitting back: Iggy has persistently denied having butt implants and insists that the only plastic surgery she has had is breast implants and a nose job

‘Her shape and personal history makes me think she has,’ he said, adding that telltale signs of a Brazilian butt lift include: ‘A very small waist and big buttocks. Also, tiny scars in the lower buttocks creases, they are usually very hard to find.’

A Brazilian butt lift is a form of buttock augmentation, which enhances the size and shape of a patient’s bottom using a fat transfer from other areas of the body.

Iggy, who is often hailed by fans for her womanly curves, previously told Sway Calloway on Sway in The Morning that her bottom is completely natural. 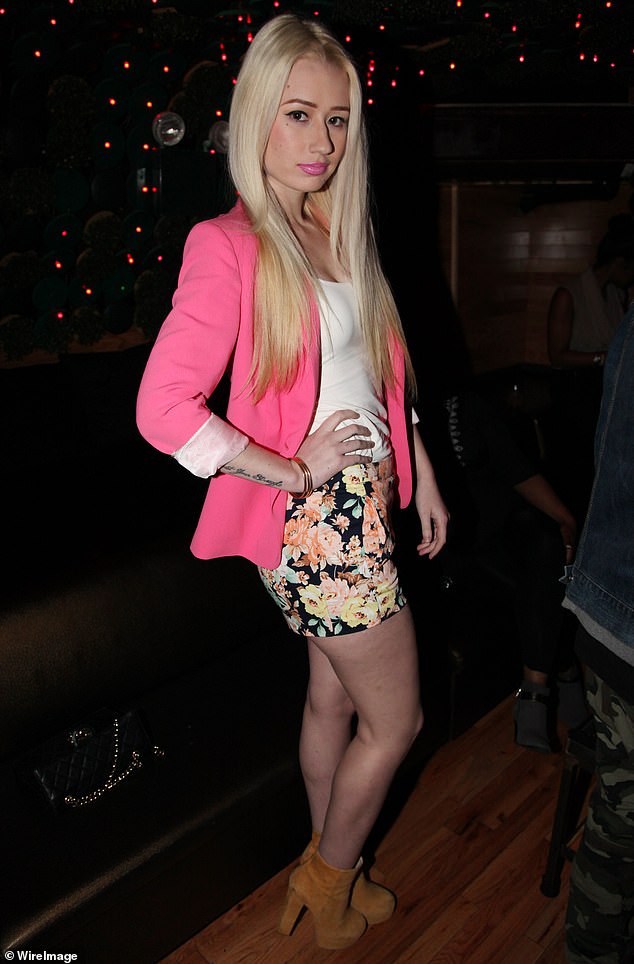 Opinion: However, plastic surgeon Michael Salzhauer, who has not operated on Iggy, told Daily Mail Australia in February that her ‘shape’ is a dead giveaway. Pictured in April 2012 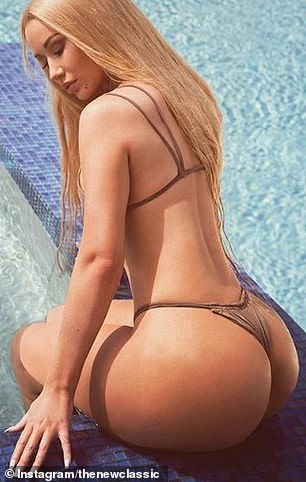 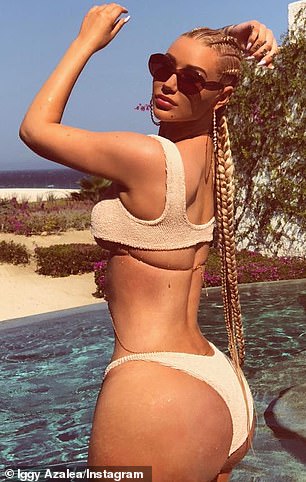 Flaunting it: In recent years, the Mo Bounce singer has had no qualms in showing off her plump derrière

‘Of course the butt is mine. I heard it’s not a real butt, I’ve heard it’s a number of things.

In 2016, Iggy defended her decision to have a nose job, telling Elle Canada: ‘I think, in 2016, people should be more accepting of the fact that both famous and non-famous women are having cosmetic procedures.’ 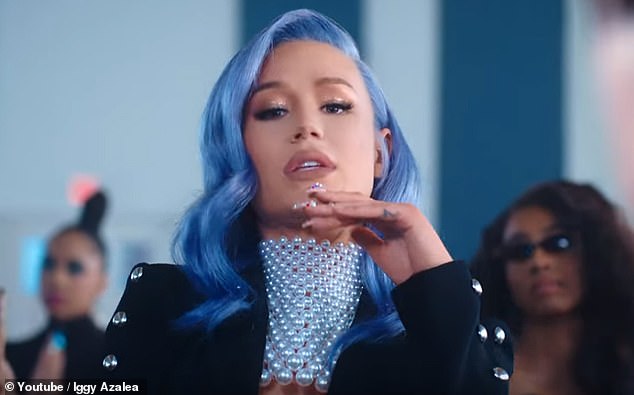 Her decision: Iggy defended her decision to have a nose job, in an interview with Elle Canada in 2016. Pictured in the video for track Sally Walker