Frank Sinatra, who was known to be partial to a few, once said: ‘Alcohol may be man’s worst enemy, but the Bible tells us to love our enemy.’ At this time of year many of us are loving the enemy more than usual. So what are the scientifically proven ways to stay sparkling this festive season?

First, if you want to avoid embarrassment at the office party, have a glass of milk or handful of nuts before you go out.

When you chug down a glass of alcohol it swiftly passes into your stomach. If it’s empty then the alcohol will irritate your stomach lining, making blood vessels swell, increasing the speed and amount of alcohol that is absorbed into your blood. This is why you get drunk faster if you haven’t eaten. 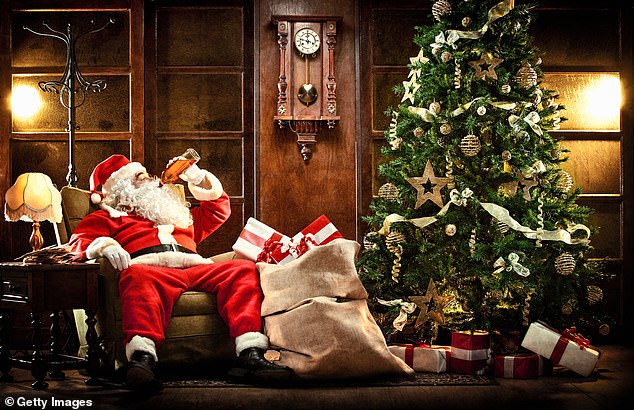 First, if you want to avoid embarrassment at the office party, have a glass of milk or handful of nuts before you go out (*stock image)

If you eat before you drink, particularly something fatty – instead of nuts or milk it could be cheese – this will act as a physical barrier to the booze, and instead of being absorbed in the stomach the alcohol passes through a valve called the pyloric sphincter and into your small intestine.

Going this route, it takes longer to get into your blood stream, and so to your brain.

But will mixing your drinks make you more drunk? Broadly, no. How drunk you get is mainly down to how much alcohol you drink, though fizzy drinks are the exception – champagne bubbles seem to get you drunk faster. One theory is that carbon dioxide in the bubbles somehow speeds the absorption of alcohol.

WHY SOME CAN TAKE THEIR DRINK… AND OTHERS CAN’T

Once alcohol hits your brain, it depresses your inhibitory centres. When I drink I normally have about an hour of uninhibited fun, before I slump.

Alcohol is toxic, so your liver puts aside all other work and starts breaking it down, turning it into a toxic substance called acetaldehyde. This then gets converted into vinegar (acetic acid) and eventually into carbon dioxide and water. It is the build-up of acetaldehyde that causes flushing when we drink and, later on, makes hangovers such a horrible experience.

I can’t handle much alcohol, and that seems to be genetic. I’ve been tested and I, like ten per cent of Europeans, have a dodgy version of an enzyme called acetaldehyde dehydrogenase, which speeds up the removal of acetaldehyde. That’s why when I drink more than a very modest amount I flush and feel terrible.

Considering how bad alcohol makes me feel, my wife, Clare, is astonished that I drink at all. She is not a big drinker, which is just as well, because women tend to get drunk faster – partly because they tend to be smaller, but they have less muscle and more body fat than men. Some alcohol gets absorbed by your muscles, but fat and alcohol don’t mix.

Hormones also play a part in metabolising alcohol and a woman who goes drinking just before her period will find she needs less booze to have the same effect. 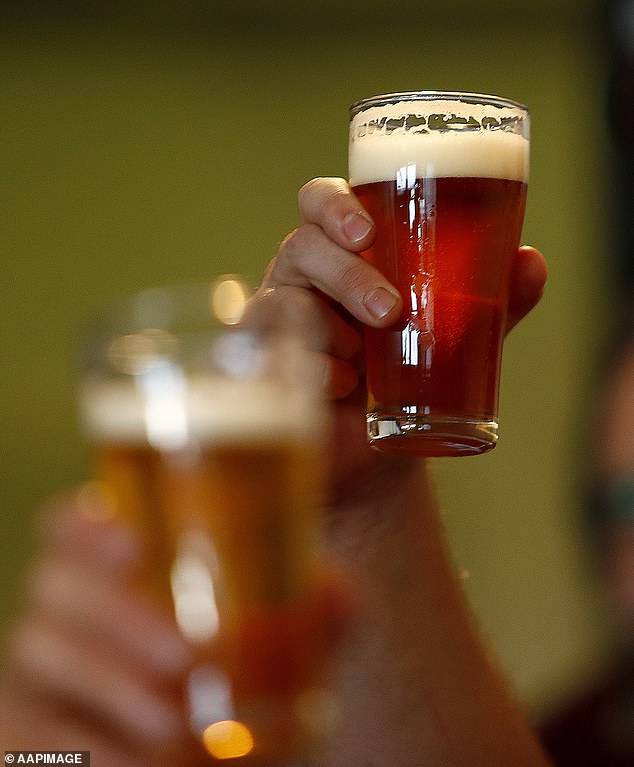 Drinking too much alcohol is a serious social problem, so is there anything you can take that will help you cut back (stock image)

TIME… THE ONLY HANGOVER CURE

Most of the herbs, potions and old wives’ tales touted around as hangover cures have little if no effect. An international group of scientists have pooled their expertise to form The Alcohol Hangover Research Group, who meet annually to discuss latest research, identify causes and look for potential treatments. So far, no remedies for the ‘general feeling of misery’ have been identified – aside from time.

If I have had too many drinks I drink a large glass of water and take a couple of paracetamol before heading for bed.

The head-splitting headache that accompanies a typical hangover is partly caused by dehydration. Next morning, soon after I stagger out of bed, I drink lots of tea, water and take another couple of paracetamol. I have an orange to try to replace a bit of Vitamin C and if I’m up to it, a greasy breakfast. Then, with a silent vow of ‘never again’, I take the dog for a walk.

CUT BACK ON BOOZE… BUT KEEP THE BUZZ

Drinking too much alcohol is a serious social problem, so is there anything you can take that will help you cut back?

A few years ago, I took part in an experiment where we decided to test out a plant extract called kudzu, which you can buy in supplement form.

The plant seems to increase blood flow to the brain, so people feel the effects of alcohol more quickly. In theory this should slow down drinking.

We recruited a group of young men and women willing to have two nights out in the name of science. Before starting we gave them pills to swallow – some got a kudzu extract, others a placebo. A couple of hours after taking the pills, we gave them free access to a bar for 90 minutes, with a choice of beer, wine or spirits.

When they swallowed a placebo they averaged seven units of alcohol a head. With the kudzu it was 5.5 units, 20 per cent less. The kudzu group also felt more tipsy.

ONE FOR THE ROAD? TIME TO THINK AGAIN

But a 2014 study found that if the driver had a blood alcohol level above this they were 13 times more likely to be involved in a fatal collision than if they were below that level. On this basis, Scotland lowered its threshold to 50mg, and Northern Ireland intends to follow – leaving England and Wales with some of the highest limits in Europe.

How much can we drink before we’re over the limit? It depends on many factors. A large glass of 14 per cent wine will probably push blood alcohol up to 50mg, and it’ll take three and a half hours for the body to process.

But age, gender, weight, how long you took to drink it, and other things might skew blood alcohol and how long before it starts to go down.

Even at 50mg, you are five times more likely to have a fatal accident – a sobering thought.

Regarding your advice last week to do three brisk ten-minute walks a day rather than focus on 10,000 steps: can I do just one 30-minute walk?

It doesn’t really matter how you decide to divide up your brisk walks, as long as they add up to roughly 30 minutes and you get your heart rate up. You can do them in five-minute chunks or in a 30-minute burst.

I want to do the 5:2 but I don’t have time to cook meals to take to work on fast days. I could cope with meal replacements, though. I see so many on the market and it’s difficult to know how to choose. Could you recommend a range?

Lots of people find meal-replacement shakes a convenient way to kick-start weight loss. I have tried a few but find that most taste synthetic and are unpleasantly sweet. I will do a bit more testing and get back to you in the New Year about this.