Victoria Komada was born with the one-in-a-million defect tibial hemimelia, which caused her to have a missing shinbone in her right leg and a shortened one in her left limb.

Eight specialists warned the three-year-old’s parents Marzena Drusewicz, 32, and Dariusz Komada, 41, her only option was a double amputation.

Refusing to give up on their daughter, the pair found a limb reconstruction specialist in Florida and fundraised £180,000 to pay for her to have two surgeries.

Medics were only able to save one of Victoria’s legs, however, a prosthetic finally enabled her to walk.

Following nine months of treatment, the family finally flew home to Norwich on Monday, with Victoria being due to start school in September. 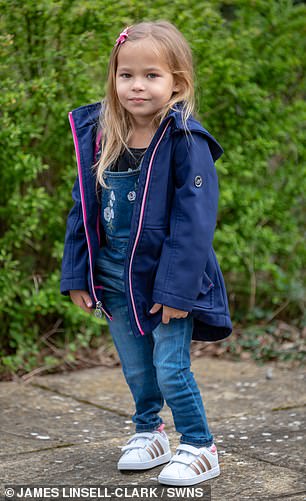 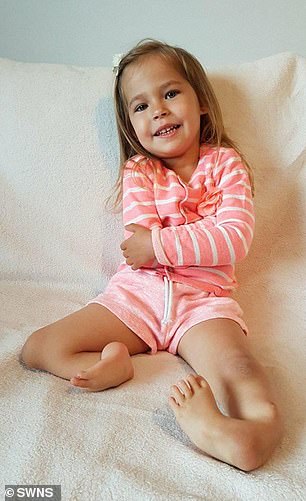 Victoria Komada can finally walk, run and play after undergoing life-changing surgery on her legs. She is pictured left after the procedure. The youngster was born with the one-in-a-million condition tibial hemimelia, which caused her legs to be ‘backwards’ (pictured right) 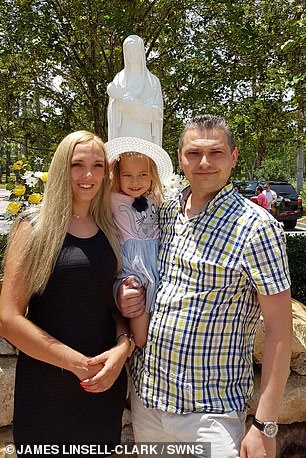 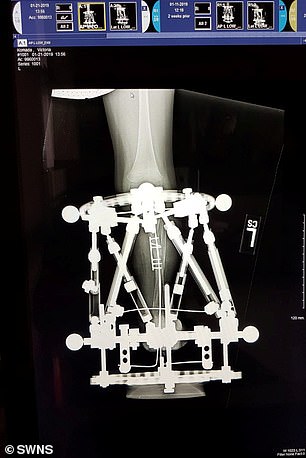 Her parents Marzena Drusewicz Komada and Dariusz Komada (pictured left together) refused to give up on their daughter despite specialists saying amputation was her only option. Victoria’s right leg had to be amputated. Pins were then put into her left limb before a fixator (pictured right) – a stabilising frame that holds broken bones in place – was attached

Dr Dror Paley – who performed Victoria’s surgery at the Paley Institute in West Palm Beach, Florida – said: ‘We achieved all we said we would achieve on her.

‘The reconstructed leg is very functional. She can walk and run and do sports now. She has a superb result.’

Although thrilled her daughter can play like any other child, Ms Drusewicz admits her treatment was grueling.

‘She was in a lot of pain all day and all night,’ she said. ‘We had all had enough. It was really horrible.

‘Of course I was so scared and didn’t know what would was going to happen. She would cry and scream so much after the operation.

‘Every week she got better and better, and now she is not in any pain at all and can walk normally and we can all start our life again now we are home.

‘We were so happy when she took her first steps we started crying. We were on the way to the car and she said “mummy, can I show you something?”‘ 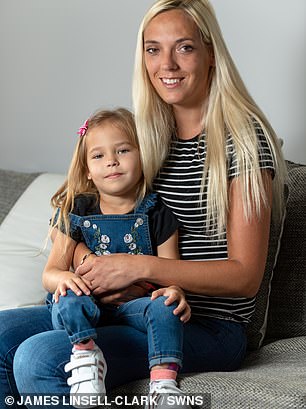 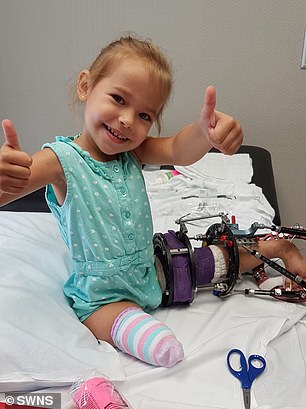 After a nine-month stint in the US where Victoria was treated, the family are home, with Mrs Komada (both left) saying they are ‘so happy’. The youngster is pictured right after having her right leg amputated, with the fixator gradually stretching her left limb into shape 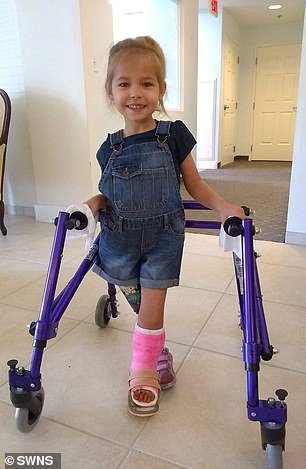 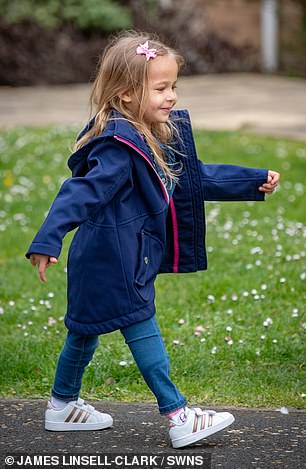 With the aid of a prosthetic and frame (seen left), Victoria slowly learned to walk. But the confident youngster can now move independently like any other toddler (seen right)

WHAT IS TIBIAL HEMIMELIA?

Tibial hemimelia covers a spectrum of deformities caused by a shortened or absent shinbone, known as the tibia.

The fibula – bone on the outside of the tibia – is usually unaffected.

The knees may also be twisted inwards.

The birth defect affects one-in-a-million births. In 30 per cent of births, both legs are deformed.

Most cases cannot be explained.

Severe incidences are often spotted during an ultrasound while the mother is pregnant.

Mild cases may become clear as the child grows.

Most patients require surgery, with the success depending on how much of the bone is missing and if the surrounding muscles are affected.

Procedures aim to length the leg by coaxing the bones back into place.

But in cases where the tibia is completely missing, amputation may be required. A prosthetic can then be fitted.

The couple, who are originally from Poland, flew to Florida in July last year to meet Dr Paley.

He told the family Victoria’s left leg could be fixed, however, her right needed amputating.

‘The reason is on the right side, where the tibia is completely missing, the quadriceps muscles mostly missing – the functional result’s not going to be great,’ Dr Paley said.

The youngster went under the knife for the first time in a nine-hour operation on July 24, which involved amputating her right leg above the knee.

Pins were then put into her left leg before a fixator – a stabilising frame that holds broken bones in place – was attached. This gradually stretched her limb into shape.

Over the following months screws were twisted into Victoria’s legs every day to move the bones into the right position.

The family stayed at the hospitality centre Quantum House throughout their nine-month stay.

Victoria then went under the knife again on November 13, which involved medics fusing the bones in her left leg to strengthen the limb.

Just two days later, she took her first steps with the aid of a prosthetic.

The couple hope their daughter will have a normal childhood like any other youngster.

The recovery process was long, with Victoria (pictured left in hospital) being forced to get used to life in the treatment centre. Although she stayed positive throughout most of the ordeal, it took its toll, with the pain leaving Victoria (pictured right with her mother) in tears

Victoria is pictured left adapting to her new limbs during physiotherapy. Right X-ray shows the youngster’s straightened leg following the grueling surgery and fitting of the fixator

Mr and Mrs Komada moved to the UK 14 years ago, and were expecting a baby shortly after.

The pregnancy went smoothly, with no signs anything was wrong until Victoria was born.

Speaking of seeing her daughter for the first time, Mrs Komada said: ‘The nurse, she came to me and she said: ‘I’m going to give you your daughter in a minute because she’s got problems with her legs.’

‘I said, ‘what problem with her legs?’ and she said ‘nothing don’t worry’.

An orthopaedic surgeon diagnosed Victoria and recommended she have both her legs amputated. But the new parents refused to let her go under the knife.

‘For me she needs her own legs, not amputate and prosthetic legs,’ Mr Komada said. ‘And I said “no I will not agree to amputate legs, no, no, no”.

Online research eventually led the couple to Dr Paley, who specialises in limb lengthening and reconstruction.

After carrying out a series of scans on Victoria’s legs, Dr Paley was confident he could help the youngster, but it would take a year before the treatment was over.