Greg Rutherford announced his retirement from athletics and decision to switch to track cycling after a problem with his left ankle resulted in the Olympic long jumper being in persistent pain.

The gold medallist, who will retire at the end of the season because of his injuries, has also won world, European and Commonwealth Games long jump titles, but has barely competed over the past 18 months.

The Milton Keynes athlete’s finest hour came on what has been dubbed ‘Super Saturday’ at the London 2012 Games, when he was one of six Britons to win gold on a day that has gone down as one of the greatest in sporting history.

However, he may pursue a third straight European crown in Berlin in August 2018, hoping to ‘finish with some roaring crowds’. But what is Greg Rutherford’s net worth? 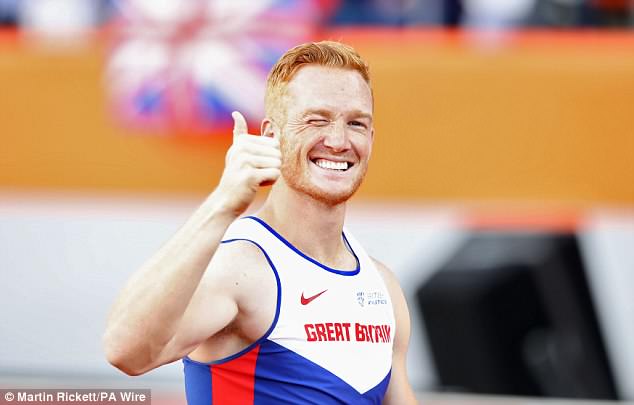 Born Gregory James Rutherford on November 17, 1986, he grew up in Bletchley, Milton Keynes and played a number of sports at a young age. After trials for Aston Villa at the age of 14, he decided to pursue a career in athletics.

Greg went on to be the youngest ever winner of the long jump at the AAA Championships in 2005 at the age of 18 and won the European Junior Championships in the same year, setting the junior record of 8.14m.

He then represented England at the 2006 Commonwealth Games and finished in 8th place before winning the AAA Championships again and won silver at the European Athletics Championships. After reaching the Olympic qualifying distance he went on to set records.

In 2012, Rutherford became the second Briton to win the gold medal for the long jump after Lynn Davies. He was then featured on a Royal Mail postage stamp and two post boxes in Milton Keynes were painted gold.

He also received a Member of the British Empire (MBE) medal from The Queen during Investiture ceremony at Buckingham Palace in London in 2013.

Two years later, he trialled for bobsleigh and skeleton with the aim of competing in the 2018 Winter Olympics before winning at the Commonwealth Games and European Championships that same year. In 2016, he won bronze at the Olympics. 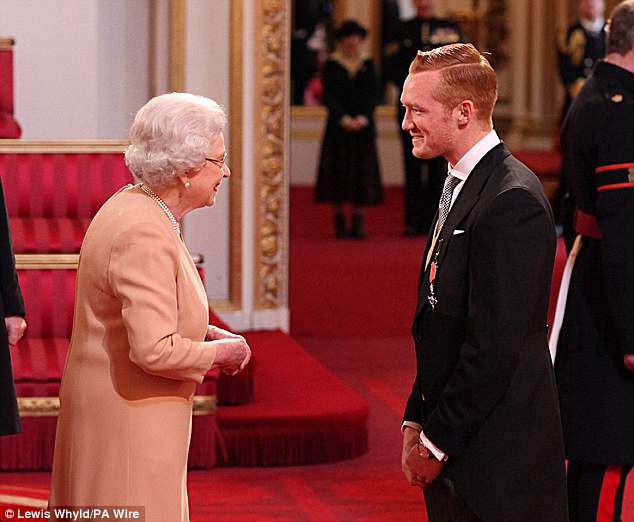 He is the country’s record holder in the sport with 8.51 metres after jumping this distance at the Olympic Training Centre in San Diego, California.

On Super Saturday at the London 2012 Olympics, Rutherford took home the gold medal on the most successful day for Britain at the Games in 104 games. 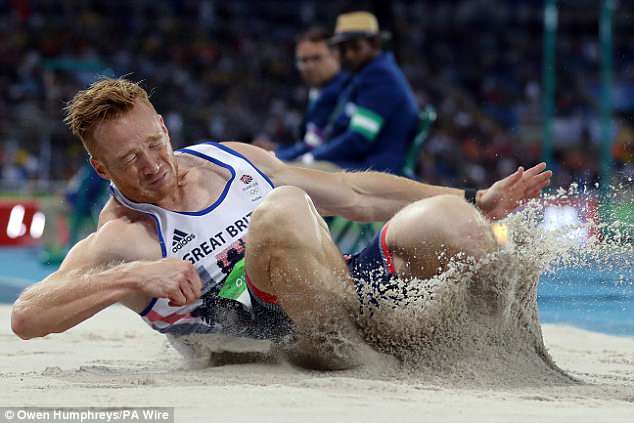 Greg Rutherford announced his retirement in June 2018 and will stop competing at the end of the season because of persistent injuries.

The Olympic gold medallist, who has barely featured over the past 18 months because of his left ankle, admitted that his pain is at the root of his decision.

However, he may participate and aim for a third straight European crown in Berlin in August if he is up to it, marking his last summer on the athletics circuit. Greg announced his retirement on Instagram and said: ‘I’m incredibly proud of my career.

‘It only feels like yesterday I was winning my first major medal but now 12 years on, I sit here as the greatest long jumper Great Britain has ever had, one of the most successful in European history and someone ready to hang the spikes up for good.’

Speaking to The Guardian, Rutherford said: ‘If you had told me 10 years ago I would be a five-time major winner, I would have bitten your hand off. ‘I am very content with everything I have achieved. It’s the right time to move on.’ Although he was not a victim of the Strictly curse during his participation in the 2016 series, Greg Rutherford’s time on the television programme was not without its drama. Reports revealed that he had a ‘total meltdown’ after the judges criticised his rumba and the sportsman was left fuming.

Strictly judge Craig Revel Horwood awarded Greg and his partner Natalie Lowe a meagre four points out of 10 and Greg allegedly raged about being treated in an unfair way and had to be calmed down by four people.

Viewers also took to Twitter and said that his son Milo ‘looked like a girl’ because of the clothes that he was wearing when he visited his father during a dance training session.

Susie Verrill responded on her blog and said: ‘I know a top knot for a little boy is still a bit iffy and am, of course, well aware it makes my cherub-faced son resemble a girl. I’m not a total moron and I do have the ability to see.

‘I don’t think boys should stick to blue, black, trucks, robots, footballs and monsters. Of course, we love all that stuff, but so will any future daughter of ours (if we happen to have one). Milo does wear blue, he just didn’t happen to today.’

Susie Verrill told Femail: ‘People should just focus on the joy of that moment [when Milo and Rutherford danced in the VT] not what the toddler was wearing.

The author added: ‘Parents with children who want to make their own clothing choices can offer them limited options and let their children decide what to wear as long as it’s practical. Who cares if it’s green or purple?’ 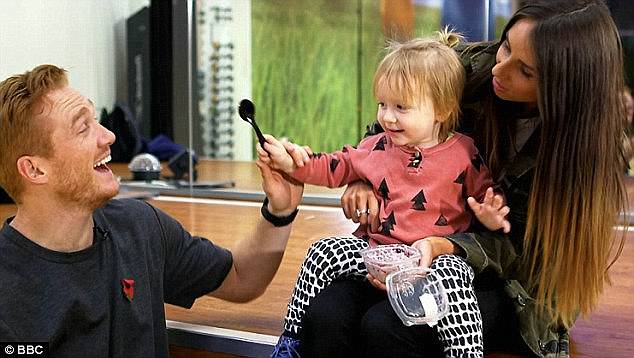 Those who follow Susie Verrill on Instagram will know about her daily struggles looking after their two sons, Milo and Rex but the couple are in no rush to get married after revealing that they do not want ‘a lifetime of misery and s*** sex’.

Speaking to her followers, she read through comments on an online article about her and spoke openly about how she ‘had sex with two England rugby players. One was retired, What can I say, I like sports men.’

Susie added: ‘Yeh, Greg thought I was a virgin until I met him. Big surprise, woman has sex and has a type. Big thighs.’

Susie and Greg met in 2012 and exchanged messages for two months before going on a bowling date. The couple now live in Aspley Guise near Milton Keynes. 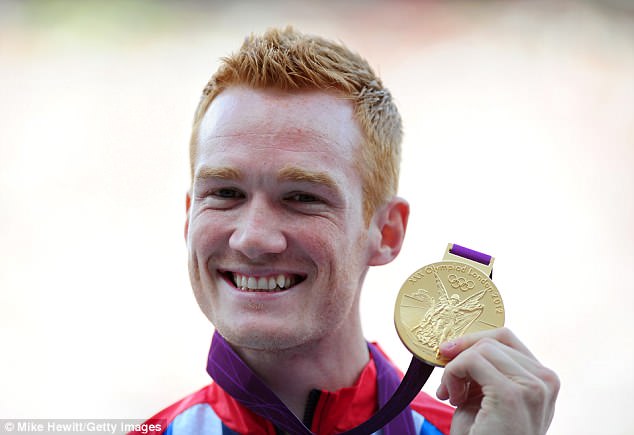 A definite member of the Gold Medal rich list, Greg Rutherford’s net worth has accumulated to approximately £3.7 million. This figure is considered to be quite low for an Olympian but his success has somewhat put him on the marketing map.

In 2013, it was reported that Greg did not have any endorsement deals or sponsors to his name after his long-standing kit contract with Nike expired, despite winning gold at the Olympic Games a year before.

Rutherford was forced to make money with television appearances and speaking engagements to pay his mortgage, which also took him away from his training.

‘I’m not poor. I’d be lying if I said I was. But if people believe that the reason I go on TV is because I love the sound of my own voice, that is completely and utterly wrong. Range Rover gave me a lease car that I can drive for free, which is amazing, and Omega gave me a watch.

‘That’s all fantastic, and there have been some free clothes here and there, but ultimately it doesn’t put food on the table, so you are in a scenario where you are forced to do promotions and appearances,’ he said.

He went on to say that the afterglow of the Olympics was not what he expected and thought that winning his gold medal would mean that he would not have to worry about his finances. Rutherford’s Nike contract was reduced that resulted in Greg ‘earning probably less than I would have done on my old junior contract’. 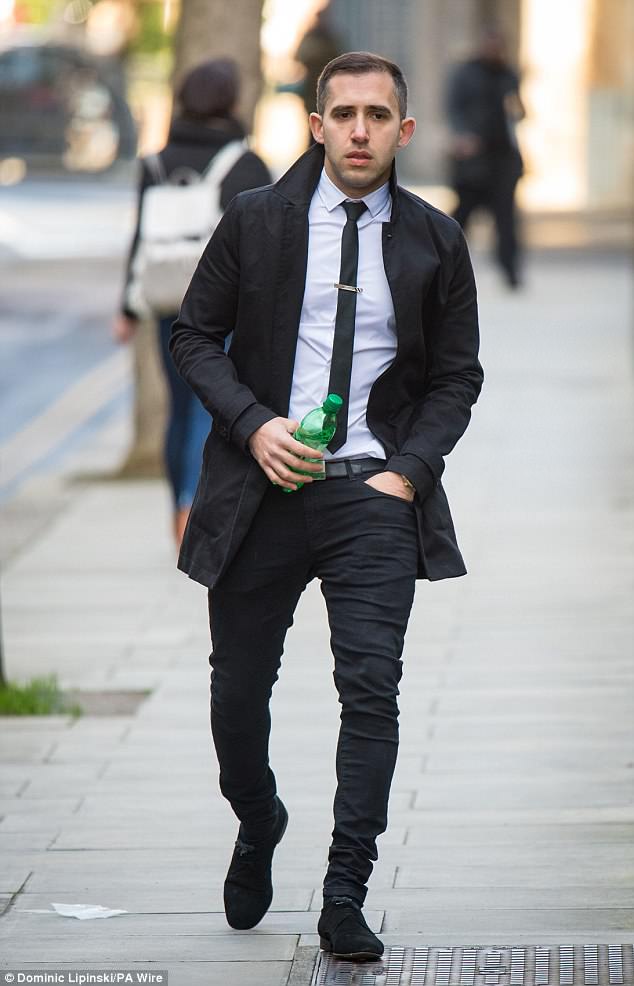 Nike responded and said that the reduced contract was because of a more driven focus on younger and up-and-coming athletes. ‘It’s as if they’re saying, “You’ve done really well at the Olympics but you’ll never do it again and so we’re not interested”,’ he said.

Greg made a point of wearing his Milton Keynes club vest at the Diamond League opener in Shanghai and set up his own clothing brand called ‘GRavity’. Rutherford also stopping receiving income from other brands that he had affiliations with in the run-up to 2012.

‘People weren’t paying much to see me endorsing their brand because I didn’t have a gold medal, but they still have the images of me which they can use now,’ he said.

After discussing the contrast of Mo Farah and Jessica Ennis Hill’s endorsement deals, Greg continued: ‘There is a bizarre culture in British athletics where people berate the athletes for making money.

‘Look at the outcry at Mo being paid to run in the London Marathon. But what incentive is there for others to take up athletics instead of other sports when you can win the Olympics and not really get anything from it?’

In 2017, Greg Rutherford discovered that his former manager Gaby Stone had cheated him out of £48,000 to fuel a gambling addiction.