Rain in Spain set to cause real pain… for parents: Flood alerts for Benidorm and Majorca as half-term weekend begins

Brits heading to Spain this weekend for the half-term holidays are being warned to brace themselves for a deluge of rain and flooding.

Weather warnings have been issued covering tourist hotspots in the east of the country including Benidorm, Alicante and Majorca.

And forecasters predict that some parts are expected to see up to 19 inches of rain over the next two days with the heaviest of downpours due to come tomorrow. 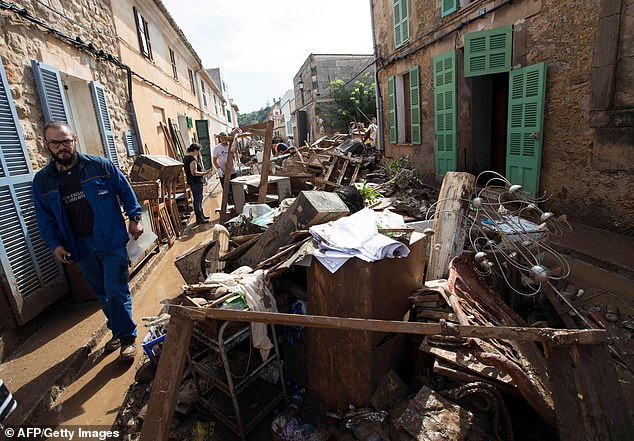 Forecasters are predicting that eastern Spain is going to be hit with a deluge of rain and flooding ahead of the half-term holidays. Pictured is flood damage in Majorca last week after flash floods

The rain and thunderstorms are being caused by a strong warm air conveyor system bringing a large amount of moisture to the region.

The Spanish meteorological agency has now issued both red extreme risk and orange important risk warnings for areas such as the Costa Brava, Valencia, Catalonia and the Balearics.

And police in the Alicante region are said to be stepping up patrols warning locals and tourists of the ‘severe weather conditions’. 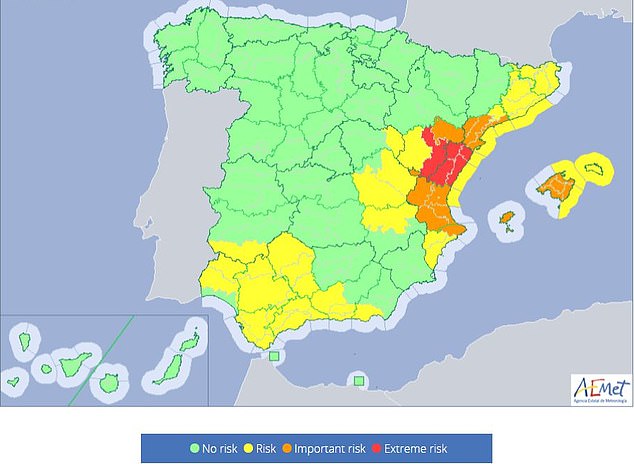 The Spanish meteorological agency has issued red and orange warnings for bad weather covering areas such as Benidorm, Alicante and Majorca

Grahame Madge, a spokesman for the Met Office, told MailOnline Travel: ‘Eastern Spain is going to be experiencing some very, very heavy rainfall, and red warnings have been issued.

‘This is partly because of a weather pattern affecting the region, which is a strong warm air conveyor system that is carrying a significant amount of moisture.

‘These areas can expect to see rainfall totals in excess of 250mm rising to 500mm over the next few days. 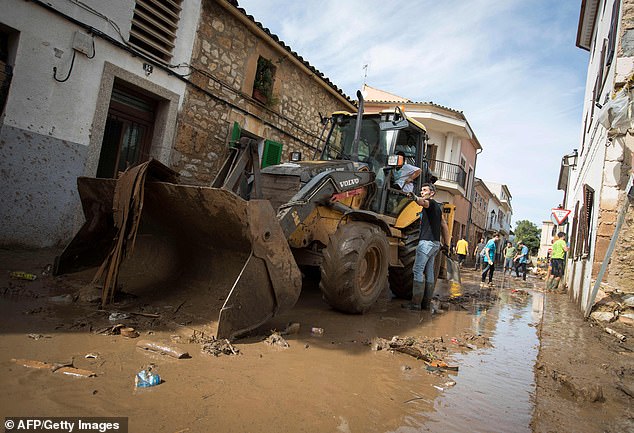 ‘This brings a significant risk of flash flooding and there is also a strong possibility of thunder and lightning.’

Destinations set for pleasant conditions across this weekend and into next include Paris, Nice, Rome, the Greek islands, Cyprus and the Croatian resort of Dubrovnik.

A week ago flash floods hit Majorca, killing an elderly British couple who drowned when their taxi was swept away.

At least eight other people died after eight inches of rain fell in four hours and a river burst its banks.

Locals swam for their lives as a 13ft wall of water raced through Sant Llorenc des Cardassar – where TV’s Love Island is filmed – battering houses and sweeping cars away with people stuck inside. 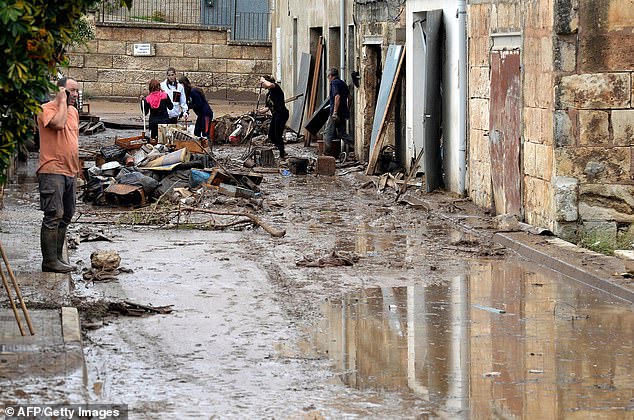 Locals in Sant Llorenc des Cardassar earlier this week after water raced through the town, battering house and sweeping cars away

Last month, the holiday resort of Benidorm was also hit with torrential downpours.

Holidaymakers were filmed floating down flooded streets on lilos, refusing to let the horrid weather ruin their break.

Some tourists were even spotted using an upside-down table as a makeshift surfboard.

The south of France was also battered with bad weather as was Porto in Portugal, which was hit with 125mph winds.