The horrific CDC graph that shows how US fentanyl deaths have soared more than 1,000% in six years

In recent years, rates have risen sharpest among Hispanic and black Americans, and particularly among young people aged 25 to 34. 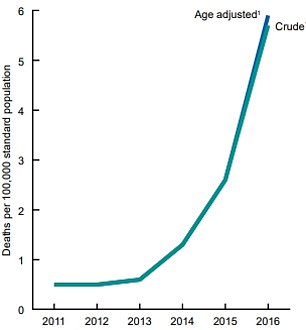 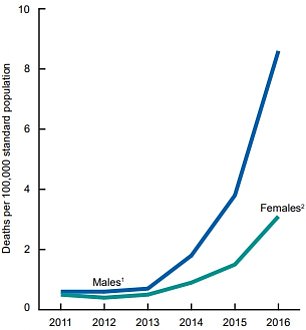 Fentanyl deaths have soared, as the overall CDC data (left) show. Men are dying at triple the rate of women, another graph shows (right)

In recent years, rates have risen sharpest among young people aged 25 to 34

Fentanyl took hold of America in the grips of the opioid addiction epidemic.

After decades of hyperactive opioid prescribing, US clinics had produced a generation of Americans hooked on highly addictive pills.

While many got their fix from their doctors, those who could not get or afford more prescriptions turned to the street – to heroin and street-sold prescription pills.

Fentanyl is a supremely powerful alternative to heroin; just a couple of milligrams could be lethal to an adult male. 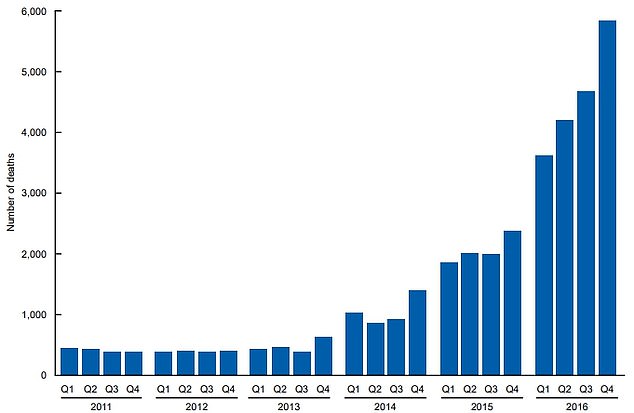 It was a handy alternative for drug traffickers who produce the stuff: heroin relies on the growth of poppies, and is subject to environmental hiccups. Fentanyl is made in the lab, quicker and cheaper.

Drug tests and autopsies over the last few years revealed the drug was gradually being cut into everything – from cocaine to Percocet – as well as being sold straight for addicts who has built up tolerance to heroin’s effects. Fentanyl, addicts say, breaks through their barrier.

For most, its strength is unfathomable, and overdoses are common.

The new CDC data hammer that home, and show how swiftly the drug took hold of the US.

On a graph published in the report, the lines for deaths related to oxycodone, morphine, hydrocodone, and methadone all snake steadily at the same level, claiming between one and two deaths per 100,000 between 2011 and 2016.