The 1950s had been an age of kitsch motels, wacky-looking shops and eccentrically designed restaurants popping up along the roadsides of America.

But by the 1970s, out-of-town shopping malls and interstate highways meant these colourful businesses were all struggling for customers and many closed down and became abandoned.

But they won’t be forgotten, thanks to US photographer John Margolies, who documented these eye-catching businesses over a period of decades with photographs that would eventually be added to the National Register of Historic Places. 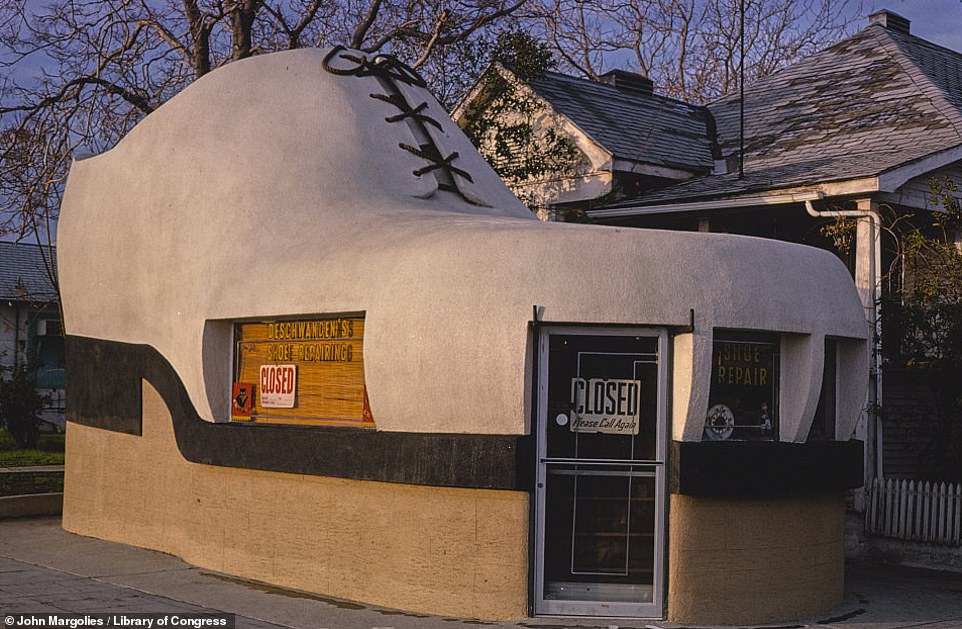 Deschwanden’s Shoe Repair shop pictured in 1977 in Bakersfield, California, which was built in the shape of a boot 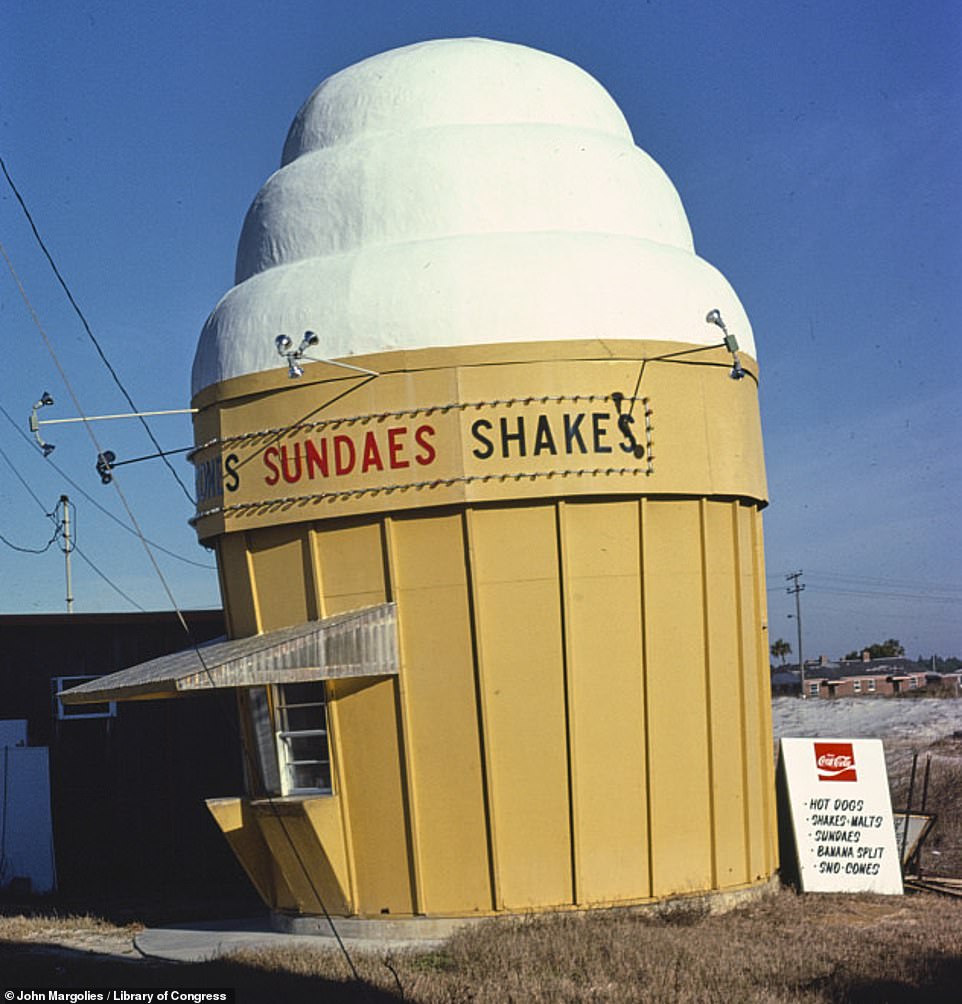 An ice cream stand built in the shape of an ice cream cone on the side of a road in Long Beach, Florida. Mr Margolies snapped the picture in 1979 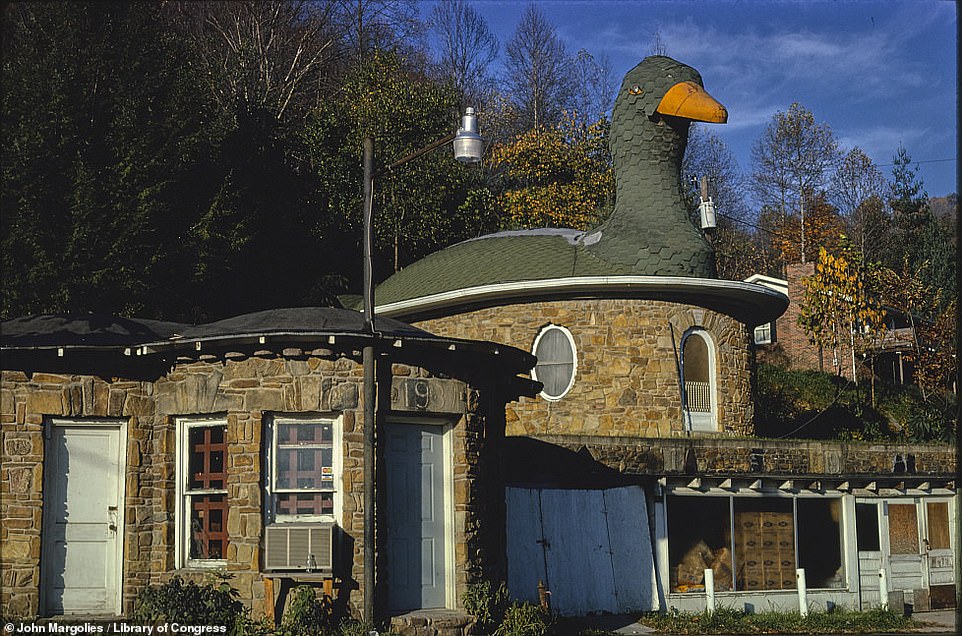 Driverd passing through Hazard, Kentucky, on Route 476 in 1979 were greeted at the roadside with a giant bird sitting on top of the Mother Goose Market 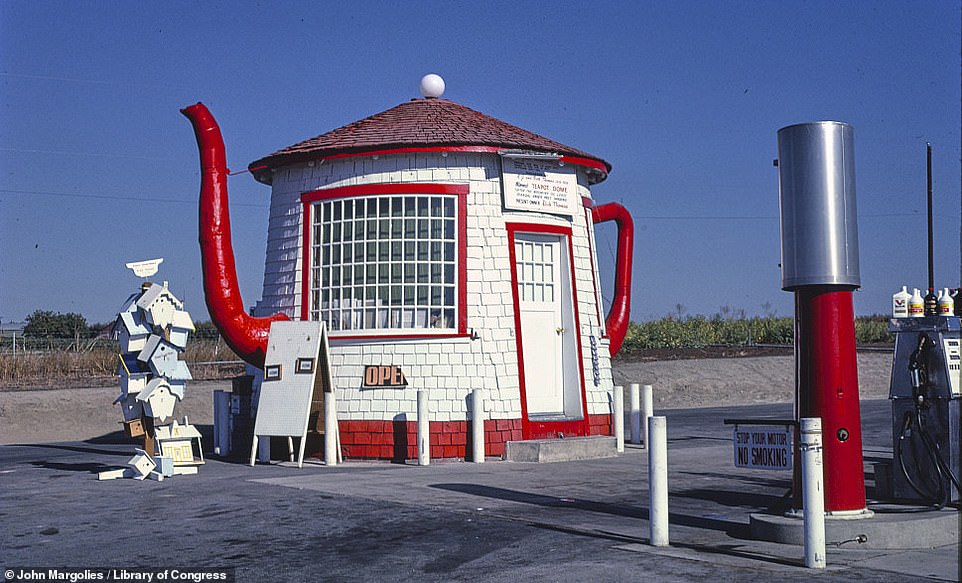 Drivers filling up their cars at this gas station in Zillah, Washington, were greeted with a teapot-shaped building. Mr Margolies captured this image in 1987 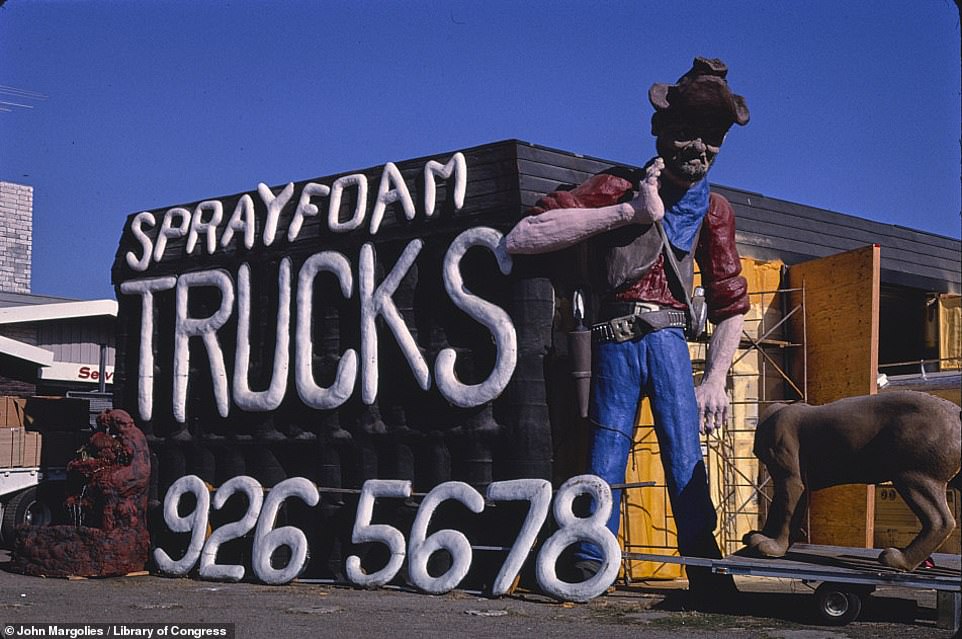 Spray Foam Trucks in Albany, Oregon, pictured in 1987, was certainly visible from the roadside thanks to its huge prospector statue and sign

The unusual buildings sprung up in earnest in the 1950s when car ownership skyrocketed in America and businesses across the country took the opportunity to draw in new customers by setting up on roadsides.

With competition fierce and in a bid to stand out from the crowd, many went for outlandishly designed – almost psychedelic – buildings to grab drivers’ attention.

Up popped a shoe repair store in California shaped like a boot, a gas station in Texas with a massive cowboy hat and boots and a pizza restaurant with a mini ‘Leaning Tower of Pizza’. 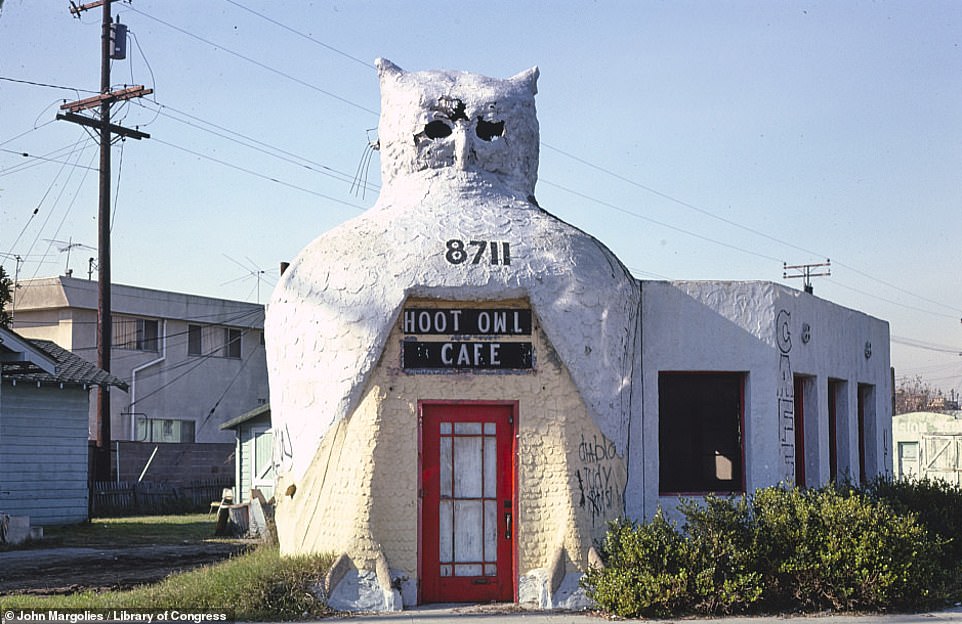 The Hoot Owl Cafe in Southgate, Los Angeles, drew in the crowds as the eyes in the top of the owl, made from Buick headlights, would blink. Mr Margolies captured this shot in 1977 – two years before it was demolished 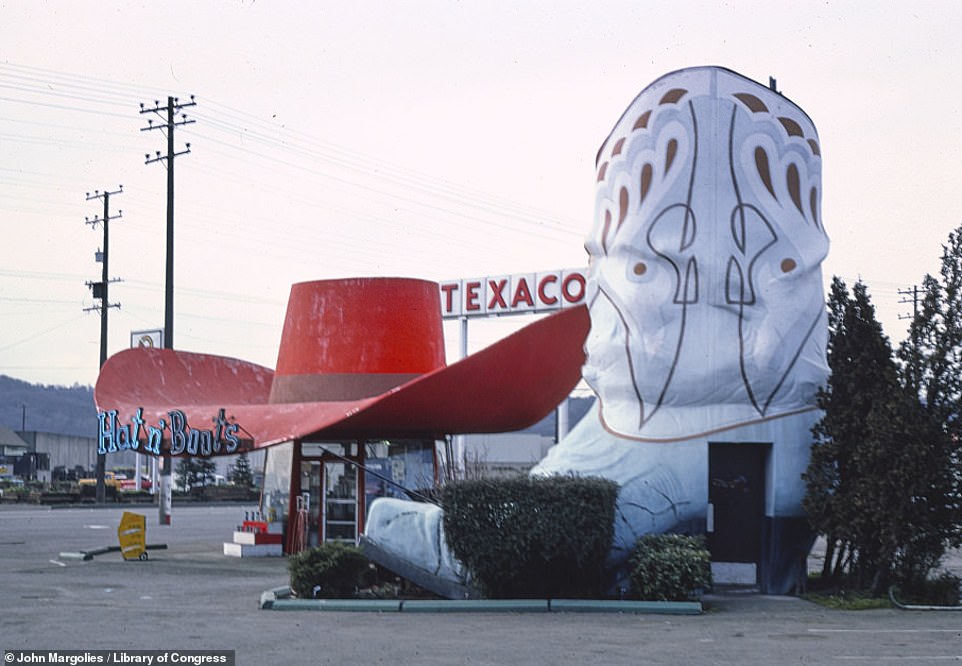 This shot of the Hat ‘n’ Boots gas station on Route 99 in Seattle, Washington, was taken in 1977. The gas station dated back to 1945 and appeared in the movie National Lampoon’s Vacation 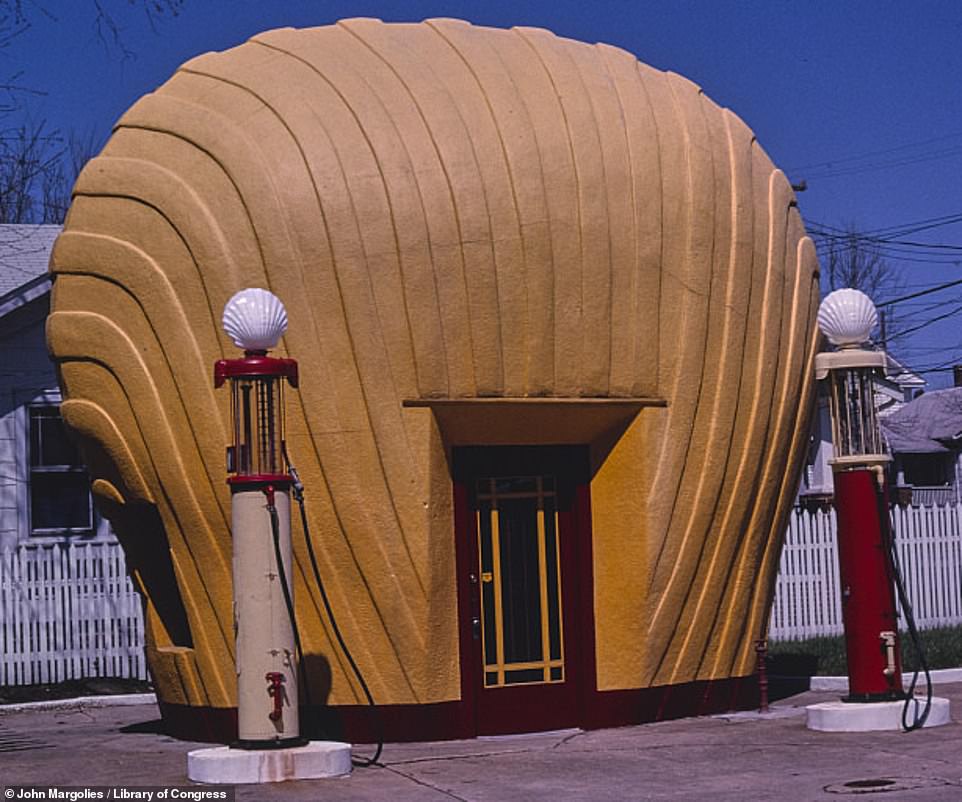 Harold’s Auto Center on Route 19 in Spring Hill, Florida, in 1979. The business is still in operation today 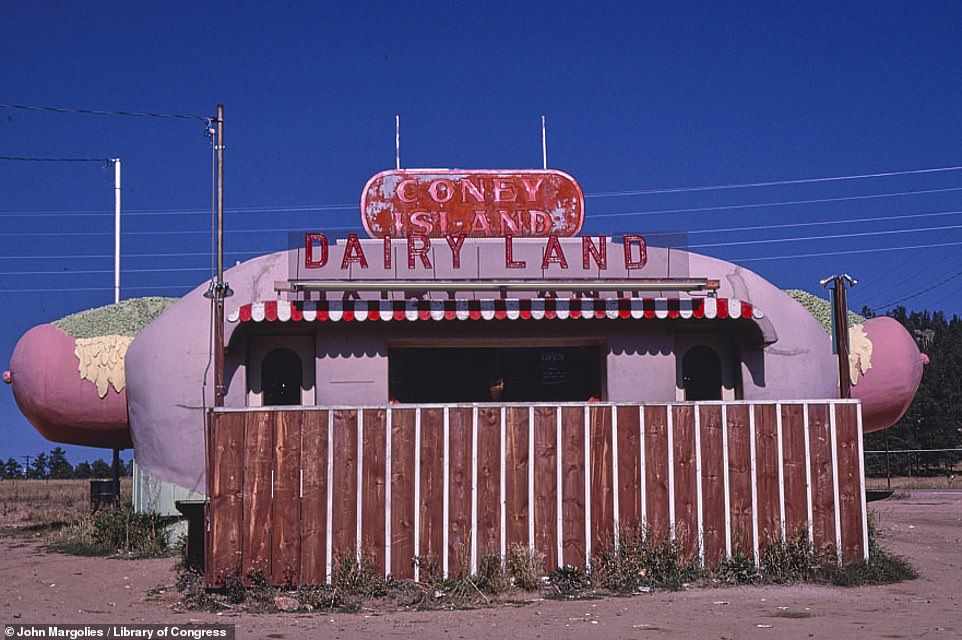 The Coney Island Dairy Land snack stand on Route 285 in Aspen Park, Colorado, appears to lie empty in this 1980 photograph 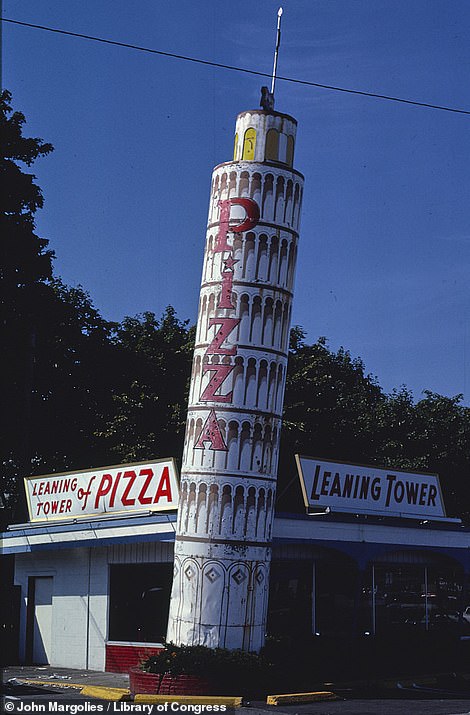 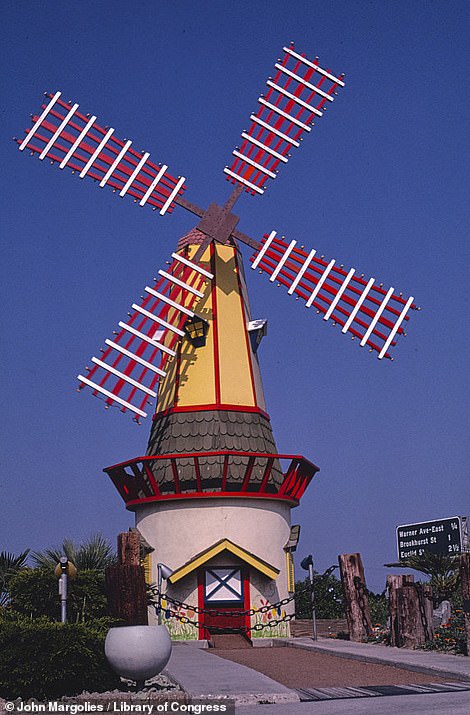 A vintage shot of a worn Leaning Tower of Pizza restaurant taken in 1984 in Quincy, Massachusetts (left). It is now believed to have been demolished. Mr Margolies stumbled across this windmill at the entrance to the Fountain Valley mini golf attraction in 1981 in Fountain Valley, California

Mr Margolies began photographing them in 1969 and so was able to save them for posterity when they began shutting down in huge numbers in the 1970s and 80s.

Up to 2008 Mr Margolies, from Connecticut, drove for thousands of miles across the country, snapping images of the sometimes dilapidated buildings.

Some of his photography odysseys lasted two months.

‘My parents’ generation thought it was the ugliest stuff in the world,’ he told The Washington Post in 2015. ‘I liked places where everything was screaming for attention: “Look at me. Look at me.”’ 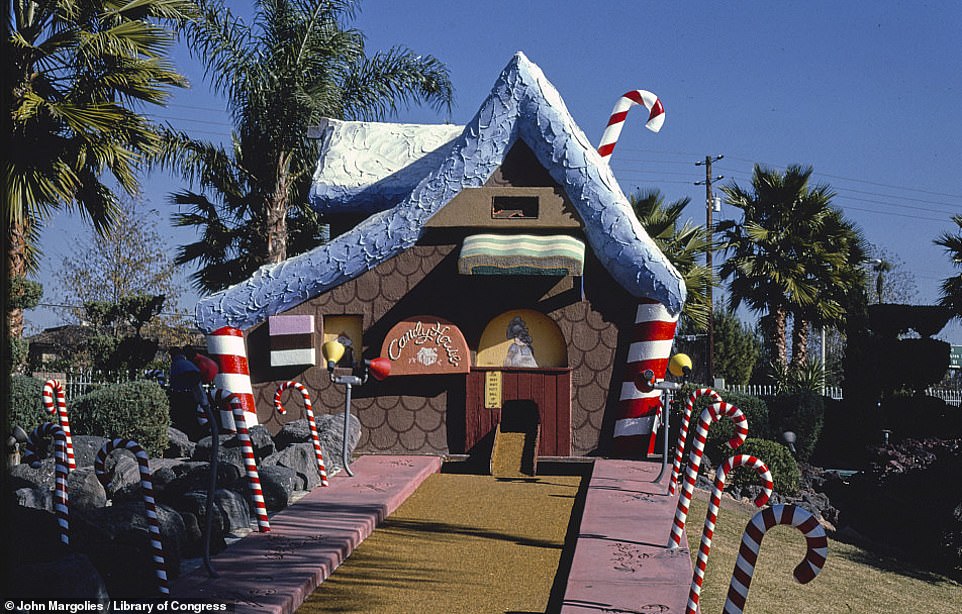 The Candy House at the then Castle Amusement Park in Riverside, California, in 1985. Around the time the picture was taken, the park was extended 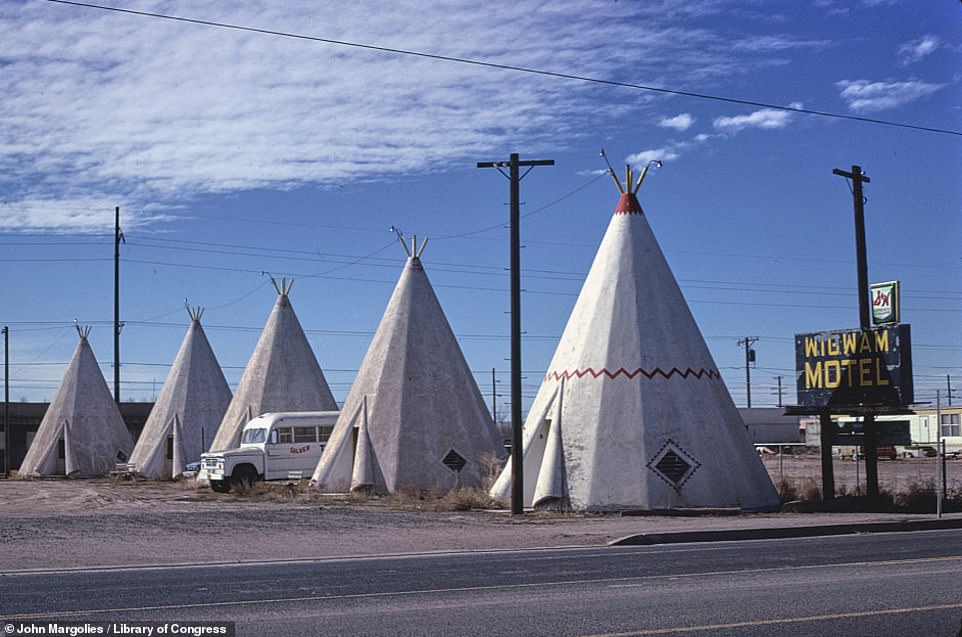 Drivers looking for a quirky place to stay on Route 66 in Holbrook, Arizona, can check into the Wigwam Village Hotel

He would generally rent a Cadillac and shoot his images with a Canon camera outfitted with a basic lens.

His pictures often showed the buildings with no humans or cars in sight and against the backdrop of a clear, blue morning sky.

Margolies wrote in his 2010 book, Roadside America: ‘I love the light at that time of day; it’s like golden syrup. Everything is fresh and no one is there to bother you.’ 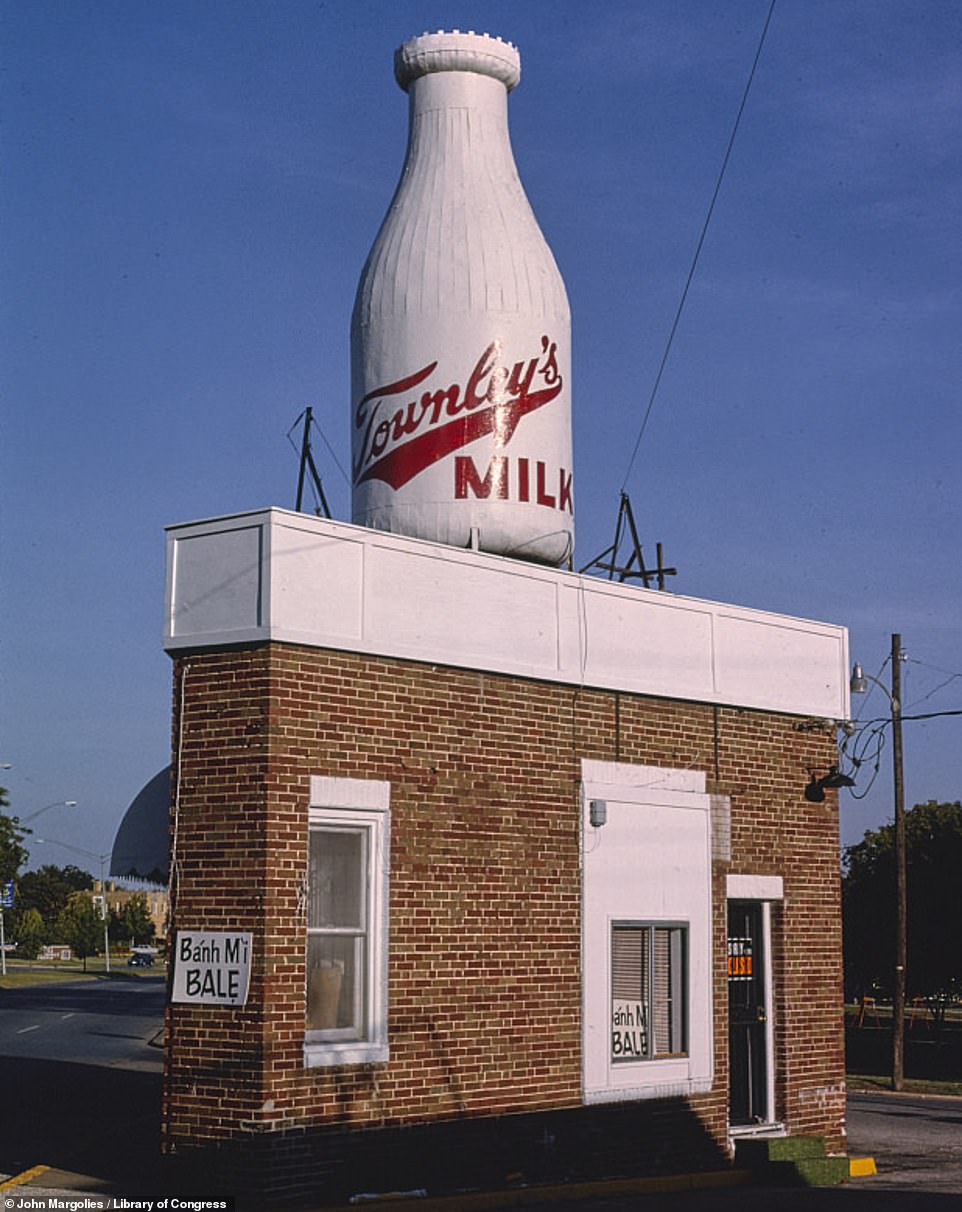 The Townley milk bottle sits on top of the Townley Dairy building in Oklahoma City. It was snapped in 1993 and has been abandoned since 1998 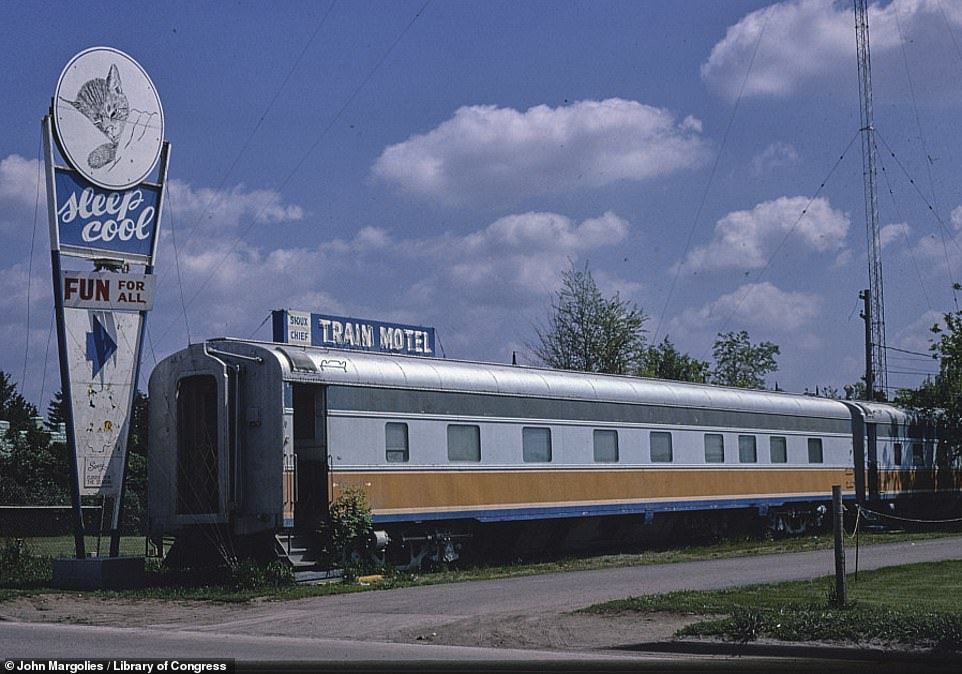 Taken in 1980, this shot shows the Sioux Chief Train Motel in Sioux Falls, South Dakota. When the business failed the cars were sold off separately to private businesses 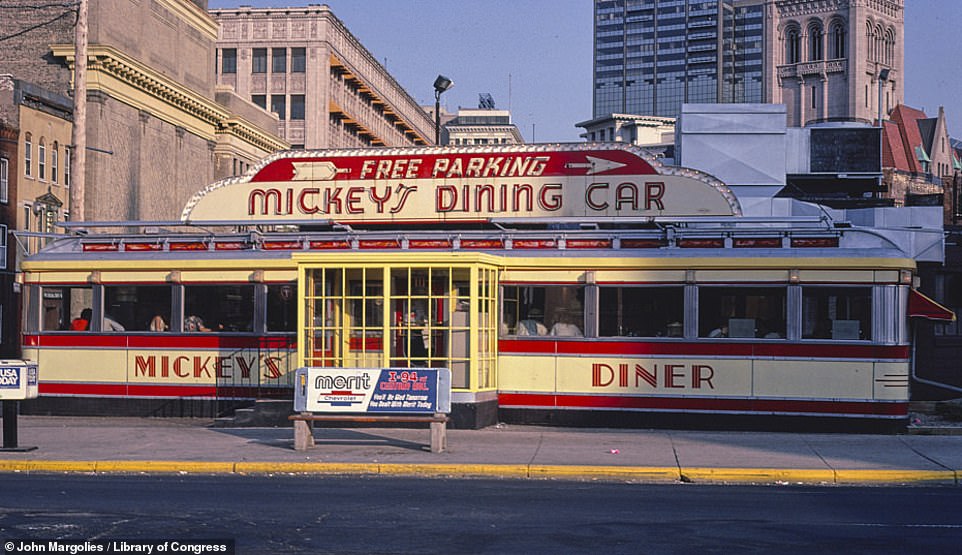 Mickey’s Dining Car on West 9th Street in St Paul, Minnesota, in 1984. It still operates as a 24-hour diner today

It noted: ‘Traversing the country, he was drawn to the architecture that came to define travel by car — motels, diners and gas stations — but also to quintessentially American oddities.

‘Buildings in the shape of dinosaurs, the sculpted concrete and plaster obstacles of miniature golf courses and parks featuring attractions from parrots to petrified rocks.’

MailOnline first revealed some of Mr Margioles’s pictures last year. But since then the Library of Congress has added many more to its Flickr account and says it will be adding previously unseen shots as it sorts through the archive. 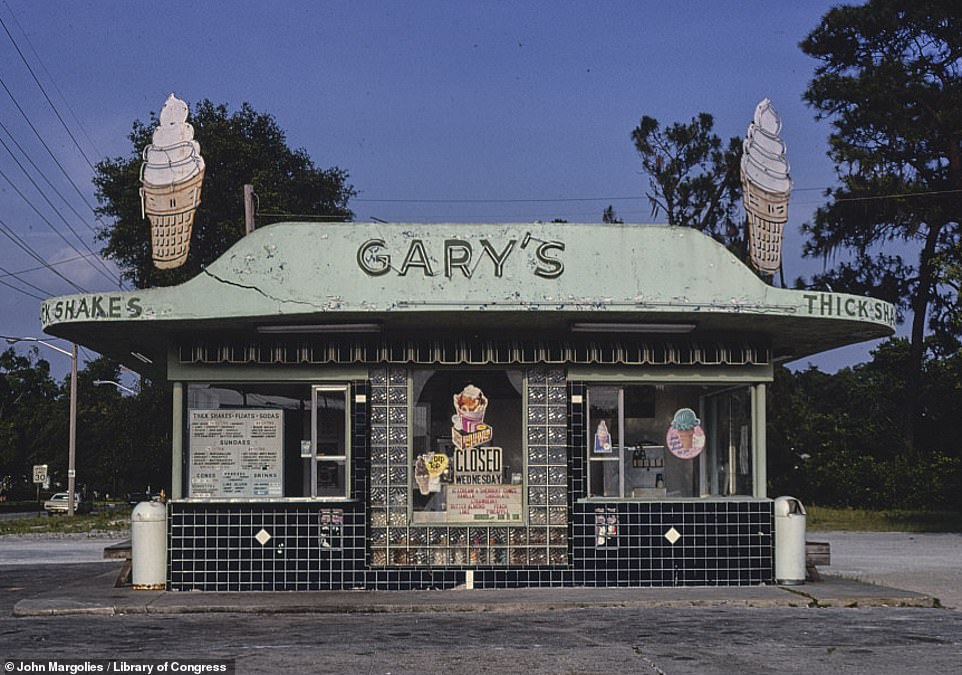 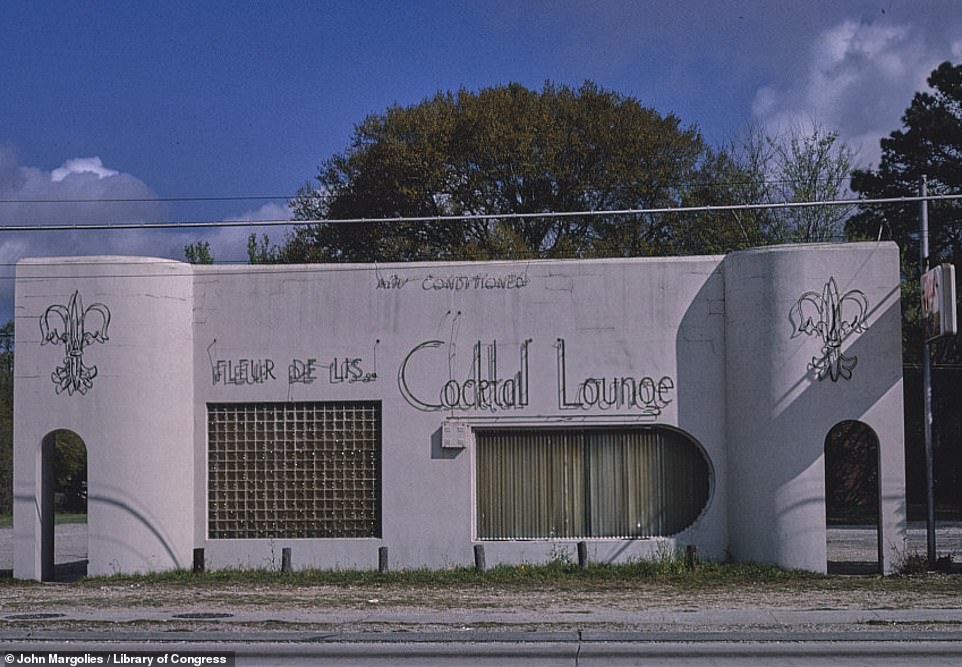 The Fleur De Lis Cocktail Lounge on the side of Government Street in Baton Rouge, Louisiana, in 1982. The building remains today but it is now a pizza restaurant 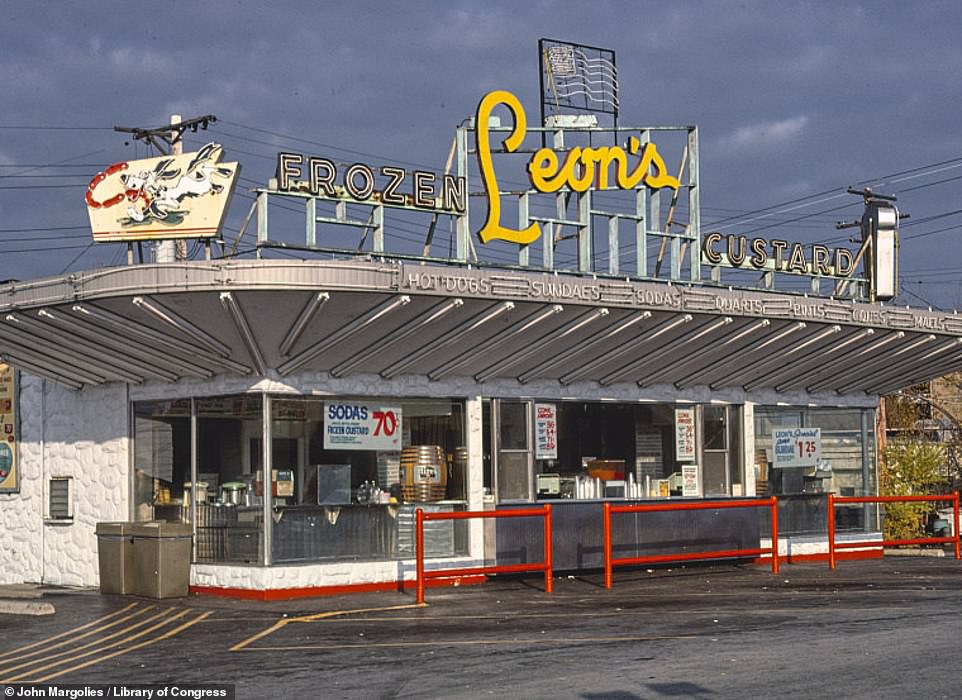 The former Leon’s Drive-In restaurant at the side of the road on South 27th Street in Milwaukee, Wisconsin, in 1977. This business is still in operation today