The death of a former president in most countries around the world would normally make headline news domestically. But not the case for Egypt, where ex-President Mohammed Morsi died at the age of 67 on Monday after collapsing in a courtroom during his trial on spying charges.

His sudden demise barely registered in Egyptian media – in fact, papers there prioritised Egypt’s hosting of the forthcoming 2019 African Cup of Nations on its front pages, and instead relegated Morsi’s death to the inside pages usually designated for criminal affairs.

The state-run channels failed to even mention that Morsi – the first democratically-elected leader in Egypt – was a former president, instead referring to him with his full name.

The coverage was short and to the point – just 42 words (in Arabic) both in print media, radio and on television:

“Mohammed Morsi died yesterday during his trial in an espionage case. The deceased asked the judge to speak and the court gave him permission. After the court was adjourned, he fainted and died. The body was transferred to hospital and the necessary procedures are under way.”

An Egyptian news anchor unwittingly put a spotlight on the similarities between the reports in an on-air gaffe on Tuesday.

Whilst reading from a teleprompter, Extra News TV’s Noha Darwish signed off her report with the words: “This was sent by a Samsung device.”

She appeared visibly confused and embarrassed when she realised her mistake, pausing for a few seconds before continuing to read the news bulletin.

According to the opposition Mada Masr website, the story was sent to news editors across Egypt “by a government entity” via Whatsapp messenger.

“This came with instructions to place the brief account of Morsi’s death on the inside pages as opposed to the front page,” the website said, quoting an anonymous newspaper source.

Extra News TV is affiliated with a private equity fund which, according to Mada Masr, has links with Egypt’s intelligence services.

The BBC was unable to reach the Egyptian authorities for comment on the story.

Morsi had largely fallen out of the spotlight after his ousting by the military as president in 2013.

A year earlier, he was chosen as the Muslim Brotherhood’s presidential candidate after the Islamist movement’s first-choice candidate was forced to pull out of the race.

However, his first – and only – year in office proved to be a turbulent time, with Morsi accused by his critics of mounting an Islamist coup and mishandling the economy. He faced mass anti-government protests which led to the military suspending the constitution and detaining him.

Under his successor Abdul Fattah al-Sisi, the authorities launched a crackdown on Morsi supporters and the now-banned Muslim Brotherhood which saw hundreds killed and tens of thousands detained.

Why was Morsi’s death downplayed?

“Security agencies send messages or emails to the TV channels, giving them a script on how to cover a particular news item or specific issue,” he told the BBC.

“With Mohammed Morsi, they wanted to limit the information available on him and present their own version of the story – the story being that they were not responsible for his death. They also wanted to present his rule as though he was an abuser from the Muslim Brotherhood who fooled a population.”

The media landscape has transformed under Mr Sisi’s presidency, with the authorities increasing their control over both traditional and social media to an unprecedented degree. 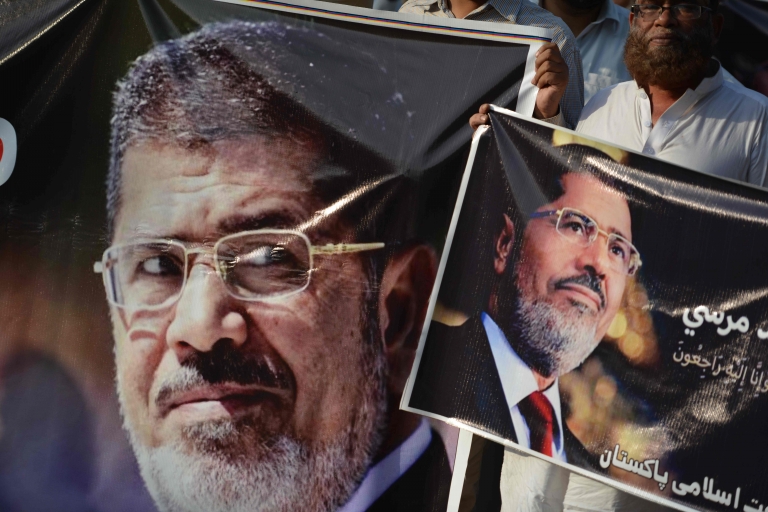 Mohammed Morsi died yesterday during his trial in an espionage case… After the court was adjourned, he fainted and died

According to Mr Baoumi, Mada Masr is one of the few remaining independent websites still operating in Egypt, and people have to circumnavigate heavy censorship of the site by using virtual private networks (VPNs) which use servers abroad to provide a secure internet link.

Reporters without Borders (RSF) ranks Egypt 163 out of 180 countries worldwide for press freedom, describing it as “one of the world’s biggest prisons for journalists”.

Three years later, he ratified another controversial law that allowed the state to tighten controls over the internet and block websites if they are deemed to be a threat to national security or the economy.

“The authorities have waged a witch-hunt since 2013 against journalists suspected of supporting the Muslim Brotherhood and have orchestrated what we call a ‘Sisification’ of the media,” RSF’s Sabrina Bennoui told the BBC, citing the terrorism and cybercrime laws.

“Since then, journalists are forced to report only the official versions of ‘terrorist’ attacks and it was made possible to prosecute and imprison journalists, censor newspapers and close websites.”

Ms Bennoui says while there is no confirmation that the government dictated the 42-word report on Morsi’s death, the former president was considered a member of a terrorist group and so these strict reporting restrictions would have probably applied to coverage of his death.

At the time of his death, Morsi was serving numerous prison sentences on several charges – and rights groups, including Amnesty International and Human Rights Watch, had criticised the conditions in which he was being kept in prison.

The Egyptian authorities have accused the UN of “politicising” Morsi’s death, after it called for an independent investigation into his demise.