A four-year-old girl who had a cold turned blue and suddenly died at home, her devastated parents have revealed.

Chloe Hardy – who was seemingly fit and healthy – collapsed at her home in South Cave, Humberside, on Wednesday, March 13.

Her family have been told she had suffered a fatal heart attack, though her death has yet to be investigated by a coroner. 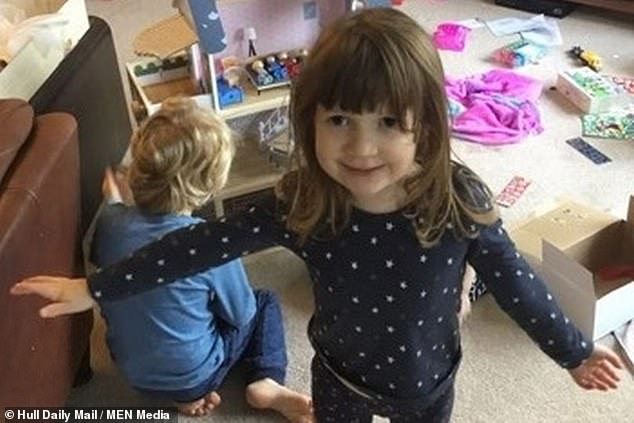 Chloe Hardy – who was seemingly fit and healthy – collapsed at her home in South Cave, Humberside, on Wednesday, March 13

Chloe, who loved Superman and Spiderman, was best friends with her twin sister Charlotte.

Paying tribute to her daughter, Caroline Hardy, 38, said: ‘I am heartbroken at the loss of my beautiful girl.

‘Chloe was so special to us and will be greatly missed. I have a huge gap in my heart but she will never be forgotten. There are no words to express the sadness we feel.’

Chloe, who also had a seven-year-old brother, William, had been suffering ‘a little bit of a cold’, according to her father Adam, 42.

He said: ‘My wife was giving her some medicine, she didn’t want it so she got up from her chair she ran off to her bedroom. 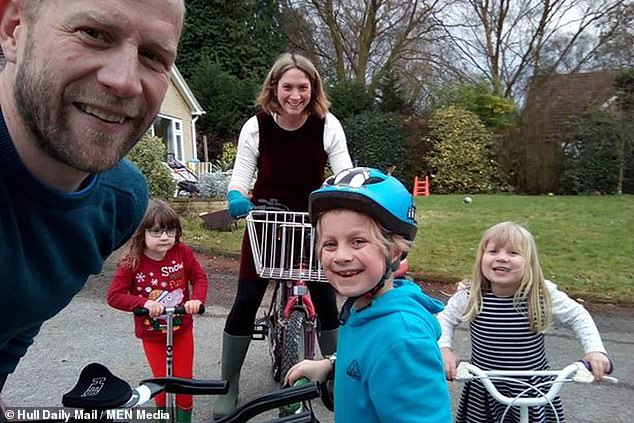 Chloe had been suffering ‘a little bit of a cold’, according to her father Adam, 42 (pictured with Adam, brother William, her mother Caroline and twin Charlotte)

‘My wife followed her, and straight away she was turning blue. Her heart stopped beating and she was instantly gone.

‘She wasn’t choking or anything like that, she wasn’t struggling for breath, it was instant.’

Mr Hardy rang 999 and Mrs Hardy rushed her to the doctors surgery in South Cave – The Ridings Medical Group – which is less than a minute’s drive from their house.

He said: ‘She got there in less than a minute and in less than three minutes Chloe was receiving CPR by a doctor.

‘The GPs were really good, they were straight out to help her, but nothing they could have done would have brought her back, at no point did she come back at all.

‘We could have waited for an ambulance but we didn’t want to wait ten minutes, amazingly my wife kept a level head and got her to the surgery.’

Paramedics worked on Chloe in the ambulance on the way to Hull Royal Infirmary, but there was nothing they could do to save her.

Mr Hardy said: ‘Our whole family are in terrible shock after our beautiful daughter died suddenly. We are devastated.

‘Chloe has a twin sister, Charlotte, they are non-identical twins and were completely opposite, both in appearance and personality – but they were undoubtedly best friends.

‘Chloe was the more shy, softer, gentler one. She liked singing and would break into spontaneous song for no reason, she also liked dancing.

‘Charlotte gravitated towards unicorns and princesses, but Chloe loved superman, spiderman, digging and painting – anything that was mucky.

‘She also loved water play – we struggled to get her out the bath. She never bothered with dolls.’

The couple said Chloe had ‘come on in leaps and bounds’ over the past year and was growing into a loving, caring girl, with an endearing ‘random’ streak.

Mr Hardy said: ‘Chloe was a bit behind when she was younger, it took her until she was two to walk. It was a bit like having a child who was a year younger than she was.

‘She didn’t come for cuddles and would enjoy playing on her own, but over the past year she has come on so much and changed so much and became so loving.

‘She used to do random things like throw a slipper out of her bedroom door in the middle of the night because it wasn’t hers.

‘It’s difficult to cope with how quiet the house is, it’s only been a week and I’m missing the chaos Chloe caused – we liked that chaos and you don’t realise how you will miss it until it’s gone.’

Chloe’s parents do not think her twin sister fully understands what has happened.

Mr Hardy said: ‘I don’t think Charlotte really understands it. I don’t think she comprehends where her best friend has gone. She maybe thinks she has gone somewhere without her.

‘Her brother is seven and he understands it more and has taken a bit of comfort in thinking she is in heaven which he has learned about at school.’

The couple are ‘putting a brave face’ on their heartache for the sake of their other children, and have also thanked their family and friends for their support.

Mr Hardy said: ‘I don’t know how we will cope. Once the children are in bed and we are left on our own at night you are left looking at the wall.

‘We are having to put a brave face on it, there’s not other option. What do you do when you’ve got two others?

‘If we just had the one child we would be sat in a room balling our eyes out, but the priority is how the other two deal with it.

‘What we and my wife feel is secondary, of course we are devastated, but the main concern has to be trying to look after the other two.

‘I think we are still in shock, it’s not sunk in yet. The actual incident which was so unexpected and horrifying.’