A luxury London home that’s appeared in high-end advertising campaigns and on multiple top television shows has been put up for rent – for a cool £19,000 a month.

The stunning three-bedroom apartment is the handiwork of designer to the stars Sir David Adjaye, recently praised for his sleek take on the Brit awards statuette, and was built in 2004.

One would barely know from its modest brick exterior that behind the pedestrian-looking brown walls lies a marvel of design.

Industrial-looking Lost House, located on Crinian Street, close to King’s Cross, has provided a backdrop to shows including Silent Witness, Spooks and Lucky Man and has made cameos in ads for Hugo Boss, Rolex and lingerie brand Agent provocateur, raking in an estimated £200,000 from filming opportunities. 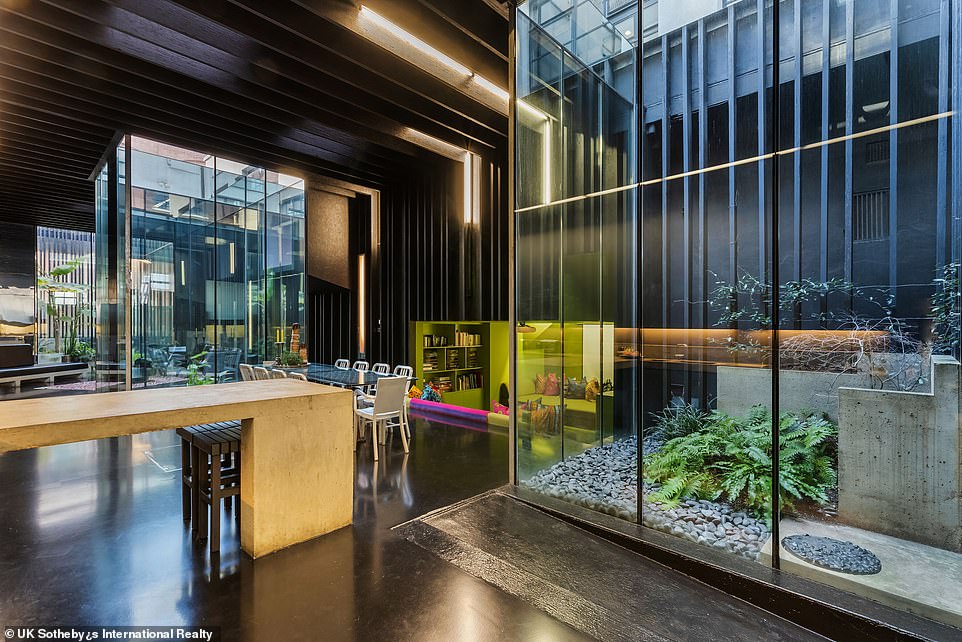 Lost House, close to London’s King’s Cross Station, is largely hidden from view but boasts a 60ft long living area, complete with a futuristic-looking kitchen and dining room, two indoor gardens and a sunken seating space with its own cinema 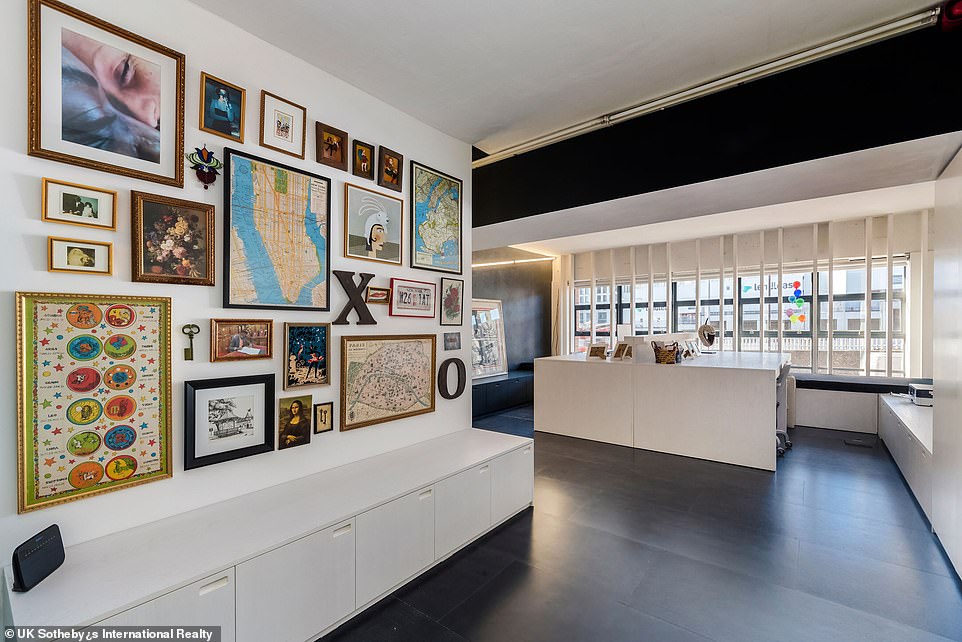 One bedroom, located above Lost House’s kitchen, can be used as a working space. The house has three bedrooms, one located on the ground floor, one on the top floor and the master bedroom in the lower floor 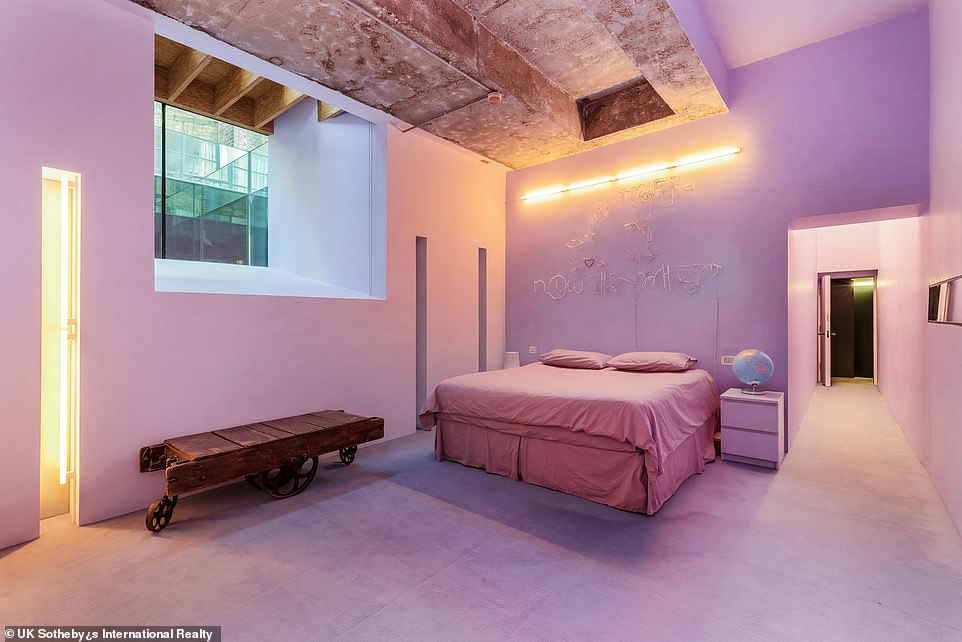 The master bedroom, located on the lower floor of Lost House. Above the bed is a neon sign in that owner Brian Robinson designed. It reads: ‘If not you then who, if not now then when?’ The Robinson mantra 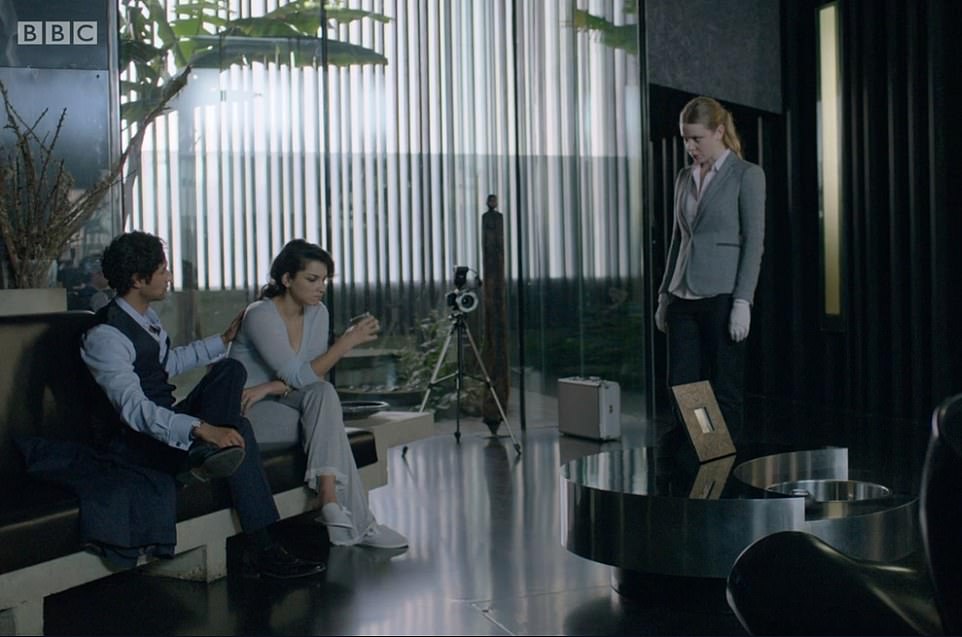 Star performer: PR expert Claire Sheils estimates that the couple who own the lavish pad – seen here in a 2015 episode of Silent Witness – might have made around £200,000 from its aesthetics 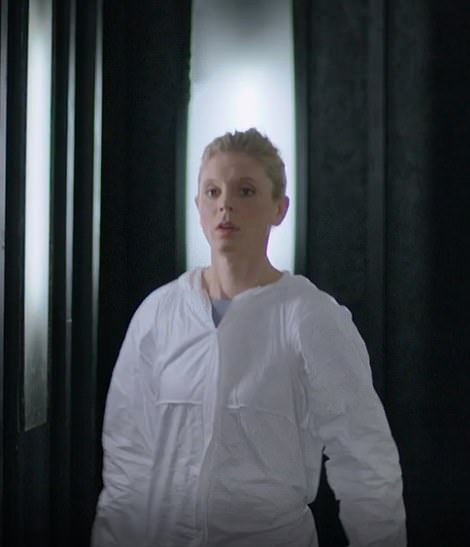 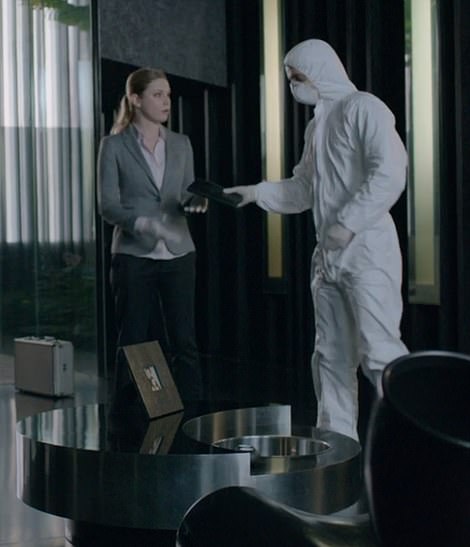 Emilia Fox, seen in a grisly episode of Silent Witness called Squaring the Circle Part 2, saw the actress padding around Lost House in a forensics suit. Right, actors investigated the apartment of a character called Maksim, after a body was found in it

Homeowners often get paid £2,500 a day for letting out their property to be used for a movie, TV show or advert. If used for a photoshoot in a magazine feature or for marketing purposes it might generate £500.

PR expert Claire Shiels thinks the couple might have made around £200,000 from their designer home.

She told MailOnline: ‘Homeowners can typically make up to anywhere between £500 – £2500 per day for a shoot.

‘For films, it all depends on how long the film is set in the location but if you base it on six weeks each time, then that would add an additional £185,000.

At the centre of this 3,674 square feet structure, there’s a 60ft-long living area that includes a steel-and-glass kitchen, a neon green dining area and a lavish living room that overlooks one of the two internal gardens. 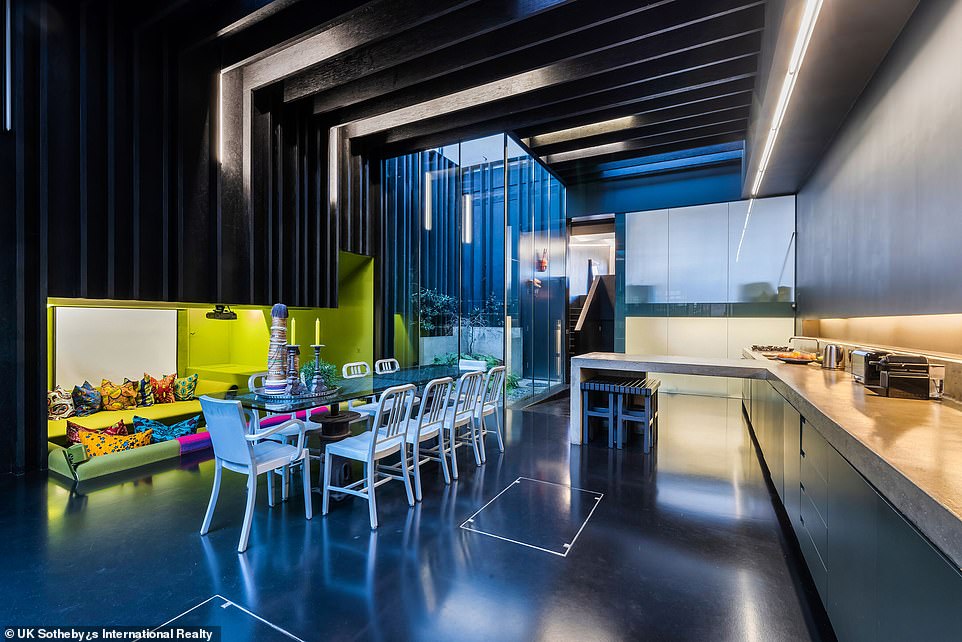 Another view of the kitchen and open dining room in Lost House. A previous owner said that in spite of the black and grey walls, the house doesn’t feel dark at all 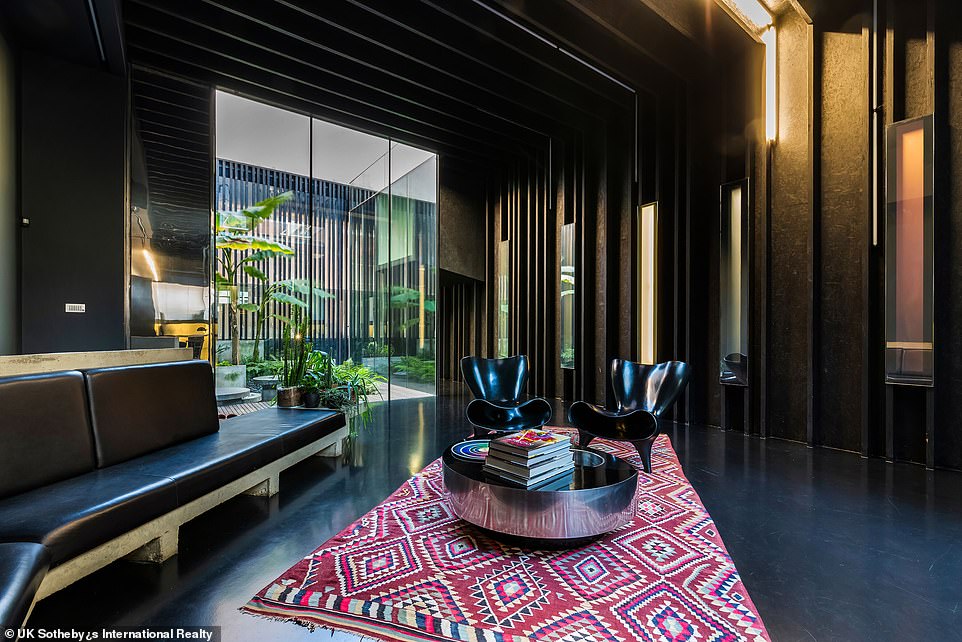 The living area in Lost House. The house was designed by designer Sir David Adjaye in 2004. Much of the furniture was also his creation 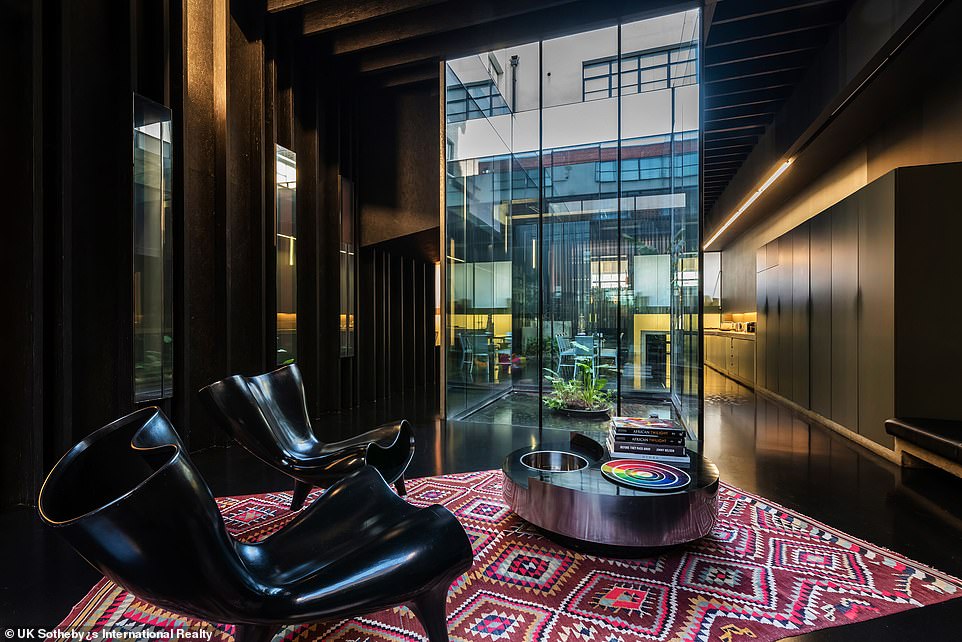 Another view of the living area. Only small changes were made to Lost House throughout the years. Designer David Adjaye still likes to drop in from time to time to show the space to his friends

A sunken seating area by the living-room is equipped with its own cinema area, with walls painted in neon green. Two large comfy sofa await their new owners, with multi-coloured pillows and a bookshelf, also green.

Beyond the kitchen you can find a guest bathroom and stairs leading to a bedroom that can also be used as a working space.

The house’s lower level comes with a guest-room with its bathroom and a master bedroom complete with its own en-suite bathroom, steam room and even an enclosed indoor pool.

Adjaye made a name for himself building houses for international stars like Ewan McGregor, Alexander McQueen and artists like Tim Nobble and Sue Webster. 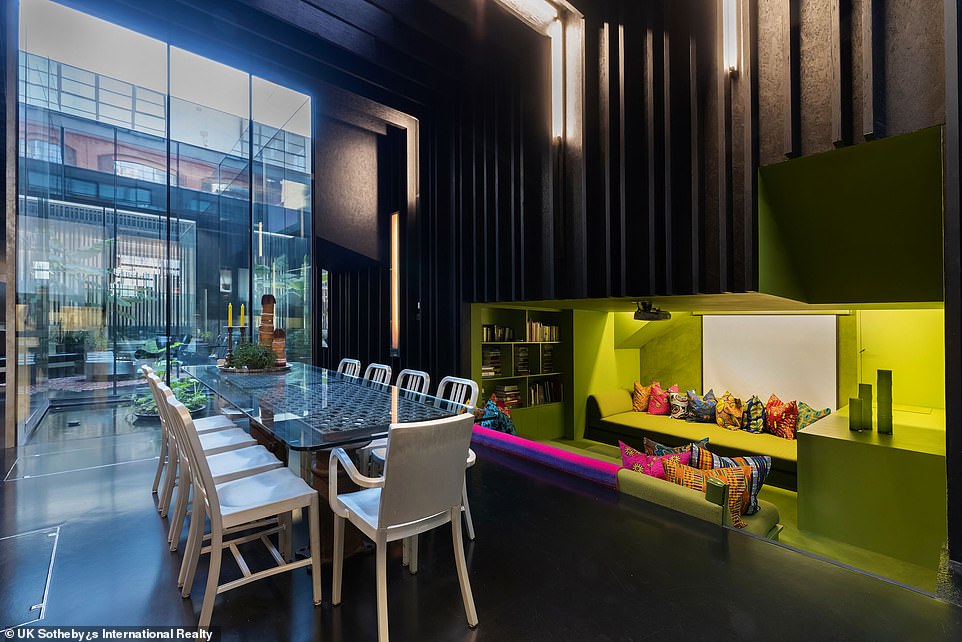 The sunken seating area, next to Lost House’s dining room. One of Lost House’s early owner painted this lounging space in neon green, and its next owner decided to stick with it 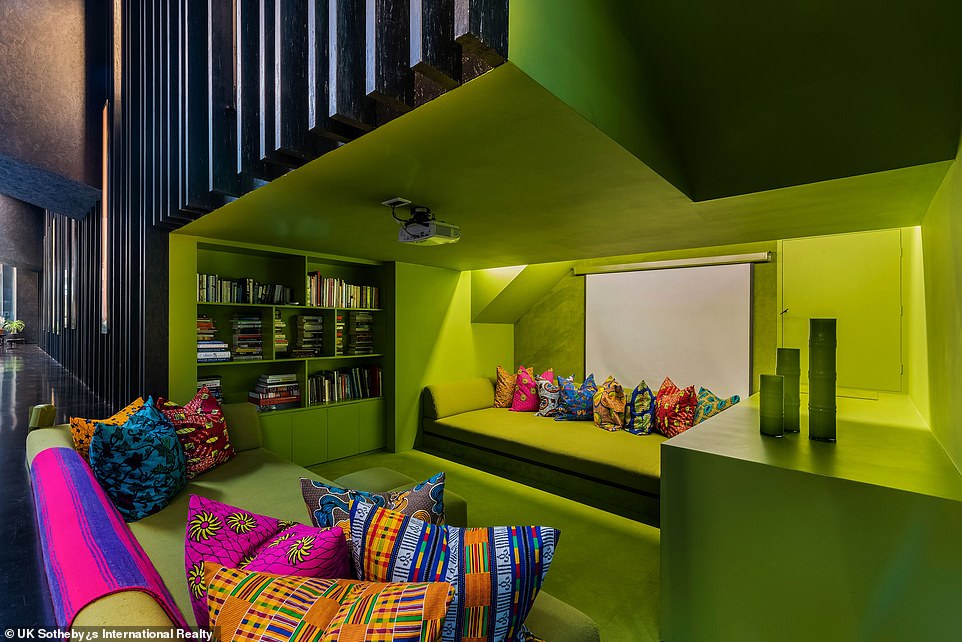 The sunken area next to the living space includes a cinema and comfy sofas. It offers a stark contrast with the other, darker tones of Lost House

The house is a little bit of a celeb itself, having appeared on several shows including Silent Witness, Spooks and Lucky Man.

It’s also a favourite among fashion designers and photographers. Luxury brands like Rolex, Speedo, Hugo Boss, Agent Provocateur, and even John Lewis have used it for photoshoots throughout the years.

Brian Robinson bought the house in 2008. His wife Jessica, a designer from the US used the upstairs bedroom as a showroom for her business.

‘The main part of the house is actually built in what was originally an alleyway,’ she told The Modern House. ‘There’s only one external window so the main space is lit by the three light wells that run through the central living area.’

While the walls of Lost House are either black or grey, Robinson said she didn’t think of it as a dark place at all. 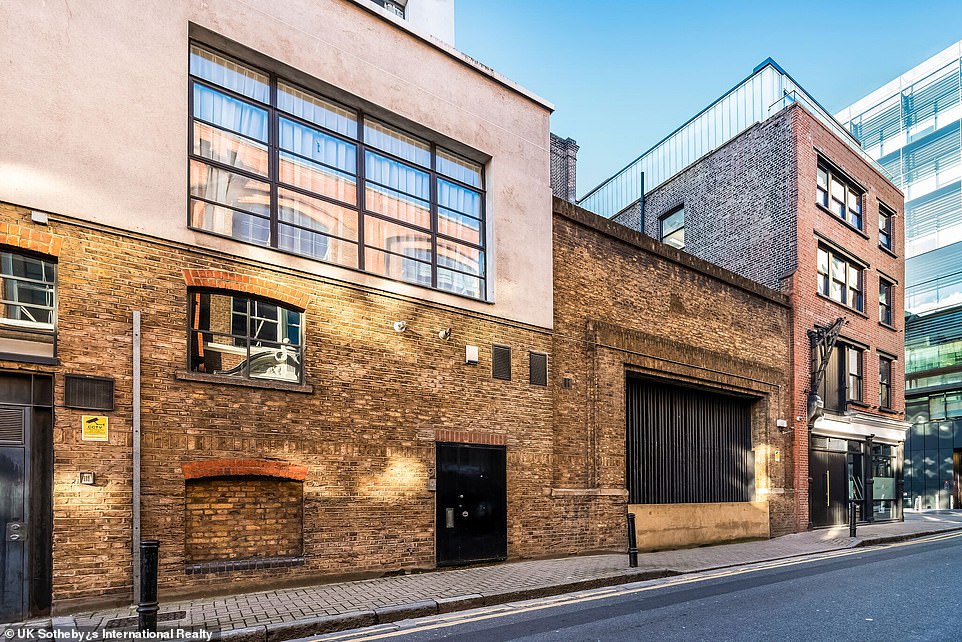 The exterior of Lost House, located near King’s Cross, London. The house is accessible from York Way, right by King’s Cross station 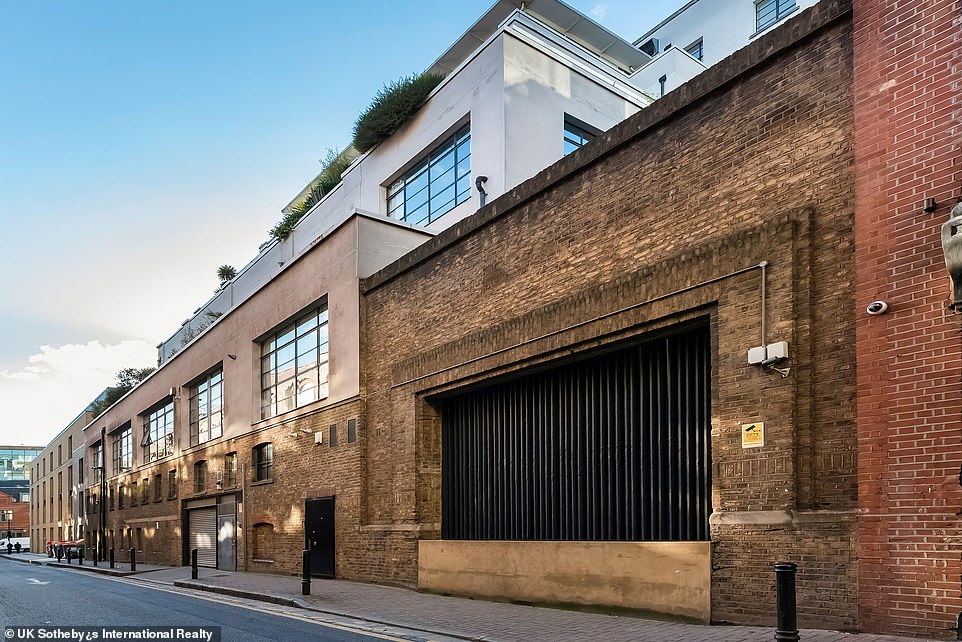 A view of Lost House from the outside. The main part of the house used to be an alleyway, but David Adjaye turned it into a vision of modern design 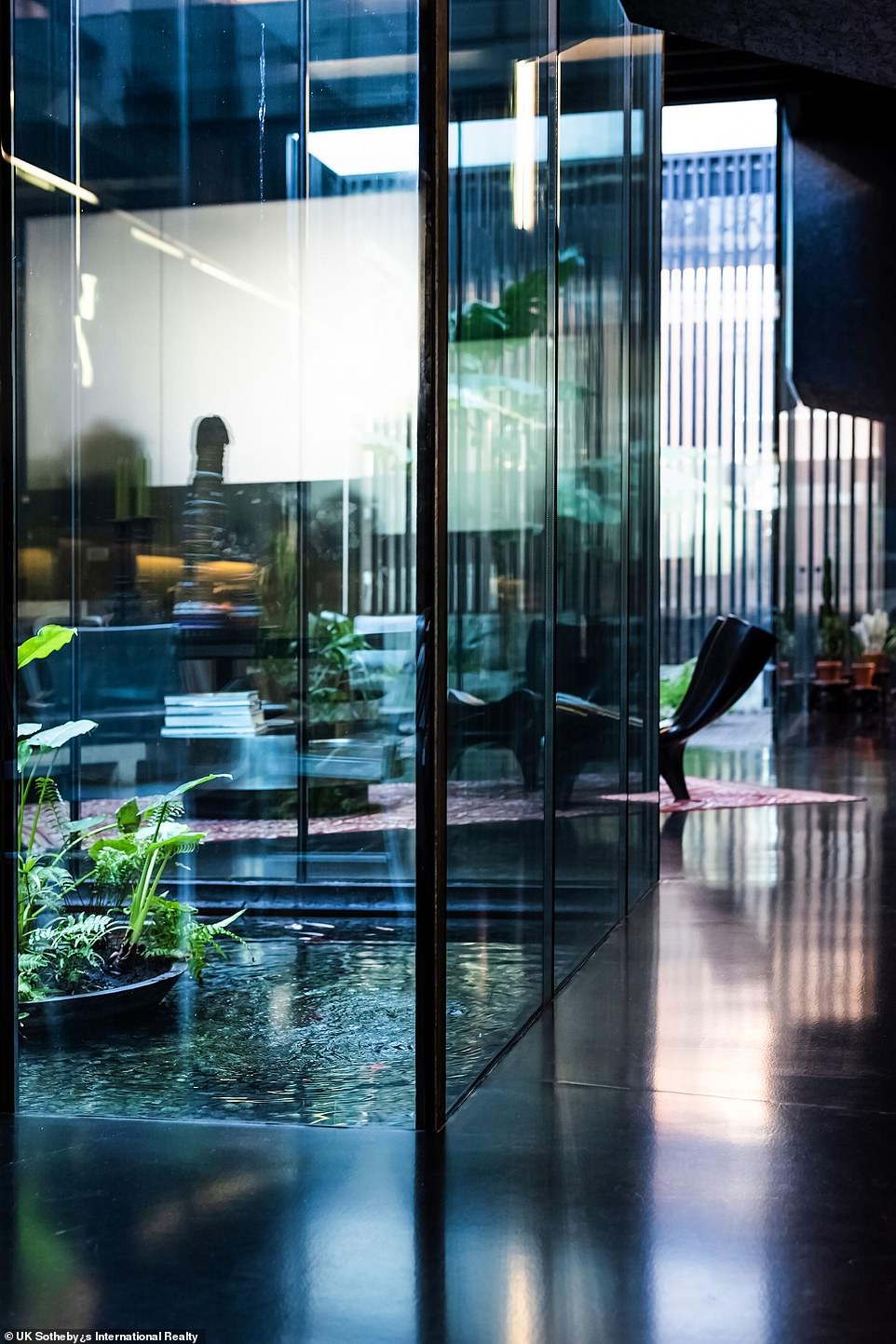 The fish pond of Lost House. The property features several one of the kind features, like its own steam room, an indoor pool and this fish pond

‘It is designed in such a way that the light is endlessly reflected through mirrors and reflective surfaces that are set within the walls.’

‘This house is like an artwork in itself so I live more simply here.’ she said.

Robinson added that the house is one of David Adjaye’s favourite projects and that he would occasionally pop in with friends who wanted to see the space.

Much of the furniture in the house was also designed by David Adjaye and owners have preserved his original styling over time, except for a few tweaks here and there. One owner had fashion shows in the 50ft-long living space while other planted different greenery in the gardens. 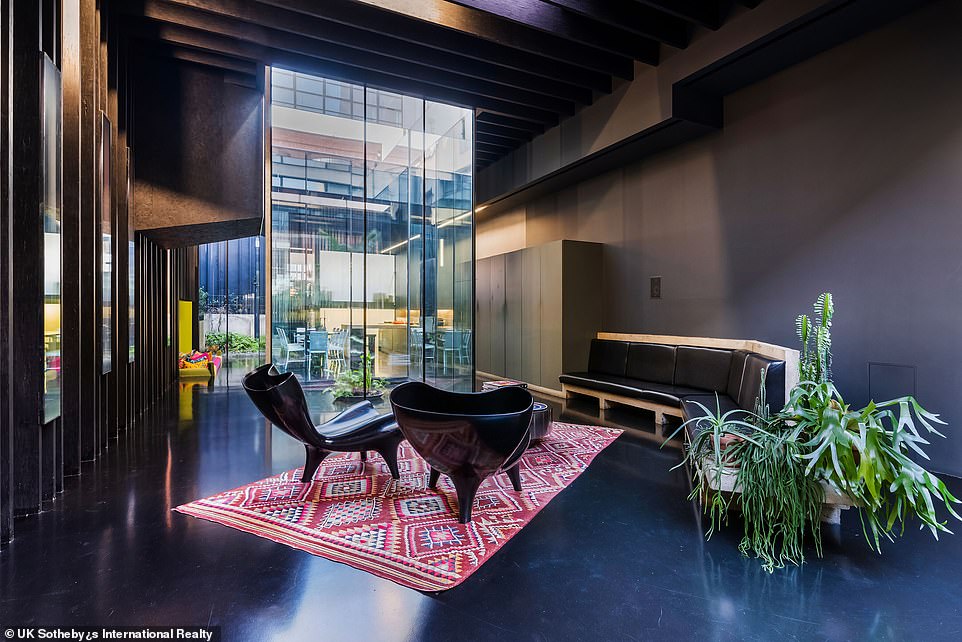 Another view of Lost House’s living area. The property located near King’s Cross has two indoor gardens and its own indoor pool 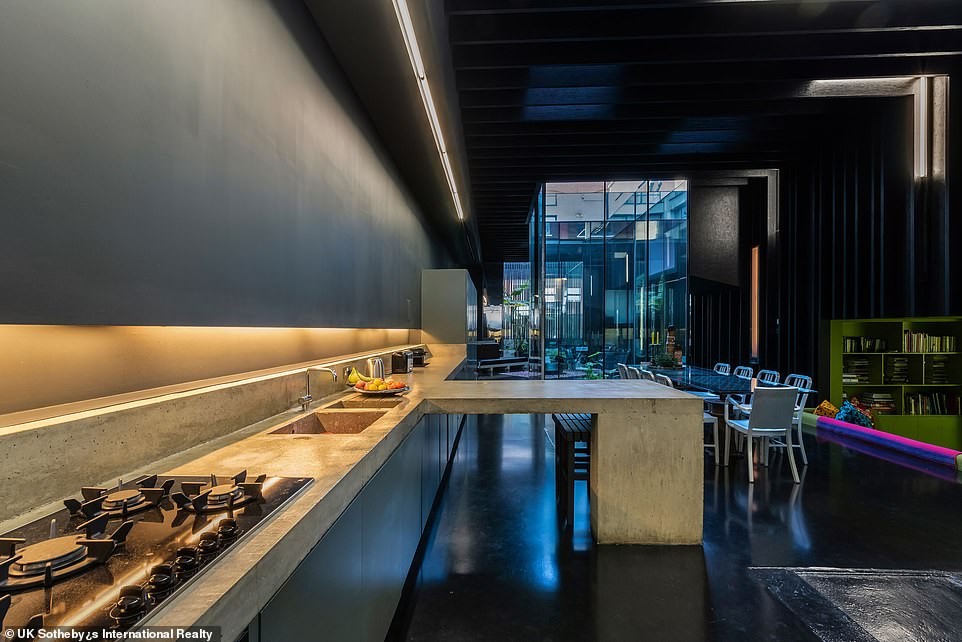 The cooking area in the beautiful kitchen of Lost House. Previous owner Jessica Robinson said the house encouraged simple living and was ‘artwork it itself’ 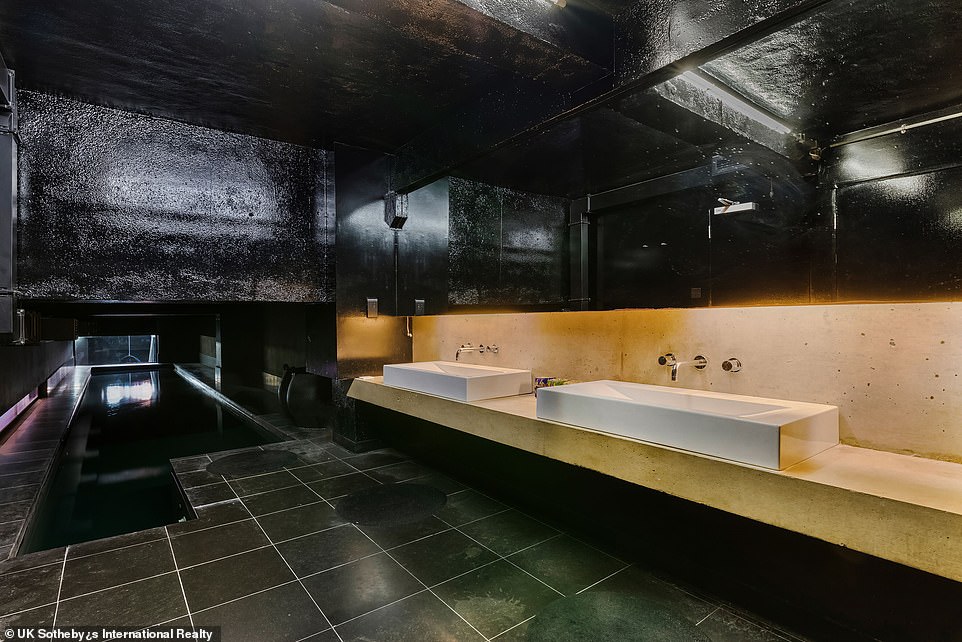 The master bedroom en-suite bathroom in Lost house. The bathroom is located on the house’s lower floor and is equipped with his and hers sinks

Born in Tanzania, Sir David Adjaye moved to the UK aged 9 years old. He studied architecture at London South Bank University, and got an MA in architecture from the Royal College of Art in 1994.

Just a year later he established his own practice with William Russell in 1994 called Adjaye & Russell.

Sir Adjaye was appointed OBE in 2007 for his services to British architecture.

He designed the Nobel Peace Center in Oslo in 2005 and was on a team of architects who designed the National Museum of African American History in Washington, DC in 2009.

Adjaye made a name for himself building houses for international stars like Ewan McGregor, Alexander McQueen and artists like Tim Nobble and Sue Webster.

‘I prefer not to make a house look a house. The aim for my buildings is to leave an individual impression based on how they’re experienced,’ he said.

Lost House was the first house he ever did in London

in 2019, Adjaye will design Ghana’s first ever pavilion at the Venice Biennale. 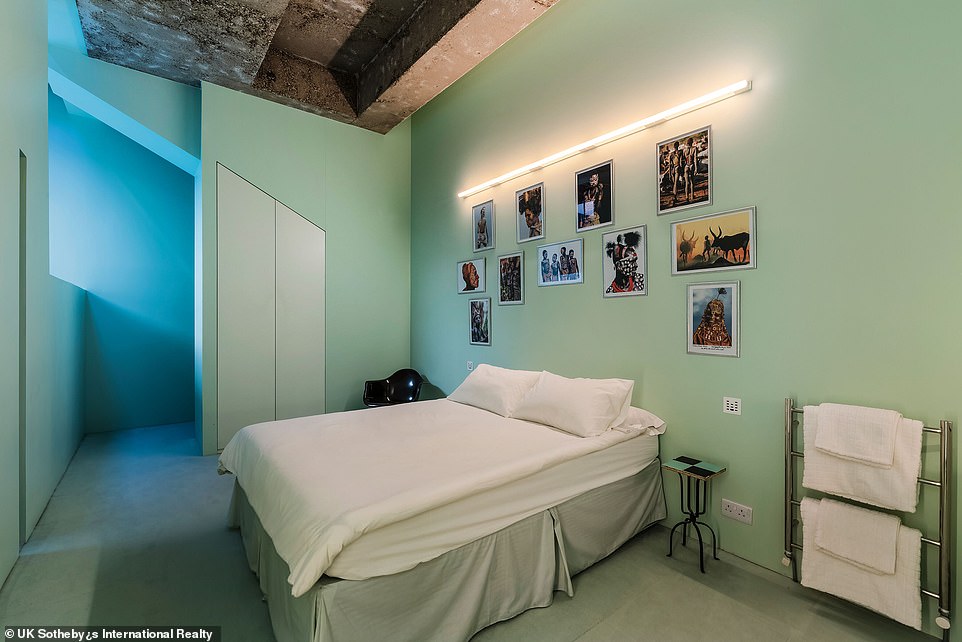 The guest room in Lost House. Bedrooms were painted in softer tones. The guestroom is a pastel green and the master bedroom is pastel pink 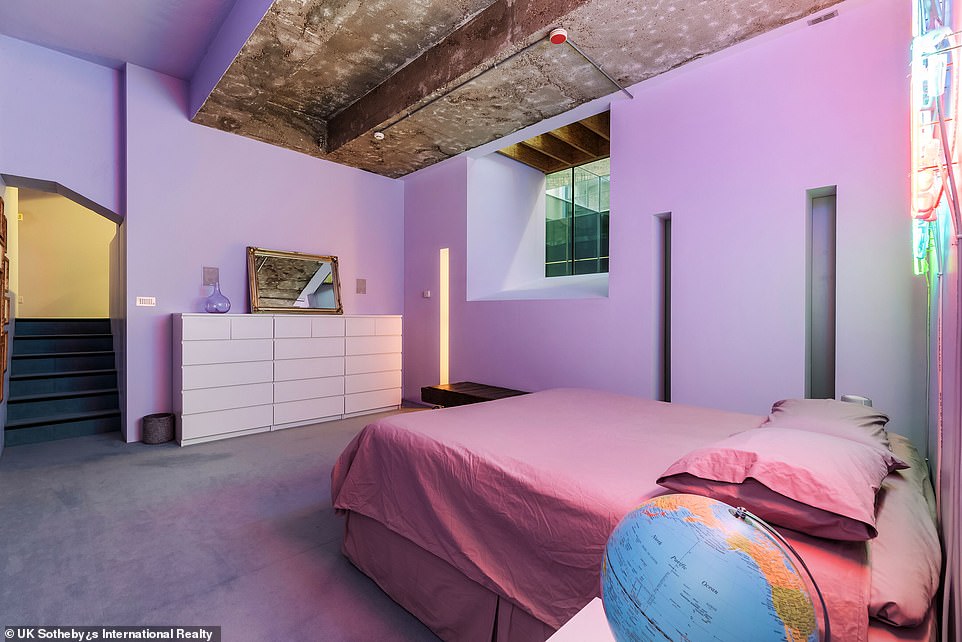 The house was used for ad campaigns by brands like Agent Provocateur, Hugo Boss, John Lewis, Rolex and Speedo