Anything goes in Will Young’s sexy Cabaret

Dirty dancing, pills, liquor and persecution: hardly the stuff of your average musical but thank goodness for that. The West End has more than enough romance and tap-dancing right now. Welcome back to decadent Thirties Berlin facing the rise of Fascism in Rufus Norris’s dark revival of Cabaret.

A slightly different show from the one he staged six years ago, it now stars Will Young in leather hotpants and a corset as the sinister MC presenting the scantily clad dancers of the Kit Kat Club. And excellent he is too, hitting the high notes with an effortless sweetness while something both scared and deeply scary keeps seeping through that baby face. Anything goes round here, as long as it’s sleazy.

In a chilling new scene, Young turns puppet-master, holding overgrown children in lederhosen at the ends of strings as they sing that deceptively innocent Aryan folk song Tomorrow Belongs To Me like automatons. 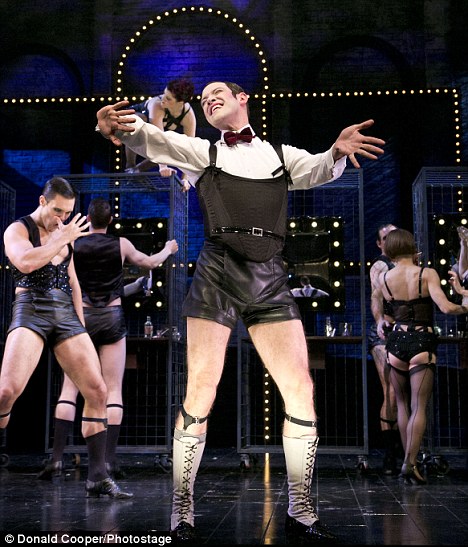 Host with the most: Will Young excels as the MC in a revival of Cabaret

In the show’s final image, the nudity (and yes, you will see Young’s bottom) is shocking as the club melts away into the yard of a concentration camp where the dancers huddle beneath the snow.

Matt Rawle is good too as the bi-sexual would-be novelist from Pennsylvania who finds himself in this hotbed of perversion and observes its final days.

However, there’s little spark between him and former EastEnder Michelle Ryan’s Sally Bowles, the sexy, gin-guzzling survivor sensationally played by Liza Minnelli in the 1972 film. Ryan’s Sally is squeaky-clean, and seemingly quite unraddled by all the sordid sex and drugs. Her performance lacks the necessary sense of irony and the emotion needed for the soulful Maybe This Time and the thrusting and bitter Cabaret. She blunts the show’s edge and makes it hard to care much about anybody.

Of course, it’s much easier turning a musical into a movie, as Cabaret was, than vice versa. Quite why anyone thought the wonderful film Finding Neverland was crying out to be made into a musical escapes me.

It’s based on Allan Knee’s play about J. M. Barrie (in the film a compelling Johnny Depp) and how his friendship with the young sons of the Llewelyn Davies family and their widowed mother Sylvia provided the inspiration for him to write Peter Pan.

This is a piece about setting the imagination alight and releasing  one’s inner child – both Barrie’s and the boys’.

Knee has written the book for this new ‘musical comedy’. Unfortunately, the show has lost its way en route to the stage, torn between drama and Disneyfication. Awkward set-pieces featuring dancing girls dressed up as roses or mermaids – and even a band of kilted lads playing bagpipes – get in the way of character development and narrative tension.

In a distinctly panto touch, the inspiration for Captain Hook has become a pompous theatre critic, Maximillian Blunt, who brandishes an umbrella with a hooked handle and runs off with Barrie’s wife.

Yet the show begins rather promisingly with Barrie (the talented Julian Ovenden) about to be made to walk the plank from a splendid ship. His crime? Boring his audiences to death. There’s also a real St Bernard dog, even if he is miserably underused.

But after that, it all runs aground. In the film, the sexless Barrie was innocently entranced by the boys and loved their mother, but not in a  conventional, romantic way. However, in the musical he is far more interested in courting Sylvia than amusing the boys. He is forever writing letters to her, which he reads out in spotlit soliloquies.

None of this would matter if the music soared, but it is bland and  forgettable. While everything about Rob Ashford’s production is lavish and proficient, it is stubbornly earthbound. Barrie’s on-stage car remains disappointingly stationary, and  my inner child was similarly left wholly unmoved.

Anne-Marie Duff is an actress blessed with extraordinary naturalness and lack of affectation. In Josie Rourke’s enthralling revival of 17th Century French playwright Racine’s tragedy-drama Berenice, she is radiant and regal but never grand in the title role of the Queen of Palestine.

Dressed in a sheath of red and gold, with a golden crown sewn into her braided hair, Berenice seems as  down-to-earth as her bare feet on the sandy floor.

She is madly in love with the Roman Emperor Titus (Stephen Campbell Moore). However, he must choose between this foreign queen that Rome would never accept and his empire, between love and duty. It’s a similar dilemma that confronted King Edward VIII in his love for Wallis Simpson.

But there’s a third person to consider. Titus’s dear friend, the slightly wet Antiochus (Dominic Rowan), is also besotted with Berenice. Should Titus decide to dump her, might he get lucky?

Duff appears to be taking her cue from Alan Hollinghurst’s elegant, restrained new version of the play. Her huge eyes are frequently filled with tears but she never breaks down. Rourke keeps things simple and calm, staging the piece strikingly in the round, in a sandpit beneath a fragile staircase.

If you don’t know this story – as I didn’t – it’s agonising edge-of-your-seat stuff  as this quietly despairing trio are torn between  following their hearts and their heads.