A blushing bride has turned heads after posing for an unforgettable series of wedding photos in the aisles of her local Woolworths.

While Mrs Taylor-Dubois and her husband Craig were married in November 2018, they had no photos from their big day.

This was because the wedding photographer they’d booked had cancelled just two hours before their ceremony.

‘I had been looking forward to our wedding for so long and booked a photographer well in advance so they would be able to capture our special day,’ Mrs Taylor-Dubois said. 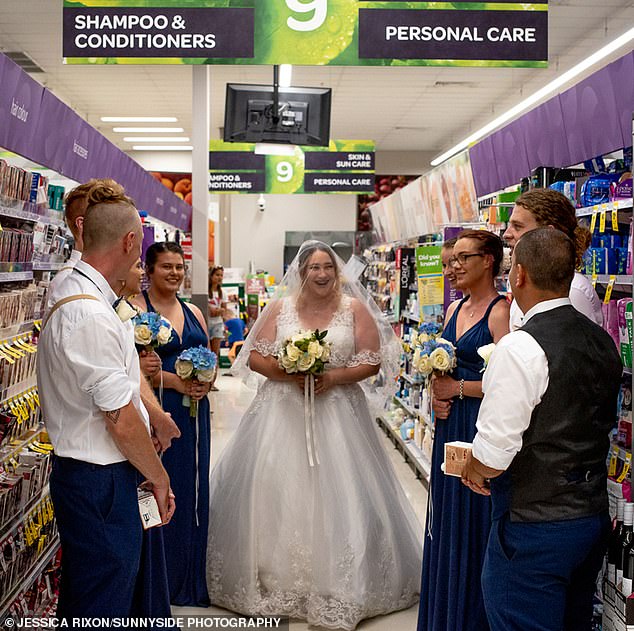 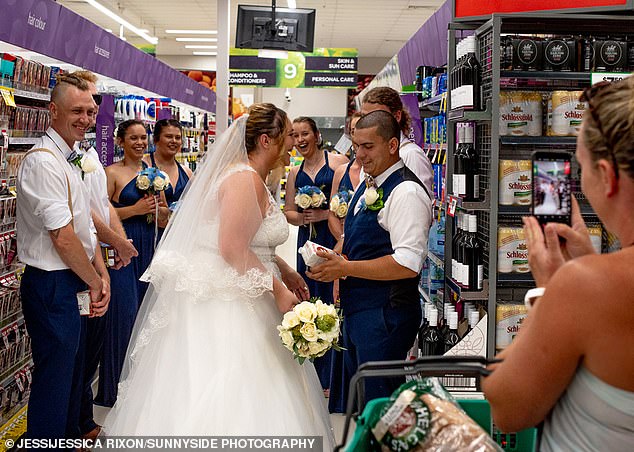 As a result, the 20-year-old mum-of-two was forced to do without a professional photographer on her wedding day – a crisis that would send most brides into complete meltdown.

Despite being ‘heartbroken and devastated’, Mrs Taylor-Dubois said she tried to remain positive and instead focused on the most important element of the day.

‘Two hours before the ceremony, they cancelled on us. I was absolutely gutted,’ she recalled. 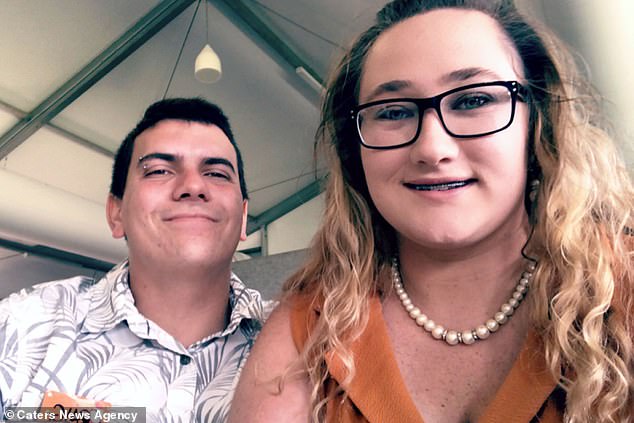 Mrs Taylor-Dubois (pictured left with her husband Craig, pictured right) was originally forced to do without a professional photographer on her big day 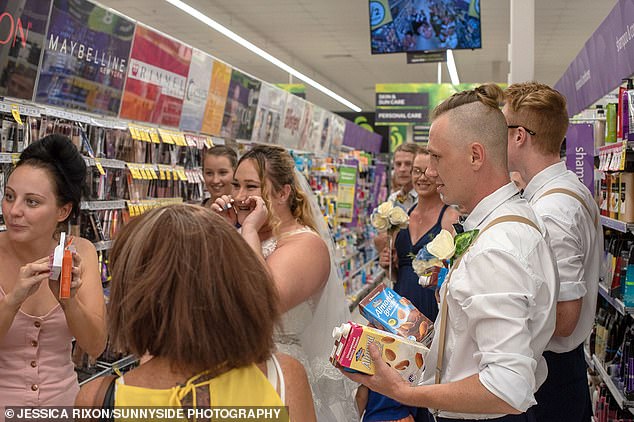 Although the couple were married in November 2018, they had no memories of the event as their original photographer had cancelled

‘We had no alternatives. It was horrible and there was nothing we could do. 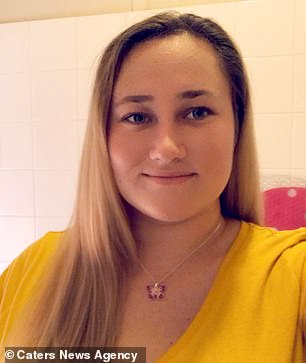 ‘It was still an amazing day, but I was very disappointed we couldn’t get the professional photographs that I had longed for.’

But an amazing turn of events would see the newlyweds offered the chance to have their dream day captured after they were approached by photographer Jessica Rixon who heard about what happened on the couple’s big day.

‘I was so touched when Jessica reached out to us,’ said Ms Taylor-Dubois. ‘It was just so incredibly kind, and we were so happy to be able to make those memories again.’ 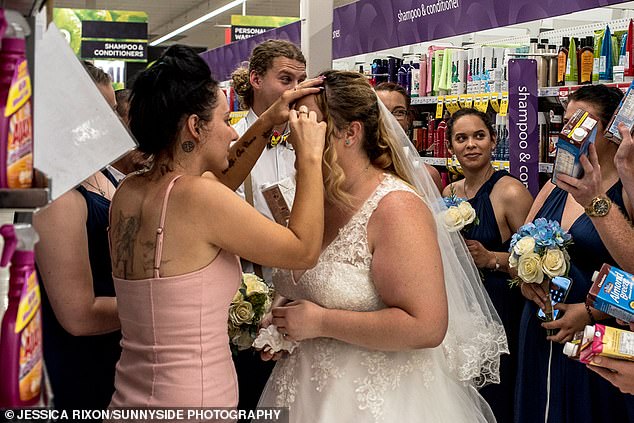 While a bright sunny January day was scheduled for the shoot, disaster would strike again, in the form of one of Ms Taylor Dubois’s fake eyelashes falling off.

But rather than let this put a dampener on things, the entire wedding party made their way to the nearby Nelson Bay Woolworths to get an urgent replacement.

As they entered the store, Ms Rixon decided it was the perfect opportunity to capture some hilarious and unique photographs of the happy couple and their wedding guests inside the supermarket. 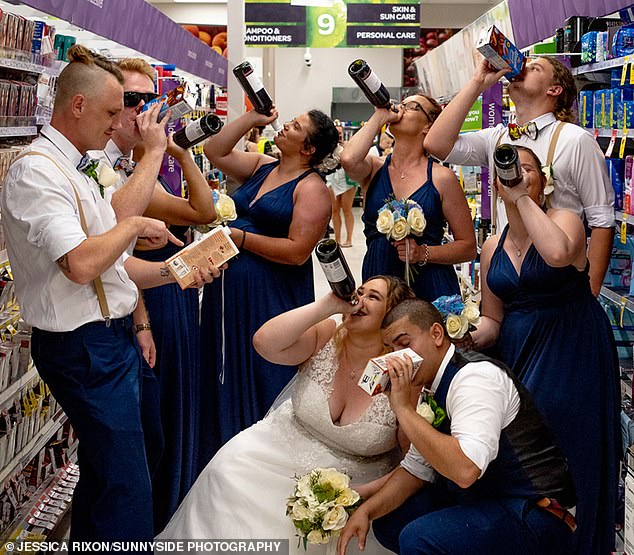 ‘There was a Woolworths supermarket close by to get a new one (eyelash), but everyone was all dressed up, and I was in my wedding dress, so I was hesitant,’ said Ms Taylor Dubois of the unusual decision.

‘As soon as we got in store, everyone was staring at us and going crazy. I guess it is not something you see every day.

‘We got completely swamped by people. They were taking photos and congratulating us.’

The supermarket also lent the couple a helping hand, allowing them to roam freely and offering to replace the missing eyelash free of charge. 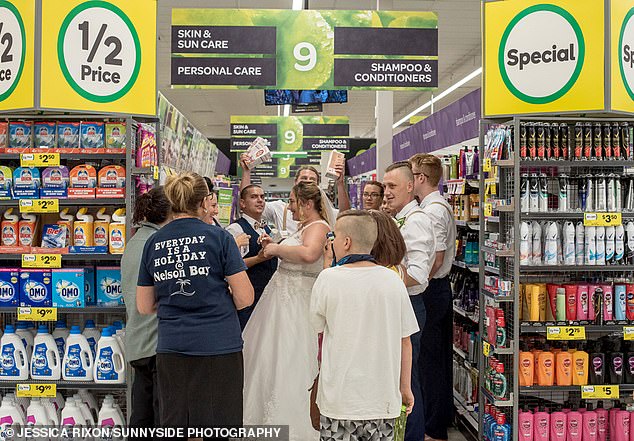 ‘We got completely swamped by people. They were taking photos and congratulating us,’ said Ms Taylor-Dubois 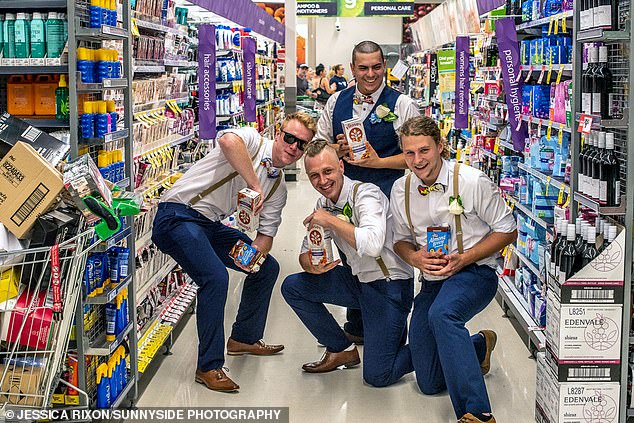 Once the couple and their bridal party got into the spirit, the photo shoot couldn’t have been more fun.

The gorgeous snaps show the couple holding various groceries they grabbed off the shelves, posing at checkouts with their bridesmaids and groomsmen, and even re-enacting their wedding ceremony by walking down the supermarket ‘aisle’.

The elated bride was ‘over the moon’ with the final photographs – and said posing inside the supermarket made their wedding even more special. 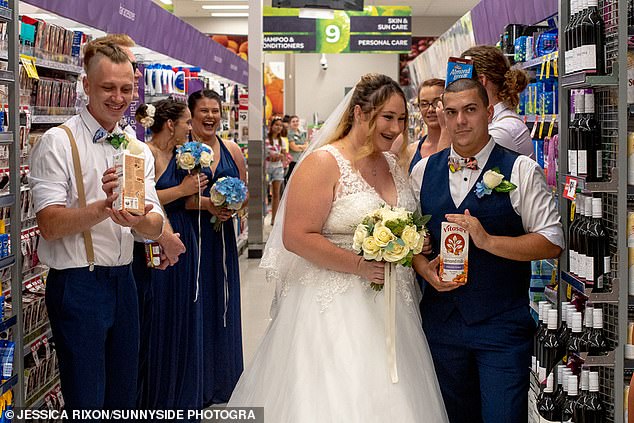 ‘I’m so glad we did the photo shoot inside Woolworths. It was an incredible experience,’ said photographer Jessica Rixon

Ms Rixon said she had been ‘more than happy’ to help the bride and her groom after she’d heard about their plight to finally create the wedding photographs that they had always wanted.

‘They are the sweetest people who are madly in love with each other. I had the best fun hanging out with them making memories that they can keep forever.

‘I’m so glad we did the photo shoot inside Woolworths. It was an incredible experience.’