Most patients can use an annual at-home colon cancer screening test instead of getting the dreaded colonoscopy, according to a new study.

Rates of colorectal cancer have been rising sharply among younger people in recent years, making screening more important than ever.

Last year, the American Cancer Society even lowered the age at which it recommends people start getting screened from 50 to 45.

Though people 55 and older have seen falling rates of the cancer thanks to more consistent screening, the standard colonoscopy test for the disease is invasive, time-consuming, costly and unpleasant – all barriers to wider screening.

At-home stool tests are a far easier sell for cancer screening, and a new study from Regenstrief Institute found that, for people without symptoms or significant risk factors for cancer, these tests are good pre-screening tools.

But experts warn that people with higher risks of the disease still need regular colonoscopies. 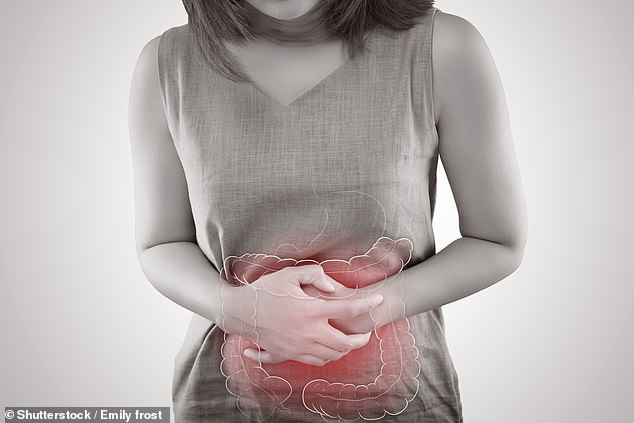 Colonoscopies are dreaded cancer screening procedures, but a new study suggests that taking an at home stool test every year is a good indicator of early signs of the disease

‘Think about how challenging it is to get everyone to get a flu shot every single year,’ says Patrice Brown, Vice President of Programs at the Colorectal Cancer Alliance who was not involved in the study.

‘Apply that to FIT test. If people get a negative result, they become complacent unless they have the navigation from a health care provider.’

Colorcectal cancer is the third deadliest form of the disease in the US, despite some progress in recent years.

Colonoscopies and awareness campaigns encouraging Americans to get the procedure are credited with driving down colorectal cancer death rates for the past 20 years.

The procedure enables doctors to spot pre-cancerous growths – called polyps – and remove them before they can become more dangerous.

Thanks to these preventative efforts, there are a million colorectal cancer survivors alive in the US today, according to the American Cancer Society.

Getting people to go through with a colonoscopy is no small feat, though.

The expensive, involved procedure requires patients to take at least one day off work for the colonoscopy itself and at least 24 hours of recovery.

Plus, there’s the hated preparation for a colonoscopy, which involves cleansing the colon for one to three days by drinking eight liters of a solution many find foul, using pills, or a combination of the two.

While people purge, they may experience diarrhea and cramping, too.

During the colonoscopy, a patient is sedated and doctors snake a tiny, flexible scope into the body via the rectum and through the colon.

It’s only about a 20 minute procedure but patients leave the hospital groggy, a bit helpless and sore. It typically takes 24 to 48 hours for life to get back to normal.

If the scope finds nothing, then a patient doesn’t have to have another colonoscopy for 10 years.

During the colonoscopy, doctors survey the tract’s landscape for polyps, which they can then remove during the procedure to prevent cancer from developing.

A tiny fecal sample is collected and placed on a card or in a test tube where it reacts with the test chemicals to show you if it is positive or negative for red blood cells.

The colonoscopy has remained the ‘gold standard’ for cancer screening, but the at-home tests have improved and, the new Regenstrief Institute study suggests they are an equally good tool for pre-screening for cancer.

To establish this, the researchers analyzed over 31 prior studies involving 120,255 participants. All of the patients involved had done a FIT stool test and later also had a colonoscopy. 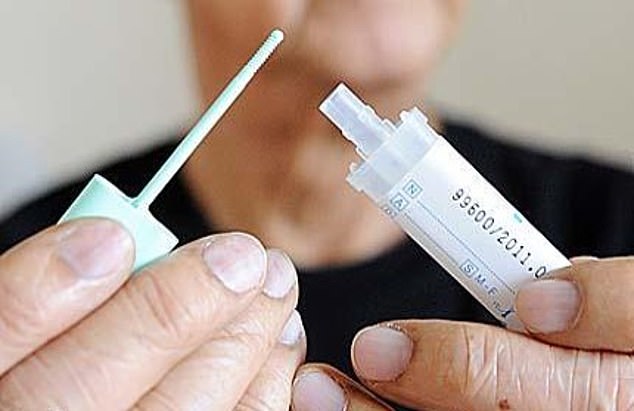 Fecal immunochemical tests (FITs) like this one just require taking a tiny sample of stool, placing it in a tube or on a card and waiting for it to react with chemicals to reveal blood (file)

When the researchers compared the two screening methods, the FIT test had a ‘high’ detection rate.

Though colonoscopy is still considered necessary for people 45 and up who are at high risk for the cancer, this suggests that, as long as a FIT test remains negative, a colonoscopy is probably not necessary.

Already in other countries, including the UK, Canada and Italy, colonoscopies are only done annually for high-risk individuals, and the FIT is the recommended screening measure for everyone else.

This saves patients a lot of money, considering that, even with insurance, the average cost of a colonoscopy in the US is $3,081, according to CostHelper.com.

The primary drawback to the FIT test is that it must be done every year – as opposed to a colonoscopy, which, if negative, doesn’t need to be performed for another 10 years – and making sure that happens could pose a challenge.

‘We need a system that is population-based rather than the current opportunistic one – with better laboratory-physician coordination, dedicated follow-up, and assurance that colonoscopy is performed if FIT results are positive,’ said study author Dr Thomas Imperiale, a Regenstrief Institute gastroenterologist.

Brown, of CCA, shares his concerns.

Many FIT tests can be ordered online without a prescription, meaning people who are uninsured or simply don’t find time to get to the doctor can get themselves screened for colorectal cancer any way.

But Brown worries that they simply won’t without being ‘navigated through the healthcare system properly’ by providers.

She adds: ‘If someone can get their FIT done annually, it should be able to detect cancer early on when it’s growing but at that point they have to go in to have a colonoscopy. But [FIT] is a good first-line.’