Forced to cancel her comedy tour due to severe sickness, it’s clear Amy Schumer is not finding pregnancy easy.

And in a preview of her new Netflix special, Growing, she jokes about women who have the perfect pregnancy- saying she hopes their cars ‘flip over’.

‘If you had a good pregnancy, like if you’re someone who enjoyed being pregnant, I just hope your car flips over,’ she said, pausing for laughter. ‘That’s what I wish for you.’ 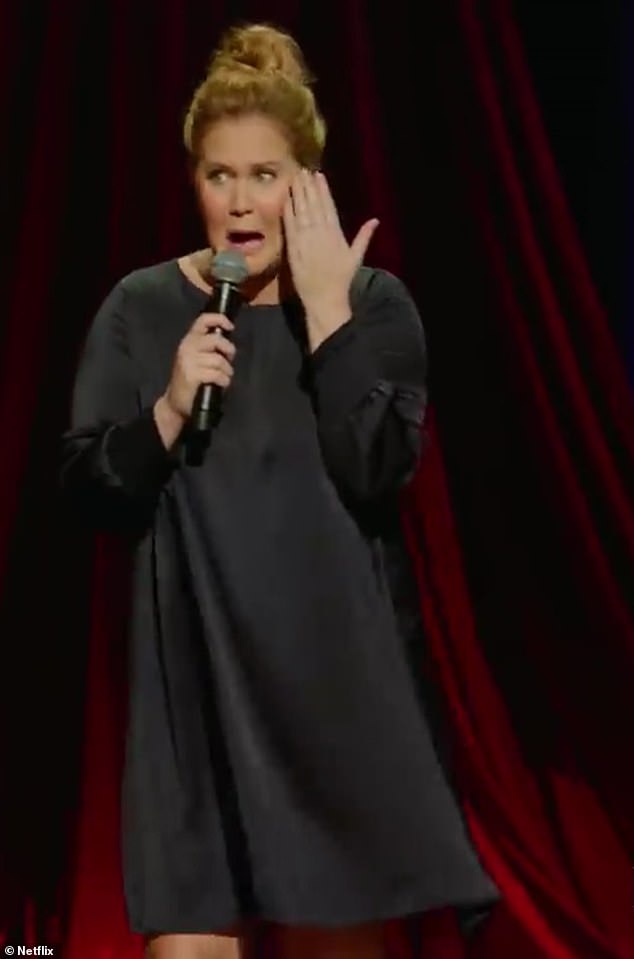 Humor: Amy Schumer jokes ‘if you enjoyed being pregnant I hope your car flips’ in new Growing Netflix special 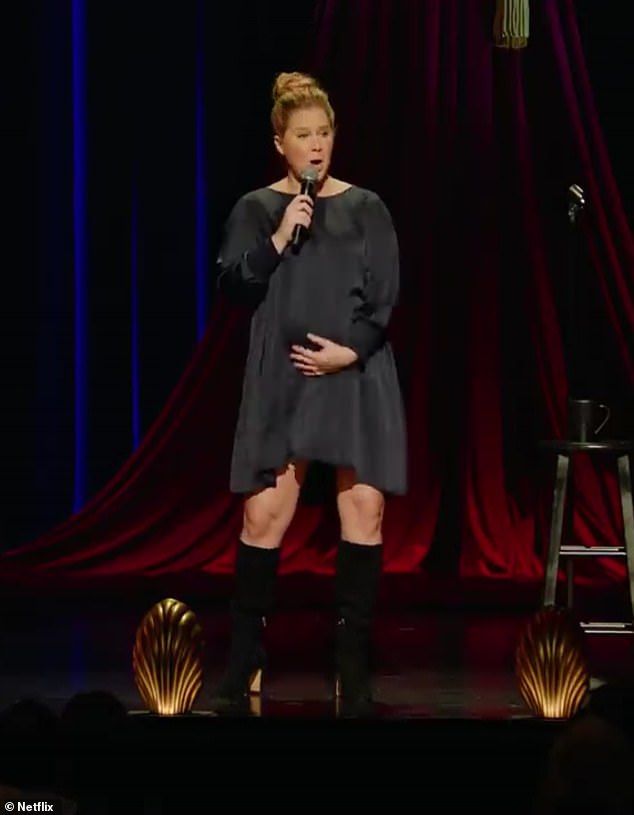 After joking about her ill wishes for other pregnant women, Amy also made fun of her pregnancy habits, pretending she was still ‘drinking’

After joking about her ill wishes for other pregnant women, Amy also made fun of her pregnancy habits, pretending she was still ‘drinking’.

She then paused for comic effect, before adding to laughter ‘Or drinking.’

In the trailer for Growing, which hits Neflix March 19, Amy also addresses her thoughts on finally getting married in her late 30s to chef Chris Fischer, saying she hopes it will mean she’s finally done with bridesmaid duty. 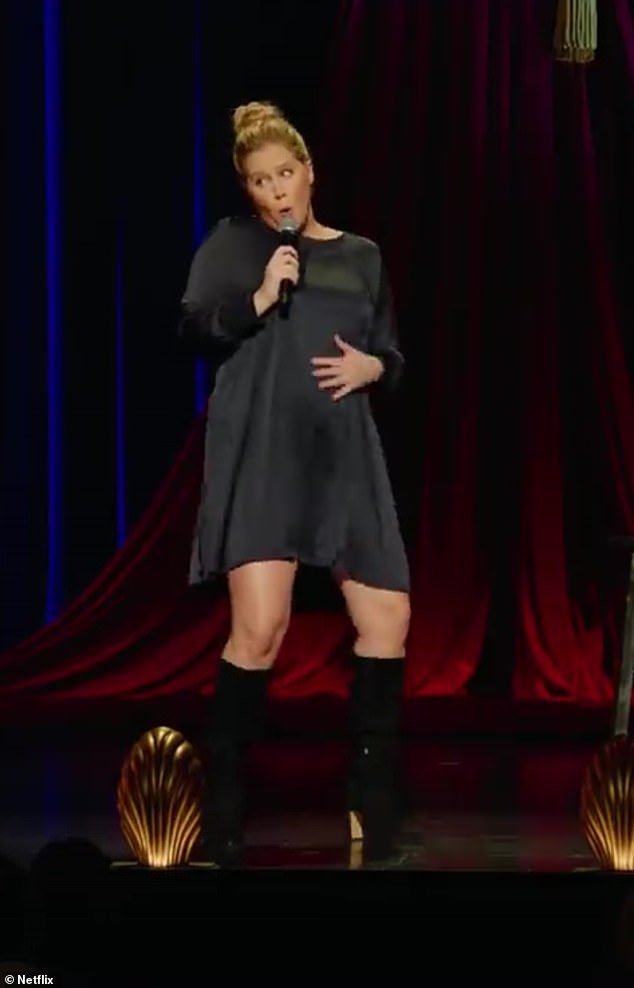 Now 38, the comedienne explained: ‘Everybody got married. I was the last one.

‘I think I don’t have to be a bridesmaid anymore. When you get to your late 30s there’s no dignity to it. It’s me in a Cocahelloa flower halo, hoping I’m not the bridesmaid with the biggest arm.’

While Amy looked happy and healthy while filming her special to a packed house in Chicago, she has since had to cancel the remainder of her comedy tour.

The 37-year-old is suffering ‘complications from hyperemesis’ during the third trimester of her pregnancy.

While for many the severe form of morning sickness clears up as their pregnancy progresses, Amy has not been so lucky. 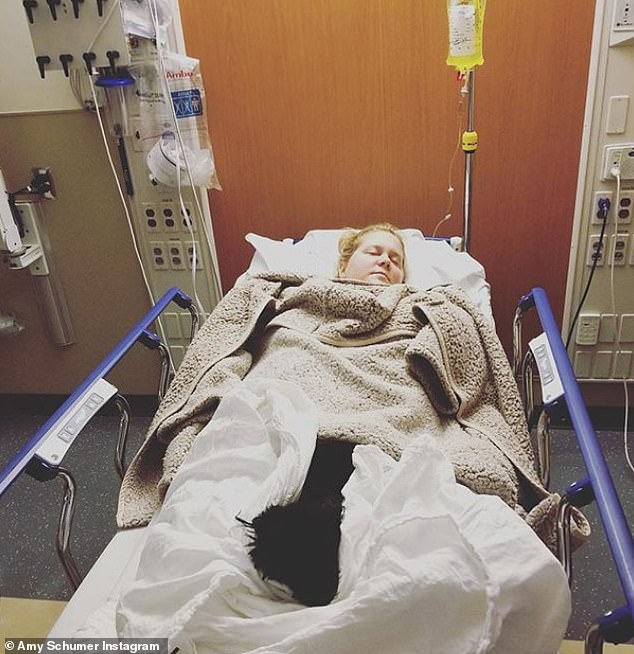 Unwell: While for many the severe form of morning sickness clears up as their pregnancy progresses, Amy has not been so lucky, sharing her struggles on social media

She wrote on Instagram: ‘Due to complications from hyperemesis I am not cleared to fly for the next couple weeks. I am going to cancel the remainder of my tour. Refunds are available at point of purchase.’

The Trainwreck star went on to assure her fans that both she and her impending arrival are ‘healthy’, but she couldn’t risk flying and performing on stage when she needs to put the wellbeing of herself and her tot first.

She continued: ‘The baby and I are healthy and everything looks good. But I am in my third trimester and I am still nauseous all the time and vomiting. I vomit mostly every time i ride in a car even for 5 minutes. 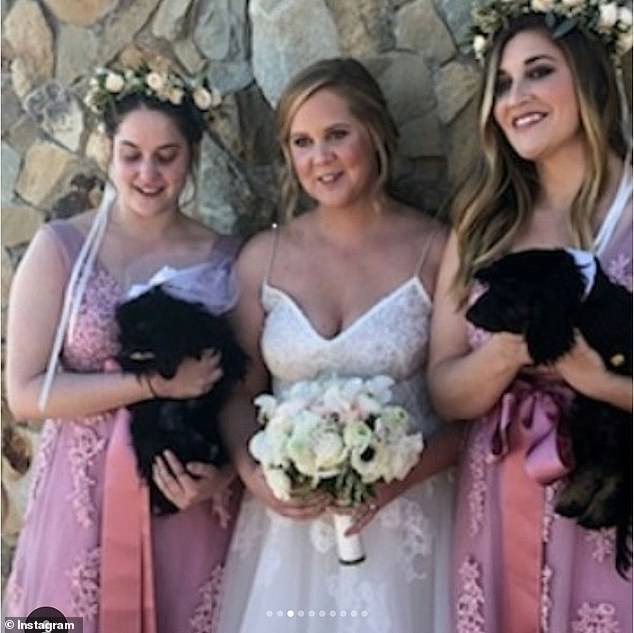 No more flower crowns: Amy joked that one of the benefits of getting older (and married) was no more bridesmaid  flower crowns; she made her own bridesmaids wear the headgear

‘I have a pretty good attitude about it and some days I feel good for a couple hours. But mostly it’s sucks. I wanted to push through and do my shows.

‘Because I hate letting people down and I love stand up and money! But more than that I have to think about my health and the baby. I know you guys get it and people are like. B***ch are you ok? Take it easy but it’s still embarrassing to have to cancel.’