A student who was taken to hospital to have stitches following a car crash was found to have a brain tumour during routine scans.

He was the only person who needed treatment to a cut on his chin. But medical staff sent him for a CT and MRI scan to check there was no internal damage.

Mr Gunby was told a five and a half centimetre tumour had been found in his brain, which could have been there for two years.

After having surgery a few days later to remove the cancerous mass, Mr Gunby said he has never taken life for granted since. 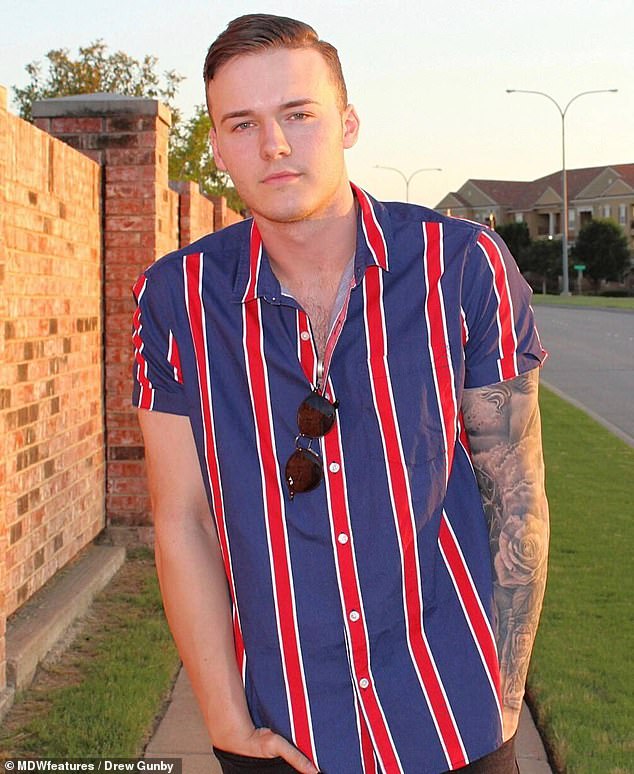 Drew Gunby, 21, from Texas, was 15 years old when he was involved in a car accident that led to a cancerous tumour being found on his brain during routine scans 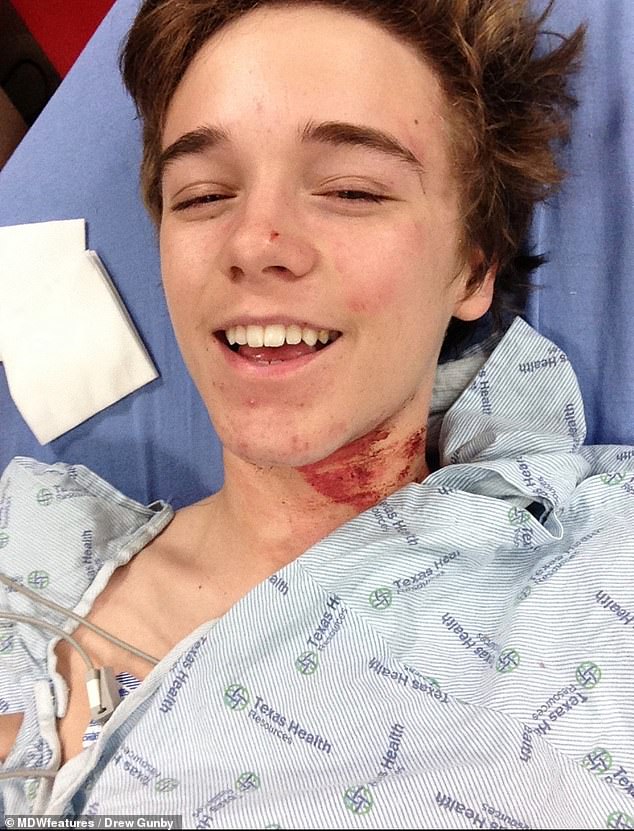 Mr Gunby, pictured aged 15 when he was waiting to have his chin stitched together after he was involved in the car accident in January 2013 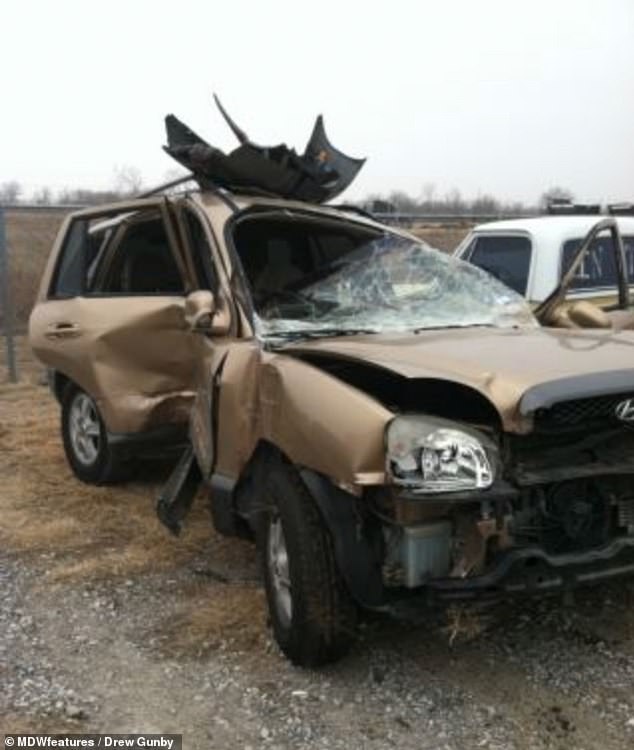 Mr Gunby was riding in a friend’s car when the driver swerved and lost control of the car, crashing into a fence. Mr Gunby flew forwards into the middle of the car

Mr Gunby said: ‘If I didn’t have that minor crash, the brain tumour would have gone unnoticed for longer, possibly not until I had a seizure to indicate a brain tumour. By then, it would’ve been much bigger.

‘It’s something I’m still processing mentally and emotionally to this day, but it opened my eyes to my morality. Life can’t be taken for granted.’

Mr Gunby was riding in a friend’s car in January 2013 when the driver swerved and lost control of the car, crashing into a fence.

Mr Gunby, who was sat in the back, flew forwards and split open his chin, requiring a trip to the nearest hospital for stitches.

WHAT ARE THE TYPES OF BRAIN TUMOURS?

A malignant brain tumour is a cancerous growth in the brain.

Brain tumours have many different types and names and are given a number from 1 to 4, known as the grade.

The higher the number, the more serious a tumour is:

Grade 1 and 2 brain tumours are non-cancerous (benign) tumours that tend to grow quite slowly.

Grade 3 and 4 brain tumours are cancerous (malignant) tumours that grow more quickly and are more difficult to treat.

Brain tumours are also called primary, which start in the brain, and secondary, which spread to the brain.

Treatments include surgery, chemotherapy and radiotherapy, and often a brain tumour will come back.

Generally for people with malignant brain tumours, around 15 per cent survive their cancer for 5 or more years after diagnosis, according to Cancer Research UK.

He said: ‘Around five minutes into the ride, the driver lost control of the car, swerving left and right, at around 50mph, crashing into a fence. I flew from the very back of the car to the middle seats.

‘The windshield was completely destroyed, and the car was totaled. I sliced my chin open and ended up going to the hospital by ambulance to get stitches. I was the only one who needed medical attention to the extent of stitches.

‘I was in a lot of pain. My chin was burning badly and my back was hurting severely. The impact of the car crash was the most physical pain I had ever endured.’

After he had stitches in his chin, Mr Gunby went in for scans to make sure there was no internal damage, such as broken bones, from the crash.

The CT scan identified a mass on Mr Gunby’s brain, and alarmed nurses sent him for a subsequent MRI scan which confirmed that the mass was a cancerous tumour.

It is not clear what type of brain tumour My Gunby had, but there are around 120 different types of brain and central nervous system (CNS) tumors.

Around 11,400 people are diagnosed with a primary brain tumour, most common in people over the age of 75, in the UK each year, according to Cancer Research UK.

Around 23,800 primary malignant brain tumours are diagnosed in the US every year, according to National Brain Tumor Society.

‘I started crying immediately,’ Mr Gunby said. ‘It was extremely scary hearing I could have a tumour in such a serious part of my body.

‘It was probably one of the few moments of weakness I allowed myself to have during this whole experience.

‘The tumour was five-and-a-half centimetres in size, and I was told I could have had it anywhere between two months and two years. There was no way of knowing though.’

After meeting with other brain surgeons, Mr Gunby chose a surgeon whom he felt a strong connection with. 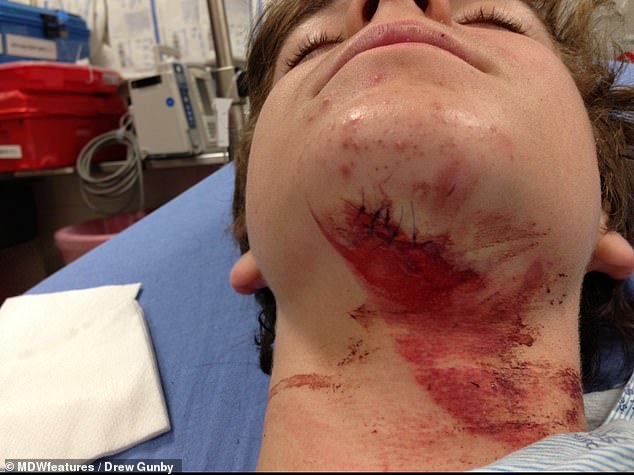 Mr Gunby said he was in a lot of pain from the incident, and he needed stiches on his chin 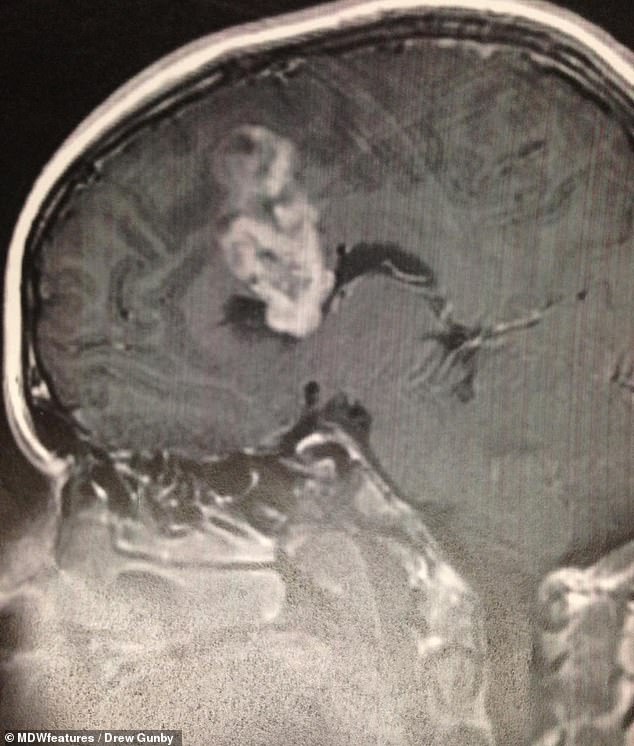 The CT scan identified a mass on Mr Gunby’s brain, and alarmed nurses sent him for a subsequent MRI scan which confirmed that the mass was a cancerous tumour 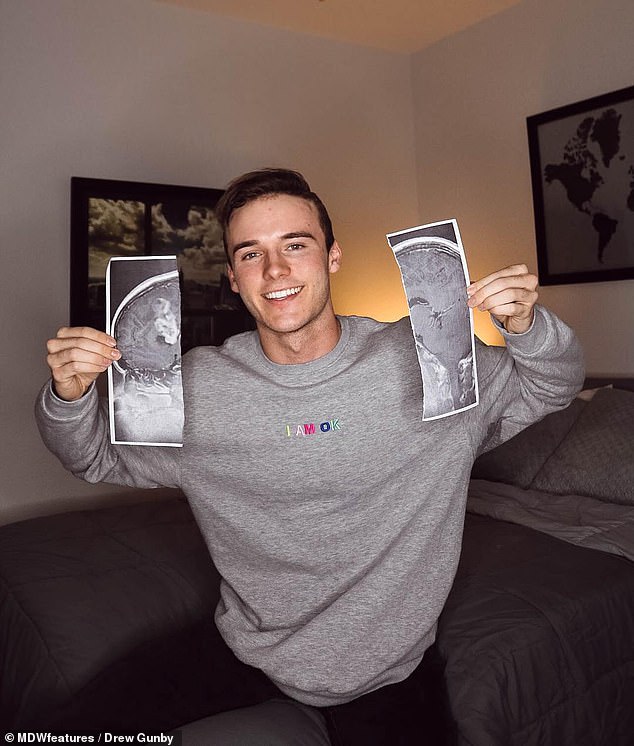 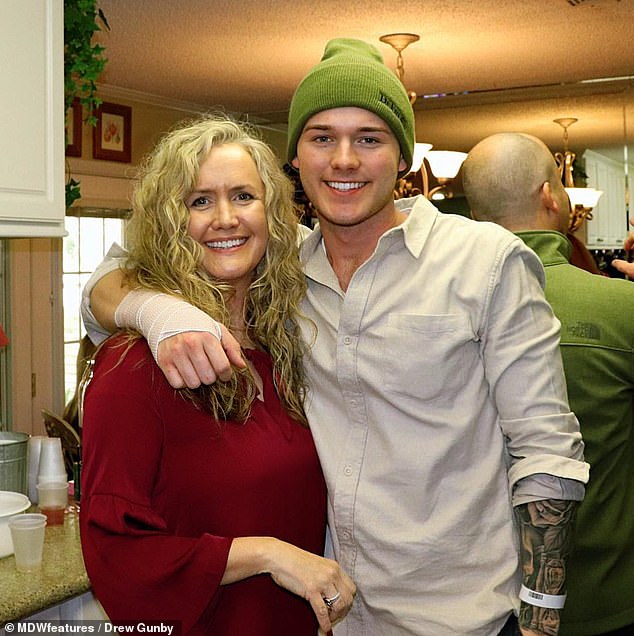 The diagnosis at such a young age completely shaped Mr Gunby’s mindset, helping him to never take anything for granted. Pictured with a family member

He said: ‘I had to decide between two different surgeons. The first wanted to do a biopsy before the surgery which would take longer, and the longer you are under for, the more likely it is for complications to occur.

‘That was a deciding factor, but also I was given a fairy doll as a funny gift from my friend who visited me. I was holding it in my hand when talking with both doctors.

‘I noticed that the first doctor would look at the fairy doll in my hand when he talked but never mentioned it. He probably thought I was an odd child.

‘Whereas, the first thing the second doctor said was “nice fairy”. Something in my heart said I should choose him, and I’m so glad I did.’

Mr Gunby’s craniotomy was on January 30, just three days after the crash which changed his life forever.

Although his recovery was difficult at the time, it was manageable and hasn’t left him with any permanent complications. He has regular MRI scans to watch his condition.

Mr Gunby said: ‘I was out of the hospital a little over a week after surgery.

‘That’s one reason I was grateful that I was so young at the time, was for recovery. Younger people recover much faster and easier.

‘I was very behind in school work, but besides that, life kept going on. I learned that no matter what happens in your life that brings you to a stop, life won’t stop for anything.’ 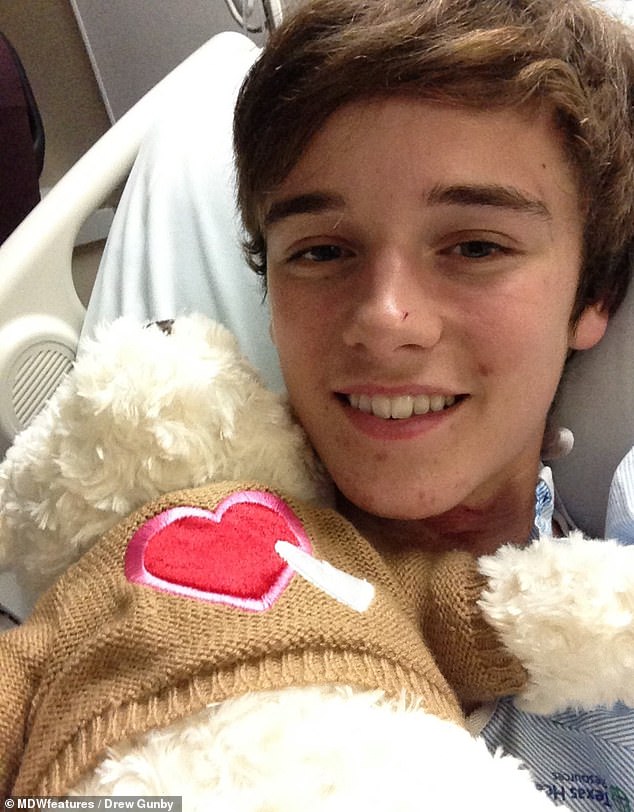 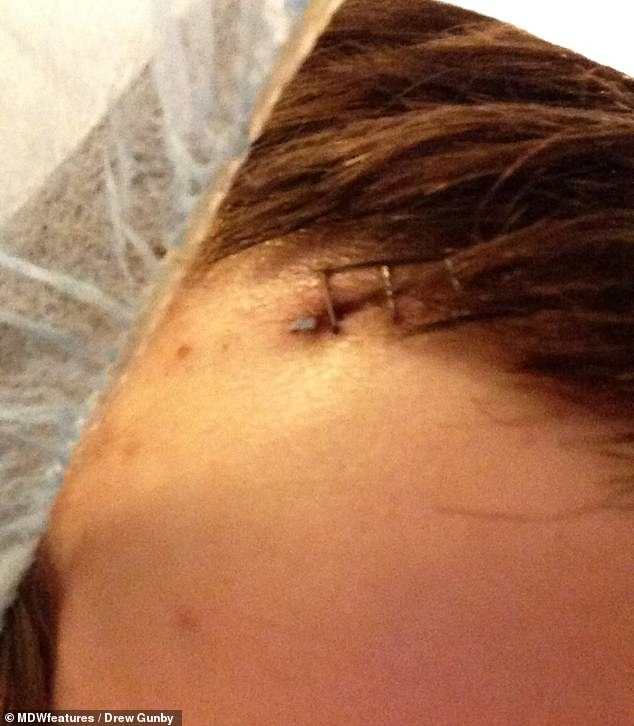 The scar from Mr Gunby’s craniotomy to remove the tumour, three days after the car crash 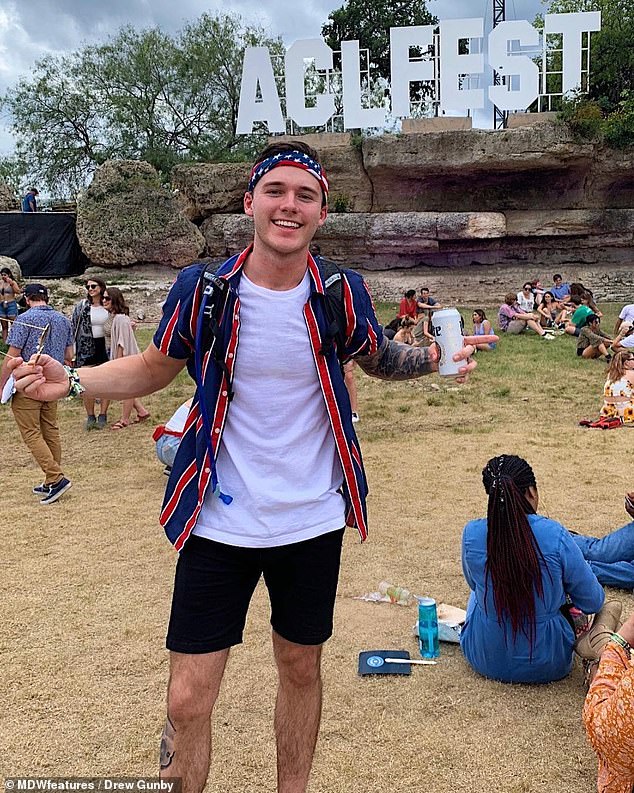 Mr Gunby said: ‘You should never take any aspect of life for granted, as it can all be gone in the blink of any eye’

Now, Mr Gunby lives with a physical scar on his chin and a hole in his brain, in addition to the emotional scars from learning that any day could be the last.

He said: ‘It has shown me that life can be taken from you at any moment, for no apparent reason.

‘I want to live everyday as if it’s my last, and if I have several days where I ask myself “if today was your last day, did you do what you wanted to do?” and the answer is no, I know I must change it.

‘I no longer seek to find a job that makes me the most money as there are plenty of miserable people with millions in their bank accounts.

‘I seek to find my passion and do that for the rest of my life, even if it means not having as nice materials as others.

‘You should never take any aspect of life for granted, as it can all be gone in the blink of any eye.’

You can see more of Drew’s story by visiting his YouTube channel.