About 95 percent of Oregon anti-vaxx parents print their own exemption certificate from the state government website.

Oregon is one of 17 US states that allows exemptions for religious, philosophical and/or personal beliefs.

Of the 31,500 non-medical vaccine exemptions filed in 2018, about 30,000 were done from parents who watched an online education module and printed a certificate of completion, reported Kaiser Health News.

Not even 2,000 parents partook in the second option, which is to talk to a healthcare provide and have him or her sign a vaccine education form. 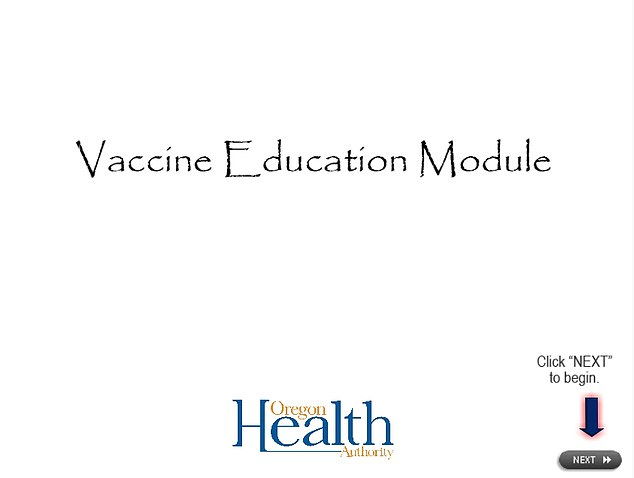 Of the 31,500 non-medical vaccine exemptions filed in Oregon in 2018, about 30,000 were from parents who watched an online module and printed their own certificate of completion. Pictured: The beginning of Oregon Health Authority’s online education module

In Oregon, nearly eight percent of children were exempt from getting vaccines required for kindergarten for the 2017-18 school year.

However, he says he’s worried because unvaccinated children can become infected with – and spread – communicable diseases like measles.

On Monday, the Centers for Disease Control and Prevention reported that 387 cases have been confirmed this year, surpassing the count for all of 2018, which was 372.

The 2019 tally is the second-highest since measles was considered to be eradicated in 2000, putting this year on track to beat the record-high of 667 cases in 2014.

One of those outbreaks has been clustered in Clark County, Washington, an anti-vaccination ‘hotspot’ that borders Portland.

Of the 73 people affected in Clark County, 63 of the cases are in residents who have not been vaccinated. Fifty-three cases are in children aged 10 and under.

The highly infectious disease has been spreading mostly among people who are unvaccinated or live in states that allow non-medical exemptions for vaccines.

‘The ease of exemption is a big predictor,’ said Dr Omer.

However, experts say that making it more difficult to obtain exemptions will drive down rates of unvaccinated children.

Of the 17 states that allow non-medical exemptions, only Michigan and Washington require parents to speak with a practitioner.

In 2015, Michigan officials enacted a rule that parents who wanted a vaccine waiver had to partake in an education session in person with a county health educator.

Lynn Sutfin, a spokeswoman for the Michigan Department of Health and Human Services, told Kaiser Health that vaccine waiver rates have since fallen from 4.8 percent in 2014 to 3.6 percent in 2017.

Dr Omer said he thinks eliminating the online module and requiring parents to be counseled by a physician would help drive down exemption rates.

A bill has recently been presented in Oregon’s Congress that would ban all non-medical exemptions for vaccine, including religious reasons.

Several residents held a rally on Saturday to show their opposition for the bill, claiming that the state is trying to exert overreaching power.

Mother-of-two Carrie Miller, who was at the protest, told KTVL that her seven-year-old daughter Riley has not been vaccinated since she was an infant and believes it’s kept her healthier.

‘Where there is risk there has to be choice. That is how medicine works and that’s how the world works,’ Miller said.